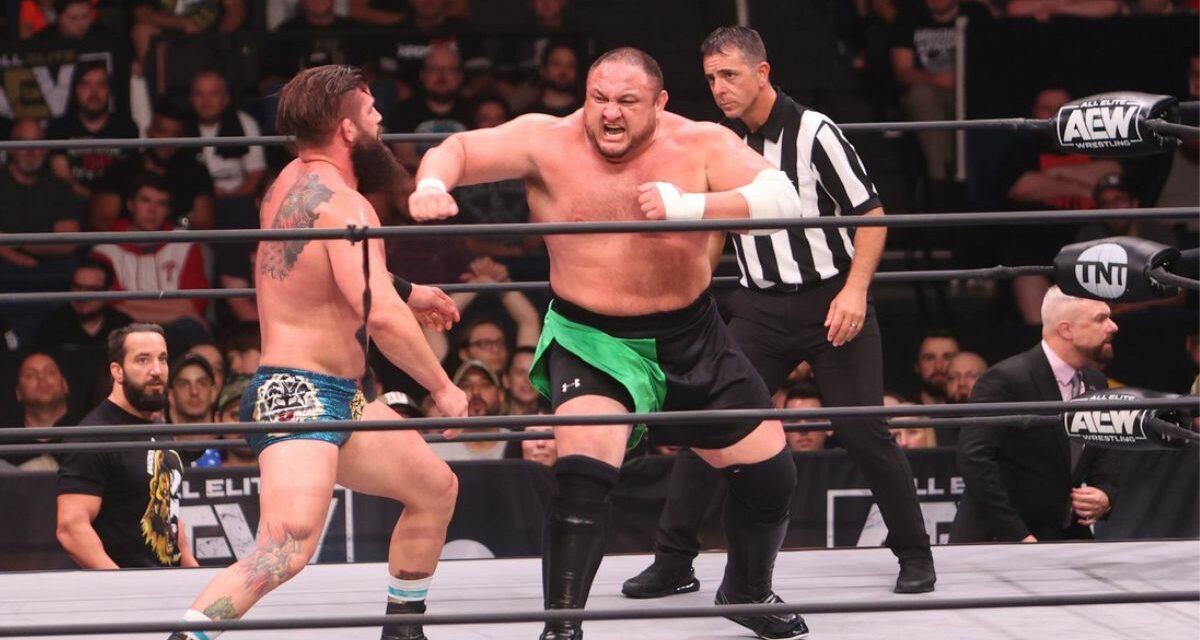 It’s Friday Night, and you know what that means? No, not to come off a suspension (we’re not there yet!). It’s time for AEW Rampage, and the Ring of Honor Television champion Samoa Joe is ready to put up his title in Albany against the Technical Beast, Josh Woods.  Joe has been a dominant champion, but he could face his biggest test yet in Woods in the main event, especially if his cohorts “Smart” Mark Sterling and Tony Nese get involved early in the match.

We’re coming to you from the MVP Arena in Albany, NY. Excalibur, Chris Jericho, Tony Schiavone, and Jim Ross have the call for our First Match of the night…

Allin is coming off his loss to Guevara last week in the title tournament, and now wants to get back to his winning ways.  There’s a handshake of respect, and some nice chain wrestling as both men go through a feeling out process early in the match.  Hardy with a shoulder tackle, and he calls for Allin to be deleted, but he returns with a crucifix driver for a two count.  Allin goes for a tope, but Hardy cuts him off with a forearm.  He attempts a Twist of Fate on the floor, but Allin shoves him into the steel steps.  He props Hardy, with his upper torso on the ring apron, and he goes up to turn buckle.  He taunts Hardy with his hand gesture and attempts a Swanton, but Hardy moves and Allin connects on the hard part of the ring apron. 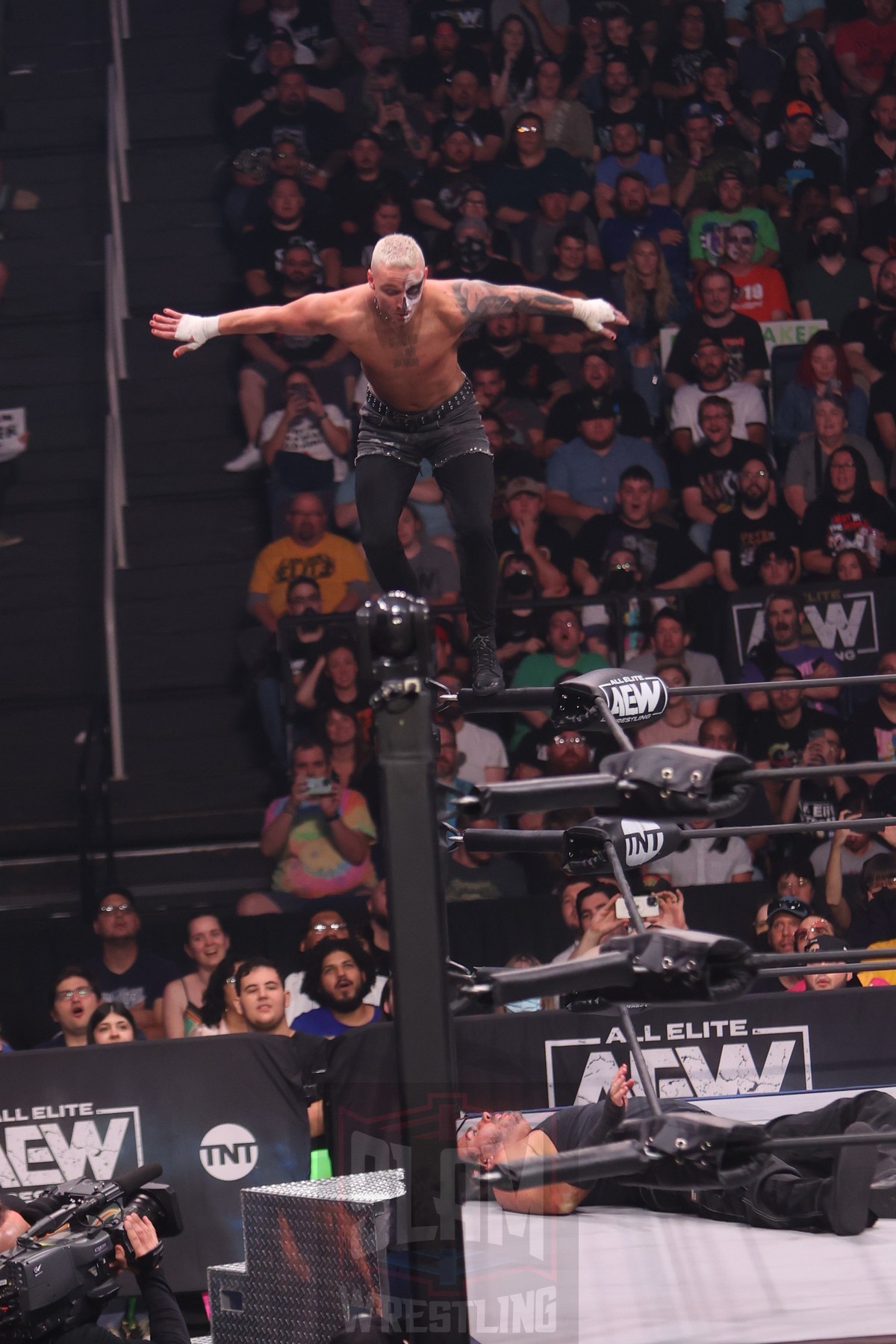 Darby Allin takes to the air at AEW Rampage, taping at MVP Arena in Albany, New York, on Wednesday, September 14, 2022, and airing on Friday, September 16, 2022. Photo by George Tahinos, georgetahinos.smugmug.com

Hardy takes advantage and goes to ramming his back to the ring post, then stretching his spine on said post.  During Picture in Picture, Hardy continues working his lower back to further exploit that weakness.  He whips Allin hard into the corner and then pulls away with a powerbomb for a two count.  Hardy goes back to attack, but Allin nails a back elbow.  He’s still hurting and can’t quite capitalize, especially when he rams Hardy in corner and feels the effects.  Allin rushes the corner and Hardy catches him in a Side Effect for another two count.  Hardy attempts the Twist of Fate, but Allin reverses to a backslider for a two count.  Hardy gets a suplex, but Allin reverses on the way down to a Scorpion Death Drop.  Allin goes for the Coffin Drop, but Hardy catches him and connects with a Razor’s Edge for another two count.  Hardy goes for a moonsault that misses, but Allin connects with a Code Red for a two count and then pulls Hardy’s leg to quickly transition for The Last Supper for the three count and the win

Your Winner via Pinfall:  Darby Allin.

Both men shake hands in a sign of respect, and Allin heads to the back, while Hardy basks in the glory.  All of a sudden, the Arena goes dark, and now Julia Hart and Brody King appear in the ring and attack Hardy. King gets a mic and wants Sting and Allin to come out.  As both men come from the back, King states that even though Malakai Black is gone, they aren’t done by a mile.  King challenges both men to face The House of Black in a no-DQ match next week for AEW Gland Slam week, and then they choke out Hardy to send a message, specifically to Allin who was incapacitated by King in a similar fashion.

Eddie Kingston calls out Guevara. He doesn’t hate him for the spotlights or the vlogs, and the ways he calls attention to himself.  Nah, he just hates him because he’s a garbage human being, and he promises to beat the piss outta him in Queens.

So, okay…someone’s suspension is coming to an end.

Now we have the ROH World Champion, Claudio Castagnoli, in the ring with Wheeler Yuta. Puts over Blackpool Combat Club and points out they are the dominant faction in wrestling today. Even though Bryan Danielson and Jon Moxley will face each other in the AEW Title tournament next week, Castagnoli predicts there will be two world champions in the ranks of the Blackpool Combat Club. 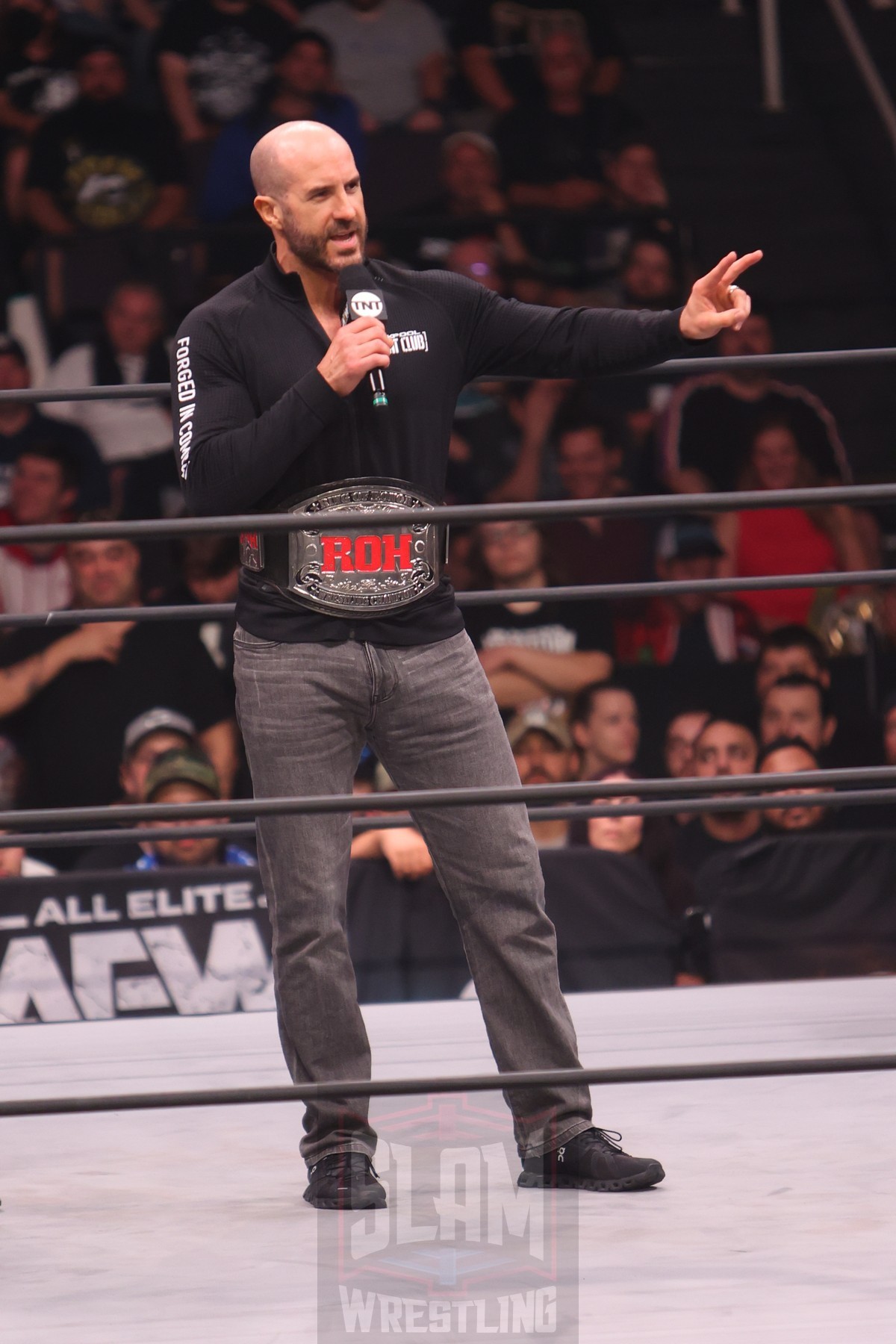 That brings Jericho on the stick, and he reminds Castagnoli and everyone in attendance about the Jericho Appreciation Society is also a dominant force in sports entertainment. He even mentions he is a seven-time world champion in various promotions, but never in Ring of Honor. Jericho challenges Castagnoli for a title shot because he’s “going for The Ocho” on AEW Dynamite next week.  Castagnoli accepts, and this will be a battle without honor, folks.

Lexy Nair is backstage with Jade Cargill and The Baddies.  She comments on how Cargill has run through the roster of challengers for her TBS championship, and Cargill says there’s been too much winning, and the streak will continue on. Now, Diamante(!) comes into the camera shot and suggests she’ll roll up next week to face Cargill in Queens with the OG Baddest Bitch.

Is it me, or did everyone else also forget that Diamante was still on the roster?

Well, let’s head to the next match of the night…

The fans are really responding to Nightingale, and I firmly believe she is the female answer to Colt Cabana.  She’s just having fun outmaneuvering Ford, who’s growing frustrated by her in-ring antics.  Nightingale goes for The Pounce, but Ford puts on brakes and then nails a dropkick to her back, followed by double knees to her chest.  During Picture in Picture, Ford is in control adding insult to injury. Nightingale tries to get back on track, but Ford is a step ahead and gets her in a surfboard stretch to…

We come back and Nightingale is back in the driver’s seat (which would’ve been great to know how that happened.  Maybe if they had the Picture playing on another Picture on the television screen would be a great idea.  But what do I know, except HOW TV COMMERCIALS REALLY INTERRUPT THE FLOW OF A WRESTLING MATCH THAT ACTUALLY LOOKS INTERESTING!!)

Your Winner via Submission:  Penelope Ford

Lexy Nair is now with The Dark Order. Page apologizes for dropping the ball during the Trios title match, but The Dark Order forgive him again. Jose the Assistant and Rush come out to taunt their loss.  Rush says something in Spanish, and they’re perplexed what it means.

My Spanish is rusty, but it translates to, “I’ll see you in the ring.”

Danhausen threatens to curse Page but…nope.  He probably should have done it to avoid this squash, but that gives me the chance for a Haiku in Review™:

The Hard way. Ego is just 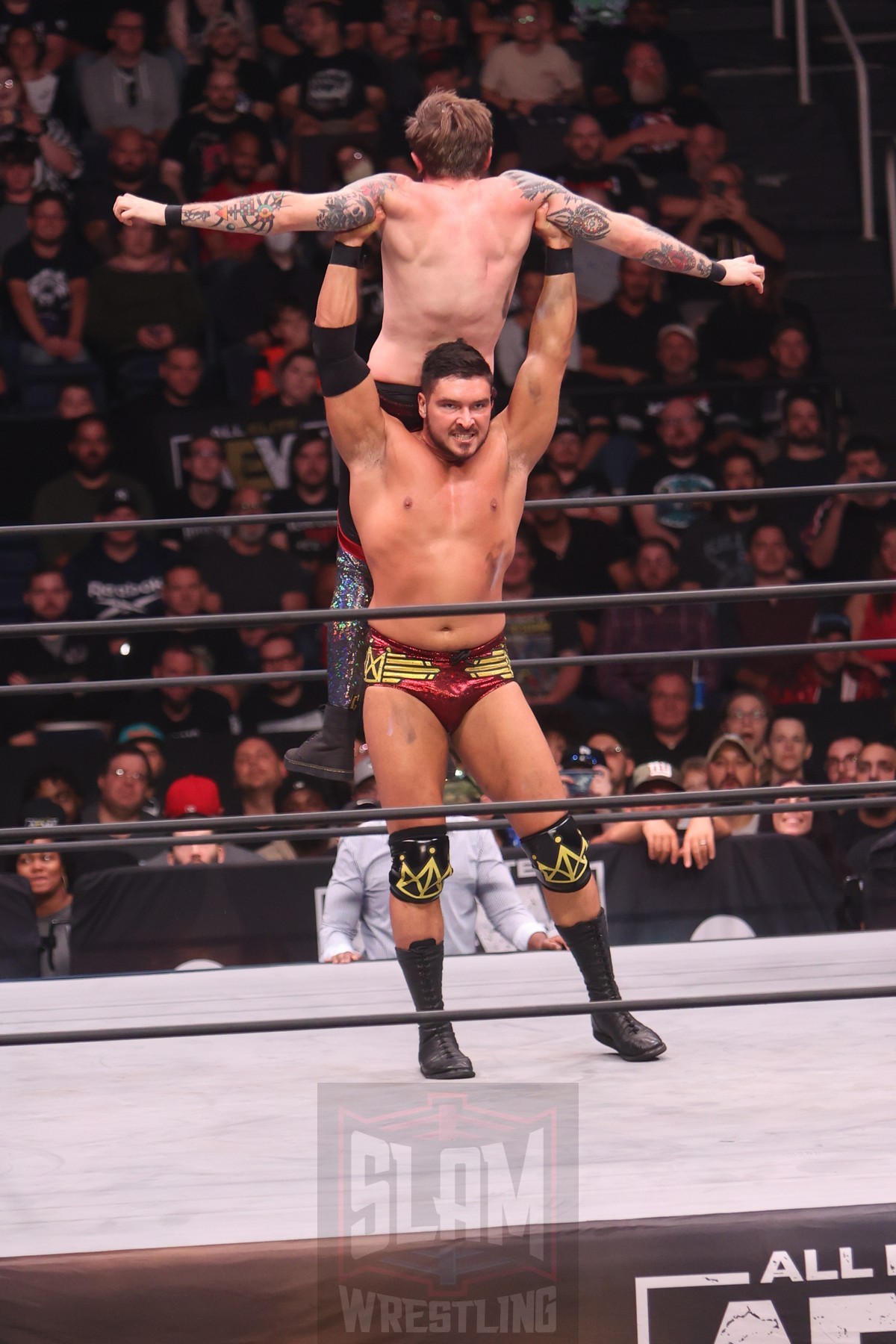 Your Winner via Pinfall:  Ethan Page

Ricky Starks cuts a promo and says Powerhouse Hobbs has his full attention and he will see him in New York City next week.

Mark Henry Has Samoa Joe and Josh Woods for final words before the main event. Woods gives props to Joe for influencing his ring style and promises to give him a fight.  Now “Smart” Mark Sterling says the fans will get a fighting champ, and Sterling states Joe’s vacation will be an extended one. Joe scoffs and says his vacation was just a reprieve for guys like Woods.  He states that after tonight, there will be a clear, concise agreement on who is the champ.

As the Code of Honor is observed and the fans start into chants of “Joe is gonna kill you!”, both men tie up and Woods tries to use technical savvy, but the pure power of Joe makes this an even match.  They trade blows and then Joe jabs away. Woods comes back with knees to Joe’s head, but Joe sends him out of the ring to regroup with Sterling, who’s getting in the ref’s grill.  As he provides the distraction, Nese gets on the ring apron and yanks down on Joe’s taped arm on the top rope.  Woods comes back in and begins to target his injured wing during Picture in Picture, and he utilizes variations of the hammerlock to weaken the Samoan submission machine, but Joe fights up and goes back to jabs.

Woods takes him down with another hammerlock, but Joe fights back with his patented chop to the back and a kick to the chest.  He goes to follow up and Woods traps him with an armbar, but Joe keeps it blocked and rolls through to a pin attempt for a two count.  Woods hits the ropes and Joe quickly goes for the Coquina Clutch, but he reverses to a belly-to-back suplex for another two count.  Joe comes back with his signature inverted atomic drop followed by a running single-leg dropkick and finally a running senton.  Woods tries to go back to weakening his arm, and Joe comes back with a powerslam for a two count.  He sets Woods on the top turnbuckle for a muscle buster, and Sterling gets back on the ring apron again to interfere. Woods picks up Joe in a fireman’s carry and rotates him around to drill his knee to the side of the champ’s head.  He covers Joe for one, two…just gets a two count.  Joe back to the corner, and Woods rushes but gets an STJoe for his troubles.  Now Joe gets Woods primed and he delivers the Musclebuster to cover for the one, two, and three.

After the match, Joe celebrates with the fans, but it’s cut short as Nese, and Woods blindside him. Before more damage can be done, the TNT Champion Wardlow comes out to join the. Sterling is trapped by Joe before he can escape and Wardlow tunes up the symphony, but Nese pulls him away before he can hit the percussion. Wardlow and Joe have a stare down, which turns into a show of respect as the champs tap their respective belts and celebrate with fans. 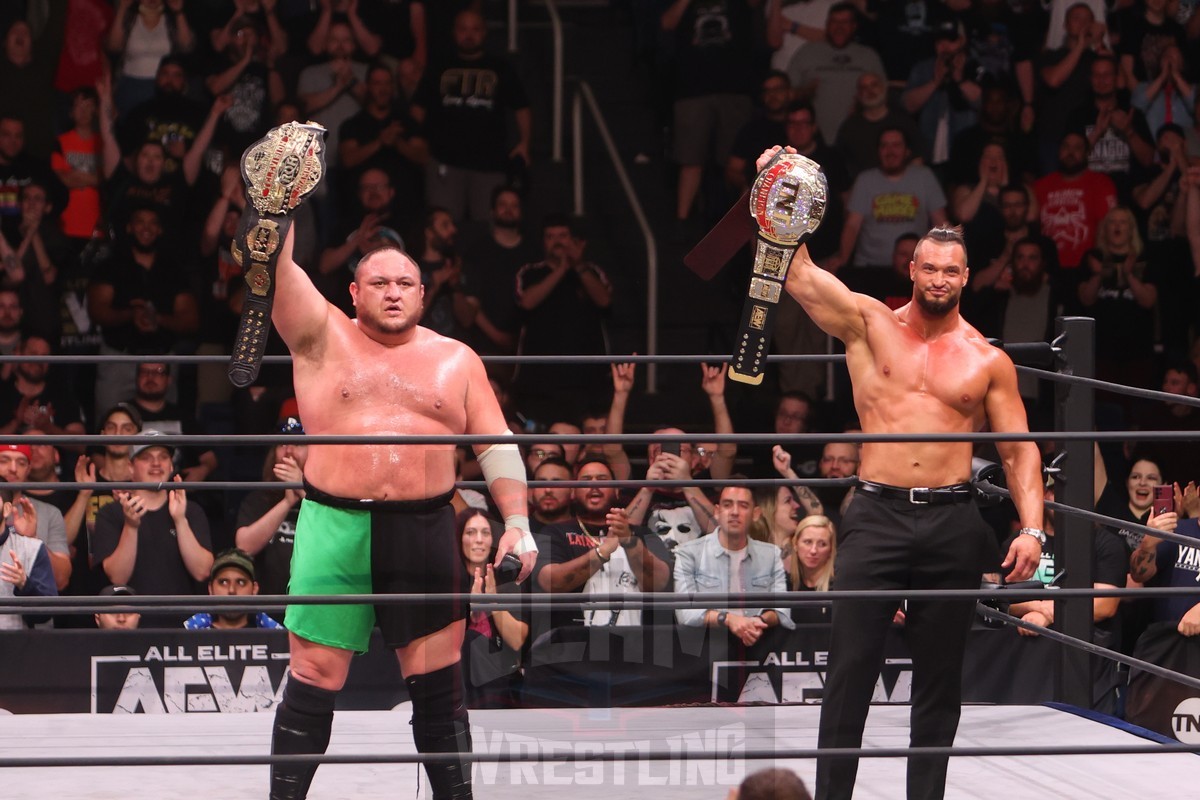 Before we head out, Excalibur notes that Tony Khan made it official that Wardlow and Joe will be in tag action next Rampage against Nese and Woods.  So you got something to you forward to as the show fades to black.

Joe and Woods had a fantastic match, and Woods really had a great opportunity to display his technical wizardry.  Hardy and Allin was a great showcase that led to another layer of the feud between Allin/Sting versus the House of Black.  Ford and Nightingale are underrated in the AEW Women’s division and I hope that changes sooner than later.

Danhausen is just…I don’t know.  He doesn’t do it for me since coming to AEW.  Anyone else feel this way?  Send me an email because I just wanna be certain I’m not alone in this.

But for now, we’ll (maybe) see you in seven (depending on if I get tickets to WWE Smackdown).