SmackDown: A Battle of the Pauls 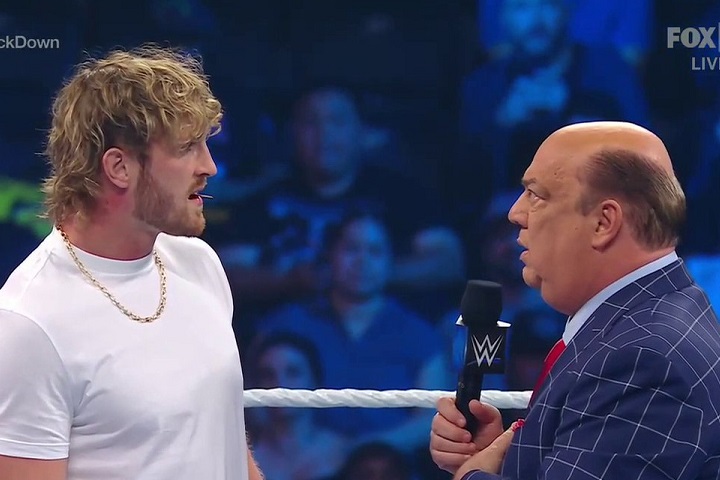 I don’t know how I’ve been cursed this badly for Logan Paul to be the first one to show up in the ring tonight. I got a notification saying he’ll be here, unfortunately, tainting the stage. Just wow.

I think he’s worse than Heyman, and that’s saying way too much. Surprisingly, Heyman is back on SmackDown, and I was actually smiling. Me, smiling for the weasel, the embodiment of a snake and the actions of a rat. I am both appalled and excited. Arg! It was a Battle of the Pauls.

As we move on from my need to flame such a poor excuse of an athlete, Logan, he picks a fight with Roman Reigns, so he could arrive at a press conference being held tomorrow in Las Vegas then hints a challenge for the Undisputed Championship. A bunch of what ifs.

Logan and Heyman chat in the ring about his challenge. Heyman gets frustrated and calls in Solo Sikoa. Sami steps in and calms things down. Logan did shock me by punching Zayn in the throat after Sami attempted to deescalate things. I laughed more than I should have. What made me angry was that after Logan knocked Sami, then the Usos and Solo Sikoa charged in. Ricochet came out to even the odds.

I was like “Let him [Logan] drown, don’t save him,” And since Rico is here, he’s up next in a matchup against his former Intercontinental opponent. Rico couldn’t make a homeboy out of someone else? Anyone else?

Ricochet’s moonsault is countered by Sami quickly as he puts his knees up.

The high-flying performer Ricochet does a backflip on Zayn’s chest before delivering a kick to his face. Rico has Zayn where he wants him until Jimmy distracts the referee giving Sami time to ThunderBomb Rico, yet the official was once again caught by another interference known as Logan Paul.

Ricochet has Sami on his shoulders, yet he catches Jey on the apron, destabilizing himself as Sami rolls Ricoo up.

Sami had Rico on his back for a count thinking this would grant him a win after so many losses, so to his dismay, Jey was the one who slid into the ring to what was believed to intercept Logan from doing the same, but that cost Zayn the victory instead.

That unravels a nerve in Sami as he exits the ring to butt  heads with Jey.

Ricochet takes that opening to splash the twins and Zayn. He drags Sami back into the mat to perform a Shooting Star for the win.

Kross cuts a promo. Drew McIntyre may be the self-appointed Chosen One, but Kross isn’t afraid, rather he relishes it, to take McIntyre down knowing he can break the man apart in more ways than just bones. His morals and spirit.

And speaking of spirit, Braun Strowman bulldozes a Maximum Male Models’ back-to-school runway showing because I suspect he was bored. As was I. Strowman wasn’t the only out here making a cracking appearance. Alpha Academy has beef with Strowman anyway, so Otis takes Strowman down… at least for the moment.

Chad Gable instructs Otis to cease his onslaught on Braun and leave, yet that powerbomb wasn’t enough to put Braun down for good. Braun is up and challenging Alpha Academy on.

Raquel shows her power and her need for revenge for what happened to Aliyah. She has Bayley on the run early on. Sky and Kai tried interfering but they quickly get flattened by Rodriguez.

Raquel spins Bayley around then plants her on the mat before attempting for a cover that ultimately fails. Bayley does gain momentum as she drives Rodriguez outside the ring completely whipped.

Bayley has Rodriguez tangled in the turnbuckles, so she could rush in with a boot to Raquel’s knee, injuring it.

Rodriguez picks up Dakota, slams her on Bayley and splashes them both.

The referee doesn’t see Iyo raking and choking Raquel which allows Bayley to score the win. It’s unfortunate, really. Raquel had it locked.

Backstage, Kayla Braxton has an interview with Ronda Rousey, but it doesn’t last long as Liv Morgan comes in. She wants an Extreme Rules match with Rousey three weeks from tomorrow since this is the only way she’ll get respect from Rousey. Ronda says it will be Morgan’s funeral.

Solo says that Jey lost his edge during their altercation with Logan Paul earlier tonight, so he asks Sami to accompany him to the stage. My mind was blown for something other than Zayn’s ugly ass dancing. Lord.

Sikoa has the match under control with a few knee drops, a headbutt and some haymakers to the jaw.

Madcap bangs Sikoa’s head against the announcers’ table yet Solo retaliates by sending Moss to the barricades.

Sikoa has Moss in a chokehold then he harshly whips Madcap into the turnbuckles with a thud that made me wince.

Madcap tosses Solo with a fallaway slam saying it’s pretty much over but Sami intervenes by pulling Sikoa out of harm’s way. Because of that, Moss literally chases after Sami, which distracts him from Solo’s Super Kick for the win.

The teams in the matchup are Hit Row, New Day, Butch and Ridge Holland from The Brawling Brutes as well as Ludwig Kaiser and Giovanni Vinci from Imperium.

This fight was hectic. Bodies everywhere. It was complete anarchy and I loved it! “Good luck to the official in this match,” said Michael Cole. A laugh.

Top Dolla has Ashante up in the air and throws him on everyone outside the ring.

Woods does deliver what appears to be a Bro Kick to Vinci in front of Sheamus. Ha! The audacity! Kofi Kingston joins Xavier with a jump of his own using Dolla as a literal human stepping stone.

Woods was on fire, taking out one athlete after another. First it was Vinci, followed by Ashante and Butch with a double DDT, before giving a Russian Leg Sweep to Giovanni.

Top Dolla amazed everyone by carrying three men on his back effortlessly and then slamming them.

Imperium assists each other to take down Kingston, yet what they didn’t see coming was Holland. He used their momentum so he could swoop in, eliminate Imperium before covering Kingston for the victory and winning an opportunity for his team to face the Undisputed twins, Jimmy and Jey Uso next week.