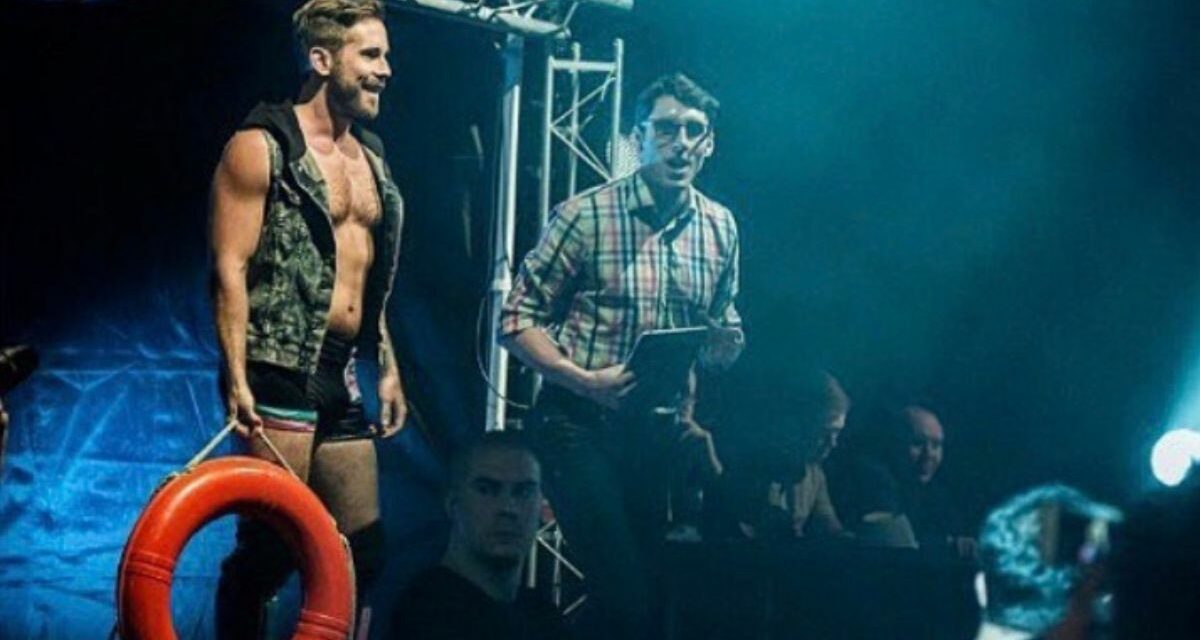 The handsomeness level is set to be off the charts at the debut show for Vancouver’s newest promotion – Boom Pro Wrestling.

For the first time in over six years, Brady Malibu – the man described as significantly more attractive than you – re-enters the squared circle.

Malibu became a permanent fixture on the British Columbia scene in late-2013 with Elite Canadian Championship Wrestling while at the same time chasing opportunities with WWE and in Japan. He quickly emerged as one of the top stars in the region, including competing at three of the promotion’s first five Ballroom Brawl super card shows, but by early-2016 he admitted he had become disillusioned with wrestling.

“I had done a whole bunch of WWE tryouts and toured with them a bunch of times,” Malibu told SlamWrestling.net. “I was getting good feedback from William Regal and Paul Heyman but never got a contract offer.” 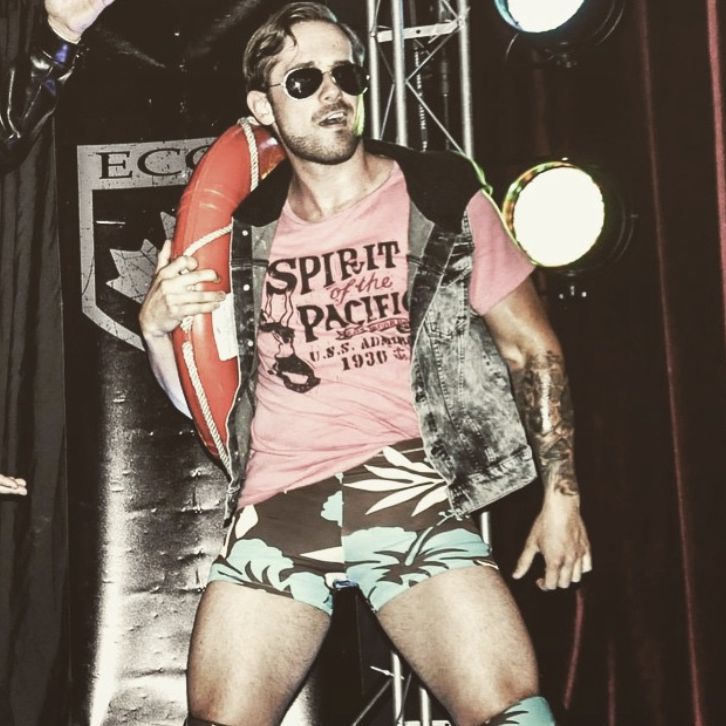 He explained he also fulfilled a lifelong dream by competing in Japan for Tajiri’s Smash Wrestling promotion, but shortly after he arrived that promotion shut down. The local scene and its hierarchy also was a source of dissatisfaction for Malibu.

“Just the junior high-like politics and the stuff that goes on behind the scenes I was just tired of,” he said. “There’s always just different cliques or factions in the locker room and I had just kind of had enough.”

He finished his ECCW run inside Vancouver’s historic Commodore Ballroom at Ballroom Brawl 5 with a loss to radio host Jeremy Baker in Malibu’s 15 Minutes of Fame Challenge and temporarily walked away from the ring.

It put a pause on a long career that started when he was at the tender age of 15. Malibu — real name Brady Roberts — first laced the boots in 2003 at Edmonton’s Monster Pro Wrestling and became a mainstay on the Alberta scene for over a decade. He went on to train at the esteemed Storm Wrestling Academy with Canadian legend Lance Storm and after sitting under his learning tree Malibu developed into a promising prospect before making the move to BC.

Malibu’s exit from wrestling was made possible through his other ventures and his skills in front of and behind the camera. He was a self-described ‘drama kid’ growing up in Alberta, as both of his parents were involved in theatre. 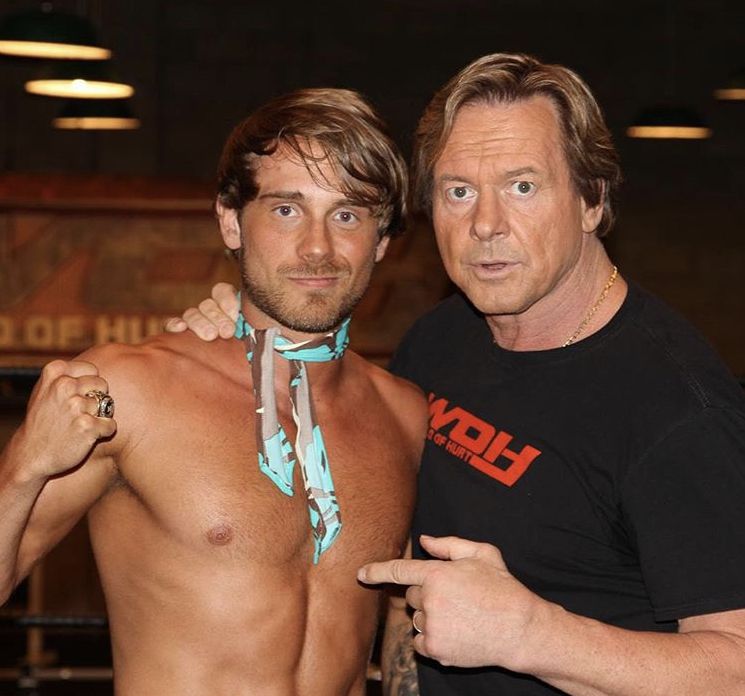 But it really wasn’t until the wrestling reality show World of Hurt that his eyes became more open to the possibilities. Season two of the show in 2012 was hosted by wrestling legend “Rowdy” Roddy Piper and it featured Piper offering advice to hopeful wrestlers – one of them was Malibu. He quickly developed into one of the stars of the season.

“That whole experience was one of the big turning points for me,” he said. “Both the director and Roddy said to me that I should get into film and TV. I had done some theatre but I was so focused on acting and when you’re a wrestler that’s all you think about.”

Malibu said Piper noted that WWE wouldn’t be thrilled with his smaller stature and questioned if Vince McMahon would understand his style of comedic character work.

He moved to Vancouver from Calgary after the show and dove into the film industry. He secured several roles in locally shot movies and TV series, but then really made an impact when he created a trailer starring as the DC character Nightwing. The short fan fiction video went viral and after its popularity he went on to shoot a four-episode series in 2014 and followed that up with a sequel in 2015. 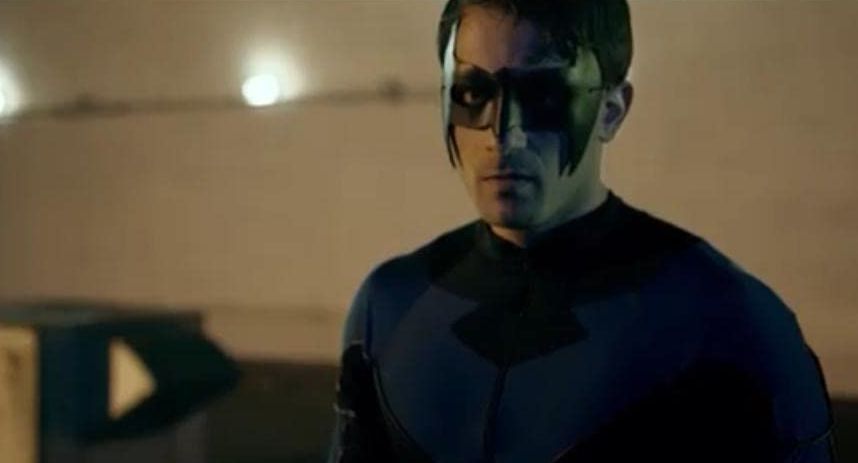 “I basically wanted a short film where I could showcase myself as an actor,” he said, of the original trailer. “I wanted to be in the lead role and a director friend of mine was also looking to bump up his demo reel. We had access to costume designers and had people from the Arrow and Flash stunt teams helping us out and it ended up getting millions of hits online and turned into something super cool. That project helped me get funding for other projects and it’s where I first worked with the two producing partners that I’m still with today.”

Malibu’s production company is known as Rogue Panda Pictures and he works with Mike Howorun and Matthew Hall – who both worked on that Nightwing short.

Another wrestling adjacent success for Malibu was the Paper Champions series. Malibu was one of the creators of the series, which was released in 2019 and appeared on Amazon Prime, Apple TV and other streaming platforms. It tells the story of a daughter who inherits her father’s struggling independent wrestling promotion after his death. Malibu starred as the promotion’s director Matteo Mason in the show, which was nominated for a 2020 Alberta Film and Television Awards in the Best Web Series category. 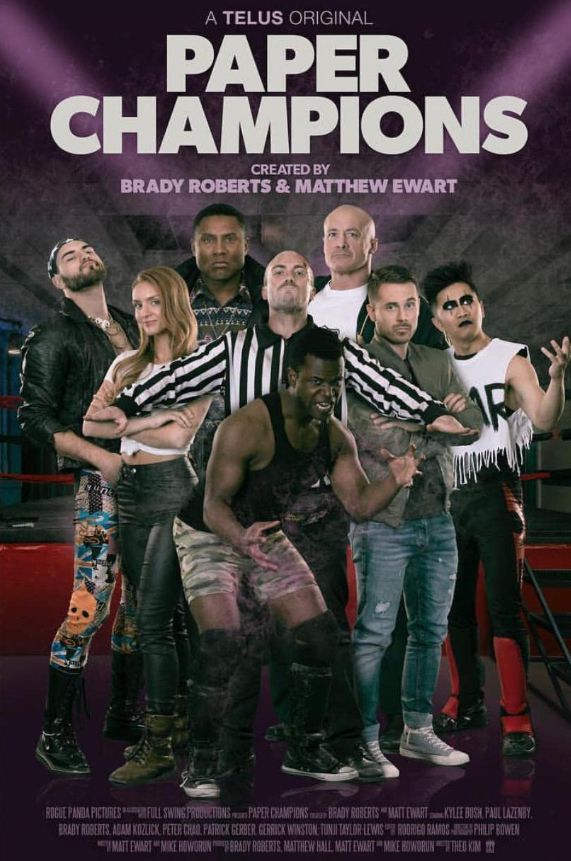 Malibu’s career on the screen continued to flourish with roles in TV shows such as Batwoman, Desturbia, Arrow and many others. But then the pandemic hit.

“We were right in the middle of pitching a bunch of stuff including things to Warner Brothers and after COVID they shut down all filming and weren’t taking any pitches,” he said.

“I had an idea for a film under the Denver Airport, kind of a thriller concept,” he said. “And I was listening to some scripted podcasts at the time and then worked on crafting the idea into an audio drama.” 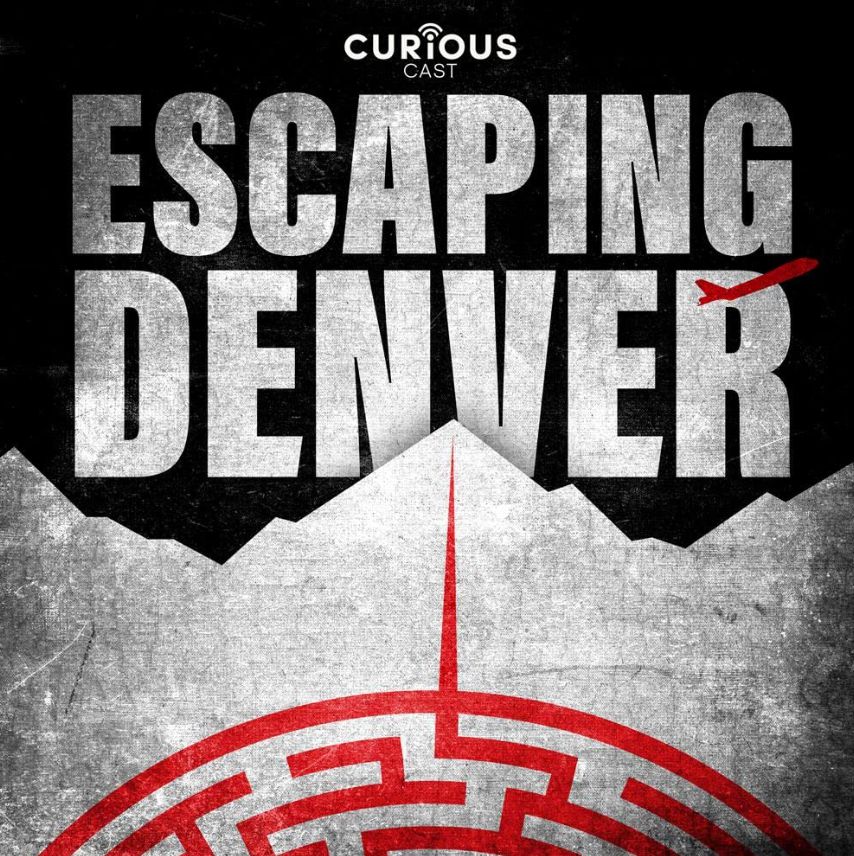 The concept was scooped up by Corus Entertainment and became Corus’ first-ever original fiction podcast. Malibu stars as one of the characters stuck in the airport and the show debuted in June 2021. It quickly became a massive success and has achieved over a million downloads. Season two is nearly complete and the podcast has been renewed for a third season. Malibu recently attended a fan convention in Denver and was a special guest there to talk about the show. He said it’s been rewarding to see people enjoying his creation.

“I was kind of surprised by the success of it because you just never know what will hit,” he said. “We’ve had meetings about turning it into a TV show and it’s really much more successful than I ever could have imagined.”

Malibu said despite all his wins in the acting and producing world, he feels like he has plenty of gas left in the tank for wrestling and feels re-energized after pausing for several years.

“Time was kind of healing the wounds of frustration and I felt my passion for wrestling re-igniting,” he said. “I also began to want to prove something to myself. Part of it is also wanting to go out on my own terms, I didn’t feel like I had a great end to my wrestling journey. I gave 15 years of my life to wrestling and sacrificed everything – I didn’t want to end on a bad note.” 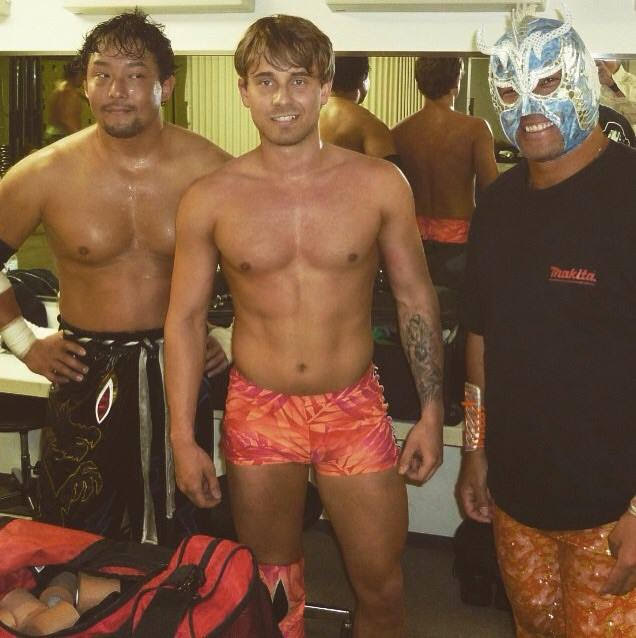 He said the Vancouver scene heating back up also led to his decision to return. Malibu said he was contacted by several local promotions to return but it didn’t feel right until he connected with longtime Vancouver comedy promoter Max Mitchell.

Mitchell, the principle owner and operator of Boom, said a video podcast that Malibu did with wrestler Ravenous Randy Myers called “Re-Booking the 90s” piqued his interest and made him realize Malibu and Myers would be great additions to his new promotion.

“I loved the podcast and felt like their approach to booking chimed with my vision of what Boom Pro Wrestling would eventually become,” Mitchell said. “It was character focused, story driven, lots of humor and constantly raising the stakes.”

Mitchell believes that Malibu will be an extremely important part of Boom.

“Malibu has the kind of in-ring experience that would make any wrestling fan excited,” he said. “Trained at the LA Dojo, wrestled at Korakuen Hall, etc.  But as a promoter, the thing that makes Malibu such an important part of the team, is his experiences outside of the ring. He’s an accomplished filmmaker and producer who understands how to tell a story and how to work an audience. On top of all that, he’s annoyingly handsome as well.” 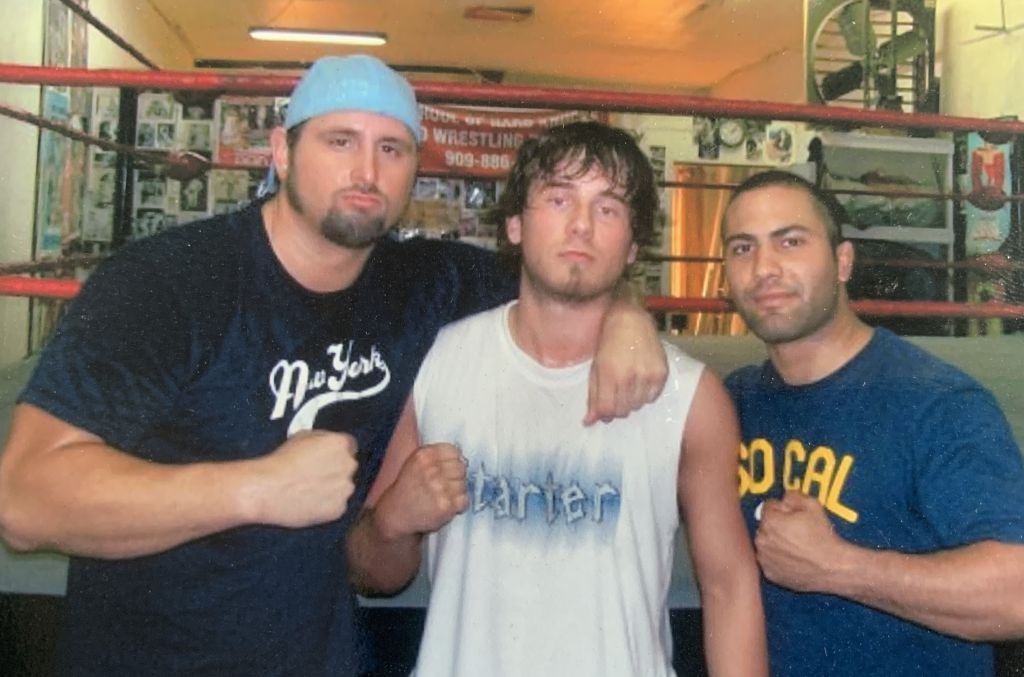 Malibu said he believes in Mitchell’s vision of pro wrestling.

“Combining great athletic wrestling with comedy – which is two things I really love,” Malibu said. “And doing some long-term storytelling. As a filmmaker myself I appreciate the attention to detail on that type of storytelling he wants to do.”

Malibu said he and the Boom team will have a unique format as each show is part of a first season, with twists and turns similar to a TV series. Events will be held monthly and the season finale is set to occur on June 25, 2023.

The current venue offers an intimate experience with only 175 tickets available per show. Malibu said they want to tell compelling stories and give each wrestler a unique journey.

“Max and everyone involved creatively sat down and we talked about each character individually and what their motivations are,” Malibu said. “Sometimes we spent hours mapping it out. Even some of the smaller characters will have a nice arc throughout the whole season.”

Malibu said they want to be different from what is already being offered in Vancouver and the surrounding areas. He also wants to attract new fans to wrestling.

“I think there are a lot of people coming to our show that aren’t necessarily wrestling fans,” he said. “There are a lot of people in the entertainment industry coming. We’re looking for more casual fans who want a fun night out. It’s going to be a bit of a variety/comedy show with fantastic wrestling and again we want to hook them with stories so that they want to come back and see what is going to happen next.”

Malibu has been entered into the four-man tournament for the Vancouver City Championship and opens against Shareef Morrow. The other side of the bracket features Randy Myers vs. Travis Williams. Other matches scheduled include: Tony Baroni vs. Elliot Tyler, Evan Rivers vs. Jacky Lee and a three-way bout featuring Nicole Matthews vs. Izzy McQueen vs. Cat Power.

Former American president Abraham Lincoln is also set to appear on the show to take on Parm Singh Mann. Lincoln was honored into the National Wrestling Hall of Fame in 1992 for his efforts and he sported an impressive win-loss wrestling record as a youth. He reportedly only lost one bout in 300 matches. It’s unclear when Lincoln last competed so he may have more than 150 years of ring rust to wear off.

For more on Boom, visit boomprowrestling.com.