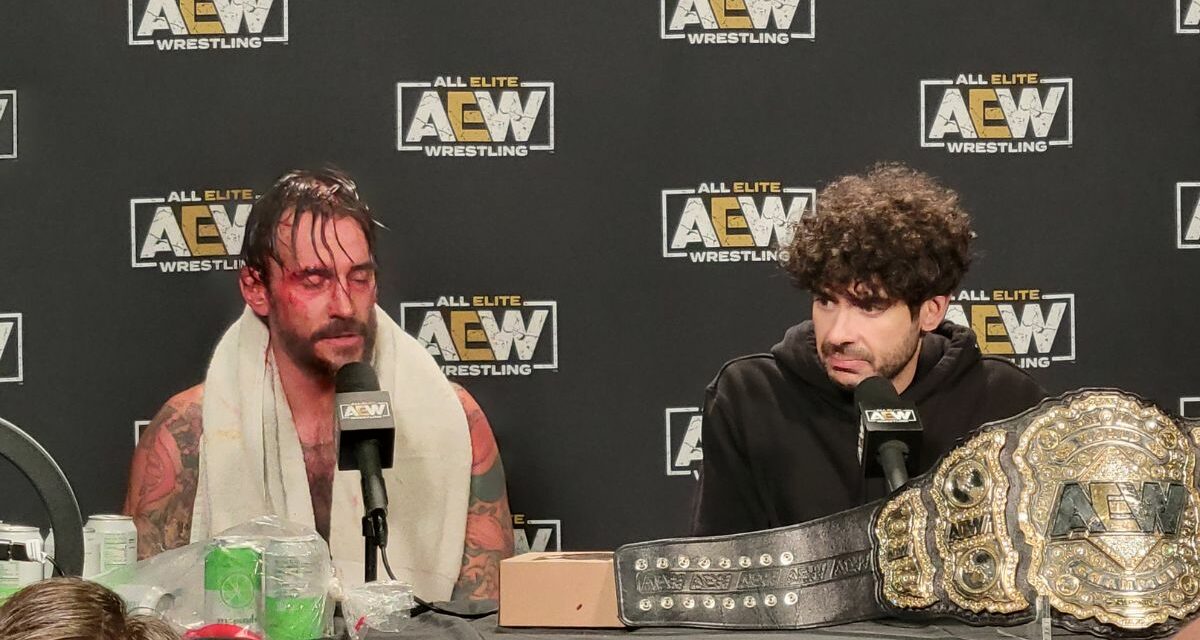 Despite having being crowned the new AEW World Heavyweight Champion at All Out, an annoyed and frankly pissed off CM Punk didn’t mince his words at a press conference afterwards.

Rumors have circulated that due to Punk’s falling out with Cabana (Scott Colton) years ago Cabana was reassigned to Ring of Honor instead of continuing as part of the Dark Order in AEW.

After Tony Khan denied that was the case at the press conference Punk himself finally broke his silence on the situation.

“I haven’t had anything to do with Scott Colton in almost a decade, probably haven’t wanted anything to do with him even longer than that. It’s f—–g unfortunate that I have to speak on this when I’m on my time and this is a f—–g business. I’m a grown ass adult man and if I decide not to be friends with somebody it is nobody else’s f—–g business. But, if I fall backwards my friends will catch me. Scott Colton, I felt never would have,” he began.

Punk then gave his side of the story that has been buzzing around for months.

“My problem was I wanted to bring a guy with me to the top that did not want to see me at the top. You can call it jealousy. You can call it envy. Whatever the f–k it is, my relationship with Scott Colton ended long before I paid all of his bills. I have every receipt. I have every invoice. I have every email. I have the email where he says and I quote…’I agree to go our separate ways. I will get my own lawyer and you do not have to pay any more.’ That’s an email that I have. The only reason the public did not see it is because when I finally had to counter-sue him through discovery we discovered he shared a bank account with his mother. That’s a fact,” said Punk.

Punk claims that when they subpoenaed Cabana’s mother, Cabana wanted to drop the case immediately.

“Now, it’s 2022. I haven’t been friends with this guy since at least 2014, late 2013 and the fact that I have to sit up here, because we have irresponsible people who call themselves EVPs yet they couldn’t f—–g manage a Target and they spread lies and b——t and put into the media that I got somebody fired when I have f–k all to do with him. I want nothing to do with him. I do not care where he works or where he doesn’t work, where he eats, where he sleeps. The fact that I have to get up here and do this in 2022 is f—–g embarrassing,” he continued.

“It’s his f—–g funeral. I don’t care. He shares a bank account with his mother that tells you all you need to know about what kind of character that is,” he said of Cabana.

Punk then criticized ‘Hangman’ Adam Page for his role in what happened. Hangman cut a personal promo on Punk on AEW television in August. Punk, then fired back.

“What did I ever do in this world to get to deserve an empty-headed, f—–g dumb f–k like ‘Hangman’ Adam Page to go out on national television and f—–g go into business for himself? For what? What did I ever do? I didn’t do a goddamn thing!” he said.

He would rip Page even more later on as Tony Khan sat beside him looking uncomfortable.

“We have a locker room full of pretty brilliant minds like Jerry Lynn, Dean Malenko and Mark Henry. Our locker room, for all the wisdom and brilliance it has, isn’t worth s–t when you have an empty-headed idiot who’s never done anything in the business do public interviews and say, ‘I don’t really take advice’. Who the f–k do you think you are? You know, that’s stupid. I’m on a team with Barry Bonds, Mark McGwire, Sammy Sosa and I don’t need to I don’t need to work on my swing? You say you are not going listen to these guys and you’re telling ME how to swing a baseball bat? Go f–k yourself! That’s how I feel about it. I dare you to f—–g say that to Terry Funk’s face. ‘I don’t need to listen to you, Mr. Funk. I know what I’m doing. F——g grow up!” he advised.

Punk then moved on to slam the AEW Executive Vice-Presidents which consist of Kenny Omega, Nick and Matt Jackson.

“There’s people who call themselves EVPs that should have f—–g known better. This s–t was none of their business. I understand sticking up for your f—–g friends. I f—–g get it. I stuck up for that guy (Colton) more than anybody. I paid his bills until I didn’t and it was my decision not to…When somebody (Page) who hasn’t done a damn thing in this business, jeopardizes the first million dollar house that this company has ever drawn off of my back and goes on national television and does that, it’s a disgrace to this industry. It’s a disgrace to this company. Now, we’re far beyond apologies. I gave him a f—–g chance. It did not get handled and you saw what I had to do, which is very regrettable, lowering myself to his f—–g level but that’s where we’re at right now,” he said apologizing to the press in attendance saying he was hurt, old, tired and he has to “work with children”.

Later in the press conference Punk reiterated his frustration with AEW management.

“I’ll tell you why I’m upset about it is because if you’re an EVP you don’t try to meddle with your top babyface and try to get your niche audience that’s on the internet to hate him for some made up b——t. It is stepping on your own dick while trying to make money, sell tickets and fill arenas. These stupid guys think they’re in Reseda,” he said.

Punk went on to rip into some of the younger AEW talent like MJF.

“I’m tired of wrestling these pricks. I’m tired of wrestling these kids that think they they know everything but I’m not the boss. I guess I’ll cross that bridge when I get to it. I think Max (Maxwell Jacob Friedman – MJF) is a supremely talented individual but this goes for him and anybody else in the locker room that doesn’t want to be here. The grass is not greener on the other side. The grass is greener where you water it and Max likes to you know, s–t where he eats instead of watering the grass,” he said.

Punk then commented on the backstage drama in AEW.

“It’s just so much drama and turmoil going on. I like to believe in the place I work. We do have a very, very strong roster. We have we have a lot of brilliant minds backstage so if young talents are willing to actually listen and receive advice and information, I honestly think the sky is the limit for AEW,” said a hopeful Punk.

TOP PHOTO: CM Punk and Tony Khan after AEW All Out. Photo by George Tahinos, https://georgetahinos.smugmug.com