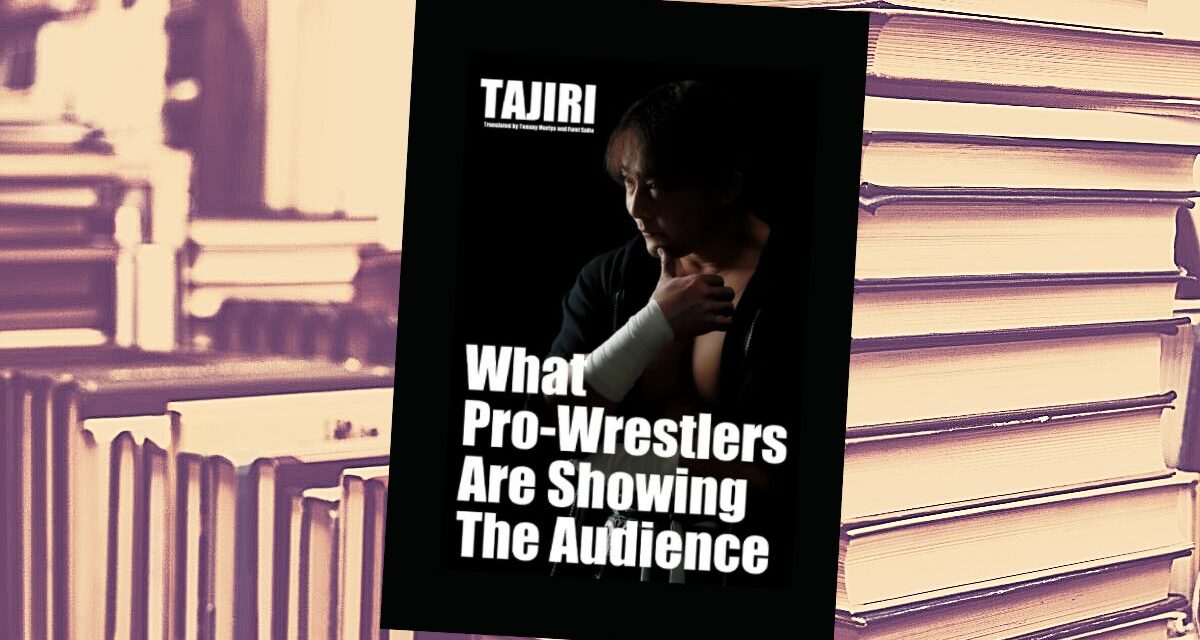 Few people have the ability to become pro wrestlers; fewer still can become successful in that strange business. And only a select handful can know the ins and outs of the industry so well that they can basically put together an almost pocket-sized guide on how to think like a wrestler. But that’s what Yoshihiro Tajiri did here.

Tajiri’s book flies in the face of almost every cliché, trope, and pre-conceived notion there is about pro wrestling in Japan, or puroresu/puro. In a country and culture that values conformity and not standing out, TAJIRI forges his own path, both as a wrestler and as an author. And his book What Pro-Wrestlers Are Showing The Audience provides excellent insight into the meaning behind the moves.

If anyone reading this is serious about wanting to not just become a wrestler but understand why things happen the way they do in wrestling, then Tajiri’s detailed book provides fantastic advice stemming from his own experiences as a wrestler that worked all over the world.

Tajiri begins this book with a single phrase that clearly make one think that Tajiri isn’t a Japanese wrestler but a wrestler that happens to be Japanese. Whereas most of puro is sports-centric and places action first and gimmicks/characters second, TAJIRI does the opposite. The very first line in his Preface is “Professional Wrestling is a Character Business.” And these words were told to him by Vince McMahon, who was/is the farthest things from a puro promoter. So right off the bat, the book stands out by not going down the same path as many other wrestlers’ books.

In fact, this book isn’t an autobiography, a collection of juicy secrets being brought to light for the first time, or even an ‘AHA, gotcha, wink-wink-nudge-nudge’ exposé on all the deepest secrets of wrestling to ruin its immersion.

Instead, this book is a guide. It’s a guide meant to help the reader understand the meaning behind not just wrestling as a business but also the meaning behind why wrestling matches are done the way they are. And although these arguments are, again, Tajiri’s own opinions, they come across as well-articulated and reasoned.

The book reads as both a career self-summary from Tajiri and the lessons he learned along the way. It covers his struggles in Mexico, his first run in WWE, his time as a promoter and creative influence, to his short-lived return to WWE and what he’s been up to most recently. And through all of those trials and tribulations, Tajiri offers some much-needed wisdom to aspiring wrestlers who only see one side of the business and not the other.

The first chapter highlights what Tajiri thinks are necessary basic requirements to be a wrestler. He explains how Japanese companies receive resumes from applicants in the same way as they’d do for a regular job application. And even though this is less than 20 pages into the book, Tajiri begins to make some interesting points. He argues that wrestlers should be able to do at least 1,000 squats to show they’re committed to training. He believes that wrestlers shouldn’t practice bumps because the body is consumable, and like any other professional athlete, doing repeating high-stress actions will wear the body down faster than not. He also think it wrong to admonish those that “play wrestler” because they’re showing they have the passion and the mindset to potentially become successful wrestlers (and it helps one improve their body balance and thus helps them grasp basic wrestling fundamentals).

At the same time, these early chapters serve as a warning or as a ‘gatekeeping’ mechanic for aspiring wrestlers. Tajiri isn’t shy about sharing how difficult his early wrestling years were. Since he debuted with a smaller promotion, he was making around $900 a month and had to commute for two hours by train per day between the dojo to train and his parents’ house to sleep. Those rookies that signed on with major promotions got the ‘benefit’ of living at the dojos; but that cloistered and structured life doesn’t always yield the best results, as the tragic case of Takeshi Miroshima reveals.

It’s in the third chapter that one of Tajiri’s biggest lessons is given: those pro-wrestling moves are tools of self-expression. Tajiri explains that just doing moves won’t have a lasting impression on the audience. Instead, a wrestler should do moves that fit their character and/or fit the story. Tajiri explains that since he traveled abroad to Mexico and the US with little grasp of local languages, he needed to express himself through actions and facial expressions. A close-fisted punch to an opponent’s nose would convey hatred. A tense technical exchange ending in a stalemate would show competitors are on a level playing field.

Showing fans something they haven’t seen before — in Tajiri’s case, his handspring back elbow —  conveys his potential. A chokeslam from Kane would convey power and destruction while a chokeslam from Greg ‘Hurricane’ Helms would be played for laughs. This is an important lesson that many wrestlers ought to focus on. It’s the philosophies of ‘less is more’ and ‘can I do this vs. should I so this?’ Tajiri emphasizes these last two points by focusing on psychology and logical actions. He defines it clearly and posits that “all things which make no sense must be eliminated.”

But this isn’t to say that there’s only one way of doing things. In fact, Tajiri provides an example of this that actually happened in WWE. The company’s top brass kept telling Tajiri and the other wrestlers that there was only one way of doing things and most people – including Tajiri, were afraid of speaking up. But someone did: Eddie Guerrero said out loud that he disagreed and that he’d do things his way. Not long afterwards, Eddie became WWE Champion. So again, Tajiri offers a vast wealth of knowledge and explains his position in a way that even someone without any wrestling knowledge can understand. But Tajiri knows how important it is to highlight how there will always be someone with a different viewpoint.

The best examples of this were Tajiri’s runs in various Japanese promotions. Even though he started his career in Japan, he didn’t spend much time there at first. It wasn’t until his WWE career ended that Tajiri found work in his home country. But Tajiri wanted to take the lessons he learned from Vince’s WWE and apply them in his next chapter. And to do that, he decided to work for HUSTLE in Japan. HUSTLE was a more WWE-style entertainment wrestling company, the polar opposite of sports-centric promotions like All Japan, New Japan, and NOAH. HUSTLE was more about characters and personalities, including non-wrestlers taking part in segments (not matches, but segments) in the ring. Naturally these ideas were controversial in Japan, but to Tajiri,  HUSTLE’s big gates and revenues were proof that his personal philosophy could lead to financial success.

Not content to leave it at that, Tajiri went even further in using wrestling as a creative outlet. In the book’s preface he compares wrestling more to films and manga than to sport. And in the sixth chapter, Tajiri goes full steam ahead with SMASH, his own creation that was more fantastical than quite possibly anything seen in the wrestling world before or since. With a small crew of wrestlers and a great TV and editing team, Tajiri created something unique: he created a fantasy world with ridiculous characters (including a literal “God of Scandinavia”) and had all of this other world’s biggest stories and confrontations concluded in the ring. He vowed to create “the one and only” of something, and for a long time, SMASH was successful. 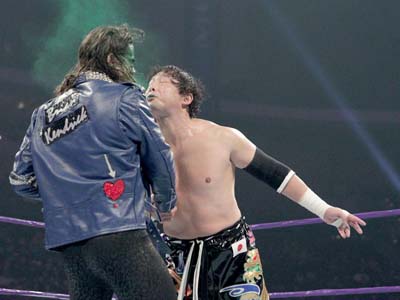 Tajiri blows mist into the face of The Brian Kendrick.

And one of his most successful ideas here was to send the fans home not happy, but bittersweet. If one’s goal is to tell an entire story in one show, then send them home happy. But if one wants to bring those same fans back, it’s better to give them something small, like a twist in the main story or the tease of the start of a new one, to hook them into coming back again. Because if it’s always going to be the same narrative of ‘the good guy wins in the end and all’s well that ends well’, then audiences won’t have any reason to pay to see the same thing twice. So not only does Tajiri explain his personal philosophy about wrestling, but he shows how he applied it and how he made money off of it.

Tajiri’s book makes for a truly fascinating read. Embedded between his various pearls of wisdom are some personal anecdotes and his own emotions about the highs and lows of being a wrestler. on one page you’ll be amazed at his explanation of something as critical as wrestling psychology, and on another you’ll empathize with him as he drowns his sorrows upon realizing that his body’s shutting down and one of his last big career dreams is taken away from him. It certainly paints the wrestling business in different colors and shades to show that for every success there are just as many failures.

As a final point, it’s recommended that one reads the book carefully and not just skim through it. Not just because his lessons are valuable and insightful, but also because the English translations are a bit off. Readers may find some phrases or tenses confusing, so it’s better to take time reading this book. But at least that way one will finish this book with a much better understanding of the science and meaning behind what’s taking place inside a wrestling ring.