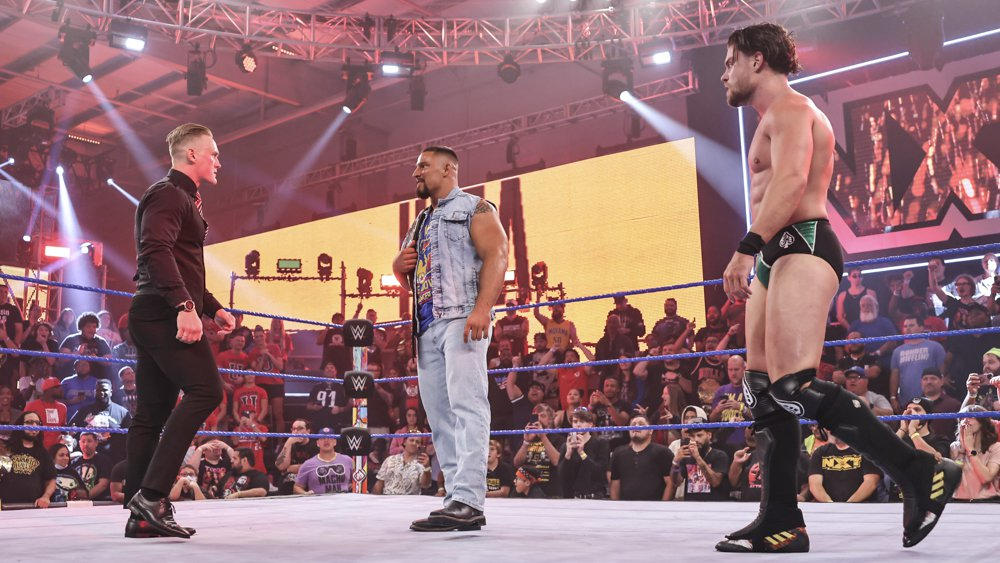 It’s good to see NXT returning to it’s roots; dropping the “2.0” and returning to the iconic black and gold. I haven’t watched much, if any of NXT since the rebrand last year, so I’m jumping in blind here. Solo Sikoa returned last week to capture the North American title. Let’s get to the action.

Earlier in the day, Carmelo Hayes and Solo Sikoa were called into a meeting with Shawn Michaels. Due to some the fact that Solo wasn’t even a candidate for the fans to vote on the match was not sanctioned. Michaels asked Solo to hand over the belt. He did and Shawn wished him the best. Hayes just assumed that he would get the title belt, but Shawn is going to make him face four other men in a ladder match at Halloween Havoc.

Obviously, Frazer has to win this match to keep the series alive. Frazer can’t capitalize after dropping kicking Axiom out of mid-air. The two trade enzuigiris. Axiom looks for the Golden Ration but runs right into a super kick. Frazer still can’t get the pin. Axiom catches Nathan in a sleeper and then tries to apply the Lebell lock. Frazer gets to the ropes to break the hold. Axiom stomps Frazer in the head. Nathan catches Axiom up top, hits a superplex and rolls through. He leaps back to the top and hits the Phoenix Splash. He covers and gets the pin to even the series at one.

Alba Fyre knows that Mandy Rose’s title reign has been historic, but she has seen fear in her eyes. Alba is going to take that title and burn the Mandy Rose empire to the ground.

Damon Kemp explains his feud with Diamond Mine. He will not fight the Creed Brothers two on one, though.

Ivy Nile is pretty upset that Damon Kemp took down Diamond Mine, but Tatum Paxley tells her that she needs to focus on this match.

Paxley and Dolan lock up. Tatum ducks a lariat and connects with a drop kick. Gigi hits a clothesline and then connect with a big shot under the jaw. Tatum makes the tag to Nile and Jacy Jayne tags in. Ivy with a suplex and cover; Gigi breaks up the pin. Jayne with a drop kick, but Nile catches Dolan with a forearm. Gigi and Jacy team up on Nile, connecting with a Cyclone Kick and lariat. Jayne covers to get the win.

Schism is in the ring. Jagger Reid gives a warning to those not walking along side them. Rip Fowler lets the one who join them that they have nothing to fear. Joe Gacy says enough time has been given to accept that change, but now we will see the world through there eye. He called out Cameron Grimes. Malik Blade and Edris Enofe charge the ring and clear out the Schism.

Blade and Enofe double team Fowler early, but can’t get the pin. Enofe sends Fowler and Reid to the floor. Blade flies over the top rope to take them out of the floor. Joe Gacy embrace his followers to give them some encouragement. Enofe with a knee to Fowler and Blade connects with a leap frog lariat. Fowler kicks out. Reid tags in and hits a destroyer on Blade off the back of Fowler. They hit Enofe with the Ticket to Mayhem and Reid covers to get the win.

The NXT crowd is split during this match. Choo with a running kick in the corner. Jade hits an elbow strike to the back of Choo’s head into the ropes. Cora locks in straight jacket choke. Wendy escapes with an arm drag and follows with a suplex Choo keeps ahold of Jade, hitting a German suplex. Jade knocks Wendy into the corner and hits a DDT. She covers Choo and gets the pin.

After the bell, Lash Legends kicks Choo in the face.

NXT Champion Bron Breakker weighs in on the number one contender match. He picks Tyler Bate to win.

Oro Mensah calls Grayson Waller one of the best, but he will qualify for the North American title match by beating him.

Carmelo Hayes calls himself the biggest superstar in NXT. He wants the everyone involved in the Solo Sikoa match last week fired. Andre Chase interrupts; Carmelo tries to shut him down. Chase powers through, calling this a teachable moment. Chase sends Carmelo from the ring. We have ourselves a match.

Chase takes Trick over with an arm drag. He runs into a drop kick. Hayward tags in to double team Hayes. Bodhi shoulder tackles Williams. Chase tags in. He stomps away at Trick. Hayward picks up Williams in a torture rack, but Carmelo is able to reach him for a tag. Carmelo takes Bodhi down and connects with a kick. Williams misses a flying shoulder tackle and tags in Chase. He slams Williams to the mat and goes up top. Williams dodges him coming off the ropes and and hits him with a pop up uppercut. Hayes tags in, but Chase is able to roll him up and steal a pin.

Security has to break up a brawl in a make shift bar between the Gallus boys and Brooks Jensen and  Josh Briggs.

Sagna kicks Wagner off the apron to the floor. He runs Wagner over. Stone tries to get involved, which allows Wagner to get the upper hand. Wagner gets Sanga up on his shoulders and drops him with a Death Valley TKO. He covers to get the win.

Wes Lee has been medically cleared to wrestle and he wants to qualify for the North American title match.

Channing Lorenzo thinks Wes Lee is dumb for not taking an automatic qualifier into the NA title match. Next week he will have to face the Don of NXT.

Cameron Grimes vows to chop down the Schism tree.

Waller opens with a punch. He pulls Mensah down to the mat by the hair. Oro weathers the early attacks and starts to fight back. Mensah beats Waller into the corner. Grayson counters with a belly to back suplex. He knees Oro in the back. Waller blocks a sunset flip and beats on Mensah. Wallers repeatedly elbows Oro in the head, looking for a knockout. Mensah fights back with forearms strikes and connects with a kicks. Waller wants the slingshot cutter, but is stopped dead in his track by Apollo Crews. Mensah hits a spinning heel kick in the ring and covers to get the pin.

The Creed Brothers decide that Brutus will take on Damon Kemp and Julius wants him to end Kemp’s career.

Bron Breakker heads to ringside to watch the number one contenders match.

Sol Ruca is leaving the beach and hitting the ring.

McDonagh takes Bate to the mat. The two trade holds and circle each other, with neither gaining an upper hand. Bate hits a cross body. HE connects with a flying elbow and takes JD for a spin. The two trade near falls. Bate bridges out of a pin. The two hit each other with clothesline and both men are down.

After a commercial break, McDonagh kicks away at Bate. Tyler blocks a suplex and whips JD out of the ring. Bate with a dive over the ropes, knocking McDonagh into the announce table. JD smashes Tyler into the desk, trying to send Bron a message.

Back in the ring, Bate hits a suplex and lands a standing shooting star press. Bate catches McDonagh and takes him for a big airplane spin. It’s still not enough to get the pin though. JD is whipped to the apron and low bridges a charging Bate. JD with a moonsault and then hits a 450 splash in the ring. McDonagh follows up with a brain buster. The two trade punches in the middle of the ring. JD blocks the Tyler Driver 97. McDonagh catches Bate with a Spanish Fly. Bate answers with a straight punch and pulls himself up to the top turnbuckle. McDonagh meets him there. Bate looks for the Tyler Driver 97. JD puts a stop to that with a head butt. McDonagh hits the Spanish Fly from the top turnbuckle. He covers Bate and gets the three count.

NXT is better since I last watched it, but that’s not saying much. That being said, do yourself a favor and watch the Main Event between Tyler Bate and JD McDonagh.