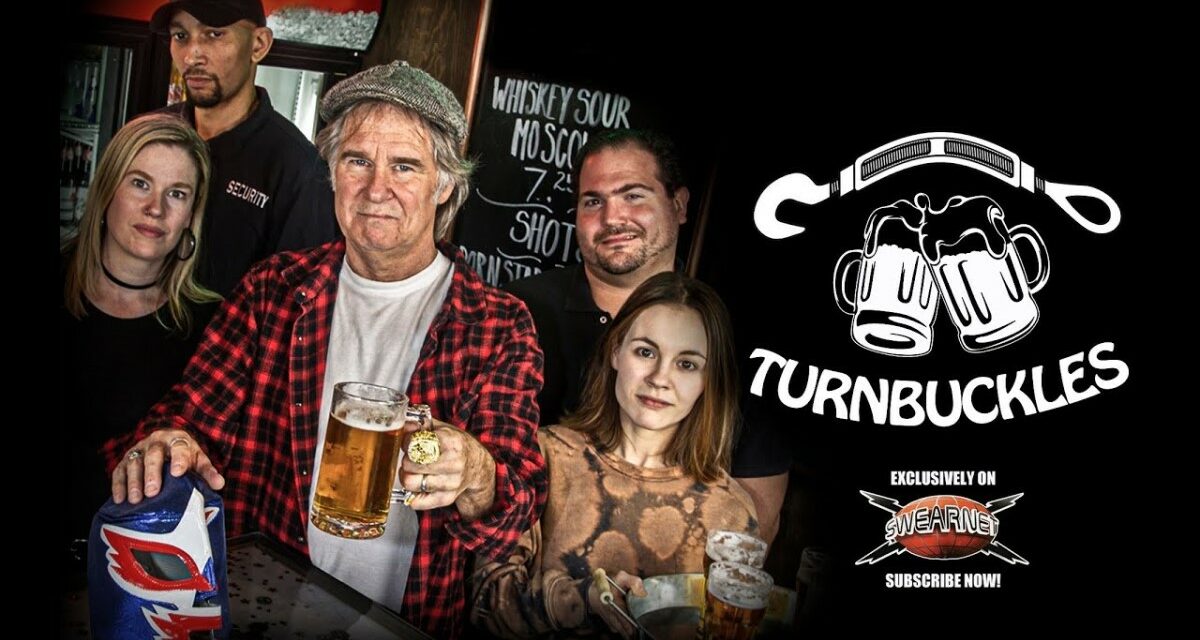 With plenty of wrestling-based content on TV and online these days, there’s a new production from Eastern Canada throwing its hat into the ring. Turnbuckles, produced for Swearnet.com, the streaming service most famous for hosting The Trailer Park Boys, is available as of this week through the purchase of a site membership. On the day of its release, SlamWrestling.net spoke with some of the cast and crew to discuss the breakneck production schedule, why pro wrestling provides an easy framework through which to tell a story, and what they hope people will enjoy most about Turnbuckles.

The film follows long-retired pro wrestler “Jumping” Jack Lund, played by Kevin Jollimore, who is trying to keep his bar business running amidst poor customer turnout, threats from financial partners he was forced to do business with, and constant fights between patrons that have the police close to shutting him down.

Things turn around for the better when Lund decides to lean into the fights and turn them into a spectacle, setting up a wrestling ring in the middle of the bar and offering people a chance to settle their grievances for show.

Available for the interview were Dave Boyce, Dave Mullins, André Myette, and Jollimore.

Boyce, who wore many hats on the production but is credited as story editor (and also plays a bit part in the film), begins by putting the pieces together of how Turnbuckles came to be, starting with his connection to the film’s co-director Dave Mullins. “You guys did a show couple years ago called Real Wrestling, and I was brought in for that,” Boyce recalls.

Real Wrestling could be viewed as a precursor to Turnbuckles, as it presented a wrestling tournament held over 10 episodes, but with a focus on the characters and interactions that make pro wrestling a unique form of entertainment. Boyce served as host for that series, bringing with him his own history from the world of Maritime wrestling (he’s also busily promoting a show in Springhill, NS, on August 20th, featuring some of the same wrestlers that appear in Turnbuckles).

Mullins picks up the story from there. “It originally started as what would have been a live show,” he explains. “But because of COVID, it very quickly turned from a live show into a scripted show. The producer Jason Mosher approached Dave Boyce, myself and (writer) Tieren Hawkins about doing something scripted, which we jumped on immediately. We wrote it in a week and a half, in a week we shot it, a week of editing and bam.”

While this hectic production schedule is evident in an unpolished feel to the production, Mullins recognizes what he as a co-director could control and what was out of his hands, and credits the talent of the cast and crew coming from diverse theatrical backgrounds to create something he’s very proud of. “Whenever I see something that I’ve made, I can’t help but think of how I might have done something differently,” Mullins admits. “We shot this thing in a week. I know what I had to work with, other than the amazing talent of (the cast and crew). But this is the only thing that I’ve ever watched of my own multiple times and still enjoy it more each time I watch it.”

With wrestling running deep through the production team comprised of both wrestlers and fans, it may seem obvious that they would choose to set this story in the world of pro wrestling for a sense of familiarity. More than that, however, they express why they think wrestling is a uniquely effective setting for all sorts of storytelling.

“Some people might know Fight Club or something like that, or some people might have a little bit of boxing in their background, but I think the majority of people at some point in their life have watched pro wrestling,” Boyce suggests. “I know in the Maritimes whenever you mention wrestling, people always say, ‘Oh, I used to go to Grand Prix Wrestling with my dad’, and everyone has that connection with pro wrestling at some point.”

As if to immediately back up what Boyce suggests, Jollimore details his own connection to wrestling from growing up in Nova Scotia. “I grew up with Grand Prix Wrestling and all the great names from that era,” he says. “I loved (announcer) Clary Fleming and that crazy gang. My father hated wrestling and he did not want us to have it on television, so I naturally rebelled against that and loved it.”

Mullins suggests that there’s even more to it when marrying wrestling and film or TV, and how the sport itself plays perfectly into theatrical story structure. “First and foremost wrestling is story,” he explains. “They’re not just coming out and doing these fantastic moves, it’s the stories that keeps people coming back. You can watch MMA or boxing and it’s two people you may have never heard of before having one fight that has no story.”

Adding to this is André Myette, Nova Scotian wrestler/actor who plays an imposing brute in Turnbuckles (with a pretty good Irish brogue). “I want to jump in and say there’s a level of sensationalism with wrestling that other sports have copied,” he points out. “If you watch MMA now, they’ll get the music when they come out, they all have flashy gear that matches whatever their gimmick is; all that stuff was taken from wrestling. There’s a theatrical level of wrestling that is integrated very well into a television show because there’s a built-in level of spectacle to begin with.”

Jollimore chimes in again to conclude that “the redemption of wrestling over a lot of other sports is, sooner or later, the good guy does win.”

With this shared vision of what film, television, theatre, and wrestling all share in terms of the core nature of storytelling, there was still the matter of the two fields coming together with wrestlers acting, and actors wrestling. “It was really cool to see the two worlds work together on this project,” Mullins offers. “The wrestlers aren’t normally working on a TV film, and actors don’t work with wrestlers on a normal day.” 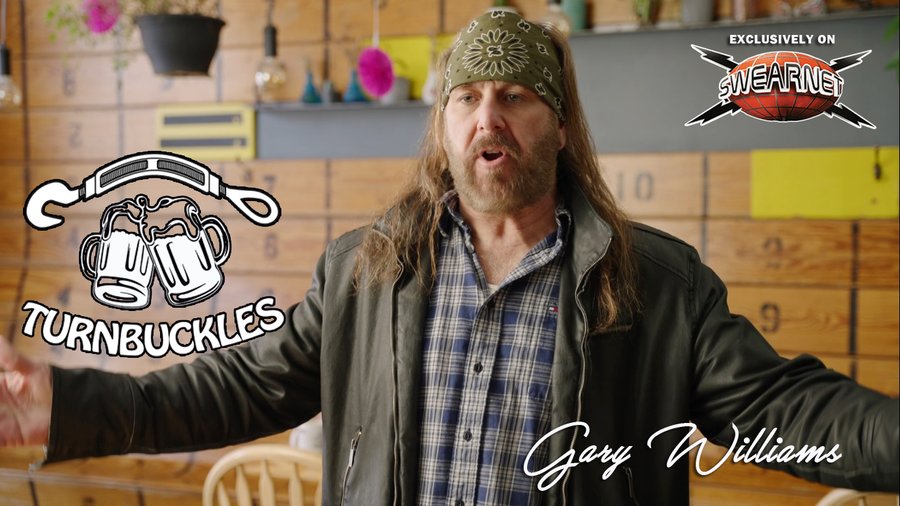 “At the end of the day, we’re all entertainers,” Jollimore adds. “We all know there’s an audience there to be entertained. Put your best foot forward, let them see you, let them hear you — all these things are rules that I know from the world of theatre and television. There’s technique in wrestling, there’s technique in acting, but the bottom line is: entertain.”

That being said, Jollimore readily admits that there was a rush to performing within the squared circle. “I used to box, so I’ve been in a ring before, but the power of that stage was just coursing through my veins,” he enthuses. “When I was talking to the people and shaking the ropes and saying ‘Shut the f— up’, what a power trip! I got so high just doing that and winding these people up that I wound myself up. It was such an awesome feeling.”

Myette jumps in to highlight some of the differences between performing in the ring and acting for the camera. “There’s a level of improvisation that comes with wrestling,” he explains. “You don’t know what the crowd is going to be like, and you can have some fun and change the structure even mid-match. With TV or film, you’re not getting an immediate reaction from the audience. It was interesting to have that as a part of (Turnbuckles), with the audience cheering along.”

Mullins agrees and points out that the live crowd in place for the wrestling scenes in the film brought an unexpected energy to the filming process. “For all intents and purposes, these were real wrestling matches,” he says. “You can tell these people were genuinely excited. The yelling and the screaming, cheers and the claps, that was legitimate.”

“They were so loud,” adds Boyce. “We actually had to make hand gestures for action and cut because they couldn’t hear Dave [Mullins].”

With all of this enthusiasm and love for entertainment, the cast and crew ultimately have a simple hope for the film: that’s for people to enjoy what they’ve created, and for those that put it together to get their due.

Check out Swearnet for their subscription plans to watch Turnbuckles anytime, and stay tuned to SlamWrestling.net for a review of the film.