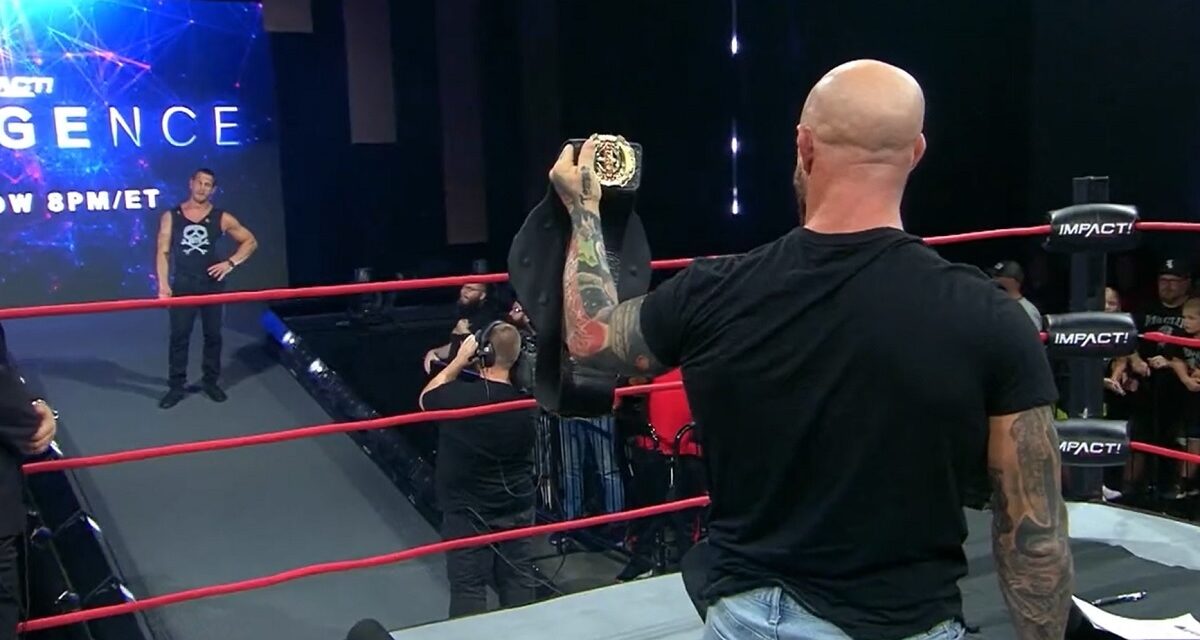 Having never been given an opportunity at the Impact World Championship before now, one might expect Alex Shelley has some doubts as to his chances to win the big one tomorrow night at Emergence. But on Thursday night’s episode of Impact, he certainly wasn’t lacking confidence. And he made that perfectly clear to champion Josh Alexander during their contract signing for the match, telling Josh to expect to leave the show without the title.

This one was a continuation of the series of matches over the past few weeks between the Bullet Club and Honor No More. They will compete tomorrow at Emergence and if the Bullet Club win, Honor No More has to disband. Both factions were banned from ringside for this one.

After some fun back-and-forth action early on, which saw both men go for quick pinfalls, things slowed down when he yanked Anderson’s leg over the rope and then hit a chop block on the weakened leg. King worked over the leg and would go back at it any time Anderson tried to mount a comeback. After a nice Exploder Suplex, King locked on a leg submission, but Anderson got to the rope to break it up. King went for the Royal Flush, but Anderson reversed it and hit the Stun Gun for the pin. The finish was confusing, as it wasn’t visibly obvious who was on the wrong side of the move, so the only way anyone could tell was when Anderson sprang up and pinned King. Even the commentary team said they weren’t aware of what had happened in the moment.

After the match, Kenny sneak-attacked Anderson and hit him in the bad knee with a chair. He set up to Pillmanize Anderson’s knee, but Heath ran in from behind and hit King with the Wake Up Call.

This was a decent match, but the crowd was dead, and that’s likely because neither one of these guys has a lick of personality. The muffed ending didn’t help matters.

A video package aired for Alex Shelley, who gets his first ever Impact World Championship shot on Saturday.

This is a preview of the match these teams will have tomorrow at Emergence. KUSHIDA out-speeded Deaner and had the early advantage. Doering blocked KUSHIDA from chasing Deaner on the floor, and Sabin confronted Doering. But the distraction allowed Deaner to waffle KUSHIDA from behind and take over. He worked over KUSHIDA for a while, getting some near-falls, but KUSHIDA had no quit. KUSHIDA grabbed Deaner’s arm and went for a submission. Doering tried to get involved, but Sabin took him out with a Flying Somersault Dive off the apron. KUSHIDA then hit Deaner with a Northern Lights Suplex to get the win.

This was another good match, but again the crowd didn’t seem to be feeling it much –  though they did get loud when KUSHIDA got the win. Not sure having the babyface win so cleanly makes sense if they are doing the tag team match tomorrow – unless they lose again and they further the storyline of the tension between Deaner, Doering and their Violent By Design leader Eric Young.

The Flashback Moment of the Week came from Genesis 2009 where Alex Shelley beat Chris Sabin for the X-Division Championship. Man, I miss Mike Tenay and Don West on commentary.

In the back, Bhupinder Gujjar shamed Digital Media Champion Brian Myers into giving him a title shot at Emergence.

In a stairwell, Eric Young voiced his disappointment in Deaner and Doering for losing their match and not eliminating the sickness. Young said that he would have to take matters into his own hands at Emergence when VBD takes on Sabin and Emergence. He said the world belongs to him.

Nieves made the mistake of slapping Kelly at the top of the match, and she paid for it. Kelly blasted her with vicious strikes and a Corner Dropkick before locking on the Killer Klutch, forcing Nieves to tap out.

This was a good debut for Kelly, and the presentation they gave her entrance and post-match exit helped portray her as a real badass.

A video recap aired showing the build-up to Honor No More vs. Bullet Club at Emergence. After that, they cut to Honor No More in the back. Eddie was hyping the group up for tomorrow’s match, saying they will finally get their respect from Impact. Eddie lauded Kenny King for leaving Anderson limping after the match earlier tonight.

They started off with some technical wrestling, jockeying for position, with Yim getting the upper hand, and making Rayne flop around the ring pathetically. But Rayne used her smarts and after a chase, she ended up smashing Yim’s face against the ring post, allowing her to take control.

Mia tried to fight back, but Rayne avoided a Missile Dropkick and went back to punishing Yim. Rayne went to finish Yim with a Hurancarana off the top, but Yim caught her and dropped her with a big Powerbomb. Yim then hit a few big kicks and a Cannonball in the corner before going for a pin that Rayne broke up by grabbing the rope. Yim then hit a Pele Kick and Eat Defeat to get the pin.

This was good and the crowd really got into it, especially with some of the 2-counts near the end of the match. This would seemingly be Rayne’s last match with the company as she’s now taken an office and wrestling position with All Elite Wrestling. The commentators ran down her various championships and accolades during the match, presumably as a sign of respect for what she’s done in the company. They didn’t mention her stint as a commentator, which is probably for the best.

In their dressing room, Chelsea Green and Deonna Purrazzo were talking about the plans for Deonna’s bachelorette party, which Green is organizing. They said they would have a second party when they beat Rosemary and Taya Valkyrie for the Knockouts Tag Team Championship tomorrow.

Backstage, Jordynne Grace and Mia Yim had a conversation that started off civil, but got increasingly less so as it went on. After some tense words, Yim walked away from Grace. Grace defends the Knockouts Champion against Yim tomorrow night.

The commentators noted that the winner of this match will go on to defend the title against Jack Evans tomorrow night.

They started off with a handshake, and then had a series stalemate sequences that looked gymnastically fantastic.

What a match ALREADY!

The stalemate ended when Rocky ducked a kick on the floor and Bailey ended up kicking the ring post. Rocky then went on the attack, working over Bailey with big strikes and power moves, until Bailey fired back with a series of big kicks. Bailey got caught with a kick to the face in a failed Handspring attempt, and then Rocky took over, nearly getting the win after a Springboard DDT. They exchanged more big moves, and both men were knocked down after simultaneous moves, as the show headed to commercial.

Back from the break, and the two were still going at it tooth and nail – well, mainly feet and legs – with the occasional Flying Dive and Springboard Moonsault thrown in for good measure.

Bailey hit a Double Knee Shooting Star and a Boot to the Head, but Rocky kicked out. They exchanged a number of finisher attempts as the pace quickened, but neither man would stay down for three. Finally, Bailey was able to dodge a Forever Clothesline and hit a Spinning Liu Kang Kick, which knocked Romero down and in position for the Ultimo Weapon, which kept him down for good.

After the match, Rocky raised Bailey’s arm in victory as a sign of respect.

This one felt a bit too indyriffic at times, but the last few minutes were really good. Bailey and Evans should be a fun one tomorrow, a throwback to the original X-Division days.

Contract signing for the World Championship match at Emergence

Impact Executive Vice-President Scott D’Amore was in the ring. He said that of all the roles he’s had in his career, the one he’s liked best was “Coach.” And two of the people he’s coached are the current Impact World Champion Josh Alexander and his challenger tomorrow night, Alex Shelley. He introduced both of them and they made their entrances to the ring. D’Amore called this a dream match scenario and invited both of them to sign the contract and make it official.

Josh took the mic first and told Shelley that he was on the card at the first wrestling show Josh ever attended. And the very next day, Alexander started wrestling school. He put Shelley over and said it would be an honour to not only get into the ring with Shelley for their first singles match against each other, but to beat him.

Shelley then took the mic and he backhandedly complimented Josh. But then asked if Josh wasn’t anything more than an Alex Shelley wanna-be.

Josh said that he was more of a Chris Sabin guy because unlike Shelley, Sabin has actually won a World Championship. Josh then questioned Shelley whether he had the heart and the guts to actually be the World Champion. He said that Shelley at his best had never won the world title, so he wants Shelley to be better than his best during their match.

Shelley said that he doesn’t think that Alexander knows what it means to truly be the champion. He ran down all of Josh’s injuries and said the physical toll Alexander has taken so far won’t be his downfall in their match. Rather, it will be Alexander’s mental game. Because he will be facing his hero in Shelley, and he isn’t going to able to overcome his hero worship. And Alex will only be facing an Alex Shelley mark. Shelley said that he would be taking Josh’s title, but would leave him a consolation prize: an autograph, in the form of the signed contract. Shelley left the ring and confidently walked up the ramp and to the back.

Will @fakekinkade leave @IMPACTWRESTLING World Champion at #EMERGENCE or will @Walking_Weapon prevail!?

This was really well-done. On paper, the in-ring action promised by this match makes it a show-stealer. But adding in the personal backstory really upped the ante in terms of making this feel must-see. Josh is always dependable on the mic, but Shelley was particularly good here. Very strong ending to a strong go-home show.

The measure of a successful  “go-home” show is that it made you more interested in watching the event that it’s promoting than you were going in. By that measure, this episode was strong, as the closing segment made tomorrow night’s main event even more compelling than it was on paper.

That said, the dead crowd for the first couple of matches made the first hour feel like a bit of a slog. The show definitely rebounded with a strong second hour, but it took a while to get there.