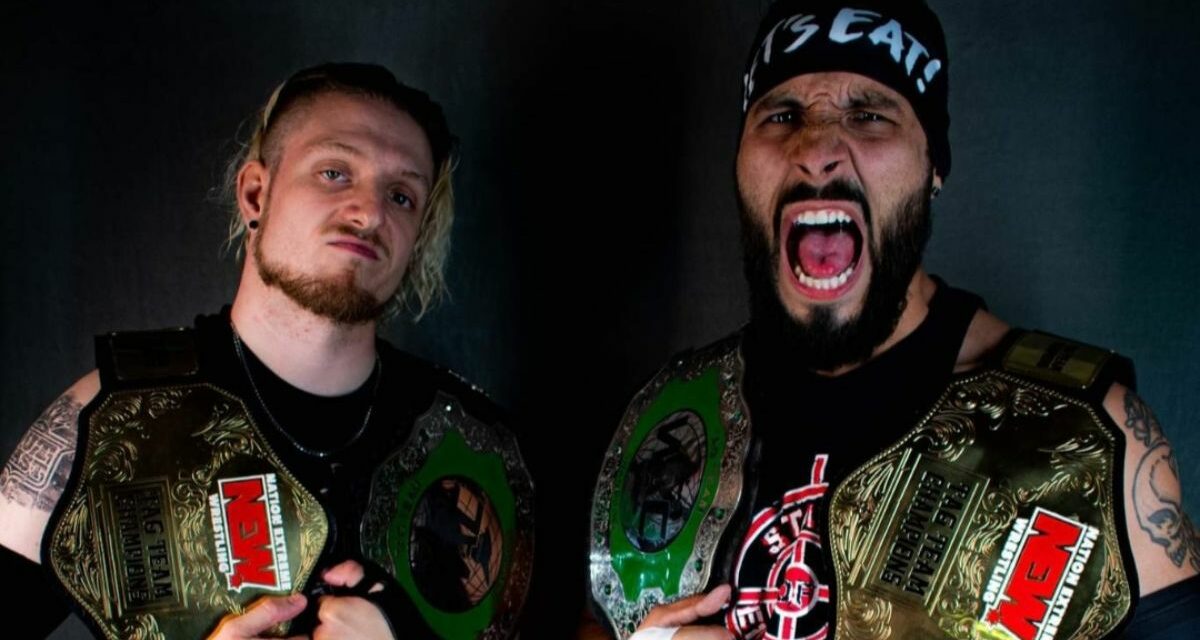 It’s a triple-shot that no tag team in the Pacific Northwest has ever taken on and may never again:

It’s the biggest weekend ever for the PNW’s fastest rising tag team – State of Emergency – consisting of powerhouse Sebastian Wolfe and the high-flying Miles Deville.
The pair captured the NEW tag titles on April 7 and added to their trophy case by winning the Everett, Wash.-based Without A Cause tag team titles on June 18.

The pressure is on for Wolfe and Deville, as Friday and Saturday they step into the ring with former WWE stars the Bollywood Boyz. It’s also the duo’s first-ever appearance at DEFY’s Washington Hall – a building that has seen the likes of Jon Moxley, Eddie Kingston, Darby Allin, Shane Strickland and many more pack the building.

But if you ask State of Emergency, pressure is what they’ve been waiting for – through local companies falling and rising, a global pandemic and hundreds of hours of training – weekends like the one upcoming are worth it all.

The roots of State of Emergency (SOE) were nurtured and grown in the Pacific Northwest (PNW) under what is now known as the Lions Gate Dojo.

Training under established stars such as Artemis Spencer, Nicole Matthews, Billy Suede and Tony Baroni, Wolfe and Deville began making appearances separately in promotions across British Columbia in 2018 and 2019.

According to cagematch.net, the very first heartbeats of SOE occurred at the Abbotsford Agrifair on August 3, 2019. Wolfe and Deville teamed and lost to the duo of Bruiser Joe and Matt Bronson.

After each moving on and working with a variety of different partners, the SOE recognized by PNW fans began making appearances in promotions like Kelowna’s Big West Wrestling and WAC.

Deville said he realized early that SOE worked because they both bring something unique to the table.

“When I was a fan growing up I always loved the teams that had that dynamic where they were different,” he said, citing the team of Rey Mysterio and Batista as an example. “You have the big base and then you have the high flyer. I’ve always liked that difference and you can lean into both of those things. And for us we can kind of switch it up at times and dip into each other’s lanes.”

Wolfe said he does like the way SOE can highlight their skills, but noted he and Deville are versatile. State Of Emergency double team an opponent. Photo by Fubarfoto

“What’s cool about us is that we have the power and speed but we’re also able to switch it up,” he said, noting he’s influenced today by FTR and by classic teams like the British Bulldogs and Hart Foundation. “As much as Miles can fly, he’s not a really small guy. We’re just different and work well together.”

That chemistry is displayed by the team’s devastating Emergency Exit finisher. They put a spin on the power and aerial dynamic, with Deville propping an opponent on his shoulders and Wolfe coming off the top rope with a spear.

Vancouver fans saw Deville and Wolfe pay their dues for years in Elite Canadian Championship Wrestling and they stated they were due for an opportunity to be featured as a team, but then the pandemic and other issues ground that promotion to a halt.

Rumblings of a new promotion started in 2021, but Wolfe and Deville admitted they were a little hesitant to believe all the early chatter.

“I remember the Lions Gate coaches just told us all not to get our hopes up because they’ve seen this kind of thing many times over the years,” Wolfe said. “So, they were skeptical, which made us skeptical and it was a little hard to believe.”

But the promises were fulfilled. NEW ran its first show in September 2021 and have quickly become the premier promotion in the Vancouver area. It recently signed a deal to make the Commodore Ballroom the promotion’s new home and ticket sales have been strong.

SOE have emerged as one of the biggest stories during NEW’s run, but Deville wasn’t even in the country when the promotion made its debut – he was in Mexico.
Deville was one of several local wrestlers who took advantage of a unique training opportunity to learn and train with some of the best minds in lucha libre. Deville trained with names such as Bandido, Ricky Marvin, Negro Navarro, Flamita and others.

Deville said his two-month stint in Mexico helped him tremendously.

“I really think I leveled up after I came back from there,” he said. “There are so many different styles down there, when most people think of lucha libre they think fast-paced and high-flying, but there is a lot of technical wrestling and submission ground-based stuff I learned. I just think it finely tuned a lot of my skills.”

As Deville was in Mexico, Wolfe’s debut in NEW turned into a viral smash success.

He took on Evan Rivers at the first show in Richmond on September 11 and the hard-hitting street fight turned heads of fans and passing drivers when the fight went outside and onto the lawn right across from the busy No. 3 Road in Richmond. At one-point Wolfe smashed Rivers’ face into the outside windows of the venue and he eventually scored the win.

“It was the first show and I just remember Chris [Parry, co-promoter] and Rob [Fai, co-promoter] telling us to do whatever we wanted and to try and make a moment,” Wolfe said. “I remember us looking around the venue before and the ideas started snowballing. Just the visual of the brawl on the grass and all the cars driving by and people thinking what the hell is going on? I think everyone was pretty happy with how it turned out.”

When Deville returned, the SOE was in full effect and the pair picked up a win over Re:Loaded at NEW 5 in Vancouver on February 25.

“That was to this day one of my favorite matches I’ve ever had,” Deville said.

That win led them to earning a title shot against The Wisemen at NEW 6 on April 7. It created an interesting dynamic because both teams are not exactly fan favorites.

“Going into it you didn’t know who the crowd was going to be behind,” Deville said. “And it switched back and forth throughout the match, but I think towards the end they kind of leaned towards us. It was interesting.” 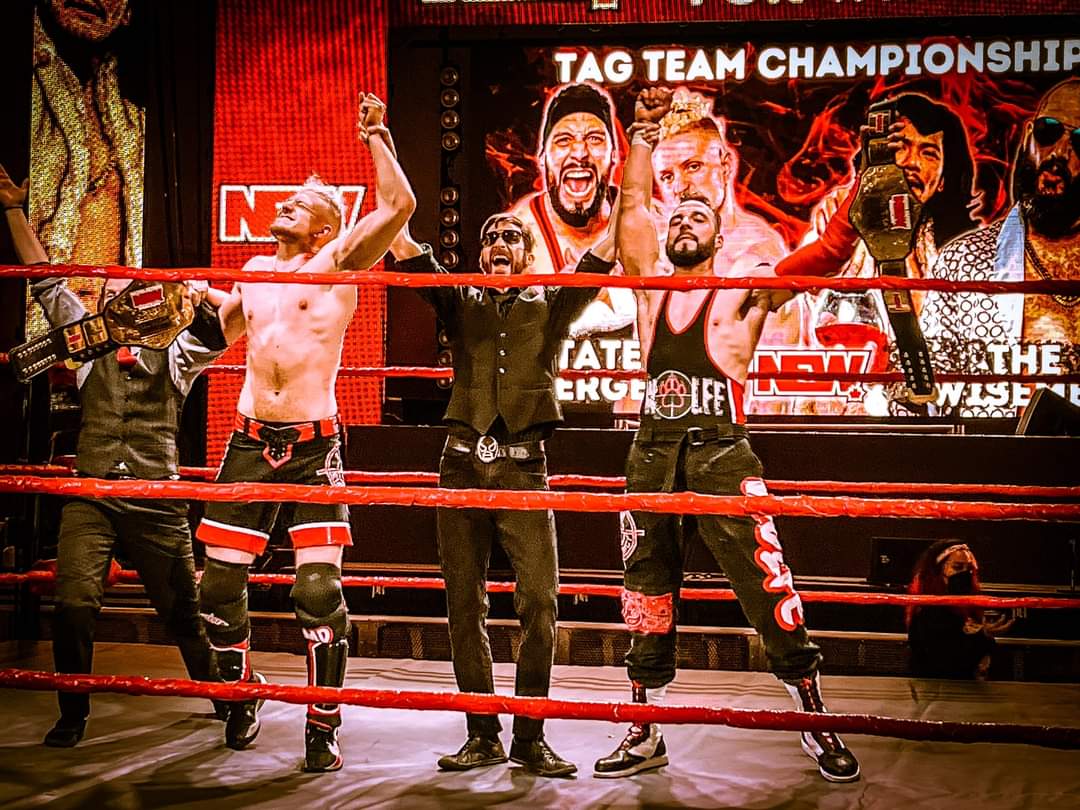 That match earned SOE the tag titles and they have been on top ever since.

Fai and Parry had high praise for their tag team champions. Fai, who worked in baseball for 14 seasons, said when he saw SOE he felt the same way he did when he saw high level prospects impress on the diamond.

“They are stars in every sense of the word and that elevates everyone in our locker room to find that extra gear that right now they definitely have,” said Fai. “Their chemistry is undeniable. There’s a Hart Foundation [vibe] to them that I think makes them incredibly fun to watch. Technical, powerful, a razor-thin line between stable and unstable – I don’t think you’ll find a better pairing in the PNW right now and that’s saying something.”

Parry said Wolfe impressed him instantly and Deville was a perfect fit when he returned from Mexico.

“When we started NEW, the first thing Rob and I noticed, like the first eyebrow raised, was how Sebastian Wolfe carried himself,” said Parry. “Physically, he’s just dominant. He works harder than anyone, he’s a total gym beast, he always brings something new to a match, his promo game is on point, and he just has respect across the board.” 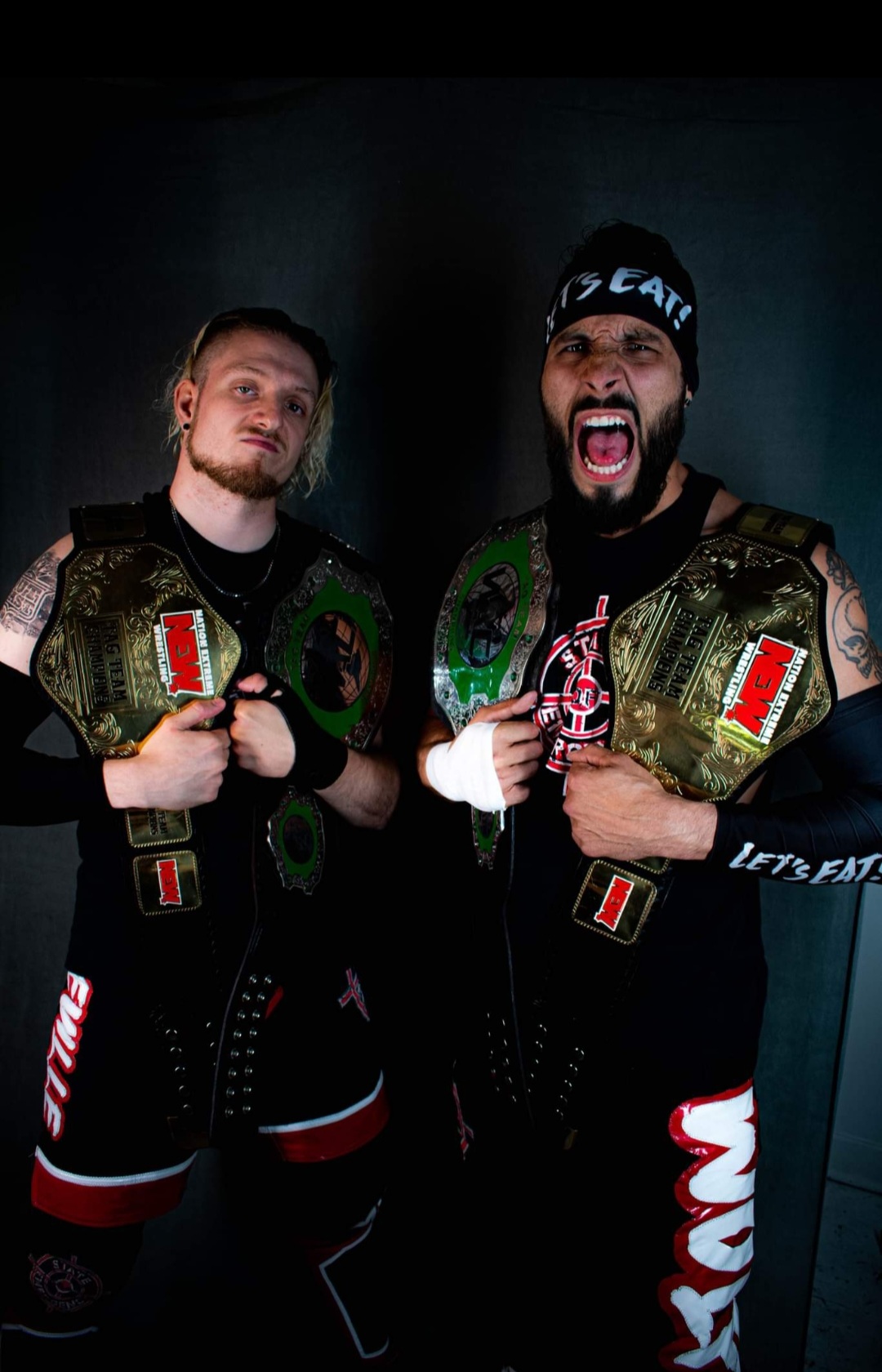 Parry said Deville brings the aerial aspect and has the same work ethic Wolfe does. “You don’t see a lot of heel teams that get as many cheers as their opponents but when SOE won the NEW tag titles, that’s as big a cheer as we’ve had at one of our shows. It’s a respect thing. You might not cheer for them, but you’ll pay to go see them. There’s something different with these two.”

A huge thrill for both members occurred in May at the Northern Fan Con in Prince George, B.C. SOE wrestled as part of WrestleCore on both nights and got to share a locker room with Bret “The Hitman” Hart, Santino Marella and the Bollywood Boyz.

“Bret Hart is my number one guy so that was really special for me,” Wolfe said. “It was an incredible weekend. You’re gearing up and Bret Hart just walks in. It’s sometimes still wild for me to think about it.”

Wolfe and Deville are not taking this weekend lightly, stating that it’s the biggest three nights of their careers. Wolfe said he believes they are in good hands by wrestling talented athletes like the Bollywood Boyz. Deville believes this is their chance.

“I don’t want to come off like I’m sounding cocky because I’m very humble and appreciative but I just feel we’ve been waiting for so long for opportunities like this,” Deville said. “I’m ready and excited for this.”

As for the future of SOE, both wrestlers are satisfied with their progress but believe they will both have futures as singles talents. But for now, State of Emergency will ride into a massive weekend and continue developing.