The ECCW/NWA Canadian Heavyweight champion Tony Baroni makes an immediate impression with skull tattoos on his left shoulder and upper back, a demon tattoo on his lower back and scars on his right arm and lip. Yet he is very much a working man’s champion. “I’m your man’s man, your regular Joe. I work a hard day’s work. I work hard in the ring.”

By day, Baroni feels very lucky to have a job outside of wrestling, working as a truck driver for the Granville Island Brewing Company, based in Vancouver. “No matter how bad the economy gets I’ll have a job because people drink whether they are happy or sad,” he told SLAM! Wrestling. 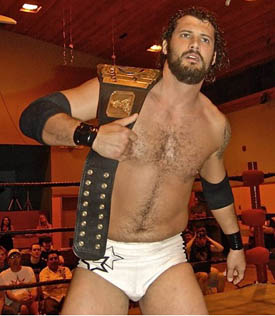 Originally from Surrey, BC, the 29-year-old Baroni really only became truly interested in professional wrestling in the third grade. “A kid moved into my neighborhood from Ontario and we became buddies. Our first sleepover he popped in a tape of the 1990 Royal Rumble and after that I was hooked. My first memory of wrestling was King Kong Bundy and the five count, but it didn’t really captivate me until 1990. I remember thinking it was awesome how at that Rumble they had a Greg Valentine versus Ronnie Garvin submission-only match. I recently had a chance to re-watch it and while it wasn’t as exciting as I remember it, it’s still a pretty good match-up.”

As a kid, Baroni, looked up to the Ultimate Warrior, but as he got older he came to appreciate the work of Arn Anderson, Tully Blanchard and Ric Flair. However, he feels that the World Championship Wrestling (WCW) Cruiserweight Division from the mid to late 1990s probably had the most influence on him. “I kind of always wanted to be the WCW Cruiserweight champion. I also liked the old school NWA style where you can work body parts.”

In his early years, Baroni’s athletic pursuits consisted of skateboarding, snowboarding, and surfing, but would later move into jujitsu, submission wrestling and eventually professional wrestling. “One of my best friends from high school was a triple belt in jujitsu so I trained with him and the Burnaby catch wrestling club, which is submission wrestling pretty much. I recently took third in my division for the catch wrestling even though I wrestled out of my normal weight class.” 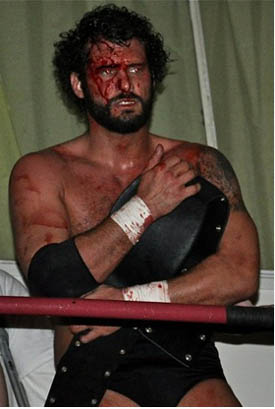 Lush said he has been very impressed by the development of his former pupil. “I was around lots when Tony first started training and was glad I could help him out a bit. He really picked things up quite a bit faster than the rest of the students at the time. He also hit the gym, which was nice, because a lot of the students really forget that just training in the ring is one part of being a wrestler. Some of my best ECCW matches were against him and I think I was able to help show him that you don’t need to do eight million moves to have a good match. After that he slowed down a bit out there and I think that’s when he really started impressing a lot of the guys who do the booking for ECCW. As well, Baroni is training with me in Catch Wrestling and he’s doing really well in that too. He’s a good dude and a great friend.”

Injuries are a fact of life for a professional wrestler. “I’ve chipped my elbows and gotten tendinitis in them, broke a lot of toes, a bone chip and have cuts and scrape. However, I trust the guys I work with in the ring,” said the 6-foot-1-1/2, 205-pound Baroni. “I’ve lived by the philosophy that if you’re not comfortable doing something [in the ring], don’t do it.” Baroni has had to wrestle with these various injuries, but has found that during the match adrenaline takes over. The injuries really only become an issue after the match once his body stiffens up a little bit. However, Baroni categorically stated that if he ever had a significant injury he wouldn’t wrestle. “I’ve learned, though, to ignore the pain over the years. Your pain tolerance increases.” 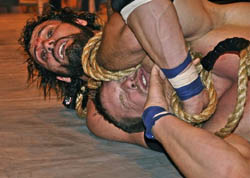 Tony Baroni uses a rope during a bout.

Though the process of becoming the ECCW/NWA Canadian Heavyweight Champion is something he remembers very fondly. “It all started when I was on the Egos & Icons tag team [with Nick Price and Jamie Diaz]. When they turned me face the fans really got behind me and it went from there.” On March 5, 2011, Baroni defeated Bishop to become ECCW Champion in a Tables, Ladders and Chairs match. A few short weeks later, he would defeat Scotty Mac in an unification bout to also become the NWA Canadian Heavyweight Champion. For Baroni, being champion is a declaration that he is worthy. “It means if you work hard you can achieve the goals you want. It shows that I am good at what I do.”

Out of the wrestlers who have never held the championship, Baroni feels Artemis Spencer is long overdue for a title shot. “He is the best technical wrestler and as one of my friends it would be great to have a match together for the title.” Another wrestler Baroni would like to have a championship match with is Jamie Diaz, one of his past stable mates from the Egos & Icons tag team. 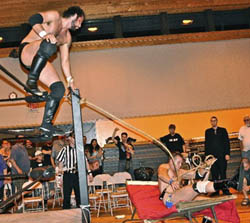 Tony Baroni prepares to leap during a TLC match.

However, for specialty matches he likes to plan out the match more. “It’s more of a safety measure for me and who I work with. The TLC matches are where I got the majority of my injuries from so I just want to make sure everyone comes out of it OK. At TLC 5, I had a fire table that went wrong and Kenny Lush got burned. I broke character to put him out.”

His favourite specialty match was the TLC 6 against Bishop because of the match quality, how their feud had been built up over a six-to-seven month period, and the fans really cared about it. Some of his favourite storylines he has been a part of includes when his Egos & Icons stable feuded with Nicole Matthews, Kenny Lush and Billy Suede, and when he turned babyface in the middle of a match involving El Phantasmo. 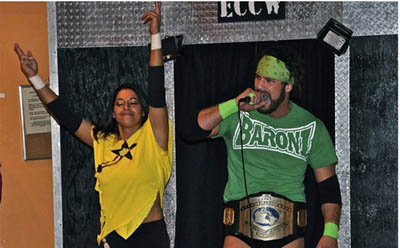 The inter-gender tag matches, particularly the ones where he had the chance to team-up with ECCW woman wrestler KC Spinelli, have been special too. “Tony Baroni is the man. Generally in life there are few people you can count on, but Tony Baroni is definitely the one percent you can,” Spinelli said. “Both in and out of the ring, Tony gives of his time helping those who need it. In the ring, you can tell by both his work and look that he takes wrestling seriously, thus making him very important to the business and the fans!” 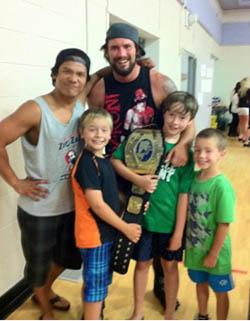 Tony Baroni poses with some fans.

When wrestling a match, Baroni likes throwing a nice hard lariat and using the Baroni Buster #2 to finish off matches. The Baroni Buster #2, Baroni describes as a Shinoki Driver to the side of the body. Other moves, Baroni likes utilizing during the course of a match are drop kicks off the top rope, the figure four, the just facelock (which is a crippler crossface without the arms), the dragon clutch (which is a cross between a camel clutch and a dragon sleeper), and two moves he doesn’t get to use that often, the head scissors and a bridging German suplex.

During these tough economic times, Baroni has seen an impact on the wrestling industry. “What money comes in to a promotion is what goes out. So if there’s no money to promote, it makes it harder to bring more fans in. At the same time, I think independent professional wrestling will never die. There will always be enough die-hard fans to keep it alive. There will always be up and downs moneywise, but it always be around.” Baroni recalls when he first came into ECCW attendance was down, but there was an ownership change, and since that time attendance has been on the rise. “The summer is always hard because people are on vacation or doing stuff, but by the fall things pick up again. The new management has done a good job getting more fans in.”

As for the future, Baroni’s ultimate goal is to wrestle in Japan and see the world. As well, Baroni found out recently that he is ranked 6th in the world for the NWA World title and would like to find a way to capitalize on it.