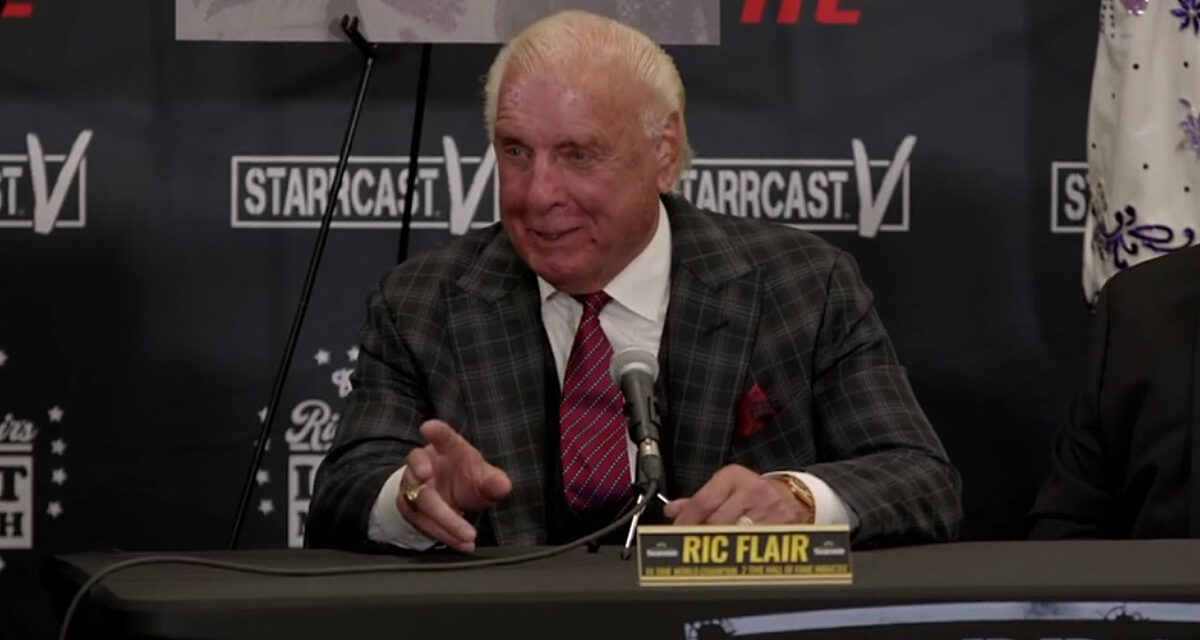 There were a lot of accolades but not a whole lot of details from the Jim Crockett Promotions Presents: Ric Flair’s Last Match press conference today.

Only two matches were revealed.

The Motor City Machine Guns will take on The Wolves, which is kind of odd since Davey Richards and Eddie Edwards were just in opposite corners during last weekend’s Slammiversary event.

Brenda Haywood, the Deputy Mayor of Nashville, also announced that July 31st has been declared Ric Flair Day in Nashville. 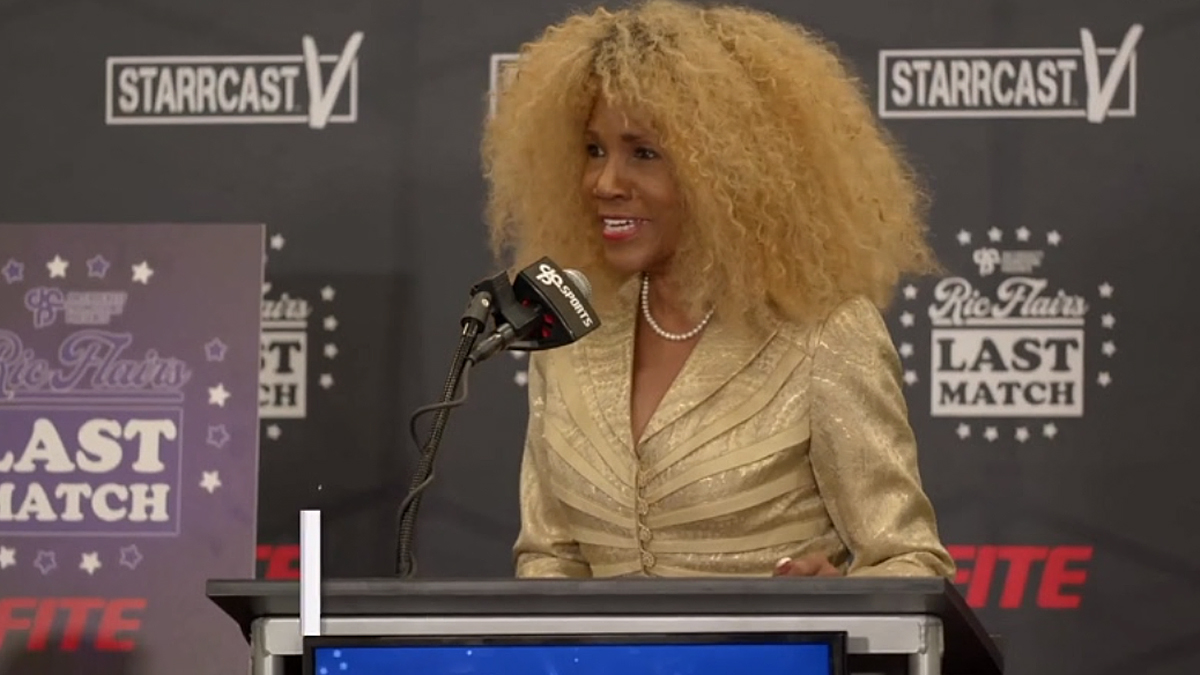 What wasn’t addressed at all though is who will be Ric Flair’s opponent(s) at the show.

“I can’t because I am not booking it. Actually, I am not. My heart is invested in this. I am just thankful for the opportunity, ” said Flair when asked who he will be facing.

The 73-year-old Flair did fire back at critics who believe the wrestling legend should stay retired. He says he has been training hard with Jay Lethal and is ready for his final match.

“The blood thinners? I just won’t take one that day. I needed to be someone I was comfortable with and Jay (Lethal) is fantastic. The more people that come to watch me, the more bumps I can take. (laughs) Now that I know I can do it, I will be flying around in front of 7,000 people, probably not at warp speed. (laughs) It was being able to run the ropes, drop down, getting back up and drilling. It is not taking the bumps. It is the timing and psychology. Those are some of the things that are missing in wrestling now. I think Jeff (Jarrett) would agree but he is in a tough position as he works for WWE. Not a lot of that psychology takes place any more. It is all scripted. I can tell you when the components of this match come together we won’t be memorizing something five minutes before we head out to the ring. We will feel it in our hearts,” said Flair.

With his incredible list of accomplishments including being a 16-time world champion, Flair still believed he had something to prove to himself which is why he agreed to the match.

The ‘Dirtiest Player in the Game’ had a warning for whomever his opponent(s) will be that night.

“People in the south they like ‘rasslin’. It used to be me and Richard Petty. It was ‘rasslin’ and racing and ‘rasslin’ has never left Nashville. So, we are going to do some ‘rasslin’. I am talking about the old days, and Jeff (Jarrett) knows what I am talking about, when guys would take a chisel, cut off the end, put it in a metal plate, put it in their fingers and that was the ‘hard way’. Boom! A chisel right in the head. Not a blade but a chisel. So, I cannot guarantee you a chisel but I will have something with me,” he laughed.

Although he is Conrad Thompson’s business partner and is helping present the event Jeff Jarrett won’t be wrestling at the show. He was at the press conference though to show his support.

“It is going to be an emotional weekend for a lot of folks. It is going to be a special night….I am just glad in so many ways that I get to be a part of it,” said Jarrett who was crucial in bringing Thompson and Flair together.

Flair ended the presser pulling a ‘rib’ on Jarrett. 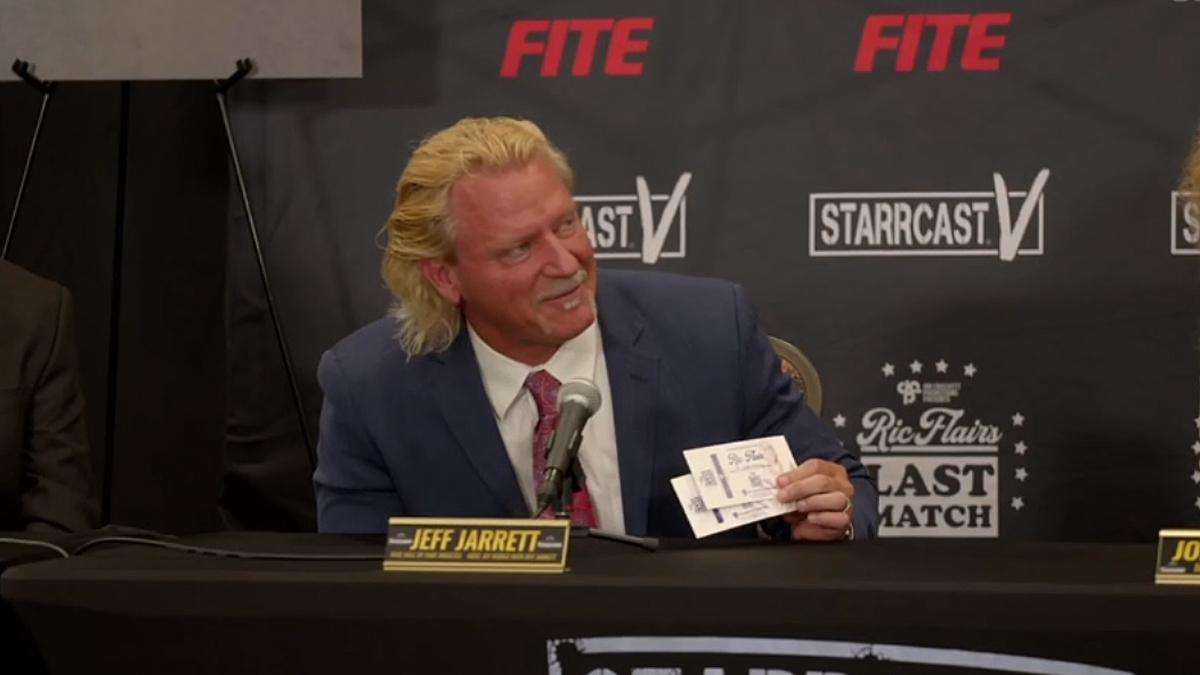 “Until he called me the greatest of all time, I was going to do this as a joke but let’s do it any way. Here’s two tickets for Jeff and his dad, front row,” Flair laughed as he handed the tickets to Jarrett.

“This is an inside joke. He is still mad at me about my Hall of Fame speech,” laughed Jarrett.

Jarrett went over and made a move to sucker punch Flair but gave him a big hug instead.

Earlier this week it was announced that the event was now being held at the Nashville Municipal Auditorium on Sunday, July 31st, instead of the Nashville Fairgrounds.

The show will also air live on Fite TV. The pre-show will begin at 6:05pm ET and the entire show is supposed to be three hours long. It is part of the Starrcast V event in Nashville.

You can find out more about the event and the different packages here.