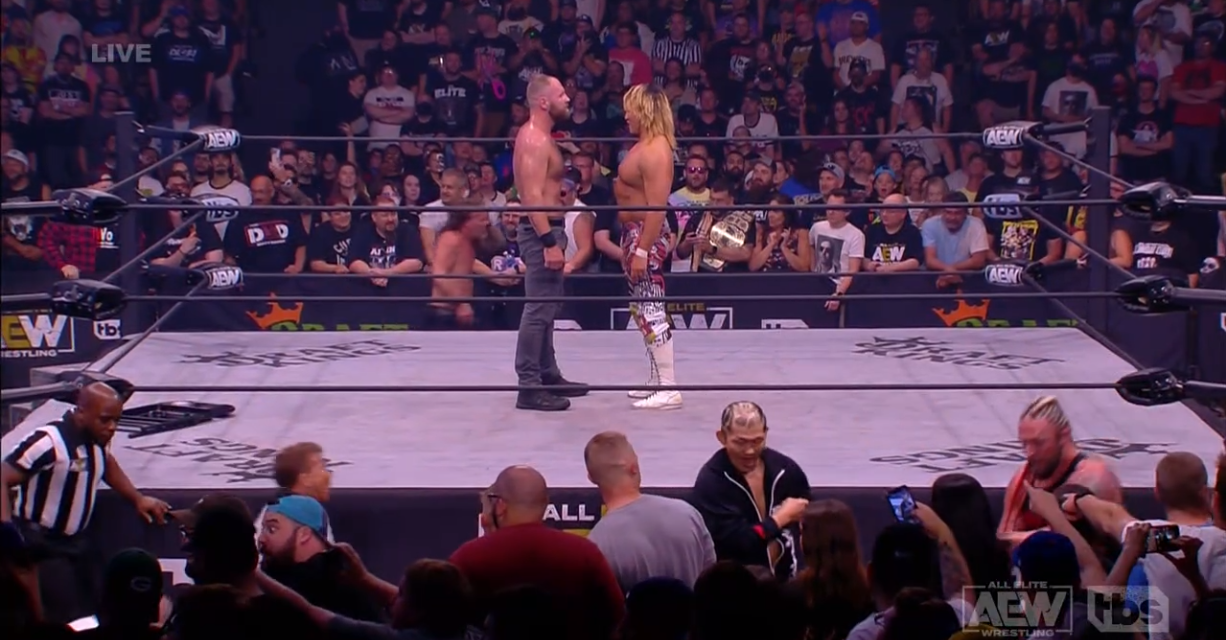 AEWxNJPW Forbidden Door is this Sunday, but that card is looking a but light. Usually AEW has months in between shows, so tonight’s Dynamite has some work to do. The recent string of injuries have not helped, and now Bryan Danielson may not be cleared to wrestle. When it rains; it pours.

Speaking of Danielson, he comes out to start the show to talk with Tony Schiavone, who asks him about his status for Forbidden Door and Blood and Guts. Danielson has good news and bad news. The good news is that this is a great week to be a fan of professional wrestling. The bad news is that he can’t be a part of it. Bryan vows to be back soon and better than ever. Bryan won’t tell us his replacement though, we will just have to wait. Zach Sabre  Jr. walks out and the two jaw at each other.

Jon Moxley is ready to make it personal against the Jericho Appreciation Society.

Roppongi Vice and Orange Cassidy vs. Will Osprey and Aussie Open

The big problem with this upcoming PPV and only having a month to build is that if you don’t want NJPW, you have no idea who half the guys on the card are. And I fall into that category. I know who Will Osprey is, but I didn’t know he led a faction, much less who is in that faction. Osprey, Mark Davis and Will Fletcher power bomb their opponents onto the ring apron. Back in the ring, Orange Cassidy gets the tag, taking down Davis and Fletcher with a hurricanrana. He drops Davis with a DDT and wants Osprey in the ring. He takes the bait, allowing Barretta and Romero to take him out. Osprey gets triple teamed in the ring, but Orange can’t get the pin after an elbow drop form up top. Osprey and Cassidy trade counters and both men go down. Davis and Romero tag in to trade chops. Romero falls victim to the tandem offense of Aussie Open. Romero blocks a kick and Davis accidently kicks his partner. All six men are in the ring. Roppongi Vice hit Fletcher with a dual knee strike. Trent takes a piledriver, but Orange breaks the pin. Barretta fights off Aussie Open, hitting a DDT on Davis. Cassidy tags in, nails the Orange Punch and covers Fletcher to get the three count.

After the match, Jeff Cobb and the Great O-Khan join their stable mates. FTR comes out to even the odds.

Sanjay Dutt is so happy that Satnam Singh’s debut went so well. Jay Lethal is coming for the ROH TV title and time is running out for Joe to defend it.

Christian Cage joins Tony Schiavone in the ring, presumably to talk abut turning on Jurassic Express last week. Cage explains that he never forgot that Jungle Boy eliminated him from the Casino Battle Royal last year. Cage didn’t come here to mentor younger talent. Christian runs down the fans and than goes after Jungle Boy’s late father. Luchasaurus has heard enough and storms to the ring. He chokes Cage in the corner, but Christian tells them they need to talk in private. Cage hugs him and the two walk to the back.

Kyle O’Reilly is withthe Young Bucks, who  will be teaming with Hikuleo and El Phantasmo at Forbidden Door against Sting, Darby Allin and two other cronies. (Their words, not mine.)

Both men start off striking at each other. Penta yanks Black off the apron and tag him out with suicide dive. In the ring, Black with a punch to the back. Penta goes up and over and hits a back stabber. Black kicks out of the pin. Penta hits a sling blade and the fight geos to the floor. Back in the ring, Penta with a cross body, The two fight on the apron. Penta gets kicked into the ring post, but answers with an enziguri. Black escapes over the top rope and connects with a round house kick. He hits a cutter in the ring. Penta sets Black on the top turnbuckle. Malakai escapes and sweeps the leg. A jumping knee strike sends Penta to the floor. Black connects with a double foot stomp. He goes up top, where Penta catches hum with an enziguri. Penta with an avalanche Fear Factor. Penta can’t make the cover right away, allowing Black to get a foot on the rope to break the pin. Black nails the back heel kicks and covers Penta for the win.

After the match, Pac stares down Black in the ring.

Miro has a message for his opponents for the All-Atlantic title and is mad at God?

Young misses a springboard moonsault, allowing Page to hit the Buckshot Lariat and pick up the win.

After the bell, Adam Cole makes his way to the ring, but Jay White also walks out. White tells Cole that he can’t be his opponent since he lost to Page twice. White approaches Hangman, telling Page that he won’t face him either. Page slaps the microphone out of his hand and the two come to blows. Adam Cole runs down to hit Page with a low blow. White pounds Page into the mat. Adam Cole grabs the IWGP belt as White picks up Page. Kuzuchika Okada’s music hits and the Rainmaker runs in to make the save.

Jade Cargill will be looking to add to the Baddies since Red Velvet is out.

Storm is taken off her feet with a high kick and rolls to the floor. Shafir distracts the ref, allowing Rose to hit her with a senton. Back in the ring, the two trade punches. A head butt sends Marina to the mat. The two go to the floor and Storm is slammed into the ring steps. Marina misses a kick and Storm hits her with a DDT. In the ring, Storm with a suplex and follows with a hip attack in the corner. Toni counters a pump handled slam and is able to roll Shafir up. She gets the three count.

After the match, Rose attacks Storm. Women’s champion, Thunder Rosa, runs in to make the save. Storm nails Rose with the title belt and then reluctantly hands it back to the champ.

Sting and Darby Allin call out Bobby Fish, then they announce that Shingo and Hiromu will team with them at Forbidden Door.

Mox goes after Jericho on the floor while Tanahashhi takes the fight to Acher in the ring. Lance catches Tanahashi will a full nelson slam and tags in Jericho. Tanahashi traps Jericho in the corner and crashes into him. Mox tags in, hammering away at Jericho. He goes as far as biting him. The fight spills to the floor. Jericho is rolled back into the ring. Sammy slows Mox up on the apron, allowing Jericho to catapult him into the bottom rope.

After a commercial break, Mox blocks a lionsault by getting his knees up on Jericho. Tanahashi tags in and tees off on Jericho. He hits a cross body and follows with senton from the middle turnbuckle. Jericho kicks out of an inside cradle. Mox with a suicide dive to take out Archer on the floor. Tanahashi goes up top and hits the high cross body. Jericho rolls through and into the Walls of Jericho. Mox with a stunner to break the hold. Archer boots Mox in the face. A sling blade takes Archer down. Mox crawls back to his corner to get the tag. Archer shrugs off clothesline attempts. Mox hits the Paradigm Shift and tags in Tanahashi. He hits a frog splash and covers to get the win.

After the match, Tanahashi and Mox have a conversation. Eddie Kingston runs down and attacks Jericho. Wheeler Yuta evens the odds, taking our Sammy. Minora Suzuki walks down the ramp, trading blows with Yuta. All the while Mox and Tanahashi just talk in the ring. The rest of the Jericho Appreciation Society join the fight. Santana and Ortiz join the brawl at ringside.

Dynamite put on another solid show, while filling out the card for Forbidden Door. Always good to see Will Osprey in action. Malakai Black versus Penta Oscuro in the All-Atlantic qualifier is a must see.