Raw report: Revenge is foremost on most everyone’s minds 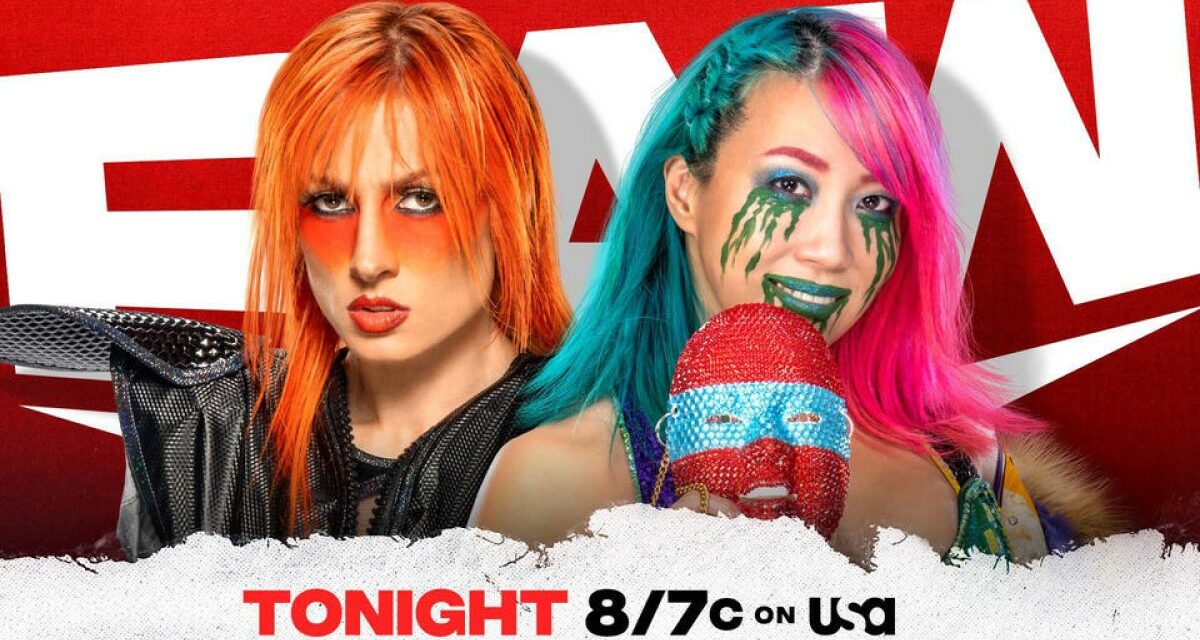 Matt Riddle is the curtain-jerker tonight and looking pleased as ever on his way down to the ring, but he very quickly gets serious and sentimental as he speaks of Randy Orton, his mentor, dude, and bro, having had a hard couple of years. Plus: Orton’s back has been bothering him for the past couple of months. On top of that, of course, they lost their tag titles to The Usos on SmackDown last week.

Riddle explains that Orton carried on with their match on SmackDown because he knew how much it meant to the fans. Riddle vows his vengeance on The Bloodline, and encourages the fans to start an RK-Bro chant. After a commercial break, The Usos are backstage and bragging about themselves for Riddle and all to hear ahead of a 6-man tag match.

Riddle and The Street Profits attack the entering Usos, with Zayn joining the fracas. Just in case you’re getting a little over-stimulated, there’s another commercial break before the match actually begins. Zayn opens with a shoulder-block on Dawkins, which does little, and Angelo responds with one of his own which sends Zayn flying. Riddle is soon into the match, but he goes after The Usos which allows Zayn to attack from behind and target his taped-up ribs.

Jey tags in and Riddle turns up the aggression, hoisting Jey up with a package-suplex before bringing in Ford who clubs Jey with a clothesline, but a blind tag lets Jimmy pull down the top rope as Ford runs the ring, sending him to the floor for a superkick and us to more commercials.

Coming back, Zayn is holding Ford in a headlock, but Ford uses a side suplex to escape — though Jey pulls Riddle to the floor to remove the possibility of tag, landing Matt’s ribs on the barricade as well. Not long afterwards, though, Ford tags Riddle anyway and he pummels both Jimmy and Zayn with a ripcord knee and an exploder suplex. Ford does his signature Superman dive onto both Usos on the floor while Riddle channels Orton with a hangman’s DDT and RKO on Zayn for the win — while The Usos get up and simply walk away from the match.

Bobby Lashley is next up in the ring, welcoming Omos and MVP out to explain to them the All Mighty Challenge. MVP starts by complaining about the faulty construction of the cage in last week’s match, but Lashley cuts him off to offer this phrase: “It’s obvious that me and Omos are not over.” Hmm … poor choice of words, or thinly-veiled self-criticism?

Lashley wants a match against MVP, with the winner picking the stipulation for the Lashley/Omos match at Hell in a Cell.

After another break Adam Pearce hears first from Dana Brooke, who wants a match with Carmella, and second from Becky Lynch, who wants Pearce to do something about her loss versus Asuka last week. Pearce grants her a match tonight against Asuka, and if she wins there will be a Triple Threat Match at Hell in a Cell between Lynch, Asuka, and Bianca Belair.

The Judgment Day has the ring reserved next, with Damian Priest getting the first mic time and chastising the fans for being sheep and for lacking courage.  Rhea Ripley grabs a mic next and encourages Liv Morgan to stop listening to the fans. Finally, Edge wraps it up by describing his group as an opportunity for anyone to rewrite their career and learn from him. He calls himself a miracle of his own hard work, and says their next member will be someone savvy and smart enough, throwing out of a bunch of names that he’s been posting on Twitter recently.

Priest and Styles are in the ring when we return from commercials, with AJ dodging standing back elbows and dropkicking Priest right into Ripley for a tag. Morgan enters with a hurricanrana on Ripley, before a headbutt stuns Liv and allows Rhea to toss her around the ring a few times. A backstabber by Morgan sends Ripley to the floor, and after Liv follows with a suicide dive Styles joins her on the outside with a kick to Priest’s head.

Another hurricanrana by Morgan, this time from the top rope, allows Liv to tag and bring in both Styles and Priest. The fight hits the floor and Priest drops Styles face-first onto the apron going into ads. Upon our return, Styles kicks Priest from the apron to the floor before tagging in Morgan. She dropkicks Ripley from the second rope and hits ObLIVion for what was likely to be a three-count before Edge places Ripley’s foot on the ropes.

Morgan tries it again moments later, but Edge holds Ripley in place which allows Ripley to counter with a pin for the victory.

After the bell, Styles takes a spear and Morgan a Riptide.

Backstage, Kevin Patrick speaks with The Miz, who is sick and tired of Cody Rhodes and plans to knock him down a peg tonight. At least there’s no Countdown to Cody this evening.

Next up is a King’s Court of all things, with Jerry Lawler welcoming Veer Mahaan to the interview set. Lawler asks a couple of easy questions, but Mahaan has nothing to say to the King at first until he grabs the mic and growls that he’s not here to joke around. Instead of explaining who he is, he plans on showing Lawler who he is. Before he puts his hands on Jerry, Mahaan turns to see Dominik and Rey Mysterio coming down to confront him. The Mysterios get in a few shots before Mahaan makes a tactical retreat.

Backstage, Sarah Schreiber is with Alexa Bliss (and Lillie). Bliss suggests some therapy for Sonya Deville, and is ready to face her former tag partner Nikki A.S.H.

As Nikki and Doudrop head to the ring, Corey Graves discusses Sasha Banka and Naomi leaving Raw last week, relinquishing their titles, and disappointing the WWE Universe. Well, that cinches it for me that this is all a work. The contemporary mindset of WWE is not to badmouth those that they want to vilify — it’s to ignore them completely. This sounds like a story, especially as the summation of the saga of Banks and Naomi is sandwiched around a plug for Payday candy bars.

Bliss offers a handshake for Nikki, but gets a forearm in the face for her efforts. A single slap sends Nikki to the floor, but after Bliss drags her into the ring by her hair Nikki unloads a series of fists on her. Not long afterwards, Bliss blocks a superplex, kicks Nikki to the mat, and finishes her with Twisted Bliss.

Backstage once again, Kevin Patrick is next up to complain about all of the attention that Cody Rhodes has been getting (and he bemoans the countdown clock as well). After a break, Sarah Schreiber is with Asuka, who once again simply mocks Lynch for being a crybaby and promises to beat her again tonight.

Cody Rhodes VS. The Miz

Miz tries to open with some chops, but Rhodes dodges them and returns with his own. They trade headlocks before Rhodes dropkicks Miz to the floor, and when Miz returns to the ring via the top rope Rhodes is waiting for him with a punch to the gut. Miz hits an awkward sunset flip after leaping backwards off the second rope, causing Corey Graves to opine that the aura of Cody Rhodes is real and throwing The Miz off his game.

After a break, Rhodes picks up the pace by hitting a Cody Cutter, which also looked a but sloppy, followed by a figure-four leglock. The Miz makes it to the ropes to break the hold, rolling to the floor. As Rhodes climbs the turnbuckles and seems to set up a moonsault, Rollins arrives to push him all the way to the floor, ending the match.

Rollins and Miz beat up on Rhodes together, with the worst of it seeing Rhodes thrown knee-first into the steel steps. Emotionally, the worst of it sees Rollins take the belt that Rhodes gave to a ringside fan and using it to slap Cody’s back. Rhodes, limping and in pain, returns the belt to the kid on his way to the back.

Kevin Owens is at ringside for this one — not on commentary, just watching for now. Gable takes a chop in the corner, with Ezekiel mocking his “Thank You” call afterwards. Chad telegraphs a backdrop, as Gorilla Monsoon would say, so Ezekiel gives him a kick before running to the ropes. Otis trips him up, and Gable follows with a series of attacks on Ezekiel’s left leg.

After Ezekiel hits a corner splash, Otis clotheslines him to the mat. The ref, though not actually seeing the deed, ejects Otis from ringside. As this is happening, Owens enters the ring but is caught before he can do anything – so he’s ejected as well.  This is followed immediately by a roll-up for Ezekiel for the win.

Ezekiel splits into the crowd, while Owens grabs a mic and challenges him for a match at Hell in a Cell — to which Ezekiel agrees.

Cody Rhodes limps up to Kevin Patrick backstage and says his beef with Rollins will end at the the upcoming PPV.

At the bell, MVP rolls out of the ring to do some warm-up stretches, then gets back in the ring only to slip out and take another walk. Returning to the ring, MVP draws the ref by feigning a knee injury, allowing Omos to clothesline Lashley flat. Lashley recovers to clothesline MVP over the ropes, but as he’s chasing his former manager around, the ref reaches the count of ten.

Lashley does get a Hurt Lock on MVP and the crowd cheers — but what’s the point?

Bianca Belair is at ringside to watch this, as Lynch tries to earn her way into a championship triple-threat match at Hell in a Cell.

Asuka, as she does customarily, starts with quick strikes, but as the fight goes to the apron Lynch runs Asuka back-first into the corner, tumbling to the floor post before going to commercial. When we return, Asuka is down on the floor and the ref is counting from three. We’re left to presume that Lynch has continued to knock Asuka to the ground repeatedly throughout the break.

The crowd comes to life for one of the few times tonight, chanting back and forth for both women before Asuka hits a combination of hand and foot strikes for a two-count. Lynch drops a charging Asuka’s head onto the second buckle and tries a pin with her feet on the ropes, but Asuka manages a kick-out. A superplex by Asuka nets another two-count, and a hip-attack sends Lynch to the floor where she soon lands in the lap of Belair.

Lynch dodges a kick, which means Asuka hits Belair in the face and knocks her out. Lynch scampers into the ring and Asuka follows, but she inexplicably lays motionless once she’s in, which allows Lynch to roll her up for the victory.

A dead crowd and a main event that left everybody involved looking weaker brought this show down. Even Ezekiel and Owens had a lacklustre night, so let’s just move on and hope that next week is better.