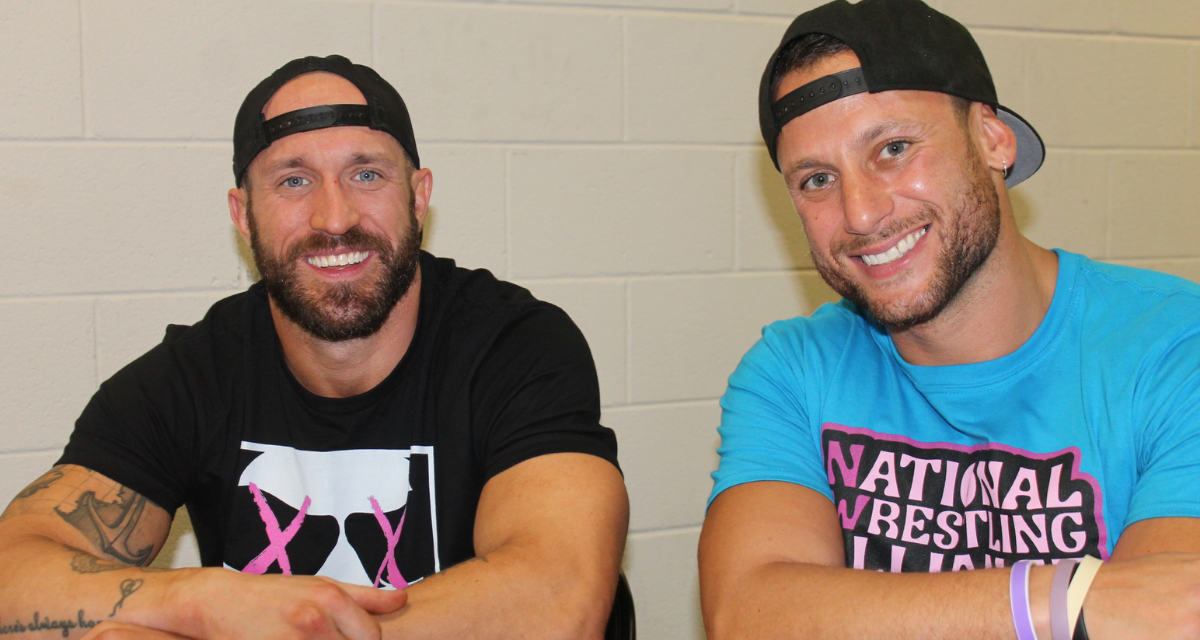 Although tag team wrestling hasn’t been as prominent in recent years as it has been historically, there’s a bit of a renaissance happening. A key name in that change is OGK – the team comprised of Matt Taven and Mike Bennett – who have been a prominent team in ROH, Impact Wrestling, and NWA, including at the recent NWA Crockett Cup tournament where they sat down with SlamWrestling.net.

“I think there will always be a place for tag team wrestling,” Taven said about the trend. “And it’s no wonder that it’s being given the spotlight right now, given how great the tag team scene is. Not just in NWA, not just in Impact, but kind of everywhere… except in one place.”

“That place” is somewhere that Mike Bennett is quite familiar with, having had two previous stints in WWE. Having been there, he can attest that the tag team division isn’t given as high a profile in that company as it is in other places.

“WWE (has) just given up on it, and I think they don’t even give it a chance,” he said. “The one guy in charge up there – it’s his company, and he makes the decisions. But just because one man doesn’t see it, I don’t think that signifies anything about the broader state of tag team wrestling.”

One company that does seem to focus on tag team wrestling is AEW, which recently purchased Ring of Honor where the OGK formed and had some major success. As to whether the duo will eventually end up in any new incarnation of ROH remains to be seen, but they would certainly relish the opportunity.

“Any plan of going back is entirely out of our hands,” Bennett said. “The way the wrestling industry works, it’s not always up to us where we go.”

“If the opportunity arises, we’d jump on it,” added Taven. “Right now we have the freedom to do whatever (we want), we’re not under any contractual obligation. We want to make the most of every thing we’ve got going on.”

Specifically to Impact, that means being part of the Honor No More faction. While the storyline originally suggested an invasion angle, it has evolved since then. Taven and Bennett provided a little more context around the motivations driving the group.

“In our heads,” he explained, “we were a group of guys who were consistently doing things the right way, consistently doing what the company told us to do. And then, for me at least, I got fired by WWE, then I got fired from Ring of Honor. It’s like, well, what the hell? I do things the right way and I still get fired? I think because it was all ROH guys coming in, everyone assumed that it’s an invasion. But it was never like that. Because we kind of looked at it as, like, our company left us high and dry. So now let’s go do it our own way.”

“It’s not like we left Ring of Honor,” Taven added, “but rather that we left a bad situation. And now we’re trying to play by own rules for a little bit, because that’s all we can count on in the end.”

While Honor No More also includes singles stars Vincent, PCO, Kenny King, and Eddie Edwards – a former ROH star who turned on the Impact locker room and joined the faction – that doesn’t mean that Taven and Bennett will compete exclusively as a team. Indeed, they believe they can compete as individuals, a team, or as a group – whatever situation they’re put into. 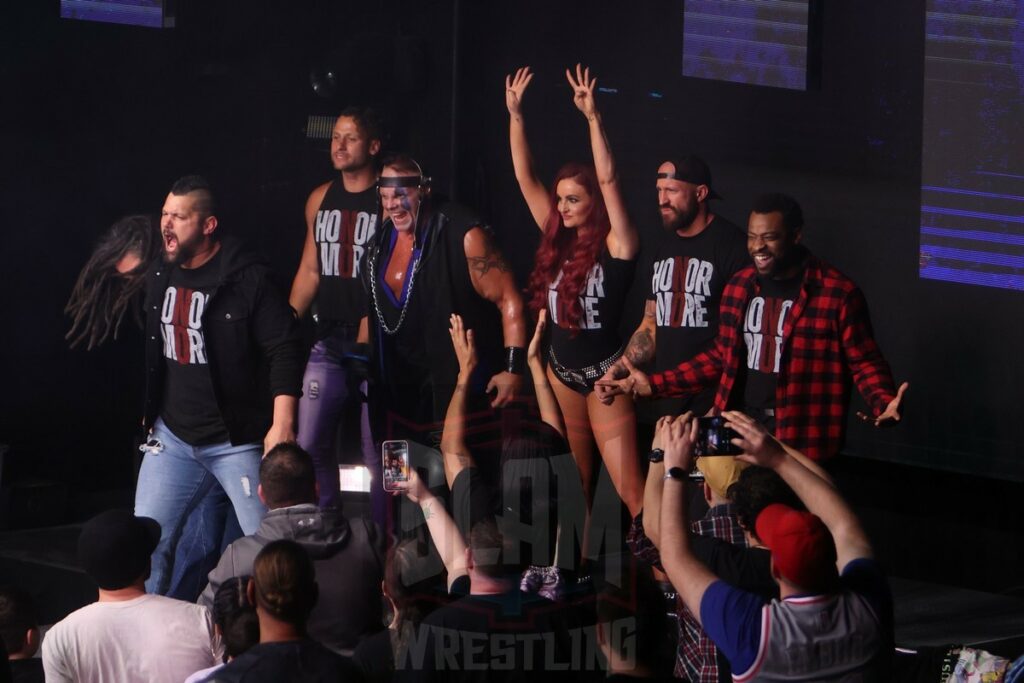 “What makes us so unique,” offered Taven, “is that both of us kind of came up as singles wrestlers, and we found this team later, after we already got established. When we got together, it was just one of the things that came together so naturally. But we both know that if we ever have to branch out and do anything singles-wise, we can find success on our own as well.”

“Even if we’re teaming,” agreed Bennett, “and an opportunity arises for Taven to go for the World Heavyweight championship or whatever, okay, I take a step back and I support him. And vice versa. It’s understood that when we need the team, we need the team. But when it’s time to go do our own thing, we then we’re there to support each other.”

That camaraderie isn’t limited to their on-screen characters, but actually extends off-screen as well. The two are proud of their bond, both on-screen and off, noting that they’ve never even had an argument in real life.

“We’ve seen teams that have clearly been forced together,” said Taven. “I’ve had other tag partners where that (was the case). With Mike, we seem to be able to flow with one another really easily. And we both have the same mindset when it comes to wrestling. So the most difficult thing (for us) is figuring out where we’re going to eat afterwards.”

“I think it helped that we were friends before we became a team,” suggested Bennett. “We traveled together, we wrestled each other a bunch of times. We wrestled so many singles matches that we understood each other. I knew where he was going to be, and he knew where I was going to be. And that dynamic extends even to when you have four guys in the ring. I don’t even have to think about where he’s going to be, I just know. I think you can genuinely see when two guys don’t match – they just don’t understand each other. Having the connection matters.”

In terms of connections, that also extends to the audience. In particular, Taven enjoys antagonizing the crowd, and actively seeks out ways to get them to dislike him.

“Watching all the heels that came before me and the little mannerisms and things that I saw them do that would really get under people’s skins,” he said, explaining how he makes himself so dislikeable. “I try to think of things that I would hate to see, and then I do that. First I started wearing the gloves. When I was a fan, if I saw someone wearing gloves, I’d hate that person. So, I was like, ‘Yeah, I’m wearing the gloves.’ So I purposely think of things that would piss me off, and do that. Wrestling’s all about reactions and the crowd and if they’re feeling something, I want to see how far I can push the thing before I get in trouble.”

With their minds constantly working on improving their craft and coming up with new ways to earn the crowd reactions, the two have little time for much else in their lives. So when they do get downtime between shows, they try to fit in some relaxation. Well, at least Taven does.

“I’m a big outdoors person. I grew up in New Hampshire, and was always in New England, and now I’m down south. Anytime I can get out, whether it’s riding my bike or going hiking or going on the beach, those are my go-to activities. When I get home, I play with my dog, and then I go out and enjoy the sunshine.”

Bennett, on the other hand, has a second job: being a dad.

“I spend a lot of time with my kids,” he said, smiling at the thought. “I can be on the road for weeks at a time, and (when I am), I’m always looking forward to just going home and seeing them.”