Mat Matters: A Timbit-y return to the Ontario indy scene 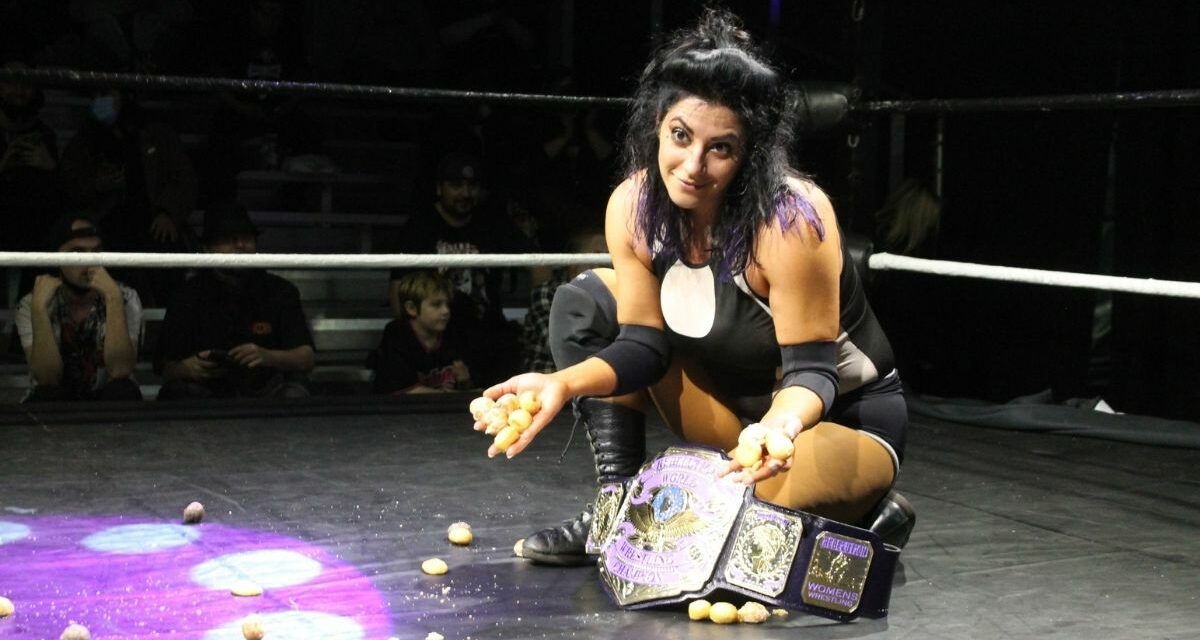 My home province, Ontario, has been one of the strictest jurisdictions in North America as far as COVID-related rules. I’m not complaining. Generally, I felt safe and protected through the pandemic. No one enjoyed the lockdowns and the restrictions, but it is what it is.

The pro wrestling scene has been particularly hampered in Ontario, with all the rules and regulations about the number of people allowed at events, gyms opening and closing, and the never-ending mask mandates. I mean, we ran a story about wrestling at drive-ins and the unique BackYard Pro. It’s only been in the last few weeks that Ontario promoters have really started to put on shows again, and with March turning into April, it will be even easier to run shows — and people will be able to attend without masks.

So there I was Saturday night at my first indy wrestling show in Ontario in at least two years. I’d gone to the NWA tapings in December in Atlanta, but that was it for wrestling in person over the lockdown, and that was a whole different experience, since part of the goal was to see Madusa Miceli work backstage as an agent, to be able to describe it for our book together. I guess the wrestling show at the Cauliflower Alley Club in Las Vegas counts too, but I rarely sit and watch those matches, choosing to wander and chat instead.

Rebelution Women’s Wrestling, an all-women’s show, was held at the Don Kolov Arena, 4880 Tomken Rd, Mississauga, which is in the Battle Arts Academy, the gym that Santino Marella / Anthony Carelli built and is now operated by others, but Carelli continues to have his hands in it, and is still everywhere, with his belts and merch.

Though I got there a little late, as I’d been at a Red Cross First Aid Training day, and needed food, it was worth the trip. While it was all going on, I found myself jotting down notes about things I missed:

Of course, there were a few things I didn’t miss: 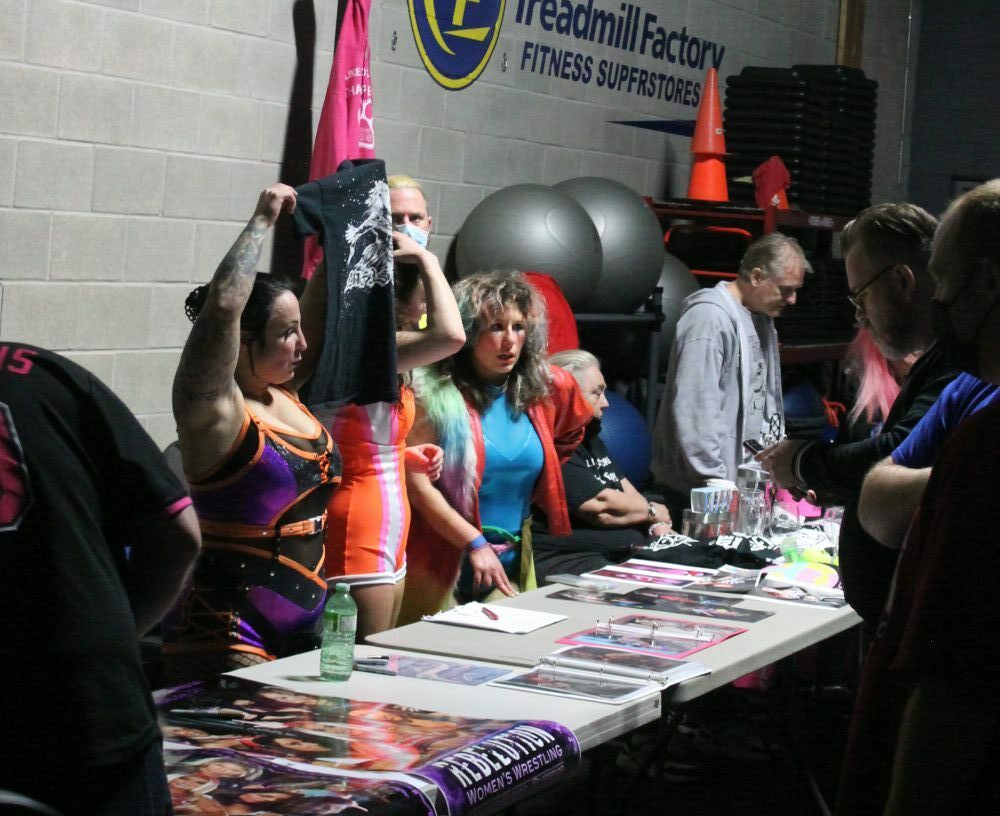 LuFisto shows off a T-shirt at the merch table. Photos by Greg Oliver

On a personal level, it was great to finally meet referee Emily Parker in person, as I knew her father, and she wrote one of the first truly great stories on the relaunched SlamWrestling site —A referee’s story: If my father could only see me now. I also got to see my old pal, referee Harry “D” Demerjian again, and, the one and only “LuFisto” Gen Goulet, who I learned so much about during the pandemic, and, while we are no longer working on her book together, I remain one of her biggest fans.

On a professional basis, getting out to shows is important. You meet people, make contacts, learn stories that can and can’t be reported, and, occasionally, see someone you’ve never seen before and they impress you … or a finish that you’d never seen.

That brings me to the finale of the night. 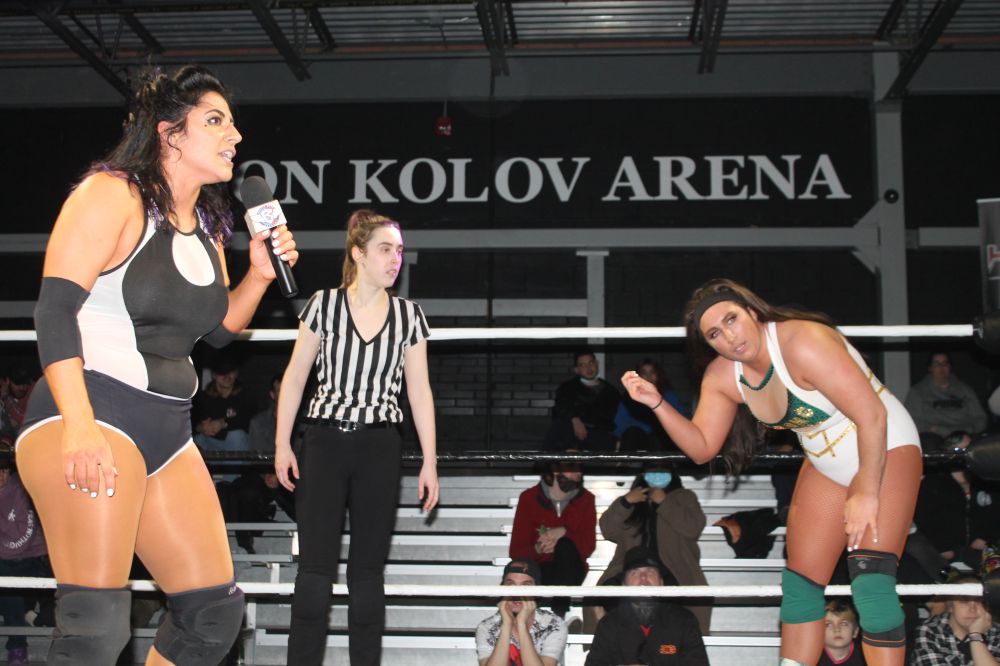 Rachael Ellering, recently of Impact Wrestling, was the promoted imported star, and she delivered big-time, facing Spinelli in a real wrestling match, with back and forth moves, respect and fan involvement. It all tied into an angle where CC Moss — who had been ejected from the building — came back to challenge Spinelli, and it ended up being a tag team match with Ellering and Spinelli beating Moss and Sabrina Kyle. There was a ref bump (poor Emily), and during that moment, Ellering went under the ring for a bag. As she held it up, everyone expected thumbtacks … but it was Tim Horton’s Timbits (donut holes for you unfamiliar). With the Timbits spread out on the mat, Ellering and Spinelli co-ordinate DDTs on their opponents onto the treats. Never seen that before. 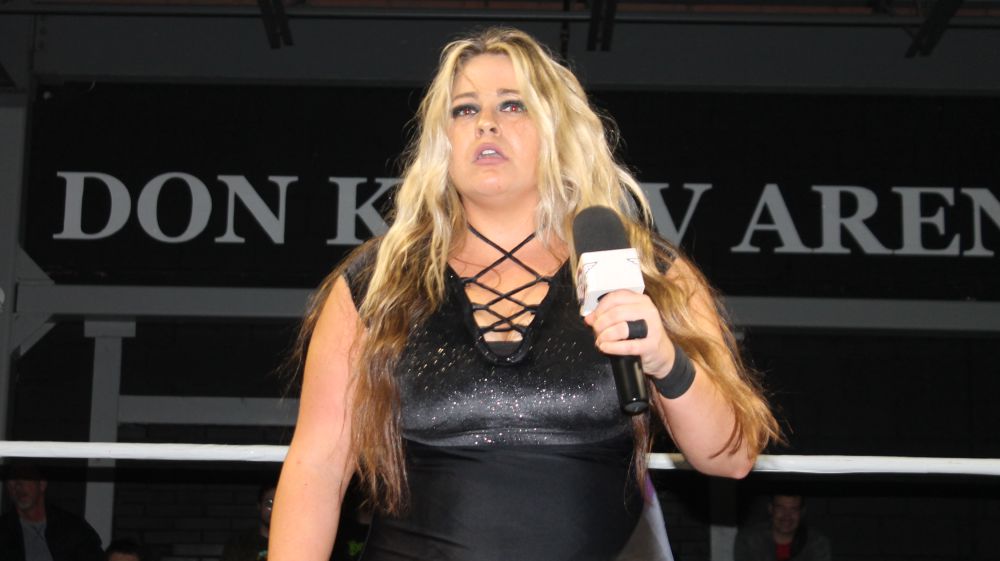 CC Moss is one to watch.

Through all this, Moss stood out. She has great facial expressions, is young, agile, and definitely one to keep an eye on.

As for me, it was a good night out, though the day truly caught up with me, and I had no energy to head out later with the gang. Maybe next time?