“If this is your first time hearing about me, then @#$% son you must be living under a rock! I’m KC Spinelli, ECCW Women’s Wrestler — YouTube search me!”

From the moment that the irrepressible KC Spinelli begins to speak about being a professional wrestler, her passion is readily apparent. 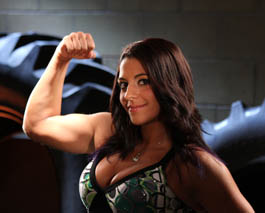 Standing at 5’4-3/4 inches and 142 pounds, Spinelli has been lighting up wrestling rings with her love for performing in the squared circle for over three years. With her brown, purple, and pink hair, brown eyes, and yellow “KC” T-shirt wrestling fans on the west coast have been taking notice from the beginning.

Originally born in Toronto, the 26-year-old Spinelli grew up in Guelph, Ontario. She recalls being exposed to professional wrestling at a very early age when she would go over to her Aunt Betty and Uncle Pat’s home to watch it with her family. “I loved it. I would play with the wrestling action figures,” she told SLAM! Wrestling.

As time passed, she noticed women’s wrestling improved by leaps and bounds. A self-described tomboy, she took part in a diverse range of athletic pursuits, including ballet, gymnastics, horseback riding, baseball, hockey, ringette, karate, judo, mai tai kickboxing, and wrestling. “I liked being active.” In high school, she took gold in amateur wrestling, and would have made the Ontario Federation of School Athletic Associations (OFSSA) championships, if not for fracturing her elbow in her last amateur match, which took over a year to heal.

Spinelli would go on to study carpentry at Conestoga College, which would eventually lead her to moving to the province of British Columbia as an apprentice. Three years ago she decided to give professional wrestling a try, beginning her training in earnest learning from Scotty Mac, Artemis Spencer, Kenny Lush, Bomber Nelson Creed, and Supergirls champion Nicole Matthews.

At first, Spinelli found it difficult breaking into the business. “It takes strong people skills. It’s hard to adapt to the fact that people may not like you. In the beginning they try to weed out the weak so that only those who are serious about becoming a professional wrestler are there.” Later on, Spinelli would also have the opportunity to learn from Lance Storm, Roddy Piper and Christopher Daniels.

One person that was very impressed by Spinelli’s tenacity and determination was one of her trainers, ECCW and ASW wrestler Kenny Lush. 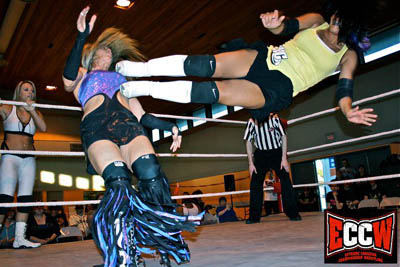 “She’s one person around here locally that had everything against her and she went out there and proved everyone wrong,” said Lush. “When she first started training at ECCW she got a lot of heat. She was always a loud mouth and she would piss a lot of people off around here that were in charge. So what she would do is go elsewhere to get booked. Eventually she was working more than anyone else. That I really respected about her. She’s done a lot to get herself noticed. She did that Wipeout TV show and the World of Hurt reality TV shows. She’s definitely come a long way, more so than anyone else in the past few years I’d say and she did it without kissing a lot of ass so that I admire about her.”

Training would be held at a facility in Coquitlam three nights a week and would involve stretching and cardio to warm up, followed initially with learning basic moves and bumps. However, on the second day Spinelli started taking back body drops. When asked if the training to become a professional wrestler was different for men and women, Spinelli stated no. “Even if you want to be a referee you go through the same training. Being a woman you feel you have to prove yourself more.”

Out of those she has encountered, Spinelli looks up to Nicole Matthews and Veronika Vice the most as role models. “You can go up to them at any time and ask for advice. They paved the way for me. They also bring out the best in me in the ring,” she said. Spinelli, though, said her personal inspiration was her mom, whom she honored by having a jaguar tattoo placed on her back.

In terms of wrestling styles, Spinelli said she was probably most influenced by Nicole Matthews’ Ring of Honor style and Veronika Vice’s WWE style of performing. “I have a good mix. I like to mat wrestle, but I do a moonsault too.” It would be the moonsault, taught to her by ECCW’s Artemis Spencer, she would use as one of her finishing moves along with a tiger bomb suplex. Each of these she named the “spin cycle” and the “spin out” respectively. 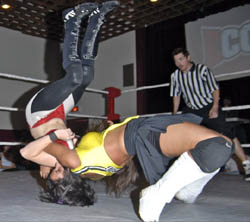 One concern Spinelli has had is injuries. So far she has suffered broken fingers and broken knuckles, but compared to others in the business, she considers herself lucky to not have had anything more major. Dealing with injuries is always a challenge. “I broke my thumb knuckle right before I had to wrestle two matches in one night, one against Veronika Vice and the other against Nicole Matthews, but I got through it.”

Spinelli loves the travel and considers it a benefit of being a professional wrestler. “I’m a billion miles away from home so it sucks, but at least when I travel for shows I get to be with my second family.” During the last three years she has wrestled for Extreme Canadian Championship Wrestling (ECCW) and All-Star Wrestling (ASW).

Spinelli’s debut match was tagging with Veronika Vice against Nicole Matthews and Enid Erkhart. She still considers it her most difficult match as it was her first time appearing in front of a crowd. A recent match in Cloverdale, British Columbia, at the ASW WrestleReunion event, on July 22, 2011, against Raven Lake, Spinelli was particularly proud of.

“There was good communication in the match and Raven was pretty on that night,” she said of the veteran grappler. While Spinelli lost that evening, the crowd was very appreciative of her performance in the ring and cheered her as she exited. Ultimately, though, she would like to work as a heel. “I would take the signs from the kids and eat the signs up!”

Some of Spinelli’s highlights in her career was winning the Halloween Howl Rumble and being voted in 2010 Women’s Wrestler of the year. The triple threat match in Coquitlam involving Veronika Vice brings back special memories for Spinelli since it was Ms. Vice’s last match for the foreseeable future.

She also has very fond memories of working inter-gender tag matches with Tony Baroni against Nicole Matthews and RICK. As it was RICK’s last match before returning to Australia, it meant a great deal to her when after the match RICK told her how he felt it was a really good match they all had. Spinelli’s partner in that match, ECCW wrestler and NWA Canadian Heavyweight Champion Tony Baroni, thinks the sky is the limit for her. “Her and I are very good friends outside of wrestling so working with her is very easy,” said Baroni. “I think her and I have similar ideas on what wrestling should be. I like it [the inter-gender tag match] was a great match we had. I hope we can team more in the future. She has all the tools to make it.”

Of those past or present that Spinelli said she would like to work with the most she listed Ayako Hamada, formerly of TNA, and WWE’s Nattie Neidhart and Beth Phoenix. Yet, as a child she always dreamed of having a wrestling match with Razor Ramon/Scott Hall in his prime.

Spinelli was on one show in the first season of the World of Hurt reality show, and was at the taping for the second season. “I hope people know it’s a reality show, but that they realize how passionate I am about it. I hope SHIMMER will see my work on the show and give me a call to come work for them.” It was recently during a taping of the show that she had the opportunity to meet and learn from Piper, including getting in the ring with the WWE Hall of Famer.

With respect to what she considers the period of time that probably represents the golden age for women’s professional wrestling, after some thought, Spinelli said that from an entertainment point-of-view it was probably the period in the late 1990s and early 2000s when the WWE’s roster consisted of Trish Stratus, Lita, Molly Holly, Victoria, Mickie James, and many others. Spinelli also felt that Chyna/Joanie Lauer had an effect on people because she was depicted as a strong woman, especially at the beginning of her career. With the WWE giving Neidhart and Phoenix more television time of late, Spinelli hopes it is a sign of a possible upswing for women’s professional wrestling, proving that women professional wrestlers “are athletes. We train just as hard as the guys if not harder because a woman’s body is harder to shape.”

When she’s away from the ring, Spinelli’s favorite pastimes involve horseback riding, sporting, and swimming at the beach. She is also an avid collector of action figures, shoes, sunglasses, hats, comic book ornaments, My Little Pony, and Disney’s Princess Jasmine.

In addition to professional wrestling, Spinelli works in security and for special events at Rogers Arena in Vancouver.

Her ultimate goal, though, is to just be able to solely wrestle for a living. “It doesn’t matter where or who, just as long as people can see it and it’s all I have to worry about.”