WWE superstar Kevin Nash was fired in storyline Monday by WWE Chief Operating Officier Triple H. Wednesday, WWE.com reported Nash had been released by the company, but there could be more to the story.

The company posted the following statement on its web site, WWE.com.

“WWE has come to terms on the release of WWE Superstar Kevin Nash as of Monday, Sept. 5, 2011. We wish Kevin the best in all future endeavors.” 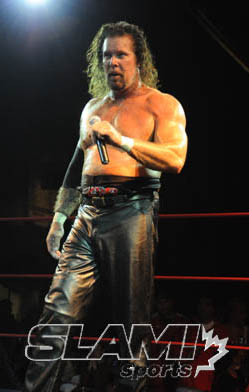 Kevin Nash at the CWI show in Brantford, Ontario, in May 2011. Photo by Mike Mastrandrea

Speculation fueled on the Internet that this wasn’t actually a release but rather part of a continuing angle, which was reported by PWInsider.com.

SLAM! Wrestling left a message with Nash seeking his side of the story. Nash returned our call and simply said, “No comment.”

He followed that up with this:

“I will not be addressing this matter again. I am moving forward with my life. Cena, it was great having the chance to get to know you.”

Nash is a former WWE Champion best known as being one of the first members of the New World Order in WCW with Scott Hall and Hulk Hogan. He returned to WWE in January for the first time since 2003 with a surprise appearance at the Royal Rumble. Nash stayed on the sidelines until SummerSlam, where he showed up following the main event WWE Championship match between CM Punk and John Cena, giving the match winner, Punk, his trademark Jackknife Power Bomb and costing him the championship.

In the following weeks, Nash has been involved in a storyline with Punk and Triple H. He was scheduled to wrestle Punk at Night of Champions but that match was abruptly changed the same night to a contest between Triple H and Punk.

Stay tuned to SLAM! Wrestling for the latest on this developing situation.