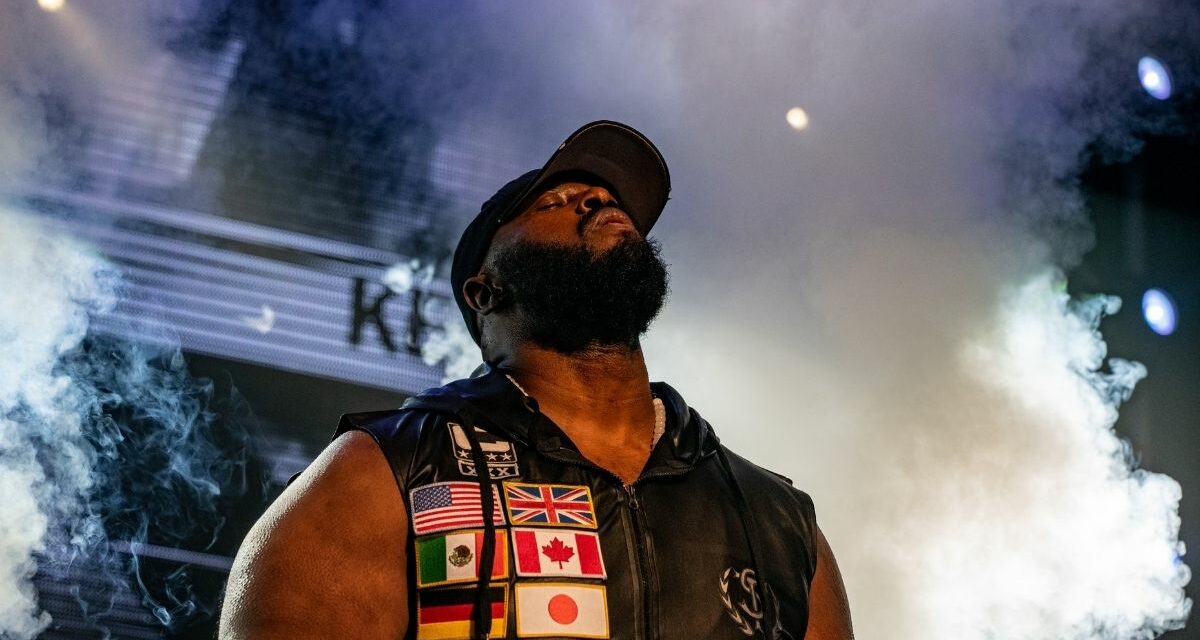 At 6-foot-1 and 350 pounds, Shane Taylor is an intimidating presence both in and out of the ring. The 36-year-old resides in Texas with his wife and two girls and, while he has worked hard for his business and wrestling accomplishments, he will never forget where he came from. Taylor grew up in East Cleveland and it was the type of life you would only be able to see on TV and movies.

“Just to give people a glimpse as to what life was like. I remember going to the gas station with my cousin Andrew to get honey buns and some chips and pop you know what I mean? Just kid stuff and I remember seeing a guy stretched out at the gas station parking lot bleeding from head to toe just laying there,” Taylor told SlamWrestling.net. “He wasn’t dead but he wasn’t going anywhere. It’s surprising now to remember we weren’t shocked and we weren’t scared. We weren’t afraid because that was normal. We just went back inside and got our stuff.”

Taylor saw and went through so much that he felt desensitized by going to funerals and seeing bodies of people he knew laid out on the street corners. It was a normal occurrence for him to experience gang activity while at home with his family. “We couldn’t sit on the couches in our house because my father and uncles would fight the drug dealers off our corner so they would come by and shoot up the house. It became normal to have to duck down, lay out on the floor and grab my brother to make sure he didn’t get hit.”

Taylor knew that this type of lifestyle ended one of two ways: “Either you die or you go to jail. There is no 401k plan for gangsters. You know what I mean?” Taylor’s father was a role model and superhero to him, and challenged Shane to be the first in his family to go to college. Taylor did just that as he earned his bachelor’s degree in business management in 2009.

As Taylor was completing Business Management, he knew that the typical day to day grind was not for him. “I learned very quickly I’ve always wanted to own my own business, which I do now. Thankfully, with Shane Taylor Promotions, LLC, I’m not a cubicle nine-to-five guy. It’s not the way I grew up, It’s not the way I am, it’s not the way I’m wired.” Taylor then compared his early life in East Cleveland to the every day desk job he knew he didn’t want. “If you can’t whoop my ass, you really can’t tell me what to do,” he said. “Like you can but we’re going to have a problem right away.”

With that major life decision out of the way, Taylor thought about what his next step in life would be. After some deliberation he thought he’d give professional wrestling a shot as it was something that he and his family did together. “Wrestling is something that provided an escape for me and my family. Everybody would come over to whoever’s house and we’d eat and have drinks and laugh and just celebrate, you know, the stuff that we were watching [wrestling].”

Once Shane Taylor broke into the wrestling business he was confronted with the dilemma of not wanting to be placed under an angry black man character. “It would been very easy and a lot of people wanted to saddle me with that [persona] but I fought very hard every single day to make sure that didn’t happen.”

Taylor also reflected as to why it’s easy for a young black man to be saddled with such a character. “The problem and why that happens is because there’s not a lot of people of color in management and ownership that understand black culture outside of whatever they see on TV. That’s not the culture. It’s maybe the 0.01% of our culture that gets magnified and marketed as the majority.”

He wanted Shane Taylor Promotions to represent something different to black culture. “What we really tried to do is present an evolution of what people saw about black culture. You’re talking about five college-educated black men in STP [Shane Taylor Promotions]. All very business savvy, very professional, but we’ll also beat your ass. We have the ability to inspire. ”

While Shane Taylor Promotions was being given the chance to portray themselves as well-educated, business savvy men who can also beat you up, there was always some doubt in the back of Taylor’s head. “I’m not going to sit here and be like, ‘There was never a doubt.’ There’s always doubt. I don’t care how motivated you are, I don’t care how driven you are, there’s something in the back of your mind that that is doubting yourself and that’s always going to be there.”

Shane Taylor Promotions consists of Shane Taylor, Moses, Kaun, and O’Shay Edwards. They were awarded the ROH faction of the year in 2021 and dominated the ROH Six-Man-Tag team division in 2021 after capturing the ROH World Six-Man Tag Team Title from MexiSquad in February 2021 and successfully defending it against the likes of La Faccion Ingobernable and Violence Unlimited, and The Foundation.

Taylor was so full of doubt that prior to his big push in Ring of Honor, he didn’t see a future in wrestling. “What you choose to do when you hear that [negativity], what you choose to do when you feel that is a whole other thing. A few years ago I thought about retiring. This is well before the TV title run. I was frustrated and just felt that even though I’ve been in this game all this time and I finally got to ROH, it’s just more of the same. I just can’t get any footing.

Luckily for the wrestling business, it was Taylor’s wife who rallied behind him and made sure he didn’t give up on the business he loved. “My wife was the one who when I told her I might be done she said, ‘F*ck that. No, no, you’re not because you’re going to hate yourself forever, if you don’t just keep pushing and see where this can go.'”

Taylor also credited former ROH and current New Japan Pro Wrestling (NJPW) commentator Kevin Kelly with making sure he stayed put in ROH. “He was one of the main guys who helped bring me in and vouched for me. He fought for me to have a deal there [ROH]. He made sure to not only text me but email me and call me and be like, ‘Just so, you know, your deal is your deal, regardless of any other circumstance, that’s your deal. We want you here.'”

Over the next 12 months Taylor went onto have a historic run with the ROH TV Title. Taylor said that it was the naysayers who ended up motivating him to strive to become better, stay put, and make the best of his rare opportunity that he was given in ROH and the wrestling business. 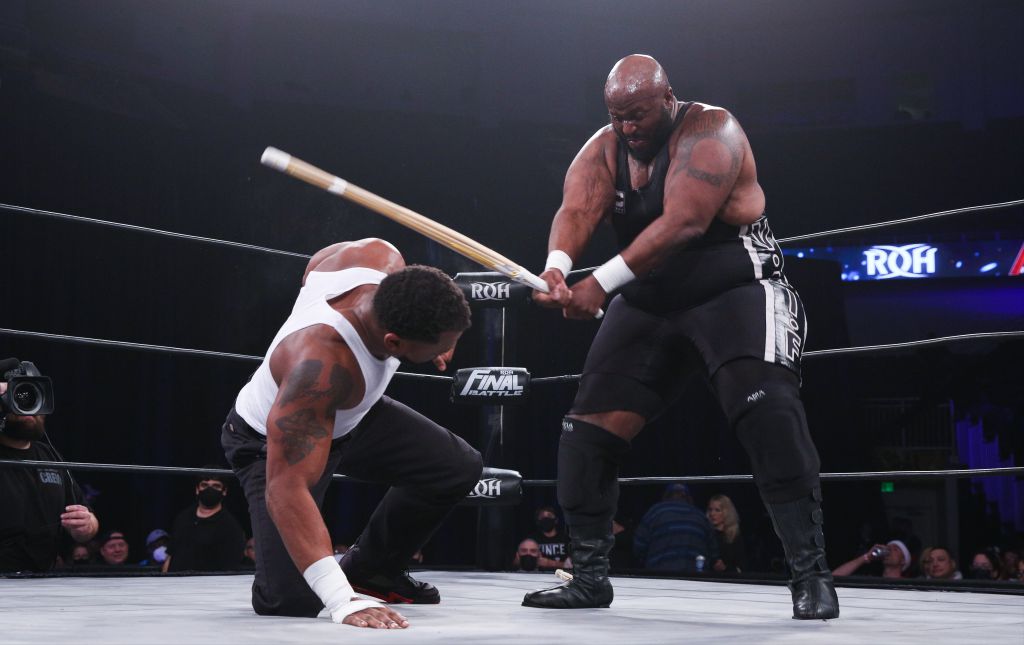 Shane Taylor swings at Kenny King in their Fight Without Honor at ROH’s Final Battle in December 2021. RING OF HONOR/Zia Hiltey

After being ROH TV champion, ROH Six-Man Tag Team champion with his Shane Taylor Promotions partners, Kaun and Moses, and being set up to have a feud with Kenny King, ROH announced that it would be going on hiatus starting January 2022. “Funny part about it is I was sleeping. We had a Zoom meeting scheduled and I remember I hadn’t gotten much sleep the night before. I was up till maybe 10, 11 in the morning. Finally I laid my two year old down for her nap and I set an alarm and was ready to take a nap. I was going to wake up in time for this meeting. I pretty much thought it was just going to be another town hall thing that we’ve done a million times. I ended up sleeping through the alarm and all of a sudden I woke up to like 50 texts and a bunch of voicemails saying, ‘Are you okay?’ ‘Is there is everything good?’ And I’m sitting here like, did someone say I die? What happened?

Once Taylor composed himself enough he started making some calls and he learned about the news. “I wasn’t shocked. The word I’d use is surprised. You never saw it coming and ROH has been so resilient for years so you’re thinking things will be alright, we’ll get through it and we’ll turn the corner. So it’s not shocking but it’s surprising.”

Taylor is optimistic about the future even though WWE is in the midst of several rounds of releases and AEW can’t sign every free agent. “There is a nervous sort of anxiousness feeling. You never know what’s going to happen. You don’t know what’s going on and I know there’s a lot of fans wondering what I’m doing next, what me and the boys are doing next and that’s only for us to know. It’s part of our strategy. Everybody’s going to be clamoring and everybody’s going to be trying to show up here and show up there. I am of the opinion that you need to trust the process. I am of the belief that sometimes it’s okay to just sit back and wait, watch things play out, watch the dust settle, and then make your move. Make that biggest impression because everybody is going to be ‘look who popped up here.'”

Taylor went onto explain his overall strategy in playing the long game with waiting to make the right move for Shane Taylor Promotions. “Once all of the moves die down and we make our move, then people are gonna get it. I’m sure it’s frustrating for some fans and I’m sure for some of the boys that were waiting for us. I believe once we get passed the sort of initial gold rush of pro wrestling that we’re in we’ll make our move and it’ll be a very impactful.”

Taylor made it very clear that Shane Taylor Promotions is a unit and he wants the best for not only himself but for his stable mates. “I believe that I can be the number one guy in a professional wrestling company here in the States. I truly think that in my last run in ROH my match with Rush proved that. I also want to lead O’Shay to be a singles champion and I want to be able to lead myself to a World Championship somewhere. I believe we have all the talent to do it. All we need is the right platform and the right opportunity and the rest will take care of itself.”

Taylor is holding his next move close to his chest and told fans to watch every promotion out there because  Shane Taylor Promotions could easily show up anywhere at anytime. “You just to just be patient, you know what I mean? When the time is right, we will make it happen.”