Shane Taylor lets his hands do the talking

Shane Taylor’s hands tell a story. Beaten and cracked, both meaty and vicious-looking, they are at the core of who he is, and not just because he moves them all over the place when talking, getting excited at the prospect of dishing out violence with them in the Ring of Honor ring.

They are also his most dangerous weapon, and make for great t-shirt slogans: “Fists 2 Faces” and “Work Hard Hit Harder.”

The Cleveland-raised Taylor comes to professional wrestling with a sporting background that includes boxing.

“I come from a very athletic background — 20 years of boxing, All-American wrestler in high school and college, college football, the whole nine,” the six-foot-1, 350-pound Taylor told SLAM! Wrestling when Ring of Honor was in Toronto in May. “In 2007, I decided I wanted to chase my dream and be a professional wrestler.”

His two primary trainers were current IWGP tag team champion Raymond Rowe of War Machine and fellow Clevelander J-Rocc, who recently had an ROH Future of Honor match. Mentors along the way include the likes of Jax Dane, Bill Collier and John McChesney. “Those are the guys that really helped and molded me into being who I am.” 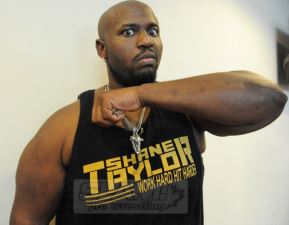 Shane Taylor is an intimidating figure. Photos by Mike Mastrandrea

Texas became a second home to “Notorious” Taylor, and there he got some coaching from veteran referee James Beard.

“James Beard is the man. James Beard has been a godsend for me. He’s done nothing but be supportive of me and what he sees as my future in this business,” said Taylor.” He’s provided me with numerous opportunities as well as guys like Luke Hawx and Wildcat Sports in New Orleans. They’ve always, from Day One, just believed in me and treated me with respect, and that’s all I’ve ever asked for was just a chance, a chance to compete and a chance to prove myself, and fail or succeed, that’s on me.”

It was when he was the booker for NWA Houston that Beard first met Taylor, and he shared his thoughts on the ROH star. “What impressed me right off about Shane was obviously, his size, but he was also one of those guys who immediately came across as a guy who showed respect and wanted to cooperate in any way he was asked,” wrote Beard in an email. “So, my first feeling about him was simply that I really liked the guy, personally. Once I put him into the ring, I found out he was very athletic and mobile for a guy his size and his intensity was very impressive. He accepted critique like a guy who really wanted to improve himself and even sought out advice, not only about what we were doing with him, but what he was involved in outside NWA Houston.”

Beard isn’t the only one high on Taylor. “I think Shane Taylor is somebody that Ring of Honor fans should have their eyes on moving forward, and it’s tough for a man that big for you not to have your eyes on him,” said ROH announcer Ian Riccaboni. “He’s well over 300 pounds, but he moves like he’s about 240. He’s just explosive, he’s powerful.” Riccaboni was pumped for Taylor’s bout with New Japan star Hirooki Goto in Toronto’s Ted Reeve Arena. While Taylor lost, he put up an impressive fight.

Before the bout, Taylor heard Riccaboni’s praise, and was appreciative, but also took the bout as a starting point for his future plans in ROH, which he signed with in December 2016.

He elaborated on his goals.

“I’m very greedy when it comes to wrestling. I want everything,” Taylor said. “There’s no cap to my ceiling. I feel like the only limits that you have are those that you place on yourself. So, of course, I want the Ring of Honor six-man titles, I want the ROH World tag team titles, the World Television title, and eventually I do want to be in that long lineage of great Ring of Honor World champions.”

The ROH tag titles seemed within his grasp in his team with Keith Lee. The Pretty Big Killers battled War Machine (Hanson & Raymond Rowe) in some epic battles, but then Lee left the promotion, and seems to be finding a home in EVOLVE and other companies.

“Teaming with Keith is great. We still do tag team on certain places. He’s the man. He’s able to do things as a big man that guys a third of his size wish that they could do. He’s able to make them look easy. He’s an athletic freak and the sky’s limit for him,” said Taylor. “You can just see with all the things that he’s doing now and the places that he’s going and the matches that he’s having, he’s making an impact on this business and he’s making a mark. I wish him nothing but success. But my job here in Ring of Honor, as it has always been just in my career, period, is to be a star with or without him.” 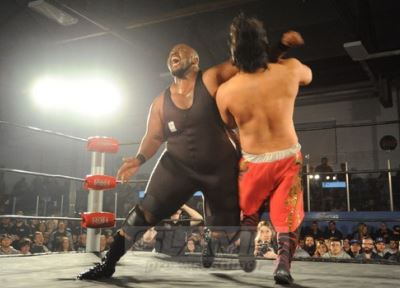 At the moment, Taylor is a part of a ROH faction called The Rebellion, along with Kenny King, Rhett Titus and Caprice Coleman. Taylor was the last man in, but believes in the cause. “The Rebellion is what Ring of Honor was supposed to be. Ring of Honor was counterculture, Ring of Honor was the alternative, they were the underground, they were punk rock, if you will. Like any underdog, when you achieve a level of success, sometimes your goals change. You stop being that scrappy underdog and you start being the franchise, you start being everything that you said that you hated,” he explained, The goal is that ROH rewards the players from The Rebellion that bust their butts continuously, instead of outsiders being dropping in and out of the ROH roster.

At the moment, Taylor and his Rebellion faction aren’t listed as a part of the Ring of Honor War of the Worlds Pay Per View event on Friday, May 12, live from New York City’s Manhattan Center Hammerstein Ballroom.

But armed with pretty impressive moves for a big guy and dangerous hands, Taylor doesn’t have to look far down the road in ROH to see glory — or competition. If it isn’t this PPV, it’ll be the next one.

“The great thing about Ring of Honor is it is full of, like it’s not just a moniker, they really do have the best wrestling on the planet. That’s the best talent,” Taylor concluded. “So I mean, anybody that you’re in the ring with on any given night, somewhere is a dream match, whether it be with a Dalton Castle or a Jay Briscoe or a Jay Lethal or an Adam Cole or Marty Scurll, whoever you want to name, that is always going to be, there are marquee guys every single night. So as far as wanting to wrestle any certain people, I say bring them all on, man. I’m ready to wrestle everybody.”