Nicole Matthews and the “Queen of Spades” Shayna Baszler are getting set to write another chapter in their long and hard-hitting rivalry. Both combatants will step foot into the ring to take part in the first ever Last Woman Standing match. No pinfall, no submission, no disqualification. Incapacitate your opponent for the count of 10, that’s the test both these women will face heading into May 13th when ECCW slams its way into the Russian Community Centre. 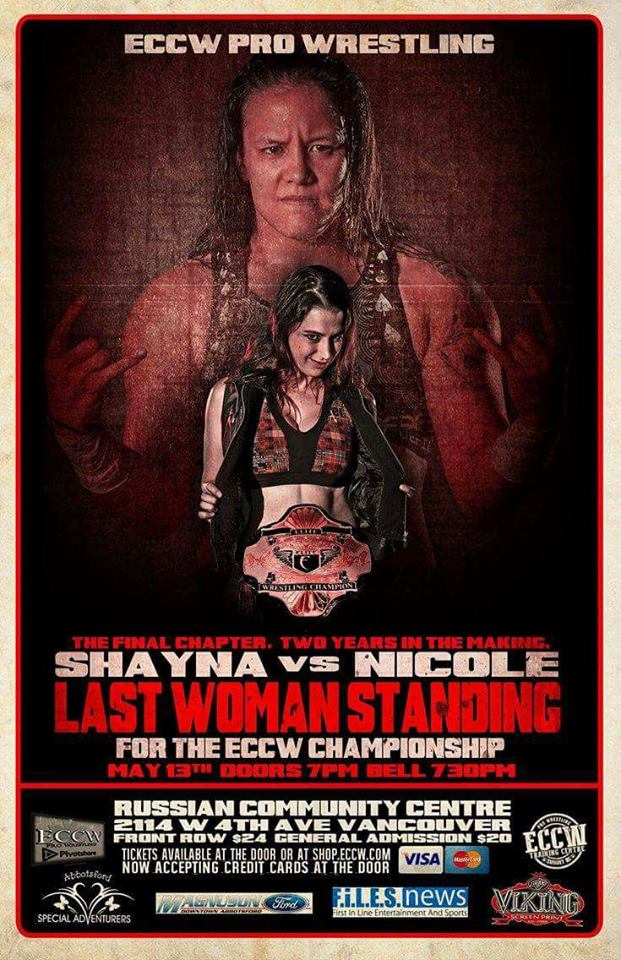 It will be the rubber match of a feud that has had a two-year build-up which started in July 2015 at Ballroom Brawl IV, During a four-way ladder match for the ECCW championship, Baszler, an MMA star turned pro wrestler, made a surprise appearance and viciously attacked Matthews by power bombing her through a ladder, costing her the ECCW title.

The attack prompted Matthews to take her frustration to Twitter, and challenge Baszler to a fight. The invitation was of no interest to Baszler, who believed her power bomb showed that she was clearly the more dominant woman. But by no means was Matthews going to let that power bomb slide. She knew she had to do something to get Baszler’s attention, so she did.

Later that year in Nevada, Baszler was taking on Cheerleader Melissa in a one-on-one match. The bout ended with Melissa scoring the pin on Baszler after grabbing the ropes. Visibly frustrated, Baszler tried to bring the referee up to speed on what had transpired, but before getting his attention, she was ambushed by Matthews. Appearing from seemingly out of nowhere, Matthews attacked Balszer with a steel chair getting even from the events of Ballroom Brawl IV.

Matthews’ plan worked, and she had Baszler full attention. This time, Baszler logged on to Twitter and admitted that there was some unfinished business between the two, setting the stage for their first in-ring bout.

The result was “Halloween Hell.” The pro wrestling experience of Nicole Matthews was put to test by the MMA star, who had gotten some pro wrestling tips from the only woman to ever graduate from the famous Hart dungeon, Natalya. Going into the match, Baszler’s submission maneuvers were well-known weapons in her arsenal, she even helped WWE superstar Nikki Bella improve her submission execution. Baszler’s submission game proved to be devastating. She forced Matthews to tap out to her dangerous hold, and won the match.

Matthews wasn’t going to let that be the end. She was going to prove that she could beat Baszler any way possible, and wanted another crack at the Queen of Spades.

Their next bout was a “Tap out or Knock out” match at Ballroom Brawl V.

Matthews made her entrance first to the roar of hundreds inside the Commodore Ballroom. Then came Baszler. Accompanied by at least 30 of her entourage, Baszler looked ready for a fight. However, when the match began, Matthews made sure that Baszler’s entourage weren’t the deciding outcome of the match. She made her way to the top rope, and jumped on to the crowd of hangers-on, knocking them all down. To finish the match, Matthews pummelled Baszler with three discus elbows, knocking her out in just over nine minutes.

Although both of their matches were filled with fierce animosity, Matthews has some admiration for Baszler heading into the RCC. 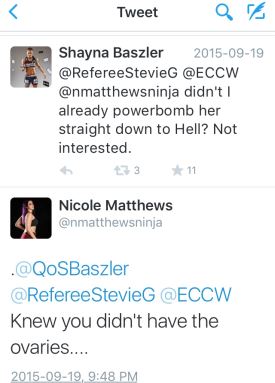 “I don’t react well to someone trying to one up me in my house,” Matthews told SLAM! Wrestling, “but it’s impossible to not respect her ability.”

Matthews has gone on to become one of the greats at ECCW, and a lot of that may have to do with her history in hardcore match types. Two of her matches at previous Ballroom Brawl shows have been under anything goes stipulation, so, according to Matthews, “[Shayna] might be surprised by what’s in store for her.”

But this match, just like one of the previous ones, was also made via social media. When Matthews put out the challenge on Twitter for this to be a Last Woman Standing match, Baszler quickly accepted the challenge, setting the stage for an historic match.

Jeff Duncan, co-owner of ECCW, believes we may never see something like this again. “Over two years, these women have given our fans something truly unique, in terms of matches, visuals and storylines,” Duncan said, “I hope everyone realizes how special this is.”