Kenny King walked onto the second season of WWE Tough Enough with zero experience in professional wrestling. Now, almost a decade later, he has very concrete plans to walk away with the Ring of Honor tag team titles any day now.

It’s been quite a ride for the 29-year-old King (Kenny Layne), who had always been a wrestling fan growing up in Florida, but whose natural athletic skills had him playing strong safety in college football. 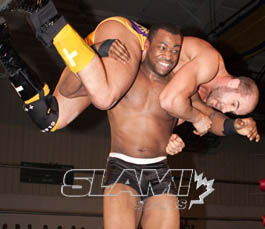 The nomadic Layne didn’t find a real home for his football skills, though, starting at Florida State, then transferring to the University of South Florida. The next relocation west is still his home — Las Vegas.

“I never had any wrestling experience before Tough Enough. I never, ever wrestled. I’m a football player, through and through,” King told SLAM! Wrestling. “I had just transferred to UNLV in Las Vegas, and I was going to play football there, but I had to redshirt that particular season. On my way to class, I saw an ad for Tough Enough II, and I remembered watching the first Tough Enough, and remember thinking to myself, ‘Man, those guys aren’t even athletes. I could do that.'”

Finishing in the final four of Tough Enough II (won by Jackie Gayda and Linda Miles, a.k.a. Shaniqua in WWE), he knew his career path was laid out, and looking back, he recognizes he was pretty fortunate.

“I can honestly say that I think that my pro wrestling training story is that I’ve had some of the best training you could ever have. I was initially trained by WWE superstars Al Snow, Bob Holly, Chavo Guerrero and Ivory — that sort of contemporary training,” he said.

In Las Vegas, he got to train with former AWA World champion Nick Bockwinkel and Scott Casey.

“Then to kind of go to finishing school, if you will, with old-school legends, and have them put the finishing touches on my training,” he marveled.

Bockwinkel “was so instrumental in my promo skills and knowing what to say and when to say it, and how to say things and how not to say certain things. A lot my early promo time was spent with Nick Bockwinkel, and I can honestly say that’s one of the reasons why I’m able to cut such good promos,” he said.

“Scott Casey, his training style was completely different than that, because he was more of on in-ring dynamics. It was amazing to be able to spend time with those guys, and learn from all those years of experience in the ring.”

Like most indy workers, he took bookings where he could, learning along the way. Brushes with greatness happened too.

While working for Ultimate Pro Wrestling in Anaheim, California, King came up against Mike Mizanin, known today simply as The Miz.

“The thing about Mike is that Mike always had the passion. If you have the passion and the drive, then you can work on your skill set,” King recalled. “So that’s what Mike has always had, right from Day 1. Wrestling’s always been his thing, his main thing. He could probably have gone off and done some sleazy ass movies or TV shows or whatever based off The Real World fame, but he came back to wrestling and always wanted to be a champion in wrestling — and look at him now! I’ve got nothing but respect for the guy. I’m really proud to have been in the early part of his career.”

In late 2005, King started working for TNA, though fans can be forgiven if they don’t remember him, as he was used mostly as cannon fodder for the big stars. He lasted until August 2006.

“The way that I see it, my TNA experience, I had the privilege of being in the ring with some of the best wrestlers in the world, some guys that I looked up to, The Dudley Boys, Jeff Jarrett, Rhino. I look back at that as a learning experience in wrestling,” he said. TNA was also where he first met influences such as A.J. Styles and Christopher Daniels. “At that time, TNA was still, it was still about Total Non-Stop Action, it was still good, if you want to call it that. … it was still about the wrestling. So you had guys that were masters of their craft that were doing what they do best, so it was definitely a learning experience for me. It was definitely a cup of coffee, but I can look back on it and say it definitely helped me.”

More than ever, King knows now the importance of friendships on the road, and having someone put in a good word for you with a bigger company. Just as Roderick Strong was the one who helped him get to the next level, he’s got his eye open for promising young stars, whether he’s working on indies or bigger companies such as Pro Wrestling Guerrilla.

“It’s kind of the business, the way things work. If nobody helps me, if nobody felt that I was talented and said something to somebody, then I may not be where I am today,” King said. “I know Roderick Strong was instrumental in getting me a look at Ring of Honor, and I’ll always be thankful to him for that. So I’m always looking for guys, and I’m always telling guys if you want to get to a different place, like Ring of Honor or TNA or WWE, you always have to be, you have to get your face out there, show up and things like that. I always help a guy get over if I can.”

In Ring of Honor, King has formed the All Night Express with Rhett Titus, one of the current challengers for the ROH tag titles held by Shelton Benjamin and Charlie Haas.

It’s a stacked tag team division in ROH, he said, listing the champs, The American Wolves (Eddie Edwards and Davey Richards), the Briscoes, Kyle O’Reilly and Adam Cole, and the Kings of Wrestling (Chris Hero and Claudio Castagnoli).

“You have six of the best tag teams in the world in Ring of Honor, and we can all go. Put any combination of us together, you’re going to have a tag team classic,” he promised.

The interchangeable teams is especially rare today. “That’s something you haven’t seen in a really long time. I think it’s disrespectful to tag team wrestling as to what it’s been relegated to in some of the other companies, just guys that are a mismatched and thrown together, nobody has double team moves, no one has tag team finishes.” 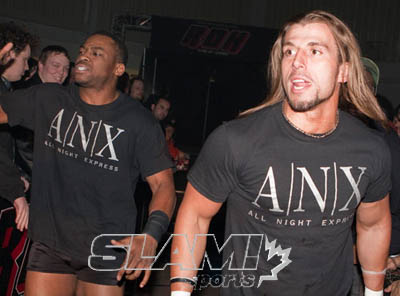 The All Night Express, Kenny King and Rhett Titus, at the Ring of Honor 9th Anniversary show. Photo by Ricky Havlik, RickyHavlik.com

He shared a little of the insight into the moves than he and Titus come up with as a team.

“Sometimes it’s sitting down and saying, ‘Okay, what can we do?’ A lot of it is, and I can maybe speak for the some of the other tag teams, a lot of it is just a combination of talent, and saying, ‘I know what my partner can do this, and I can do this. So how can we maximize both of those things and utilize that as a team, and to be cohesive with it?’ I think that’s how a lot of our tag team moves have come about, we know each other so well, we know what we do well, and we can put things together based on that.”

Though there have been moments when it looked like King or Titus could have struck out on their own in ROH, they have remained a team, and loyal to each other.

“We’re going to get the tag belts. That is priority number one, above any singles belts. We both made that our priority, and we’ve both made a commitment to each other to that before anything,” said King. “We’ve been working too hard as a unit to get so close and just say, ‘Nah, there’s other stuff out there.’ We’re a team. I think that’s what makes us such a great team is that we’re committed to each other. That’s priority number one, to knock off whomever’s got the belts and take them.”

His loyalty and enjoyment working for Ring of Honor is in large part due to the crowds it attracts. This weekend, the ROH crews invade Dearborn, Michigan, on Friday, and then head up the 401 to Toronto for Saturday night.

“The fanbase of Ring of Honor is what I first fell in love with. When I first, in 2007, started working Ring of Honor shows, I was listening to how intense and rabid these guys and women are. They come to our shows, and they are emotionally invested in everything that’s going on. We feel that, and they feed off of us, and we feed off of them. It’s really something that needs to be seen,” he said, continuing.

“I think that’s why we have such dedicated and loyal fans, because anyone who’s ever seen a Ring of Honor show live knows that we’re coming to bring it, and they’ll see something they wouldn’t see normally at another wrestling show. They’re going to see a brand of intensity, they’re going to see a style of wrestling that they have to come to Ring of Honor to see. And that’s why, even without a TV deal, with just iPPVs and DVDs, we get fans that come every time we’re in that city, because we’re going to bring them something that they can’t see anywhere else.”