Consider him your brother from another mother. Better yet — your bruddah from anuddah muddah.

Jimmy “Superfly” Snuka considers you a member of his family, and he’s not afraid to say he loves you.

“Love you, bruddah,” he told me, no more than two seconds into our recent phone conversation, “and I love your family. My love to everyone.” 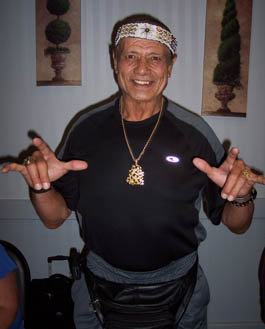 Happy birthday, Superfly! We love you too! Photo by Greg Oliver.

Unsure of how to respond to such affection, never having spoken to Snuka before, I haltingly replied that I loved him too.

Snuka would go on to utter the word “love” another 17 times during our 20-minute chat, and I lost track of how many times he called me bruddah.

Such an outpouring of emotion may seem a tad peculiar coming from a guy who has spent more than 40 years bonking his head against other people’s heads, and squashing them beneath his trademark splash from the top rope — but lots of things about Snuka are a tad peculiar. His penchant for leaping from dangerously high precipices, his marginally intelligible promos, his abject refusal to hang up his tiger-print trunks despite his advancing years — these are just some of the loveable quirks that make Snuka one of wrestling’s most unforgettable stars.

To commemorate the Superfly’s enduring uniqueness, some of wrestling’s greatest human cartoons — The Honky Tonk Man, Brutus “The Barber” Beefcake, Doink the Clown and many more — are throwing Snuka a birthday bash this Saturday in Somerset, New Jersey.

The event will be hosted by Mick Foley, who often cites Snuka’s infamous 1983 leap from atop a steel cage onto Don Muraco as the epiphany moment that inspired him to become a professional wrestler (and to hurl himself off of cages).

Snuka, not surprisingly, says he loves that story. “It pumps me up every time I hear it,” he said. “(Foley) says I’m the reason he got into the business — now that’s what you call love, bruddah.”

The flying Fijian has been feeling the love since debuting in Hawaii as Jimmy Kealoha, and later gaining worldwide notoriety thanks to his mid-’80s feud with Rowdy Roddy Piper in the then-booming World Wrestling Federation (a feud that Snuka says could be resurrected today and draw big bucks). Snuka has appeared periodically in WWE over the past few years, most notably in a losing effort with tag partners Piper and Ricky “The Dragon” Steamboat against Chris Jericho.

During all his years in wrestling, Snuka’s has never failed to flash his trademark gesture — the three-fingered “I love you” salute — before leaping from the top rope, and he still insists the sentiment was always genuine. “It’s how I showed everybody how I feel.”

While Snuka’s upcoming 68th birthday bash might not be quite as glitzy and star-studded as The Rock’s recent birthday celebration on Monday Night Raw, it promises to be a lighthearted, nostalgic affair for veteran wrestlers and fans alike. The festivities at Somerset’s Garden State Exhibit Center will start with an autograph session, followed by a cake presentation and finally a full wrestling card featuring all the former WWE legends (minus Foley).

The show will almost certainly culminate in the most fitting way: with Snuka hurling himself off the top turnbuckle and onto an ill-fated foe.

Even as he’s pushing 70, Snuka unleashes the “Superfly” splash nearly every single time he wrestles (though sometimes from the second rope rather than the top).

“Oh yeah, I still fly,” he said. “Always, bruddah. I always do it for the fans. I give them what they want, because I love them all, bruddah.”

As a child, Colin Hunter wore out a Coliseum Home Video VHS tape by endlessly rewinding and rewatching, frame by frame, the footage of Jimmy Snuka leaping from the top of a steel cage onto Don Muraco. You can reach Colin at [email protected], bruddah.