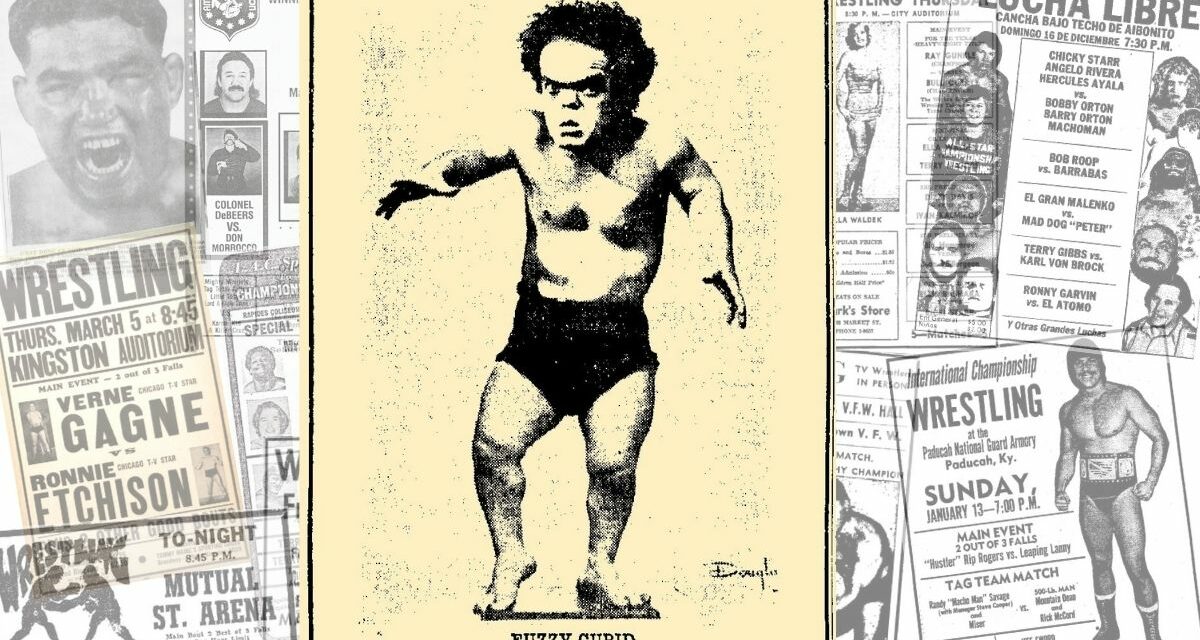 Publicity photos are a big part of pro wrestling … or at least they used to be.

A wrestler would hire a photographer and then get publicity photos printed up, both for sale at shows, but more importantly, they were a part of packages that were sent ahead to promoters in other towns. Often, their height, weight, or nickname, would be listed too.

A promoter would decide, often just based on a publicity photo, whether to use someone or not; they’d also write letters to the other promoters seeking information on the prospective hire.

Those publicity photos were also given to newspapers for, well, publicity! They’d often get filed in the newspaper library, which in common terms, was called the morgue. (I should know, since I worked at the Toronto Sun library for three years.)

By this point, I have seen thousands of publicity photos, and have gotten a feel for them. Every photographer had a style. Tony Lanza, in Montreal, once showed me his basement, where he had hollowed out part of the floor so the giants could sit down so they would be better aligned with the height of his camera; his pub pics are easy to identify with the PHOTO LANZA stamp on the front, bottom right corner. The L’il Al Vasseur photos almost all consist of the wrestlers posed in front these unique drapes. WWF and WCW were great with those promo photos, and for a while in the 1990s, SlamWrestling.net would get a package every year with some of the key performers.

A wrestler could use the same promo photo for years. Now, with digital technology, they can have a new one every week if they want.

This is a roundabout way of getting to a photo that I hadn’t seen — this one of Fuzzy Cupid doing one of the weirdest poses I’ve ever seen in a publicity shot.

It’s from the Dunkirk (New York) Evening Observer, promoting a show on October 20, 1956, but that’s kind of immaterial. Below is the publicity photo I’ve seen countless times for Fuzzy Cupid (real name Leon Stap). Lanza took it, as so many of the early little people came out of Montreal too. 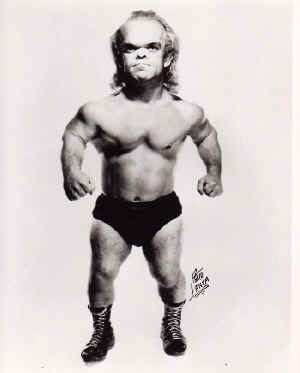 There’s so much to love about the 1956 shot of Fuzzy Cupid in the newspaper. What’s he doing? Sneaking in on tippy-toes? Is that supposed to be menacing? So many unanswered questions. The hair frizzed up is awesome.

It’s like the photographer was playing up Cupid’s dwarfism, with the disproportion of body parts, compared to a what was once called a “midget” but is now simply a little person, who is normally proportioned.

The promoter is making a weird assertion too — “The Greatest Show Now on Earth!” … what, are you saying the little people weren’t on Earth before? But the promoter — likely Henry Gilbert, with talent being booked out of Buffalo, which was controlled by Pedro Martinez — also has to note that he “is spending extra money to bring the outstanding supporting card.” Whatta guy.

Anyhoo, some notes on the participants:

While Lord Littlebrook was not, in fact, royalty, these four little people basically are, as four of the top “midget wrestlers” in history. Brook’s story has been told often — be sure to read our long obituary — but a lot less is known about the rest.

Fuzzy was born on September 24, 1928, in Newport, Rhode Island, and years later, saw wrestling in Galveston, Texas, and was sent to Detroit for training under Bert Rubi and Jack Britton. He debuted in 1951, and died in 1976.

There have been a couple of wrestlers under the Ivan the Terrible name (big and small), but this one is Charles “Charlie” Frassrand, who was raised in Chattanooga, Tennessee. His family noted that he died in a bar fight in the 1970s.

Hi Sky Lee is an amusing mix-up for the man, Robert Leedy, who fans know as Sky Hi Lee. He was a giant of a man, and there are gigantic stories of his consumption of both food and alcohol. He died in 1974.

Here we have two football players who got into pro wrestling.

Zvonkin’s football days date back to the Hamilton Tigers and Flying Wildcats, and he competed in discus for Canada in the 1930 Empire Games (now called the Commonwealth Games), which were in his adopted home of Hamilton, Ontario. He wrestled into the 1950s, and then showed and judged purebred dogs around the world. His widow, Jean, tells some great stories on Abe in this 2005 feature.

The other guy went to Syracuse University, where he wrestled and played football, and swam … and ended up in pro wrestling. It wasn’t until Beyer cut up a women’s girdle for a mask, becoming The Destroyer, that his career soared, straight to the Pro Wrestling Hall of Fame. Beyer died in 2019, and we have a ton of stories on him in our Destroyer story archive.