After his football and wrestling career petered out, Abe Zvonkin — the last name in Canadian pro wrestling — let his life turn to the dogs. Literally.

Zvonkin, who died in 2002 at age 91, turned to showing and judging purebred dogs around the world and running a dog grooming business in the 1950s with his wife of 73 years, Jean. 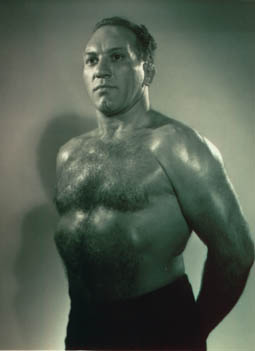 “He did very well with his dogs. He showed them and took great care of them. He used to have quite a few of them, too,” recalled Jean Zvonkin.

She laughed at some of the memories.

“We travelled a lot. We had three children, two boys and a girl. We bought a big trailer — we called it a trailer then — and we decided that he would take us along with him wherever he was. He didn’t wrestle much in Canada, it was mostly in the States. We went with him, the whole family travelled with him and with the dogs!

“I remember going down Broadway in New York in the trailer with the three kids and seven dogs! It was a little odd. Our life has always been a little different.”

Born March 6, 1910, in New York City, NY, to Russian immigrants, Zvonkin came to Canada with his family when he was two years old. He’d grow into a big lad for the time, topping out at 6 foot, and 220 pounds.

While at Queen’s University in Kingston, Ontario studying education and playing football (he was an OUA/OQIFC Conference All-Star and a Football All-Canadian), he began to learn amateur wrestling. Eventually, he met the influential Whipper Billy Watson, who encouraged Abe to give the pro wrestling circuit a whirl.

Historian Don Luce of Batavia, NY, has established that Zvonkin’s first match was on March 28, 1944, a victory over Al “Bunny” Dunlop by disqualification.

In 1989, Luce got the chance to speak with Zvonkin about his wrestling career.

“Back in the 1950s I had watched this man in his ring battles over Buffalo television. Abe always was the villain of the crowd, during his wrestling contests,” said Luce. “As Abe was one of the first professional wrestlers that I ever tried to contact, I started to talk about his football days. Abe said in his day, he was like a semi-pro football player. He never made much in that line.”

During his wrestling career, Zvonkin was known under many aliases, which is surprising considering that he was a well-known tackle on the gridiron.

Zvonkin was Mr. X and The Purple Phantom in 1949-50. In New Zealand, he was Abe Zhukov, playing off his legitimate Russian heritage. He was Mr. E in Alberta during 1954, and ran into a very young Sandy Scott. “Abe was the first guy out in Calgary that I wrestled that hit me in the nose and broke my nose,” recalled Scott. Was it deserved? “He thinks I did,” Scott chuckled.

In Mississippi, he started teaming with Jack Dillon, and they had traveled all the way to the New England states. They were the Purple Phantom brothers in the Boston area, wrestling down as far as Washington, D.C.

When Luce talked with Zvonkin, he asked Abe about his alias of Gino “Red” Vagnone on the advice of wrestling historian Bob Nitsche. “Abe laughed and said that when he went to Detroit to wrestle, the promoter told him that he looked like Gino, so he was billed as Tony ‘Red’ Vagnone,” said Luce. “Zvonkin told me that he later met Gino’s sister, and she said that he did indeed look like her brother. Abe laughed and said that Gino was an Italian, while he was of some eastern European ancestry.”

“The Executioner” Ernie Moore came along a little later than Zvonkin, and especially remembers him as an arbiter. “He used to referee some of our matches, but he was wrestling with a number of the guys back in the late ’40s, early ’50s,” said Moore.

One routine that Zvonkin used to do with Walter Grebek (Jan Gotch, Wally Greb, Mule Malone, Red Devil) stands out for Moore. “They’d get in the ring, and Abe would start to massage Jan Gotch. You know how you practice punch? They’d be in the corner practice punching. They’d do this for about 10 minutes. Then the other guys would come in and then when the bell would go, Jan Gotch would tag out, and Abe’s done all the work, all the massaging. Abe would stand there, just stunned. But it used to go over good with the crowd.”

Zvonkin suffered from bad knees from football and wrestling, and entered the Shalom Village in Hamilton in May 2001. Cancer claimed him on August 22, 2002, and he is interred at the Temple Anshe Sholom Cemetery in Hamilton.

His wife Jean said that her husband had no regrets. “It’s nice that things turned out for Abe. The things he chose to do, everything was always competitive.”