The Baillargeons were a mighty strong family 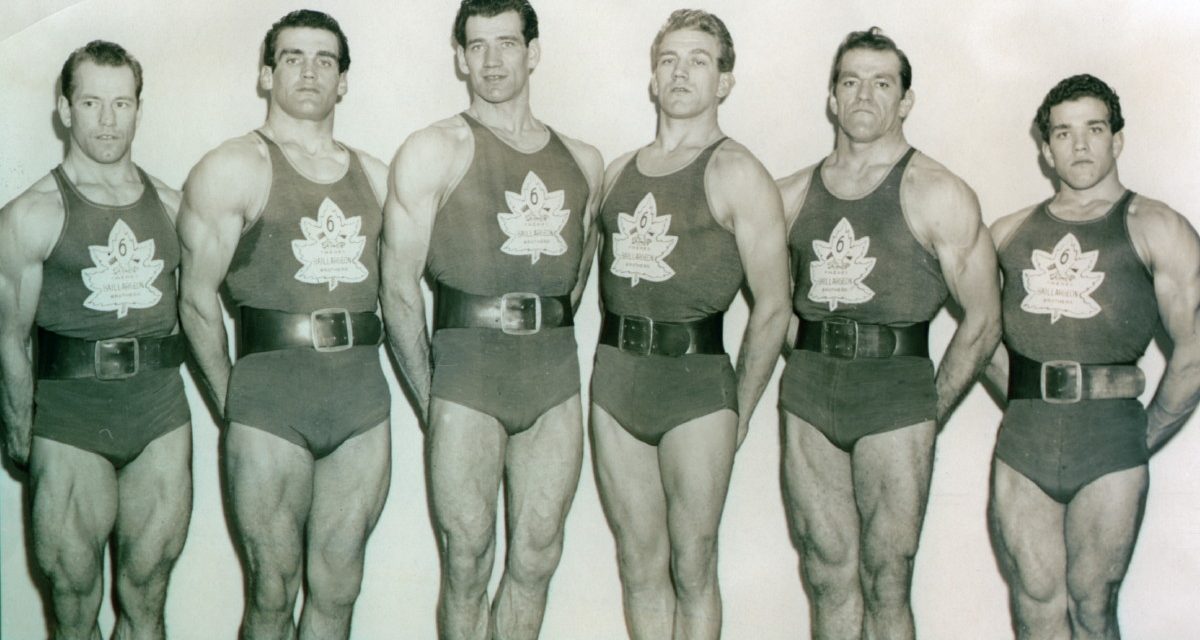 The death of Paul Baillargeon last week at the age of 77 was barely mentioned in the Canadian English media. It’s a shame that his legacy — and the legacy of his amazing family — should be forgotten. 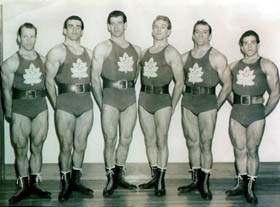 The Baillargeons all are from Saint-Magloire-de-Bellechasse, Quebec. Back in the late 1940s, they traveled the continent from town to town with their road show, doing incredible feats of strength. Like Charles pulling a bus with his teeth, or Paul lifting a horse.

The six Baillargeon brothers were, in order of age, Jean, Charles, Adrien, Lionel, Paul, and Antonio (Tony). After the passing of Paul last week at 77, Charles is the only brother still living.

During their heyday, the Baillargeons were quite the story. Newspapers would write about the family, how their mother Maria would go through 100 pounds of flour a week, or how one brother or another pulled the door off a car to save an accident victim.

The family grew up in Saint-Magloire-de-Bellechasse, and all of the boys gained their strength by working on various farms around town, and as lumberjacks in the U.S.

Jean, being the oldest, was also the first into the spotlight. According to the book Hommage aux célèbres frères Baillargeon, by Réjean Lévesque (La Plume D’Or, 1997), Jean Baillargeon challenged a wrestler to a weightlifting challenge in 1946, despite having no experience with weights. He was actually paid off to leave, and quickly realized that his strength was not common. Jean took up weights, and got his younger brothers involved too.

Surprising, according to Levesque, it was never a competition between the brothers, and they always helped each other out.

Soon, the six brothers were in costume, a weightlifting singlet showing off their impressive physiques with a maple leaf and a beaver on the front, and the text ‘6 Freres Baillargeon Brothers’ on top.

The traveling show comprised of feats of strength from the brothers, and acrobatics from the Dionne brothers.

Again, the aforementioned book about the Baillargeons has some absolutely astonishing photos of their human pyramids, with Jean or Paul at the base of the pyramid, supporting three or four people above.

But since this is an induction into a Pro Wrestling Hall of Fame, it is time to switch gears.

All six brothers had grown a little tired of the road, and having to arrange their own shows across North America. When the opportunity arose for them to train at wrestling in Massachusetts came, they took it.

The year 1949 saw all the brothers debut in the ring. Already well-known, especially in their native Quebec, their fame spread.

“Their feats of strength have been recorded by the newsreel cameras and no doubt you have seen them in your local theaters,” wrote The Ring magazine in an April 1950 edition.

The Montreal Herald wrote the following on January 26, 1950:

“The three Baillargeon brothers, members of a family of six whose grocery bills you would hesitate to under-write, made their debut in a Montreal ring, all three won, and in so doing, showed a good deal of wrestling talent, plenty of bulging muscles, and a great deal of physical strength.

Brother Jean gave fine display in beating tough Les Ryan, of Boston, using a head-hold which prompted Ryan to say “Uncle” or reasonable facsimile of same. Brother Adrien had too much power for Joe Christie, of Detroit, and pinned him with a body-press in 16:24. Mayes McLain, the former All-American, a big, rugged chap, gave the family most trouble. He wrestled Paul, who has a head of hair like Samson possessed before Delilah clipped him … they went at it hammer and tongs, Paul seeking continually for a body-scissors. When McLain got real tough, Paul gave him the old heave-ho right out of the ring and McLain landed with such a jolt that he couldn’t beat the count back to the ring.”

Mad Dog Vachon broke into the pro wrestling business a couple years after the Baillargeons, and during his career wrestled all six of the brothers.

“It’s hard to tell which one was the strongest, you know, because I saw them do some feats of strength,” said the Mad Dog, who travelled on the road from town to town with them, watching Paul lift 300 pounds with one arm, and Charles pull buses. “They were a credit to the sport of wrestling and as far as being the strongest family in the world, that’s for sure they were!”

Both Edouard Carpentier and Paul Leduc recalled a trio of matches between Paul Baillargeon and former NWA world champ Yvon Robert. In Quebec City, Baillargeon was the victor. In Montreal, where Robert was spoken of in awed tones like Rocket Richard, Baillargeon lost. A third match at the neutral site of Ottawa was a draw.

“He was one of the best strongmen I ever saw,” said former world champ Edouard Carpentier of Paul Baillargeon. “Everybody was afraid to wrestle him” because of his strength.

Vachon agreed that many wrestlers were a little intimidated by the sheer strength of the Baillargeons. “The average wrestler could say that they were dangerous because they were unorthodox, to say the least. Especially Jean, who weighed 250 pounds. He could lift 500 pounds with his small finger. How on earth anyone could do that! It’s incredible the stuff they could do.”

Paul Baillargeon was the businessman of the family, and ran a very successful hotel in Quebec City, named, of all things, Hotel Paul Baillargeon. Maritime promoter and ex-wrestler Emile Dupre took on Tony Baillargeon on a dozen occasions, and became friends with Paul too. He stayed with Paul at his new hotel, just after Baillargeon had bought it. According to Dupre, it “wasn’t much … a rinky-dink little place,” but years later stayed there again, after many renovations. “He really brought up that place like a class act,” said Dupre. Paul Baillargeon was also a long-term president of the Quebec hotel and restaurant association.

When recounting Tony Baillargeon, both Leduc and Raymond Rougeau recalled his Citröenne DS21 automobile. “Nobody wanted to drive with him,” recalled Leduc. “It was horrible to look at.”

To Rougeau, who broke into the business in the early ’70s, Tony Baillargeon was “a fun guy, always joking around, always in a good mood.”

“Antonio was the most versatile of all of them,” said Mad Dog Vachon. “He had more wrestling ability than all the rest of them.”

Fan and promoter John Lester told SLAM! Wrestling that wrestling became very popular when Adrien Baillargeon arrived on the scene in Louisiana. “Us little Cajun guys had never seen anybody that big before, or that strong, and best of all, he spoke French! Just like us! For the next several years, Adrien Baillargeon owned French-speaking Southwest Louisiana,” said Lester. Adrien eventually settled in Lafayette and lived there until his death.

Here is a little more about each of the Baillargeon brothers:

– his specialty was lifting and pulling with his teeth, including a bus
– was a lightweight
– debuted in 1949 in Loretteville, beating Charlie Guilman
– a car accident in 1955 forced him to retire
– helped his brother Paul out with the hotel business

– debuted in 1949 against Willie Dubeau in Loretteville
– was a Junior Heavyweight, and held the Canadian Jr. Heavyweight title
– wrestled for nine years, and retired in 1958

– his specialty was lifting horses and weights with one hand
– debuted in 1949 in Saint-Damien against Paul Lortie
– was fast and agile in the ring
– was Canadian Junior Heavyweight champion in 1951, and Canadian champion in 1956
– was a West Coast NWA tag champion with his brother Adrien in 1957
– wrestled for 11 years, and retired in 1960
– was the biggest success of the brothers as far as being a top-notch star across the continent
– owned the Hotel Baillargeon in Quebec City, and was the president of the Quebec hotel association

– debuted in 1949 in Saint-Damien against Charlie Guilman at 20
– wrestled in all the provinces, and 45 U.S. states
– was a lightheavyweight
– won tag titles with Pat O’Connor, his brother Adrien, and Jos Leduc
– wrestled for than 3,000 matches, and retired in 1976

Thanks to Hommage aux célèbres frères Baillargeon, by Réjean Lévesque (La Plume D’Or, 1997), The WAWLI Papers, and Gary Will for some of the background in this article.