You’ll find wrestling’s garbageman, Duke ‘The Dumpster’ Droese, on the side streets these days, instead of picking up the trash in the WWF or WCW.

He’s working independent shows, and enjoying it. Droese was in Hamilton, Ontario recently, wrestling for ICW and took a few moments to talk to SLAM! Wrestling. 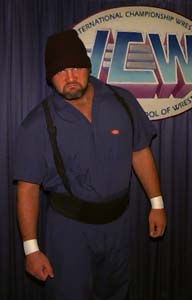 Duke ‘The Dumpster’ Droese poses at a recent ICW show in Hamilton. — Photo by Greg Oliver

But does he dream of making it back to the bigs, back to the heights he reached in 1996, working WWF pay-per-views?

“What are the big two? ICW and what?” he retorted in his standard, dry sense of humour, before continuing. “You never know in this business … I never burn bridges.”

Droese started wrestling at 18 in 1987 “just out of high school” in Miami, and was trained by Bobby Wales, the Jamaican Jammer. He had always been a wrestling fan.

“Down in Miami they had Championship Wrestling From Florida with Dusty Rhodes, Kevin Sullivan. Every week, I’d go out and watch the shows.”

The 6’5″, 306-pound Mike Droese wrestled around Florida while attending the University of Miami, and obtaining a degree in criminology and philosophy.

Obviously not lacking in confidence, Droese explained how he made it to the WWF.

“I walked up to Vince McMahon and told him to give me a job. And he did!” he recalled.

His first match in the WWF was against “some poor slob named Mike Bell.” After the match, Droese threw his opponent into a dumpster — the only time he actually used a real dumpster during his career.

“It was pretty funny, but too violent they said,” Droese explained, dwelling in the irony of what pro wrestling — at least in the WWF — has become, where dumpsters are tame compared to some of what goes on.

Droese gives all the credit to one man for wrestling’s current popularity.

“It’s the Stone Cold Steve Austin era. He took it to new heights.”

Looking back on his twelve-year career (“wow, I feel so old!”), Droese believes that beating Jerry ‘The King’ Lawler in Memphis was his career highlight, and that his feud with Hunter Hearst-Helmsley — which progressed over two pay-per-views in 1996, and included HHH cutting The Dumpster’s hair — still isn’t over.

He genuinely seems to enjoy his trashman gimmick, even if it means searching backstage at each indie stop for props to use on the way to the ring.

“I’ve always been a garbageman in the wrestling ring. I’ve always taken out the trash. Call me what you want to call me, but the label doesn’t matter.”

For Droese, it’s all about “beatin’ people up and takin’ out the trash.”