The centre of an ECW Storm

Lance Storm is undoubtedly one of the new breed of promising young wrestlers who can wrestle, hit the high spots and brawl with the best of them.

“I think everyone who starts out, when they really come into their own it’s as a heel, because you have so much more freedom. It’s so much easier to get yourself a personality and a character in a heel direction because it’s easier to get people to hate you than to love you,” states Canadian bad boy, burgeoning heel and rising Extreme Championship Wrestling superstar Storm in an exclusive interview with SLAM! Wrestling. 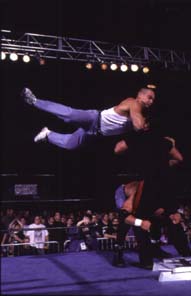 “I much prefer the heel end of it, not just because you get more freedom but because I’m still more of a traditionalist when it comes to wrestling. Traditionally the heel is the guy who runs things, in terms of the match, so I think being a heel is where I’m best suited.”

While Storm is enjoying his newfound status as a heel, he hasn’t forgotten the lessons learned from being a prospect for the Triple Threat.

“While I was never actually deemed Triple Threat material, I was pretty happy with that whole period in my life. I enjoyed working with Shane Douglas, he has a lot of talent and is someone you can learn a great deal from.”

But he doesn’t think he’s a complete package yet.

“I think as far as development goes I have a ways to travel before I can be where I want to be, not just in a character sense but in being a ring-general, running the match, running the interview or anything else. There are some guys who have booking minds and some that don’t Paul (Heyman, ECW owner), has given me some control over that aspect and I think I can have a big impact creatively as well as wrestling wise. I want to be the guy who can have an intense match but still dictate a lot of pace and direction and such, I think another lengthy stay in ECW will develop that for me. I think that’s where Shane’s strengths lie, in that when he is on you can tell he is running the match. That for me is more important than adding a triple jump moonsault to my repertoire.” 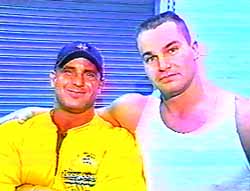 Speaking of the Triple Threat, it was with former Triple Threat member Chris Candido that Storm captured the ECW tag belts and subsequently began his head-first plunge into the world of being a heel, following his turn on Candido after losing the belts to Rob Van Dam and Sabu. The question that begs to be asked with Candido’s return is what the future holds for these two former partners?

“I doubt my feud with Candido will ever be finished, whether he likes it or I like it, we just happen to be extremely good in the ring together, both as a team and as opponents. I’ve heard rumors that Chris and I may tag up again one day. With the Dudleys running their mouths saying ‘they beat everyone in the ECW’, they never beat us, we wrestled them once and we beat them. It was a house show in the Boston area and I tend to think this is a match which should’ve taken place on television so there will probably be pressure to put Chris and I together again to do it.”

It’s a similar story on the Storm-Candido tag team.

“I don’t think we really had a chance to shine as a tag team like we could have, because there was so much dissension and all the other things that were thrown into us being the tag champions, I don’t think we were allowed to excel. I think we could have been far more than what we were, but on the other hand I’m enjoying being a singles wrestler and think that’s where my future predominantly lies.”

While Storm’s future may well lie in singles competition he will not be alone. After his break with Candido and the Triple Threat, the lovely Tammy Lynn Bytch was inserted into the equation. She is undoubtedly one of the more ‘over’ valet/personalities in the ECW right now and will continue to be at Storm’s side for the foreseeable future.

“Tammy Lynn Bytch was realistically going to only be a one time deal. It was a vehicle to get Tammy Lynn Sytch (Sunny of WWF fame), over with her first big (role) in with ECW. They wanted to give her a foil and she (Bytch) did really well, she seemed to have a real good presence with cameras and everything else. So I went to Paul and said I would enjoy having her around on a permanent basis, I think we could do good things. He was happy with the way she worked and it has turned into a permanent deal.”

ECW’s latest national and somewhat international foray into the Pay Per View world was ‘Guilty as Charged’, a PPV that put ECW back in the good books of many fans and critics alike after the fairly average ‘November to Remember 98’. Lance Storm took on Rob Van Dam for the Television Championship in an excellent match, which featured high spots, technical wrestling and the always-lovable Bill Alphonso.

“I thought the show was pretty solid, there wasn’t a match out there that I didn’t want to see when I watched the tape afterwards. Unfortunately I thought the crowd was poorly mic-ed. Live, I thought the crowd reaction was really strong but you missed it on television. My match I was happy with, more live than on tape, I thought Rob and I had a better wrestling match but I think with (Tommy) Dreamer and (Justin) Credible having the ladder and some good innovation, that they had the best match on the card. Shane and Taz did quite well considering the limitations of Shane’s broken wrist and his still healing arm.”

It seems these days you can’t mention Shane Douglas without speculation of him either jumping ship or retiring running rampant, but contrary to what the ‘Net says, Storm doesn’t see either option happening anytime soon.

“Shane’s a real talented guy and I don’t think he’s going anywhere. People just want to attack him, probably because he put Ric Flair down for so long, but that was his character. I think he’s appreciating more and more what Flair has done now that he is getting a little older and is battling through numerous injuries. I think the rumours are a little premature though, there was definitely a little dissension at the PPV about how things were being done, but he was at the show the next week and wrestled Taz. I talked to him recently and he’s not planning on going anywhere. I tried to convince him to take the next six weeks off just to heal and come back with a clear head so we’ll see what happens.”

While Douglas’ future may continue to be with the ECW, the last several months there have seen numerous defections that has everyone predicting the imminent demise of ECW. Yet after acquiring Sid, putting on a highly successful PPV, and with the return of the Public Enemy, ECW looks as strong as ever.

“I think the whole defection aspect has been over-exaggerated. I think a lot of Internet people are trying to create a story which isn’t there. Bam Bam (Bigelow) jumped and I think it was because he was frustrated and was being underutilized. I believe he was the biggest name in our company and the most talented in the company and wasn’t treated as such. He just had another kid and he has a wife and a family to support. The only other significant loss was the Sandman. I don’t think he was especially talented but he was over, his name was so connected with ECW and he was so over, that it hurt. That perception that the ‘ECW Icon’ left, but I honestly think they ran out of things to do with him. He had a real over entrance and had to be kept in tag situations to hide the fact that he really didn’t wrestle anymore. But Paul has always been good at hiding weaknesses and exploiting strengths.”

“Who else have we lost? Mikey Whipwreck, a good guy and a good worker but not really figured in the future in any way, shape or form and that’s probably why he left. Losing Chastity? Not a major player at all. So other then the Sandman and Bigelow we really haven’t lost anyone.”

Still there are the lingering rumors of offers to almost everyone in the ECW by the big two. And what about the story that Tommy Dreamer was thinking of leaving?

As a veteran of ECW, Storm has been involved in numerous matches where he’s dove onto wrestlers in the crowd, been hit with chairs and driven through tables. Yet the scariest bump he’s taken is the same one that nearly blinded Rob Van Dam and still ranks as one of the most extreme.

“The first time I ever had Rob Van Dam and Sabu jump off the top rope, putting me through the table, it scared the hell-out of me because you really don’t know what’s going to happen. They’ve hurt themselves doing it. Rob almost lost an eye when a splinter went into his face and almost completely tore off his eyelid. The only thing that saved him was that it went into the bone instead of the eye. I think that was against Bam Bam at the ECW Arena. It’s something you build-up to (being tabled by Sabu and RVD). I think that’s how New Jack has gotten to the point where he’s diving off thirty foot balconies by adding a foot every other month and sooner or later he’s going to kill himself.”

New Jack’s eventual demise notwithstanding, Lance Storm is a Canadian wrestler who was trained by the Harts and is proud of his Calgary heritage. Considering his cultural and wrestling connections he must have an opinion on the Bret Hart documentary “Wresting with Shadows”, especially since he has used it as an excuse for not wrestling on an episode of ECW TV.

“The whole thing in Buffalo was that Jerry Lynn was injured and couldn’t wrestle, so what do we do? We cut a promo to hype the match, basically I came out with the ‘Wrestling with Shadows’ documentary and said since we were so close to Canada and since I’m Canadian that I wouldn’t let Heyman screw me like Vince screwed Bret and then I left.”

“I enjoyed the documentary, I still can’t believe so many people think that it’s legit. I remember watching it at the time (Survivor Series 97′) with a few of my friends hoping Bret would just shoot on Shawn and just kill him, but when I saw the outcome of the match I thought it was a booked finish. I think Bret and Vince have managed to swerve everyone in and out of the business. It’s a hell of a finish to a great story, he’s been screwed and I think he’ll come back to redeem himself and it accomplished what both parties wanted. Bret didn’t want to lose to Shawn, Vince wanted the belt off of Bret and nobody thinks Bret lost. It’ll be interesting to see if he does come back or it he just retires with the ton of money he got from uncle Eric.”