He was, quite simply, the greatest wrestling photographer the world had ever known. And now, with Tony Lanza’s passing at age 84 in Montreal, it is a time to celebrate his life — a life of bodybuilding, wrestling, promoting, training, sculpting, hypnosis, and publishing.

Lanza had a very distinctive style with his photos, and had the ability to bring out the best in his subjects, whether it was a bodybuilder like Steve Reeves, a film star like Mae West or a wrestler like Lou Thesz. 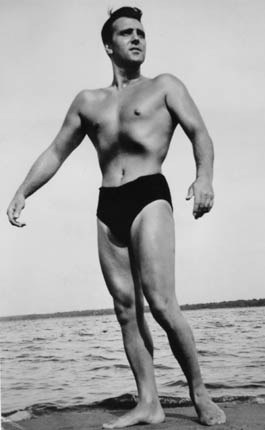 Tony Lanza in a self-posed shot.

In the studio in his basement of his house on Bordeaux St. in Montreal, Lanza did his best work. He hollowed out part of the floor so that he could shoot down onto his subjects. Many of the classic posed photos used as promotional photos by greats like Thesz, Whipper Billy Watson and Killer Kowalski, were done by Lanza. He’d stamp the bottom right corner with “Photo Lanza”, but equally distinctive was the podium that he placed his subjects on.

“I used to take them in the studio, I used to photograph them myself. I used to take them the way I wanted to take pictures. But it was just my house. It was not a big studio. It was just a big room that I had,” Lanza said. “Wrestlers, they didn’t have much to photograph. It was just a plain wrestling pose. But the bodybuilders had to pose to show their muscles. That was a different thing. They had the symmetry there. They had to be balanced. So it was a different kind of photography, it was not the same kind.”

“Tony has been recognized as one of the best photographic interpreters of the human form for decades, and his pictures of icons such as Steve Reeves have helped create a positive image of [bodybuilding] in the eyes of the general public,” wrote Flex magazine in 2002.

Lanza was the photographer and editor for numerous wrestling books and magazines over the years, both in French and English. His best known work is 1965’s The Golden Book of the Century. He considered wrestling-magazine czar Stanley Weston one of his closest friends.

Every Wednesday night, Lanza would shoot at ringside at the Montreal Forum. “But I was a better photographer of bodybuilders outdoors. I knew the hours and time the time when to photograph a bodybuilder outdoors. That was a hobby for me. My real life was as a wrestler.”

Ferdinairdo Antonio Lanza was born July 7, 1920 in Montreal, but was Italian through and through. His father had gone to Canada from Italy before the First World War. When the war started, he returned to Italy and joined the Italian army. His wife was about four months pregnant with Tony when she left Italy on a ship bound for Canada.

As a teen, Lanza was into boxing, and then amateur wrestling. In 1936, he became the training partner for future superstar Yvon Robert, both in Montreal, and at the storied Camp Maupas, run by Emile Maupas, where trainees would cross-country ski in a bathing suit in the winter.

Even then, Lanza said he knew Robert would be a legend. “[Robert] was good standing up, the Greco-Roman style. He was good at it,” Lanza said. “They all wanted to be Yvon Robert at that time. He was a big star. I don’t think we ever had a wrestler that was as famous as he was.”

The Second World War interrupted Lanza’s plans for a sporting life, but he scored a position working the docks in Quebec. “I was in charge of the waterfront in the time of War. They used to ship shipments to England, and I was the MP in charge of the regimental police,” he explained.

It was during the War that he fell into bodybuilding big time — and photography.

He was looking for a set of dumbbells, and paid $7 for a used set from Joe Weider. A friendship was struck, and throughout the rest of their lives, Lanza was great pals — and a regular photographer for — Ben and Joe Weider, with their bodybuilding empire.

Lanza bought his first camera at a pawn shop, talking the owner down to $8 rather than the $35 price. “That camera did 500 covers of magazines,” Lanza laughed. The Weiders had a photographer in town from New York, but they invited Lanza on a shoot in Laval anyway. “So the next thing I know, I start taking pictures. I didn’t want to take pictures. The photographer, he was here, especially for the case. So finally he says, ‘Take pictures.’ So I took pictures. … next thing I know, my picture came out better than the photographer! And that’s the way I got involved as a photographer for Joe Weider. Ben Weider came after.”

In the wrestling ring, Lanza was known under a number of different guises, after his debut for Montreal promoter Syvui Samson. “I used to wrestle here with a mask because I was known as a photographer and I had to hide my face,” he said. “It didn’t bother me because I had to hide my face. At that time I was known as a photographer. A lot of people didn’t know who I was, you see. But then I became a champion here. I became Northeast champion at the time, I became a junior heavyweight when I first started.”

Some of his aliases:

He topped out at 6-foot, 255-pounds, and did a fair amount of traveling during his days in the ring. He went to St. Louis to work for Sam Muchnick, to Toronto for Frank Tunney, and competed for Jules Strongbow in California. “I used to travel 3000 miles a week, and I did that for many, many years. I said to hell with it, I want to stop traveling. I burned out three cars!” He listed his toughest opponents as being Thesz, Bobby Managoff, Kowalski, Edouard Carpentier, Dick Hutton, Robert and Yukon Eric.

As a trainer for 15, Lanza discovered and trained talent like Ovila Asselin, Sammy Berg and Billy Hill. He promoting small shows around Quebec, and helped in the early days of future stars of Dominic Denucci (“I was the one who gave the name Denucci. That’s not his name”) and Don Leo Jonathan.

Upon his retirement, he immediately leaped into a new profession (while still working as a photographer, of course). He studied to get his Doctorate in Metaphysics and became part-time hypno-technician. “I used to hypnotize wrestlers sometimes. I hypnotized one wrestler, Kenny Ackles, one day. The next thing I know I’m in Ottawa. He doesn’t know. I got in to the ring. Once I got into the ring, I pin him, the match was over. He goes back to the dressing room. I put him under all those suggestions. And he’s still waiting for his match! ‘Your match is over!’ I used to do that sometimes.”

In 1982, he had a serious health scare. I got operated in 1982 for a tumor in my head, caused by these broken chairs … I never thought I was going to survive.”

Away from the ring, and when he found the time, Lanza rode horses, hunted and fished. Sculpting was another Lanza’s passions.

Lanza died from a fall in his bathroom on Thursday, January 20. Lanza’s wife, Margot Gravel, died in 1997. They had two children, Tony Lanza Jr. and Claudette.

Greg Oliver is the Producer of SLAM! Wrestling. He has been fortunate to have gotten to know Tony Lanza over the last few years, including a very special lunch this past February. He can be emailed at [email protected].