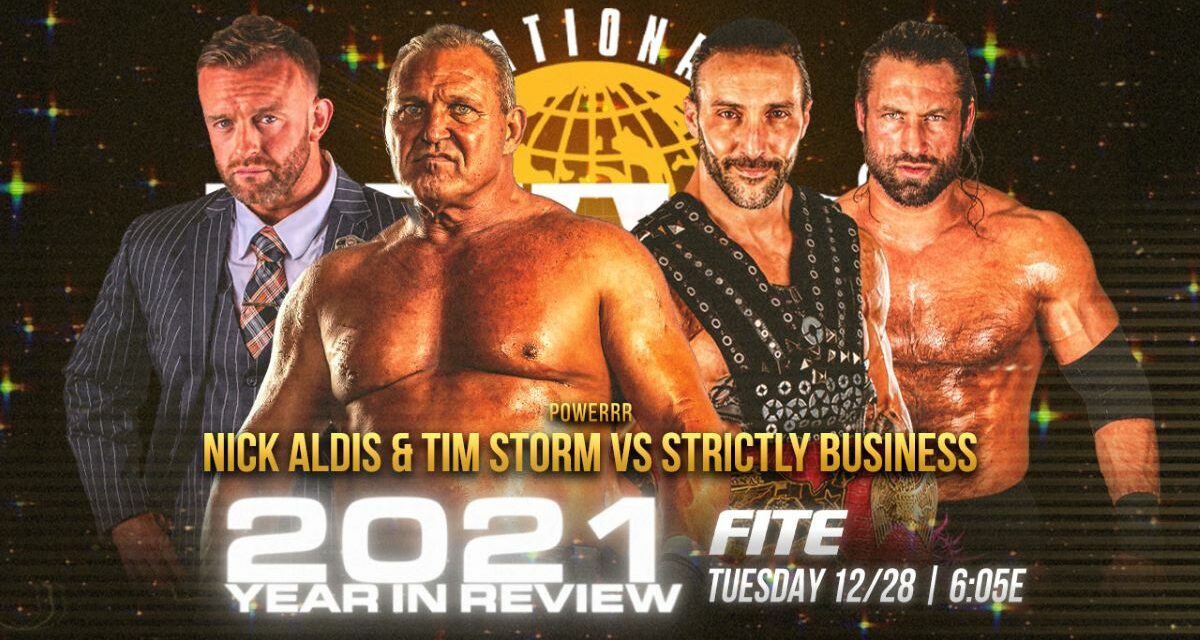 Amazing what a difference a year makes in the National Wrestling Alliance.  The company went from no activity due to COVID to producing some highlight-worthy moments, it’s a good time as any to step Into The Fire as the year closes and it’s a good time to reflect on some of those big moments that defined and redefined the modern day NWA.

Joe Galli joins us (fresh as a daisy from his holiday party last week) to go over some of those benchmark moments that occurred in the year.

I’m not fond of recapping a recap show, but I do think as they head into the new year (for those of you coming to the party late) we should get a chance to catch up if you don’t subscribe to the FITE App.  So here’s how this is going to go moving forward:  when they reference a match, I’ll just give a quick synopsis of what happened (with links to the episode, if available) and then I’ll just add my thoughts afterwards on the importance of that moment.

So let’s jump to the first part of the year, which told a great story involving the Ten Pounds of Gold.

Tonight it's a special extended year in review episode of #NWAPowerrr! Witness the battle royal that began the journey for @TheRealTMurdoch to become the first new Worlds Champion in years!

The Match: As then-champion Nick Aldis held the belt, as Trevor Murdoch did his best to get that victory, but Aldis and Strictly Business kept him away as much as possible.  But all that changed during the battle royale that showed There Can Be Only One…Contender, where Murdoch got the all important win to be the number one contender.  This added fuel to the heated rivalry, which reached its apex at NWA 73 with was The Chase for Title Dreams, that saw Murdoch get the pin to be the new NWA Heavyweight Championship.

My Thoughts:  Remember when a heavyweight title has so much importance and prestige?  Not only does Pepperidge Farms remembers, but so do I.  Aldis and Murdoch were the perfect rivalry to add sizzle to the title picture, and afterwards they showed respect to one another.  Not even creative could write a better angle (and I’ve seen WWE’s title picture of late, and I stand by that remark).

What this means in 2022 for Murdoch remains to be seen, as Mike Knox and Matt Cardona are looking to insert themselves in the title picture, but it looks to be a good one as Murdoch defends the Ten Pounds of Gold. 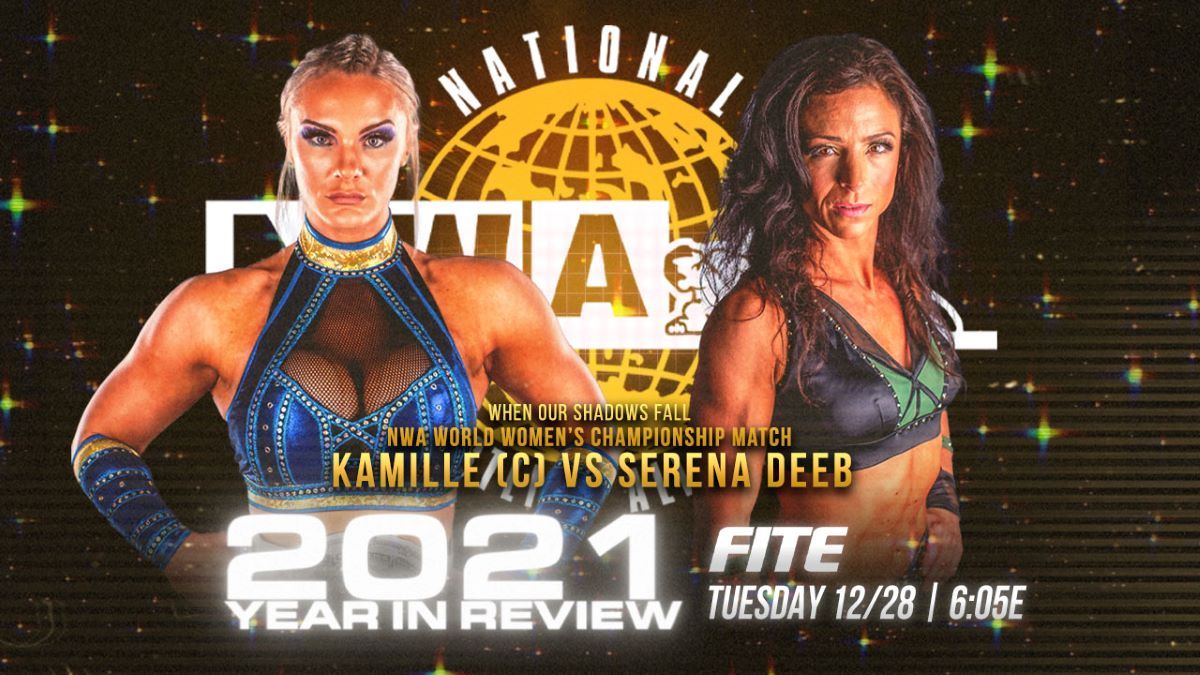 The Match: Galli also notes that the women of the NWA have added a lot to the title picture, with the groundbreaking EmPOWERRR PPV, but the current holder of “The Burke”:  The Brickhouse herself, Kamille.  Kamille has been a force since she faced then-champion Serena Deeb at the When Our Shadows Fall PPV for the championship.  It was a physical matchup, as The Woman of a Thousand Holds did everything to stop Kamille.  Despite her best efforts, Deeb was cut in two with a spear by Kamille to be the standard bearer for The Burke.

My Thoughts:  Kamille has proven at every step she is the measuring stick for the female facing the Brickhouse in the NWA.  Some have come close to taking The Burke from Kamille, like Thunder Rosa, “Legit” Leyla Hirsch, and Melina, but none of them have figured out how to counter Kamille’s power game.  Melina might get a little closer in 2022, but that is a subject for another day.

We also get some clips of JTG vs Chris Adonis for the NWA National Championship from June 6th, where Tha God came close to taking Adonis’ belt, but JTG gets cinched in the Masterlock, and Fred Rosser comes out to throw in the towel for JTG.  When it comes to the secondary titles like the National belt, I wish more emphasis gets placed on challengers for Adonis in 2022. 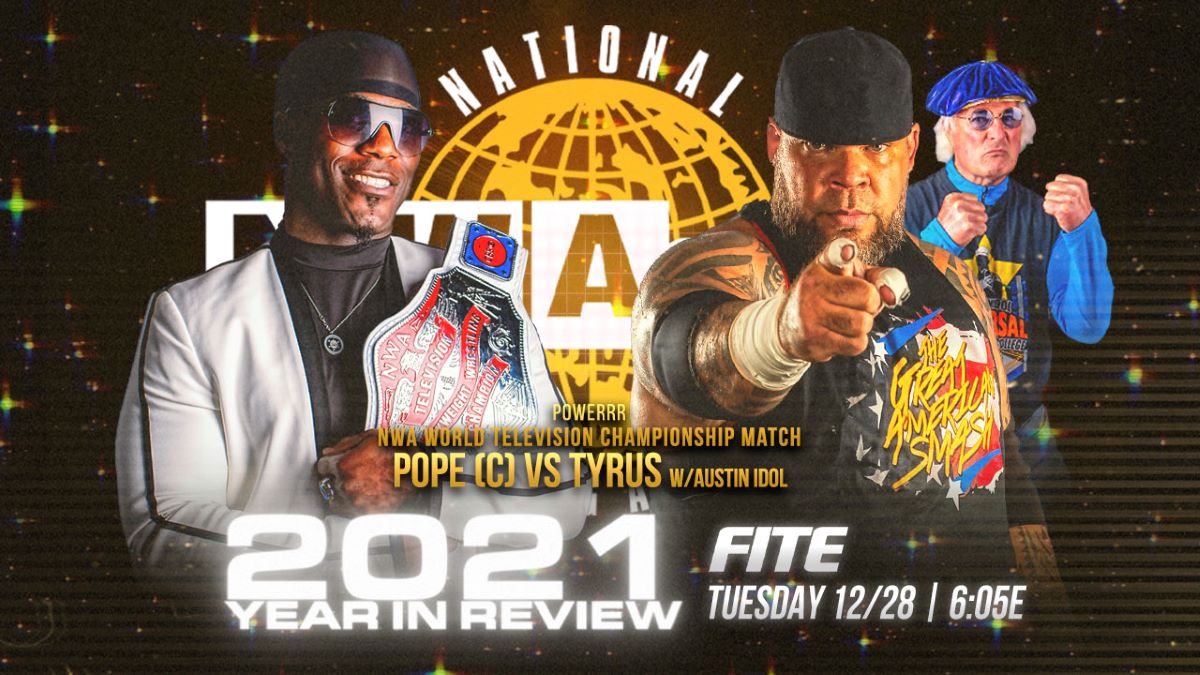 The Match:  This leads to the NWA Television Title, where early in the year, Da Pope had successfully defended the belt six times, and was on his way to a seventh title defense to earn a shot at the Ten Pounds of Gold.  However, Tyrus kept hounding Pope at every turn, alongside his new manager Austin Idol.  On August 7th, Pope almost had the chance to win, but due to shenanigans by Idol, Tyrus managed to defeat Pope with his heart punch and become the new Television champion.  Tyrus has been able to defend the belt, and with help from Jordan Clearwater and BLK Jeez of Idol-Mania, there’s no stopping his momentum…except for Cyon, which we’ll cover in a sec.

My Thoughts:  While I would love to one day see the Television belt get defended seven times for a heavyweight title shot, but the chase is just as fun.  Whatever anyone’s thoughts are on Tyrus, he has proven to be everything a heel champ needs to be:  cocky, conniving, and an absolute “Man-ster”, to borrow the phrase from Idol.  But it doesn’t look like he’ll still be holding the belt for much longer in 2022, if a masked challenger has his way.

We also get Sal Rinauro vs Colby Corino during the Champion Series, that saw Corino use underhanded tactics (and brass knuckles he pulled from his tights) to knock out Your Pal Sal and get the important win for team Pope/Velvet Sky for the team to earn future title shots.  Again, Corino just fosters the innate douchenozzlery to get fans to hate him.  Must run in the family.

This brings us to the fallout from Nick Aldis losing the Ten Pounds Gold, and Chris Adonis and Thom Latimer weren’t following in lockstep with The National Treasure, leading people to wonder What’s Causing Aldis drama with Strictly Business?  That led to a tag match that had Tim Storm and Nick Aldis face his Strictly Business teammates.  While Aldis got the win, Latimer and Adonis turned on their leader and broke away from Aldis in the most painful way possible, with two piledrivers that had The National Treasure get stretchered out.

My Thoughts:  Aldis is far from done with his former stablemates, specifically Latimer, and something has to give.  As we head into 2022, Latimer is starting to come into his own, and he will be a part of the upper card, if not challenging for the title outright.  Aldis can either keep fighting his former friend, or set his sights on breaking Adonis and take the National title, just to freshen up the secondary title picture. 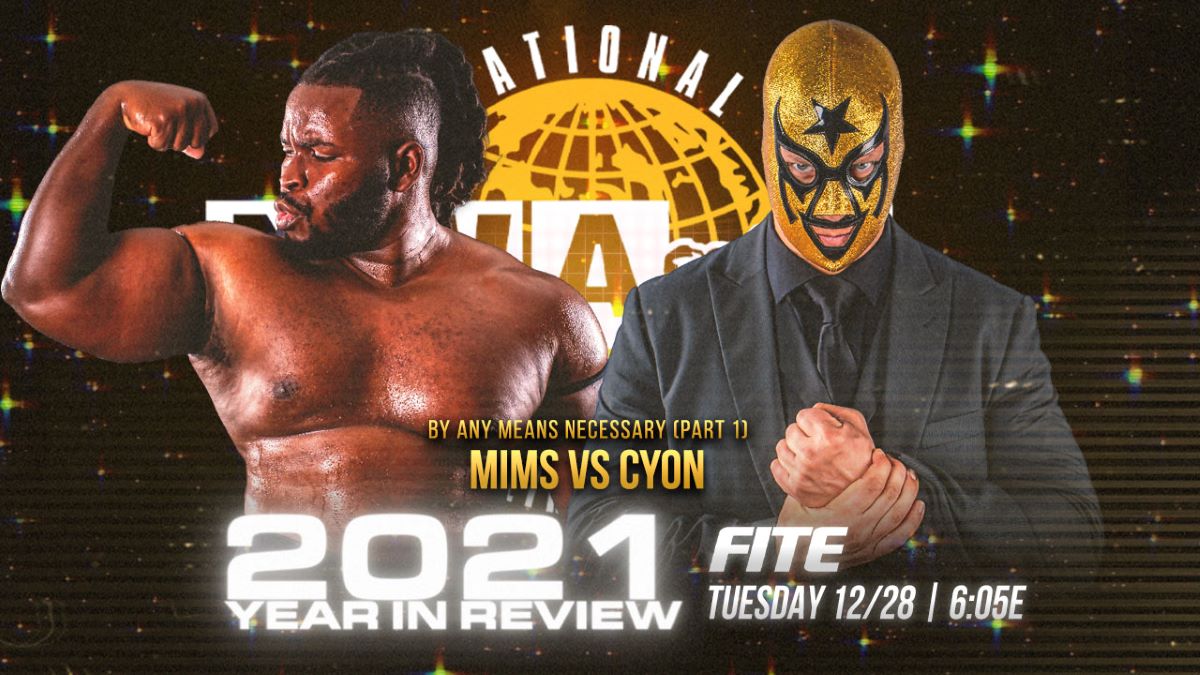 Since coming to the NWA, little has been known of the masked man named Cyon.  While it was easy (mostly by me) to deride the masked wrestler as the Son of The Question Mark ™, Cyon has got an impressive move set.  This was evident when he faced Big Strong Mims in a very physical matchup that had Cyon beat down Mims By Any Means Necessary to stop the powerhouse Mims, as a warmup for his Television title match with Tyrus.

My Thoughts:  The NWA is really investing heavily in Cyon, and they have kept his identity a secret throughout his tenure.  You know how hard that is in the Age of Social Media Snitching?  In any case, he is a future blue chipper, and Mims is no slouch either.  In 2022, both these men will feature heavily in the mid-to-upper card matches sooner than later.  Cyon is close to that, as he is ready to challenge Tyrus again for the Television belt after coming up short at the Hard Times 2 PPV.

Galli thanks us and says to pay attention to the various social media platforms for future updates.

Overall Thoughts:  The NWA has definitely moved their fortunes forward since the start of the year, and 2022 looks to be a big one with the addition of the NWA USA YouTube show focusing on the NWA Junior Heavyweight belt division, along with the overall title pictures.  I was hoping for more focus on the tag division in the review, but we’ll have more opportunities in the new year.