NWA POWERRR: Cyon is ready to beat down Mims By Any Means Necessary 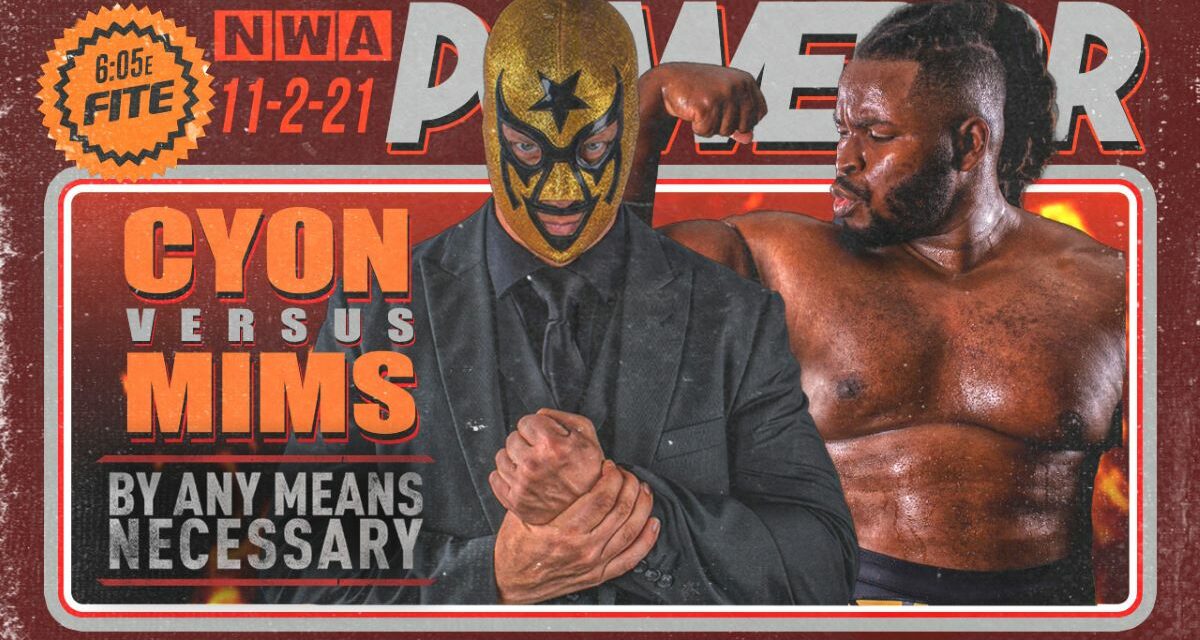 The wrestlers of the National Wrestling Alliance are stepping up the violence, and are willing to do everything to secure the win By Any Means Necessary for this supercard.  No need to step Into the Fire, as the action is already amped up in the Valor Hall in Oak Grove, KY, in association with Tried-N-True Wrestling.

We go to a cold open as Kyle Davis with Jax Dane. After Dane tells Davis for the last time to mention his accolades in the NWA, he mentions that the cage match is up his alley, as it allows him a reason to bring out a side of malevolence the fans have never seen.  As for Crimson, he will put his fist through his face, and the violence will be unparalleled, and he cannot let people cross him.  He can’t put into words what he plans to do when he gets in hands on Crimson.

As we go to the ring, the music hits (!) and Da Pope comes out to be greeted by Joe Galli.   Pope takes over as Galli joins his fellow broadcast colleagues, Velvet Sky and Austin Idol, Pope has breaking news for the fans in Kentucky:  Pope is pimpin’, Daddy.  Then Colby Corino comes out with The Fixers, Jay Bradley and “Wrecking Ball” Legurtsky. Corino asks smug with his newfound muscle, and Pope says that he’s gonna give him a whipping that his dad, Steve Corino, shoulda gave him.  So what that, we get your First Match… 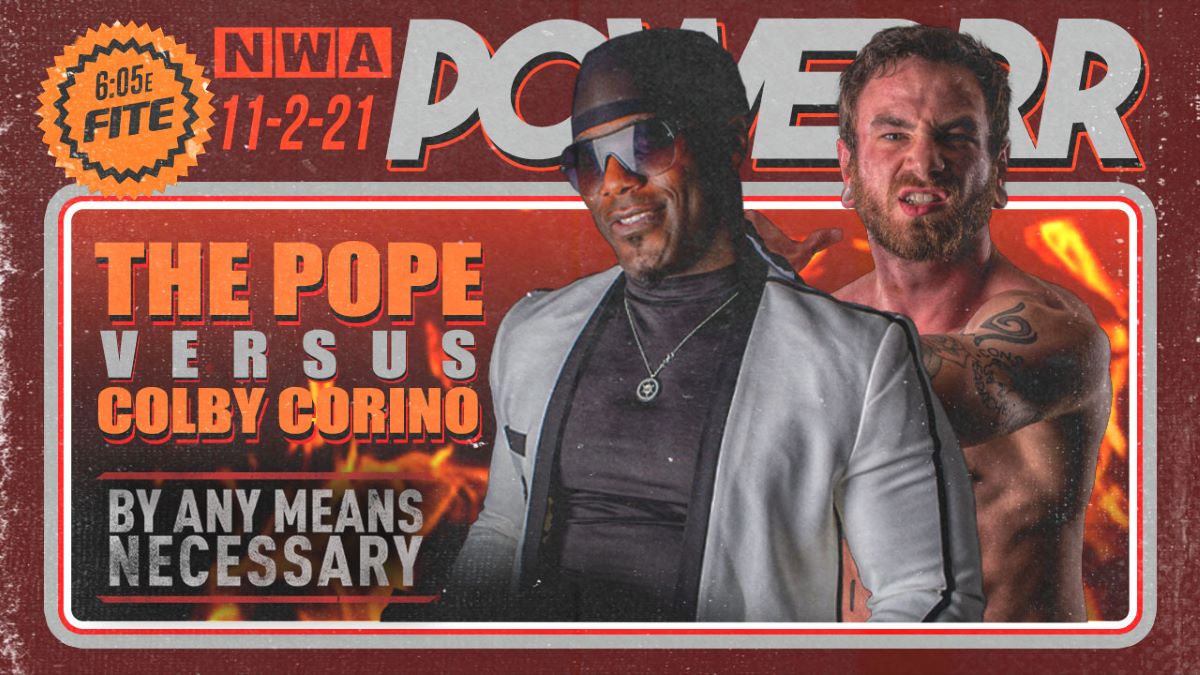 Colby Corino (with The Fixers) vs. Da Pope

Start of the match has Corino able to outwrestle Pope, but can’t quite pin Pope.  But a hip toss and a quick jab knocks Corino loopy.  Pope channels The American Dream, if you will, and jabs away with quick jabs and goes for a bionic elbow, but Corino eye pokes Pope, followed by Stun gun to the top turnbuckle.  There’s more going on in the match but Sky and Idol’s (oh, let be generous and loosely call it) banter is very distracting that it makes it hard to get into the match.  Needless to say, every offense that Corino is able to do, Pope can do better.

Pope has Corino in the corner, and lowers the kneepads for the Elijah Express, and the Fixers make their presence known as Legurtsky distracts the ref, and Bradley stuns Pope on the top rope.  Corino’s now getting his money worth and hits the Corino Crush (standing somersault senton) to cover for two.  Captain YUMA and Rush Freeman come out to even the odds for Pope.  Corino tries an abdominal stretch, but Pope turns it into a pinning combo and rolls up for the three count.

Your Winner via Pinfall:  Da Pope.

Pope celebrates with the people, and he’s still pimpin’.

We come back from the break, and Ill-Begotten try to fight the Fixers.  We find out that this is a sanctioned match, so…

There is no other way to put this other than this is a squash match, with a side of squished.  Before I could find a squash recipe, The Fixers had some double team fun with YUMA with a vertical suplex base with punches to YUMA’s torso, to a slam to the mat. A double team brainbuster is enough to put away YUMA and declare that…

Bradley gets on the stick and gives The Fixers mission statement:  There’s not a problem they can solve or fix, and they are for hire.  So this is the NWA’s answer to the Acolyte Protection Agency?  Eh, I’ll play along.

But the music his, and as we look to the entryway, and faster that you can say “Ring of Honor”…Matt Taven and Mike Bennett appear to the amazement and delight of fans.  We find out this match is now sanctioned so it’s time for…

This match is a little more competitive, and at one point we get suicide dives to Legurtsky and Bradley by Taven.  Fans chant loudly for “OGK” and even though The Fixers over matched Bennett and Taven pound for pound, The OGK send Bradley over the ropes, and then Legurtsky is worked over with a spear/frog splash combo by Bennett and Taven, respectively to put him down for the three count.

Your Winners via Pinfall:  The OGK

So let’s go to the bloodletting…err, next match… 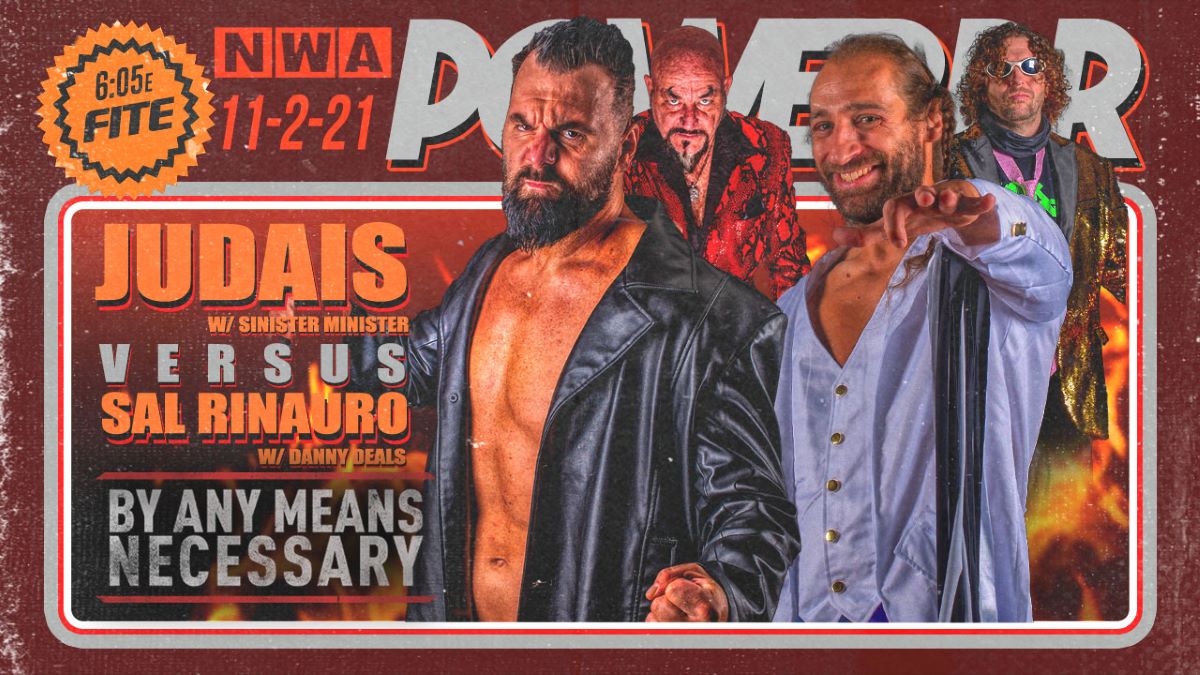 Danny Deals leads Rinauro to the ring with a homemade crucifix and garlic.  Don’t think that’ll work, but hey!  Give the man points for trying.  At this point, Judais is the NWA’s answer to Michael Myers from the “Halloween” franchise, in that you can throw anything at him, and he’ll just keep coming back for more destruction.

Speaking of, Rinauro is just getting a bell-to-bell bludgeoning, all courtesy of the High Priest of Punishment.  Your Pal Sal attempts some hope spots, using his speed to hit an Ace crusher, a superkick, and a crossbody to cover for a two count.  Rinauro leaps and is planted with a choke slam, and El Crucifixia (crucifix toss slam) finally ends it for Your Pal Sal.

Your Winner via Pinfall:  Sal Rinauro

Judais is ready to continue to deliver more violence, but the Minister says to back off for now, and he leads his protégé away. Afterwards, Rinauro seems disappointed in the loss. Hard to tell with the audio, but it sounded like he is talking to himself, saying “this is on you.”

For now, let’s turn to the tag team division for the… 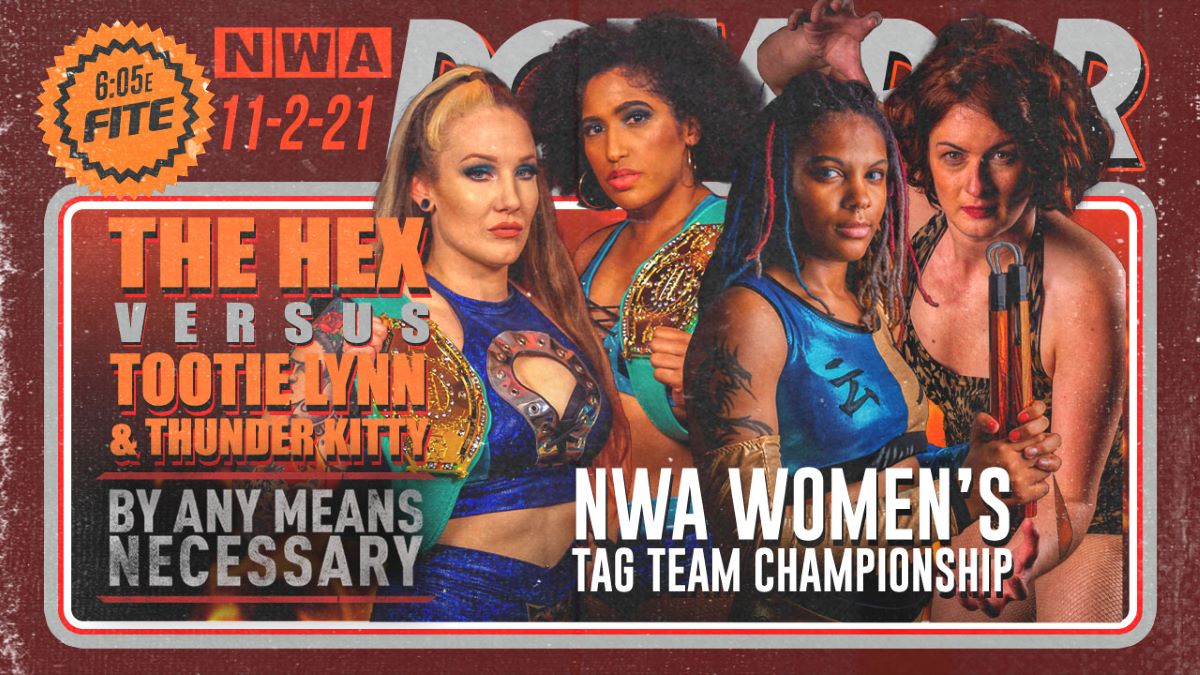 As the women were making their way to the ring, Galli and Velvet Sky noted that Kylie Rae had decided to take time away from the ring to focus on herself, and Sky chimed that they are behind her 100%

Onto the match, as Kay and Kitty start, but a quick tag to Lynn and the Little Blue Dragon some offense to Kay with a huracanrana, but Kay is too powerful and answers back with a sidewalk slam. The Hex are the more cohesive tag team and even though Lynn and Kitty put up a fight, The Hex drive Thunderkitty to the mat with the Hexclamation Point.

Kyle Davis talks to The Hex after the match, and asks what’s next? Belle says that they’ll fight whoever they want, whenever they want. When Davis asks the meaning of “The Hex”, Belle spits something out in Spanish, but Kay is there with a translation that means they will ruin your damn life.  Message received, ladies.

We get a reply of the feud between Cyon and Tyrus for the NWA Television Title, which will culminate at Hard Times 2 on December 4th.  I will say this:  The NWA have done a good job keeping this guy a secret.  Even I don’t know who he is.  Then again, I haven’t looked as hard, either, so take that what you will.

But Cyon is focused, and what better way to get some aggression out than in your Main Event…

There’s a new singlet for Mims, that emphasizes his moniker, and as Cyon enters, he is staring daggers at Austin Idol at commentary, and Sky says to go ahead and take him down.  Can’t say I blame her.  Match is just a strength versus strength, and neither man is giving any quarter.  They go to a test of strength, and Cyon powers Mims down, but he bridges out.  Cyon answers with European uppercuts to rocks Mims.  This keeps up with “yay/boo” forearms by Mims and Cyon, respectively, and the crowd really favors Mims in the match.  Cyon sends Mims outside the ring, and then attempts a punt, but misses. Mims sends him down from the ring, and slams Cyon on ring apron.  Cyon is angered and throws Mims to the steel steps. There is a succession of slams by Cyon, and a cover for a two count.

Cyon continue to pick his spots with Mims with a northern lights suplex, but Mims keeps fighting back.  Cyon sends Mims hard to the corner turnbuckle, and covers for another two count.  He then hits Mims with short clotheslines, and a belly to back suplex.  Then Cyon gets Mims in a unique arm trap submission, but Mims is able to deadlift Cyon, and slams him hard to mat.  Mims gets back on offense and turns Cyon inside out with a clothesline, and a big strong slam to cover, but Cyon has his foot on the ropes.  Mims climbs up the top rope, but Cyon catches him in a superplex for one, two…no.  Cyon then goes for his DVD finisher, but gets another two count. Cyon then gets Mims in a crossface/Anaconda vice submission called the Mask of Pain by Galli. Mims crawls to the ropes, but Cyon stomps on his arm, until Mims fades. The referee checks Mims’ arm, and calls the match.

Your Winner via Submission:  Cyon

After the match, Cyon goes straight to Austin Idol, and he’s not afraid of the masked man.  He promises that Tyrus will stop him at Hard Times 2, and he will be unmasked for all the world to see.  Cyon walks away, as he looks back as the show goes to credits.

Good, solid matches throughout.  The tag matches were short, but they did add to the roster.  The OGK was a big surprise, and knowing what we know of Ring of Honor’s fortunes of late, it makes one wonder how long they knew about this?

It took awhile, but I’m now starting to get behind the guy I once derisively called The Son of The Question Mark, and I’m curious how this will play out at the Hard Times PPV with Tyrus.

The scoring on this show would’ve been higher, but…the “banter” between Idol and Sky made it hard to engage in the matches at times.  I’ve already voiced this, but it needs to be addressed for the next show or tapings, whichever is first.

Until then, we’ll see you in seven By Any Means Necessary!