NWA’s Crimson talks about his career and upcoming cage match 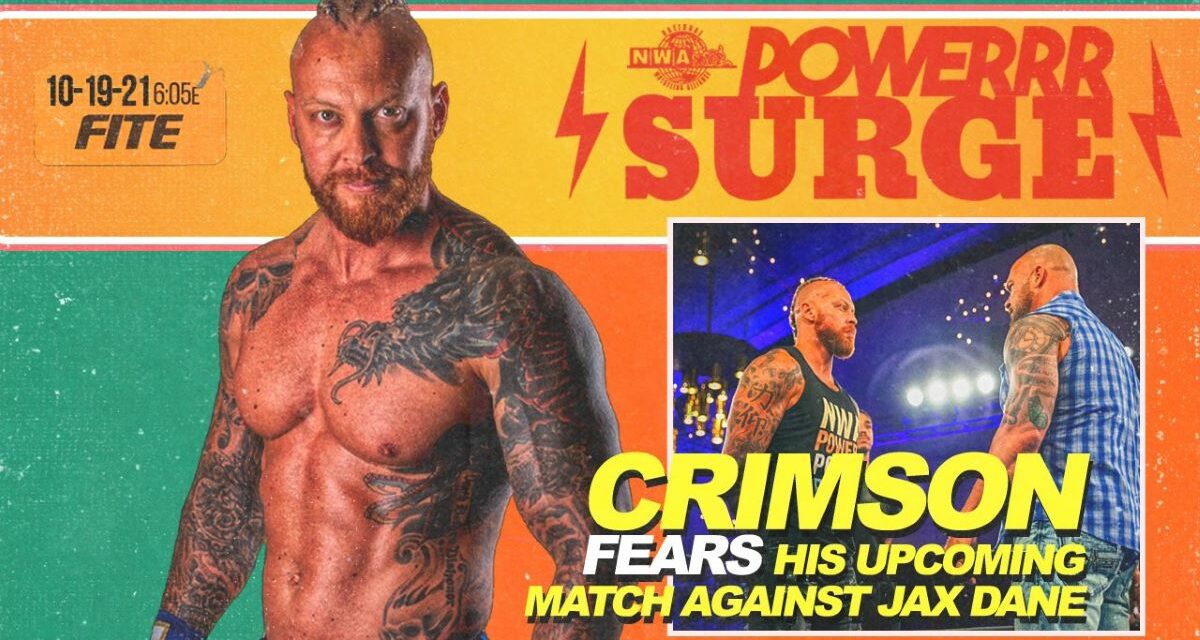 As the National Wrestling Alliance gets ready to present its supercard, By Any Means Necessary, on Sunday, October, 24, at the Valor Hall in Oak Grove, Kentucky, one of the main events is a steel cage match between two former allies and now bitter rivals, Jax Dane and Crimson. Since the start of NWA Powerrr, Crimson has been a big part of the NWA roster in matches and behind the scenes as one of its producers. His match with his former War Kings tag partner will prove to be a brutal match, both physically and emotionally.

SlamWrestling.net caught up with Crimson and discussed, among other things, that he was in the United States Army, 101st Airborne division, serving two tours during the Iraq War. It was during his second tour that the 6-foot-6, 252-pound Anthony Mayweather got into professional wrestling.

“I had a little bit of downtime,” Crimson remembered, “in which me and some buddies over there… we were huge wrestling fans and we would actually get DVDs at the time shipped over to us at our operating base over in Iraq to watch.”

But as his time during his second Army tour was winding down, Crimson was faced with a couple of choices. “First option was going back to college to pursue my degree,” Crimson remembered, “and I didn’t really know what else I wanted to do, but it was just literally suggested by a couple of my buddies while watching wrestling over in Iraq that, ‘Hey, maybe you should do pro wrestling.’”

While in Iraq, he googled wrestling schools, and found one in Nashville. Once his tour finished, he joined the NWA affiliate, NWA Main Event, and wrestled there and on the independent scene from 2007-2010.  He then found his way to TNA. “When I signed with TNA, [I] luckily was around a lot of great talent, a lot of great athletes, great wrestlers, and one of the ones who was probably the nicest and kindness to me at the time was Amazing Red.”

Crimson made his debut as the “younger brother” of the Puerto Rican Red (Jon Figueroa), and that beggars the question: how exactly was that idea pitched? “To my understanding, it was literally me and Red hanging out backstage,” Crimson recalled, “and I do remember Eric Bischoff walking by us and stopping in his tracks, looking at us, you know like… ‘Are you guys related?’ because [we look like] brothers.” 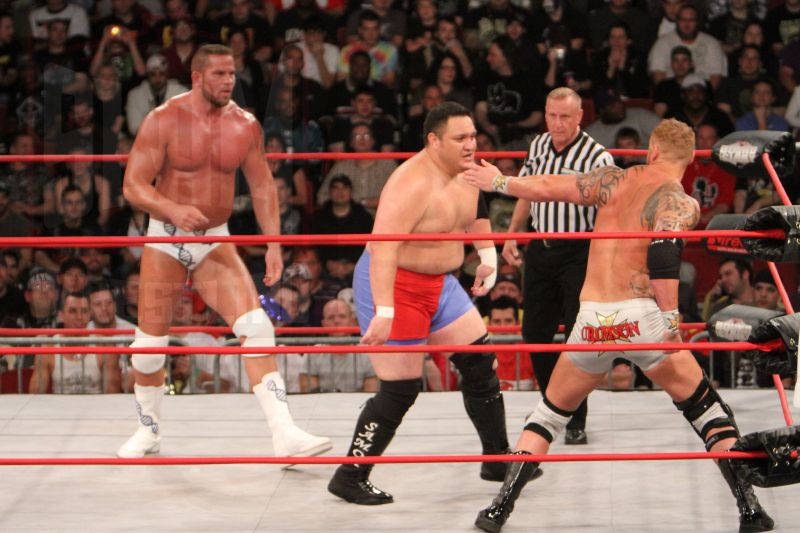 Crimson takes a swing at Samoa Joe as Matt Morgan looks on in a three-way bout at Bound For Glory 2011. Photo by George Tahinos, https://georgetahinos.smugmug.com

From there, Crimson had an amazing run (every pun unintended) in TNA, getting a decent push with an undefeated win streak. But in 2012, the 24-year-old Crimson was released due to budget cuts.

“I’d only been in the wrestling business for a few years. So, to me, it was one of those things that’s pretty devastating,” said Crimson. “Nobody wants to say, ‘Hey, you’re no longer needed at this job,’ especially when it’s something that you’ve been a lifelong fan of, and it’s been your dream to become a professional wrestler.”

While the phone call announcing his release was devastating, it also came at a time Crimson was dealing with a knee injury.  “I wrestled in TNA for about a year with a torn ACL and torn meniscus,” he said, “and I tried to honestly just do the best I could. Tape it up, brace it up, and keep going which I managed to do, but over time it just started getting worse and worse. It was right around the time of a bunch of cuts and releases that I was also like, ‘Okay, I’m gonna need surgery.’ So, although it was pretty heartbreaking news to get that call, it was also time for me to get surgery on my knee and kind of reset regroup and figure out what to do next.” 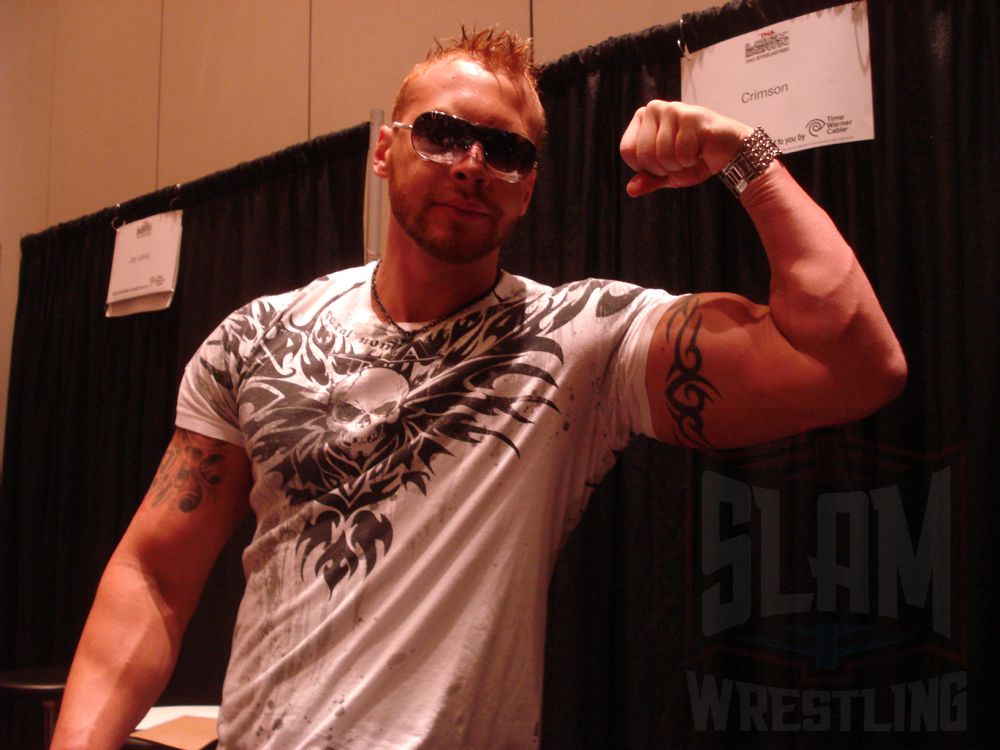 Of course, things change, and Crimson was rehired back to TNA, and that is when things started to clink with a different kind of “brother.”

“Yeah, at the time, they put myself and Jax [Dane] together as a tag team,” Crimson said, “and I’d never met the guy prior to that, but [it was] honestly one of these blessings in disguise.”

He and Dane (Jackson Dane Laymon) were a team called The Veterans of War, with Crimson going under his real name, and Dane was listed as Wilcox. “We had a pretty solid run in the beginning when they put us together,” Crimson said, “and then there was some changes behind the scenes backstage, and basically we were sitting.”

There was no TV time for the Veterans, and that prompted Crimson to walk away from the company.  “No hard feelings. I love everybody of TNA and IMPACT and everybody I’ve worked with there and they’ve always been great to me.  It was one of those things,” Crimson explained. “So, [I’m] technically signed to this company but they don’t have anything for us. … How long can we sit back and let time go by before we have to try and explore other options?”

Those other options included working Ohio Valley Wrestling (OVW). “I’ve got a great relationship, so does Jax, with Al Snow,” Crimson said, referring to the man who ran OVW. “So we reached out to him and said, ‘Hey we want to continue getting reps. We’re not too far away from you,’ because Jax lives in Nashville as well. So we would make that drive and do weekly TV up in OVW.”

The trips to OVW led to Crimson’s current work in the modern day NWA and his own wrestling promotion as well.

“I’ve been running a wrestling promotion in Tennessee since 2015 [called] Tried-N-True Pro Wrestling, and I’ve been friends with Nick Aldis since my early days in TNA,” said the 36-year-old Crimson. “In 2019, my promotion and NWA came together to run an event; a pop up event in my region in Tennessee, and that was, in what I consider and many consider in the independents a pretty successful event.”

This is the event where Jocephus faced David Arquette in a hair versus hair match. “It was a successful event in which we were looking to explore doing more,” Crimson noted, “and it was one of those things I was asked to, to also not only partner with them in a promotional event but also wrestle for them.” (By Any Means Necessary will be co-produced by Tried-N-True Productions.)

“They [were] highlighting that whole adventure or journey, if you will, and I was able to get a match with Nick Aldis and [it] featured on the Ten Pounds of Gold series,” Crimson remembered. “Between partnering up with them [NWA] for the promotion of the pop up event, as well as helping with production on NWA 70, which they ran in Nashville at the fairgrounds and wrestling, [it is a] relationship that continues to blossom.”

“At the time I was in TNA/Impact Wrestling, we were all under guaranteed contracts,” Crimson recalled. “Now, when you look at the landscape with the NWA, the majority of the talent at the NWA are basically fighting for a position, [which] is highly competitive, but at the same time there’s not as many guarantees going around. We want to work with you, we want to book you, these are the things we have coming up, but the rest is up to you.”

Locker rooms can be compared to the military. “I come from a military background, and if you know anybody in the military or had family in the military or anything like that you understand that the Army, the Navy, the Marines, Air Force… doesn’t matter what branch of service you’re in, but you form a brotherhood with the people surrounding you and your life depends on it. That carries over with me to real life, whatever else I decided to do my life beyond military and everything I do.”

Crimson and Jax Dane (a former NWA World champion) made the most of their own opportunity as the tag team known as War Kings, but never won the NWA World tag titles. But over the course of the run of NWA Powerrr, the team fizzled out and led both physically sabotaging the other’s matches. Crimson and Dane held a Slap Fight that broke down into a slobberknocker. Dane also attacked Crimson at NWA 73 before his match with Tim Storm and Thom Latimer.

Now the only way left to settle this will be in a steel cage match at By Any Means Necessary. “For whatever reason, I still don’t know to this day [it] was a moment he crossed the line. He broke my trust, and there’s no doubt in my mind, that when we get inside a steel cage, there’s no holding back.”

It is tough to put in perspective, said Crimson.

“When I think about a match like this with somebody that I rode the roads with for five years now,” he said, “and I trust with my life… it’s a little bit different, especially when you put the two of us in a steel cage to settle this score. And when you think about the stakes, it’s all on the line.”

The only way to see NWA By Any Means Necessary is in person. Also on the show are Trevor Murdoch, Kamille, Nick Aldis, Pope, Thom Latimer, Tim Storm and others. Details on tickets can be found here. It is a 6 p.m. local time start.