The journey of life is never a straightforward, smooth path. And if your journey involves becoming a professional wrestler, the path will feature even more twists, turns and, of course, bumps. And for current NWA star Godzilla Jax Dane, his path also included some heartbreaking detours.

Dane grew up in the small community of Bakewell, Tennessee and while he was always a wrestling fan, his main focus was playing basketball. Dane played the sport all through high school and college where he obtained a degree in Business Administration. After college, he was working as an account executive when he decided that he wanted to explore another path: professional wrestling. 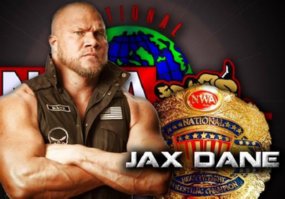 Dane got in touch with Dr. Tom Prichard, who was then a talent agent for Ohio Valley Wrestling. The Kentucky-based wrestling school was the former training and developmental program for World Wrestling Entertainment (WWE). Along with Prichard, Dane was also trained by Rip Rogers and Nick Dinsmore (former WWE wrestler Eugene).

Dane learned he was also not prepared when it came to proper footwear. On his first day of training, he met fellow wrestler Rob Conway, who gave him his first pair of wrestling boots. It was a gesture Dane would never forget and to this day he considers Conway to be his most influential mentor. 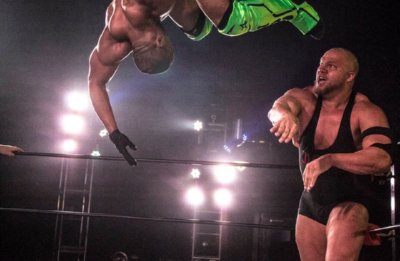 “I saw him and thought he had potential and I asked him if he had a pair of boots,” remembered Conway. “And he said no. I told him he needed to get boots because wrestling in tennis shoes, you were just asking to get hurt. I had an extra pair of boots that would fit him and I lent him a pair of boots.”

Dane kept training and after a few months, had his first match in 2000 against Von Lilas, an encounter that brings him some embarrassment.

“It was terrible,” he laughed. “It was horrible like everybody’s first match. You have jitters and you are worried. You are nervous. It’s the first time you are in front of an audience. It’s harder than what people might think, but it is also very rewarding because it gives you the opportunity to show people all the hard work that you have put in.”

The stars seemed to be aligning for Dane and while he had never signed a contract with OVW, Prichard had alluded to him that he might be a part of the WWE in the future. But then Dane’s mother was diagnosed with cancer and his wrestling career was put on hold. Dane moved back home to Tennessee to help with her care while she was undergoing treatment. With his family being his number one priority, Dane kept working at a corporate job and didn’t think about wrestling for the next few years. He admits that he thought his wrestling window had been slammed shut.

The window quickly opened when Dane was moved to Texas for his job. With the state’s wrestling scene going strong, Dane picked right up where he had left off on his wrestling journey. He was even given the opportunity to wrestle for New Japan. It was during this reemergence of his wrestling career, that the name “Godzilla” was added to his wrestling name.

“The guys would call me a gorilla because I kind of look like one,” remarked Dane, who currently resides in Austin, Texas. “And they added vanilla to it so it was Vanilla Gorilla. Scot Summers looked over at me one day in the locker room and said, ‘You’re not a gorilla, you’re a Godzilla and that’s what you should go with.'”

Just as he was making his return, Dane was injured during a match in Knoxville. He ruptured the tendon in the bottom of his foot that connects the heel to his toe, after jumping over the top rope onto the floor. He was out of action for 13 months. 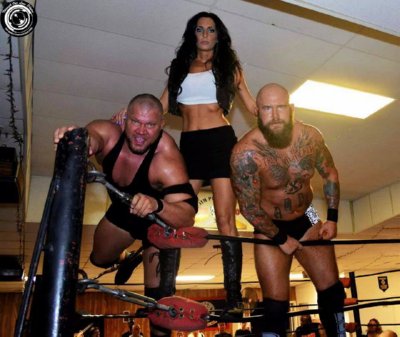 “Once I got back to where I could compete again, I really focused on it and was a lot more appreciative of being able to be active after being down for so long,” revealed Dane.

Once back in the ring, Dane focused on his wrestling persona, a straight-forward, no-nonsense brawler. And while he may be a Southern gentleman outside the ring, he’s all business inside it.

“When I come through that curtain I’m extremely aggressive,” he explained. “I’m all about business. Just get in. Get the job done. I don’t get paid by the hour. Let’s beat this guy up. Let’s win this match and move forward. There’s not a lot of finesse or technique, just basically an ass-kicking machine!”

Dane’s imposing size and power has got him noticed by his peers in the wrestling world.

“He’s like a locomotive,” described Raymond Rowe, a current Ring of Honor wrestler, who has wrestled against Dane and with him as a tag team partner. “He gets going and you literally do not have the fire power to stop him. He is all fire power. All strength and he goes 100 miles an hour!”

Adds Conway, who has also wrestled with Dane as a tag team and held the NWA World Tag Team title with him, “He’s kind of like a Mike Tyson or a Ronda Rousey, the matches can be short, but people talk about it afterwards. People aren’t disappointed.”

Conway also feels that Dane has the necessary mindset for continued success in wrestling.

“Other than his physical strengths which are enormous, he’s very smart,” he pointed out. “He’s a really smart person. He has a goal and he really puts forth a plan to get to that goal. So he’s really goal oriented and physically strong and is really a student of wrestling.”

When asked if Dane has any weaknesses, Rowe laughed hard. “That’s like asking, ‘What’s the weak point on a tank?’ If I could build a wrestler, in a create-a-wrestler type thing, I would create a Jax Dane. He’s a guy I have an enormous amount of respect for. I love him like a brother, but I look up to him like a big brother. I don’t think he knows the amount of respect that I have for him. That’s something you don’t find very often (in wrestling).”

For Conway, the sky is the limit to Dane’s career. It is just a matter of putting in the work and time to get there. 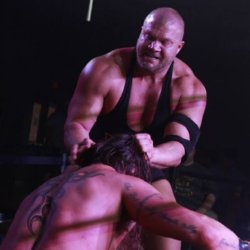 “He has rocketed within free agent wrestling without having thousands of matches,” explained Conway. “Sometimes when he has matches, he’s seeing things for the first or second time when other people have seen the same situation hundreds of times.”

“He is constantly improving,” added promoter Bruce Tharpe. “And his best attributes are his superhuman strength and killer instinct.”

Dane maintains his full-time corporate career, while also being booked to wrestle most Friday, Saturday and Sundays. His lack of free time has paid off as he won the NWA National title, which he currently still holds, on the night of February 6, 2015. But the title win isn’t the only reason why he considers that day the most memorable of his wrestling career. After fighting for several years, his mother lost her battle with cancer and died that same morning. Dane admits it was an emotional day and night for him, but he knows his mother would have wanted him to not miss his match.

“Before she passed away, she had the chance to watch a couple of my matches and she told me she was very proud of what I’d accomplished,” he said quietly. “That made it all worth it. To know that she was proud of me means a whole lot.”Dane says he wants to continue to improve his craft and is open to any wrestling opportunity that that will come his way. But he admits that his immediate goal is to win the NWA World Title and then go on to wrestle for the IWGP World Title. But first up, he has a unification match on Sunday night, April 12th, against Tim Storm for the NWA North American Title; it’s one of four NWA titles on the line over two nights at the Cauliflower Alley Club Reunion in Las Vegas, which runs April 12-15.

“I have every intention of winning that match and unifying the belts,” declared Dane. “And then after that I want to be the NWA World Champion. It doesn’t matter who the champion is, I want a title shot and I want it as soon as possible!”