For J.J. Dillon, the Cauliflower Alley Club is a great event to attend. It is not just a vacation, an escape from everyday life, but a return to the brotherhood and family that he built on the road working the wrestling territories. This year, like so many others, Dillon and Terry Funk will be the emcees for the major awards banquet. 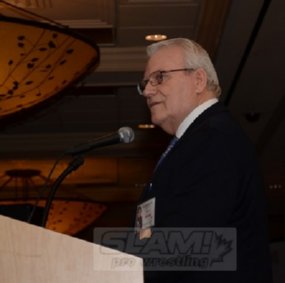 JJ Dillon as the host at the 2014 Cauliflower Alley Club reunion. Photo by Brad McFarlin

The Cauliflower Alley Club has become a special place for Dillon. For many years he had heard of the reunions and how much fun they were, but his schedule on the road or as an executive never seemed to work out. It wasn’t until 2006 that he decided to venture to Las Vegas for the annual gathering and that was only after he received some gentle prodding from his peers at the Gulf Coast Wrestlers Reunion in Mobile, Alabama, a wrestlers-only event.

It was at the 2006 reunion that Dillon had a moment that made him realize how special these meetings really are. “Here is the story that explains the impact,” reflected Dillon. “When I first started watching wrestling as a kid, I was watching New York; it was the era of Rocca, Buddy Rogers, Eddie and Jerry Graham. Buddy Rogers came into the picture and I got to know him for a while and a person who was very close to him was ‘The Big O’ Bob Orton Sr. Real short brush cut with white hair and that would be the late 1950s and I didn’t see Bob Orton until I was in Amarillo in 1978.”

Like many wrestlers of the territory days, Dillon was never sure who he would run into again. “We are talking about some 20 years later,” said Dillon. “He was working the territory with Art Nelson, who I had known since I broke in. Bob was there with his wife, his daughter Rhonda was there, who I got to know real well. That was the last territory that he worked and he was really entertaining guy to be around and he retired from there along with Art Nelson and they had jobs lined up in Las Vegas working security.”

“I am great with faces and sometime a name will escape me,” said Dillon. “Sometimes that just happens to people who work in this business. I will look at somebody and recognize the face, can’t put a name to it and it is embarrassing because you think you should remember everybody. I was in the lobby; I looked across the lobby and saw somebody in a wheelchair. Without being obvious about it I asked somebody and they said it was Bob Orton Sr. I rushed across the room and I was so excited to see him. Rhonda was with him. I talked to him at length and I was invited to come by the apartment and sit by the pool the next day, but I took a rain check because I wanted to soak up everything that was going on. Long story short, Bob Orton Sr. passed away two months later. I realized that if I had not gone to the Cauliflower Alley reunion and missed that experience it made me realize that I wish I had started coming here much, much earlier.”

In an industry of independent contractors, it was easy for friends to lose touch as they looked for wrestling gigs like nomads. The Cauliflower Alley Club has helped to rebuild those bridges and to give final and lasting moments to friendships.

“In the wrestling business, some guys you would see more often than others, especially in the old territory days as you bounced from place to place,” said Dillon. “Sometimes you see them once and then never again. It is nice to go to Cauliflower Alley, there are a lot of guys where the last time I saw them was at the reunion.” 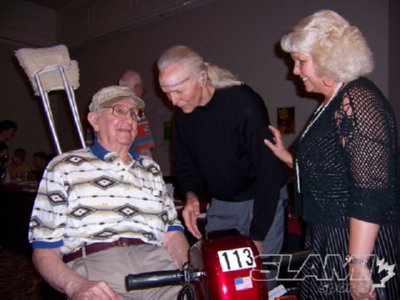 Jimmy Valiant and his wife, Angel, stop to talk with Bob Orton Sr., at the 2006 Cauliflower Alley Club reunion. Photo by Greg Oliver

For many years now, Dillon has been the emcee of the awards banquet with his friend Terry Funk. He does not see his role as a means to entertain those in attendance. Dillon doesn’t have to do a run-in to save the belt for Tully Blanchard. “I don’t think it is what I do best,” said Dillon of emceeing the event. “I am not a great TV commentator. I am not a stand-up comedian. I realized that my function of the emcee is not to be the focal point of the evening, but to be the facilitator of keeping the night going in an orderly fashion.”

When asked how he keeps a bunch of wrestlers under wraps so the awards can be handed out and completed at a reasonable time, Dillon reflected on his connections to his peers. “Of the people who attend I have known them or worked with them and have some kind of personal relationship with them and I think that is an advantage.”

With the Funkster by his side again this year, Dillon is thrilled to share the stage with his wrestling brethren. “So, Terry and I have been kind of tag partners for the main banquet for many years,” said Dillon. “We know our role is not to be the centre of attention. My job is to keep it moving along so the people can have their time to speak from the heart; many have their families with them and acknowledge the support that a family system did for them.”

For J.J. Dillon it is the connections that keep him coming back as a member and as emcee. “It is the camaraderie of going back to see guys I otherwise would not have seen,” said Dillon. “I leave there with the feeling that I have taken away more than I brought with me.”