Diamond Dallas Page has been a lot of things in the wrestling business and traveled to a lot of places, and gone all the way from a manager in both the AWA and WCW to World Champion. All of those accomplishments are a testament to a fabulous career, but what he is most proud of is helping others. That is why he is being honoured by the Cauliflower Alley Club with the 2015 Jason Sanderson Humanitarian Award. 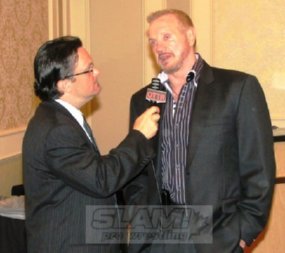 To understand the significance of the award Page is receiving you need to know the ethos of the accolade.

“One of our former board members Jason Sanderson is a man who has been quite the philanthropist not only financially, but with his time and talents,” said Cauliflower Alley Club President Brian Blair. “He has worked with kids. He has gone over to Africa to help. He works in churches and is a bishop. He is just a wonderful guy. He is kind of like the spirit of what a humanitarian award is and it is named the Jason Sanderson Humanitarian Award.”

Famous manager of the Four Horsemen, JJ Dillon, felt that the Humanitarian Award represents selflessness. “The Humanitarian Award is important because it is symbolic of people who had success in the business and then turned around and used that notoriety to do some good,” said Dillon.

Dallas Page is a larger than life kind of guy. He loves to talk about the things he is passionate about and he is passionate about helping people. One of the ways he has helped people is by developing DDP Yoga. One of his greatest success stories is retired U.S.A. military veteran Arthur Boorman. The man walked with canes, knee braces and was severely overweight. After working diligently with Page’s yoga program, he was able to shed the weight, throw away the knee braces and canes, and is now living a happy and productive life.

The kind of impact he is having on people across the world is amazing.

“If five years ago, if someone had asked me, it wasn’t called DDP Yoga yet, but I knew I was touching lives,” said Page. “I knew what I was doing was real. At some point people are going to get what I’m doing.”

Something else he has done speaks to his character. His actions show he is a true friend and humanitarian. While he never made mention of the two former wrestling superstars when talking to SLAM! Wrestling, it is well known that Page has aided some of wrestling’s most severe cases of addiction, Scott Hall and Jake Roberts.

“Dallas has done a lot of good for a lot of people, specifically, a very close friend of mine Scott Hall,” said WWE Hall of Famer Kevin Nash at the Niagara Falls Sports Expo. “He was influential in getting him back on track towards recovery. I was at Madison Square Garden a couple of weekends ago and he looked fantastic. Dallas has always had a big heart. He is a good guy and it is very fitting that he gets that award.”

Blair was amazed at Page’s heart and humbleness. “Dallas Page, we felt he was a great humanitarian,” said Blair. “He does things he does not brag about and he is a great guy. He has really helped Jake Roberts out and has taken several of the boys in, at his own expense. He has literally babysat them until they quit drugs and got their lives together. Dallas is very deserving of the award and it was an easy choice.”

Dillon was amazed at Page’s dedication to his friends. “He has helped people out, but the main thing he has done is intervene with a couple of the guys who, without being judgmental; it is tough being on the road,” said Dillon. “You are vulnerable to many things and many temptations. Some guys take it in stride, some guys are consumed by it and it negatively affected their lives and health. I am not speaking out of turn when I am talking about Scott Hall and Jake Roberts, where they have gone through various rehabs and were really having a tough, tough time getting their life back in order and when someone invites you to move into their home with you and it is hands on basically around the clock to give you support. That is a lot to ask of anyone to do and he has done it with these two cases in particular. I’ve seen Jake and I’ve seen Scott and they both seem so much better.”

For all of Diamond Dallas Page’s promoting of his yoga system, he really is a humble man who helps people out of the kindness of his heart. He is a rare individual who puts others before himself. “Looking back at the Cauliflower Alley Club, they are giving me the Humanitarian Award and that there is so humongous,” said Page.

“Dallas deserves a lot of credit for what he has done for them,” said Dillon. “I think that is a big part of what the Humanitarian Award is, recognizing all that he’s done to help other people without anything monetary for him it is just the way he has chosen to give something back to the business that is very positive.” 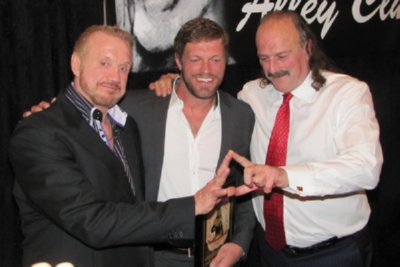 At the Cauliflower Alley Club banquet, Page will be given the award by his close friend. “They have Jake “The Snake” Roberts inducting me for the Humanitarian Award it is a big deal,” said Page, who will also be receiving a Men’s Wrestling Award.

The Cauliflower Alley Club has certainly made a wonderful decision to honour Dallas Page for what he has done to help people. Never at a loss for words, Page, summed up his feelings about the award and his life best. “I love what I do! What is better than changing lives?”