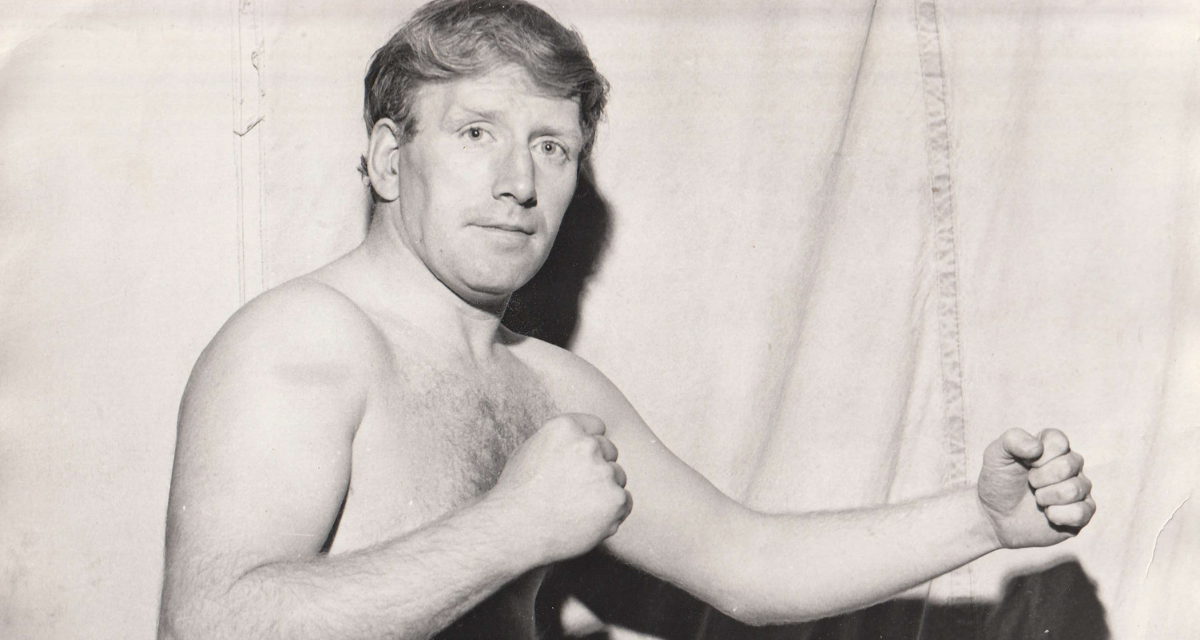 On Friday, October 22, 2021, Jim McKenzie was posthumously inducted as the seventh member of The Professional Wrestling Hall of Fame for Scotland. The induction ceremony took place during a Civic Ceremony held at the City Chambers of Glasgow, Scotland, and the plaque was presented by presented by Philip Braat, Lord Provost of Glasgow.

Some details of McKenzie’s career, courtesy The Professional Wrestling Hall of Fame for Scotland:

The son of a professional singer, James Miller McKenzie was born in 1935 and grew up in the Gorbals neighbourhood of Glasgow. Having developed his natural strength by working as a builder of fireplaces, the wiry youth also pursued an interest in competitive athletics, including amateur wrestling. In 1955, McKenzie would capture his first major prize by winning the featherweight championship of the Scottish Amateur Wrestling Association.

After nine years in amateur competition, Jim McKenzie decided to make the transition into the professional wrestling industry in 1961. McKenzie would develop his skills following his first match against the reigning World Lightweight Champion George Kidd to become a major force in the weight division.

Showing tremendous promise in his early years, Jim McKenzie quickly became a rising star in Joint Promotions and would be crowned the Scottish Lightweight Champion in 1964. In his reign, he would defend the belt against Ian Gilmour, Terry Nylands, and many other notable contenders. Some of his greatest challenges came from fellow countrymen Jim Elder and Bill Ross, who enjoyed brief interruptions with the national title before McKenzie regained the championship. During this period, he would become of the most visible Scottish talents to participate in bouts showcased on ITV’s regular coverage of professional wrestling, which were broadcast to millions of households across the United Kingdom. Beyond his frequent appearances on the small screen, Jim would later make a cameo on the silver screen, with a role in the 1973 film The Wicker Man. 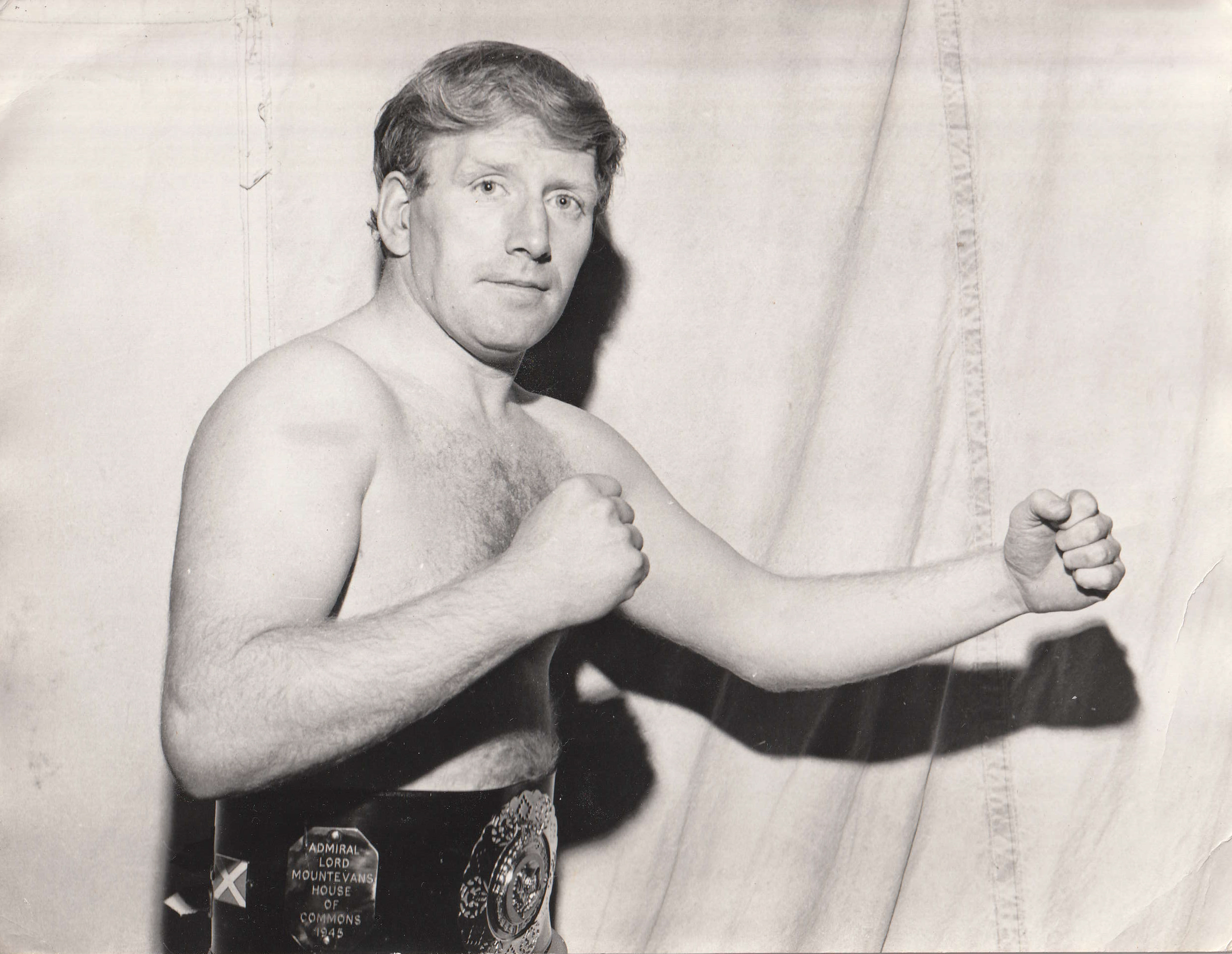 As a major titleholder with national prestige in Scotland, Jim McKenzie would often be involved in major bouts for other accolades. Despite his weight disadvantage, he was nominated to compete in a televised tournament to recognise a British Welterweight Champion in 1966. He would also challenge for the British Lightweight title, including a famous series against Brian Maxine in 1972.

Despite earning an illustrious status as a longstanding singles champion within the lightweight division, Jim McKenzie would also create a legacy as a tag team competitor. He teamed with stars such as Charles ‘Chic’ Purvey and Tom Dowie in various international contests, and memorably developed a formidable partnership with fellow lightweight great Bill Ross. The pair, dubbed ‘The Flying Scots’ would engage in notable matches against ‘The Masters’ Alan Colbeck and Peter Preston, ‘The White Eagles’ duo of Terry Jowett and Johnny Eagles, as well as The Royal Brothers, Vic Faulkner and his sibling Bert Royal.

Undefeated as the reigning Lightweight Champion of Scotland, Jim McKenzie quietly stepped away from the ring at the dawn of the 1980s. He would find success in the hospitality industry, and ran various bars, hotels, and golf facilities across the country. This decision also allowed him to concentrate on his family life with his wife Helen and their three children, Ken, Ian, and Gillian.

Over a decade after his active career as a professional wrestler ended, Jim McKenzie returned for an exhibition contest in Leadhills as part of the village gala, which would become his final match. On 14th March 2004, the life of Jim McKenzie came to an end, but he is fondly remembered by the wrestling community as one of the premier lightweight talents during a golden age for the sport. 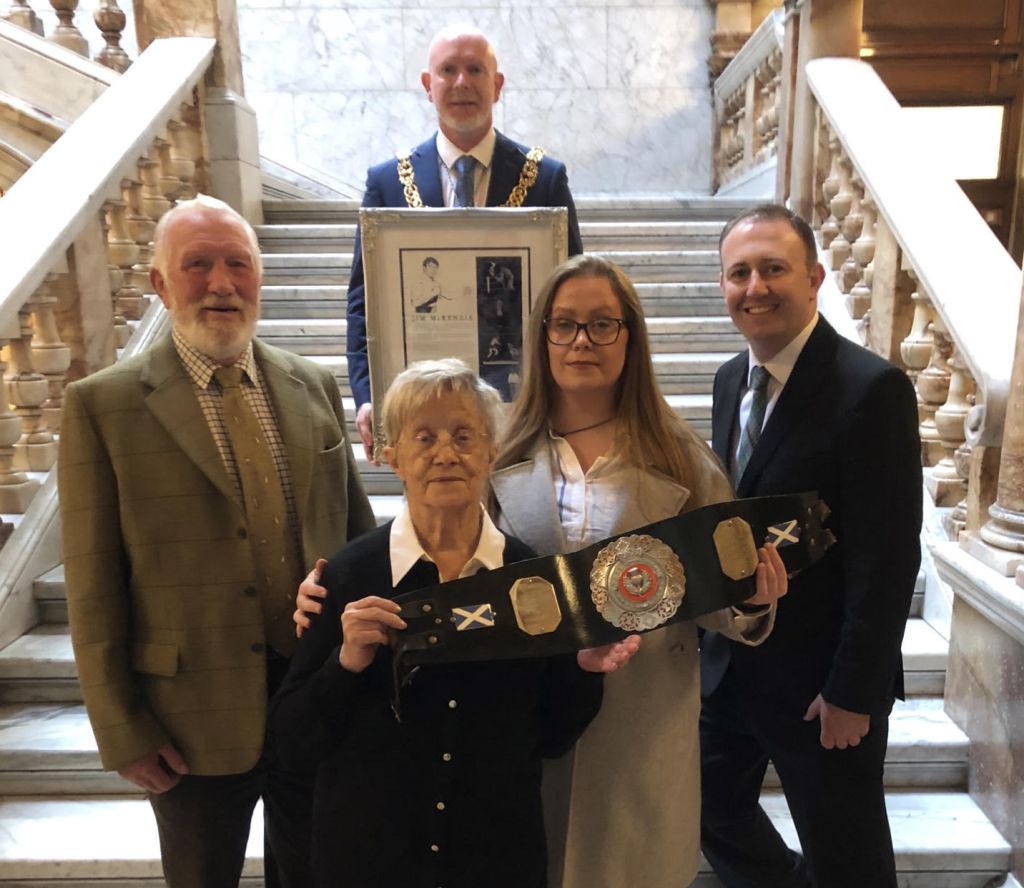 Presenting at Friday’s ceremony were, far left, Bill Ross, his old opponent who he traded the belt with and who was in a team with McKenzie called The Flying Scots. Behind is Lord Provost of Glasgow (Scottish version of a mayor). At the front is McKenzie’s family, his widow Helen and daughter Gillian. On the far right is Bradley Craig, founder of The Professional Wrestling Hall of Fame for Scotland. Photo courtesy Bradley Craig.