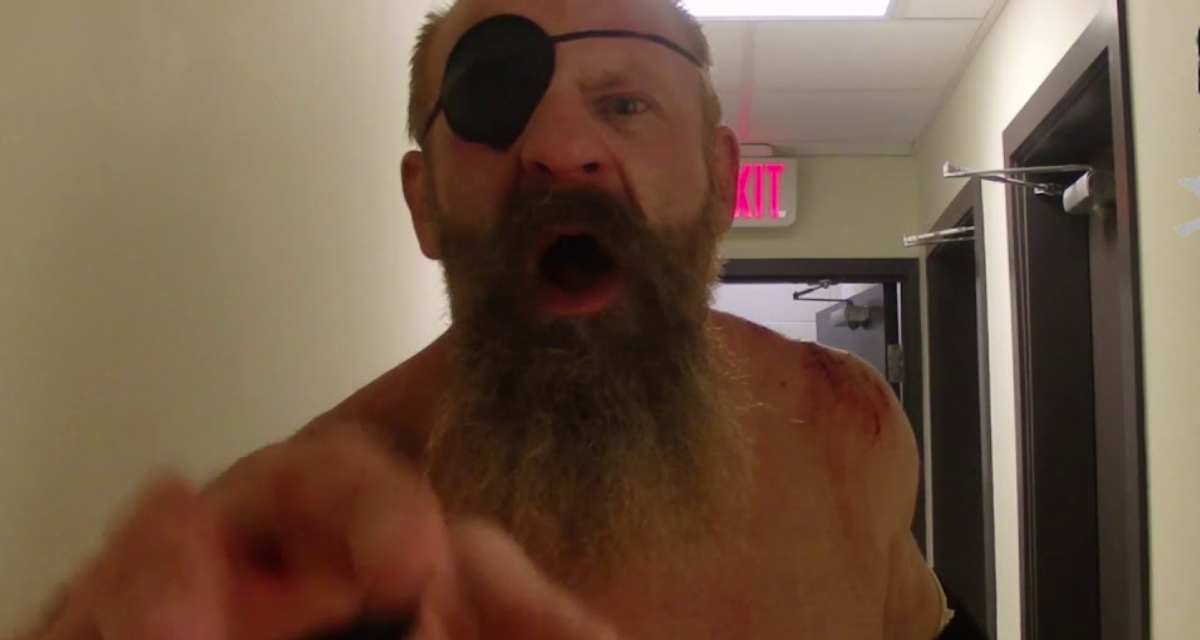 “Viking Lord” Vince Austin is a very intense character in the ring. Reflecting the roots of his Viking background, Austin transforms into a rage-filled, explosive man ready to destroy all comers.

However, when he’s not putting on a crazy promo or smashing somebody’s head in, Austin is really a kind-hearted man who values the old-school mentalities of hard work, dedication, and respect.

Austin’s first taste of wrestling actually didn’t start with the WWF. Austin was first introduced to wrestling by his father, who although wasn’t a huge fan himself, took a future Viking Lord to see Superstars of Wrestling during a tour of Newfoundland and Labrador, seeing the likes of Sailor White, Hartford Love, Bobo Brazil, and George Cannon.

It wasn’t until the Viking Lord was in his teens when he began to really pursue wrestling and become dedicated to it. “You know, when I was around 18 back in Newfoundland, that’s when I had my own backyard fed I guess,” Austin chuckled to SlamWrestling.net. “And then, Sailor White came to one of our shows and I remember him coming up to us saying, ‘Blah blah blah, we gotta train somewhere,’ right? So in ’93, I met Sailor White and I started training with him pretty much in ’94 for three or four years or more.”

White is likely the most famous pro wrestler to ever come out of Newfoundland and Labrador, and was briefly a WWWF tag team champion as Moondog King. Austin and White formed their own tag team of sorts in 1998, launching the Cutting Edge Wrestling promotion out of St. John’s, Newfoundland. 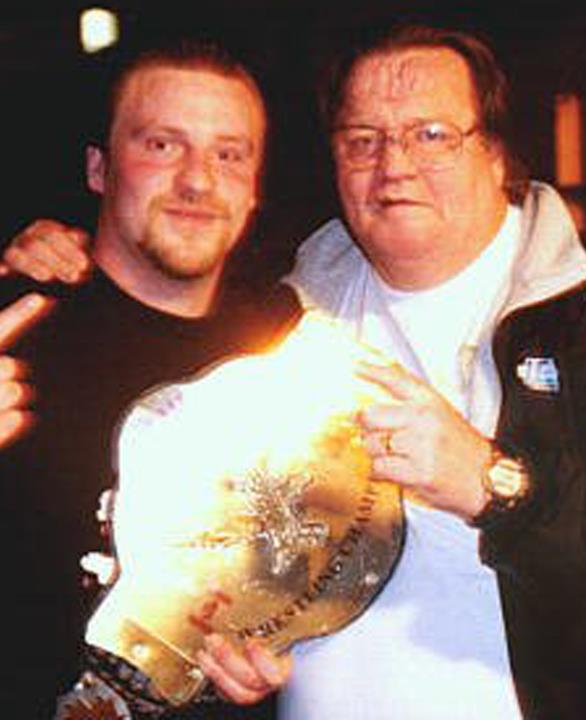 Austin, now 49, was initially entranced by professional wrestling’s hard-hitting, gritty, style that he grew up watching and admiring — though he believes a bit of that eye-catching mystique has been lost in the years since. Taking into consideration his over-the-top character, Austin believes he embodies a bit of that traditional pro wrestling image.

“Everybody is in kick pads and tights now, or shorts, you know? I really want to see that ground and pound, old school… working the body parts or more character-driven wrestling. A lot of these guys are incredible in the ring, but a lot of them are also missing that character aspect in wrestling,” Austin mused; after more than two decades in the ring, he knows his stuff.

Bruce Hart had a hand in Austin’s later training, and remains supportive of the Viking Lord. “Vince is a good guy. Wrestling needs more guys like that, guys who understand what ‘old school’ is and they manifest that in the ring,” said Hart. “He’s great in the ring, great in the locker room. I’m glad to see he’s doing well for himself, and I hope he keeps up the good work!”

Like Hart, Austin looks at today’s pro wrestlers on the indy scene, and compares them to the past.  “I think a lot of them try to be the cool guy, and they’re sort of scared to chase their own character. I’ve never been seen as anything but the Viking Lord, he’s aggressive, he’s got his teeth knocked out. It’s almost like I talk about myself in the third person, yeah? I mean, some guys think it’s weird or whatever, but that’s just me. That’s the Viking Lord.” (And sometimes, Viking Rage.)

The 6-foot-1, 220-pound Austin loves the sport of professional wrestling, and is often consulted by promoters and matchmakers for his depth of knowledge; that’s also why he was tapped to be a manager for a time, as Colonel Austin. He moved to Alberta in 2009, and works in security when not wrestling or promoting. 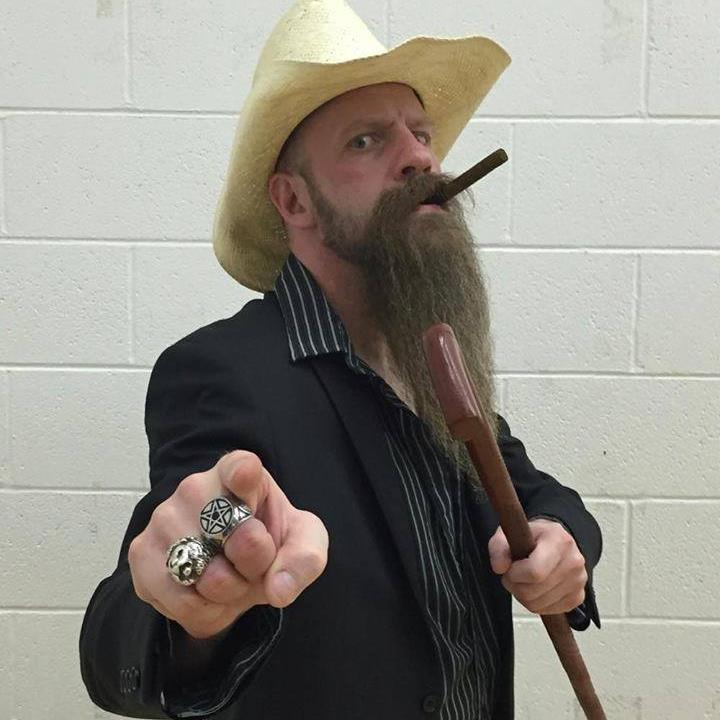 Austin dearly values when he sees aspiring wrestlers showing respect to their elders and mentors. He also appreciates when up-and-coming wrestlers show their dedication to pro wrestling through training or making the right adjustments to accept the culture that comes with the sport into their lives.

“There’s so much potential now out there in the wrestling scene… in Canada alone and just everywhere really. There’s so many opportunities for guys to travel and add to their craft, it’s insane,” said Austin. “But that’s my thing, I really want to see guys who are dedicated to this full-time. I don’t really care if you’re the best in the world, if I can tell you’re heart isn’t 100% into wrestling, then you should probably get out. That’s not necessarily a bad thing, it’s not for everyone, but if you’re not willing to put the hours in, work hard, you’re not going to make it easy. There are a lot of guys who are a flash in the pan, they come in and make their money, then leave. It’s sad because in the last 10 years here in Alberta, I’ve seen a lot of guys who had the potential to make it big. But they were taken back by the politics or the grind, and it hurts to see.”

There are many ways to honor and respect others, in and out of wrestling.

“It’s nice to also see the guys coming up to you, shaking your hand, showing their respect to the vets,” Austin added. “You’re in a locker room. You kind of have to go around and talk to the guys that came before you. That’s sort of been lost in society nowadays, huh? No one really considers it like they used to. Me, I’m still 100% on that… calling people ‘sir’ and not having a big head on me. That’s really going to help you, not just in wrestling, but in life, really.” 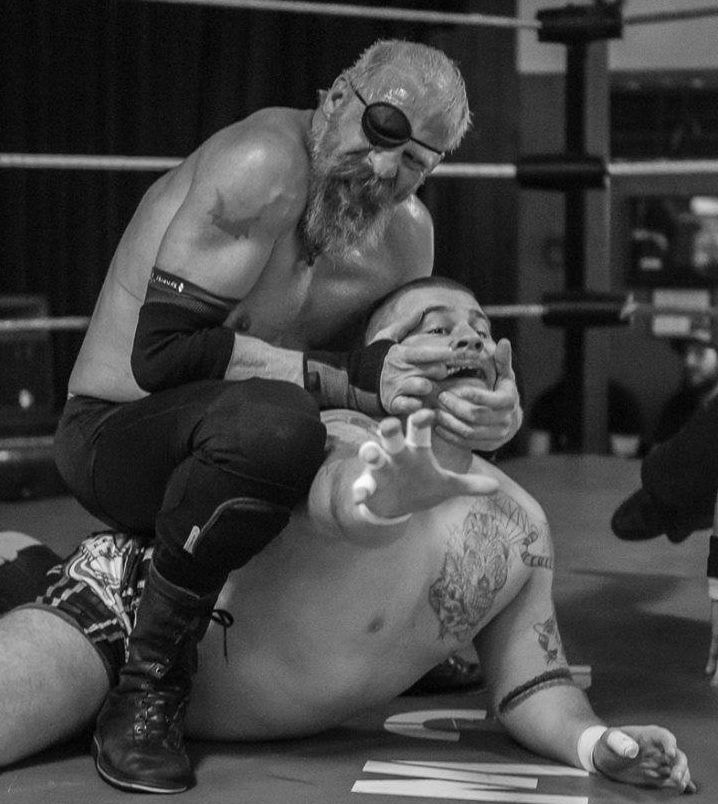 The Viking Lord in vicious action.

The Viking Lord has since transitioned into more of a hardcore, deathmatch style wrestler in the years since his youthful days as a rookie in Newfoundland. The more chaotic action has taken a toll  on his body and psyche. “This deathmatch stuff, I mean I’m middle-aged now, I’ve done the light tubes and this and that. But that’s a whole other level of insanity, right? It’s pure bonkers. I mean it’s entertaining yeah, but I’ve always tried to be a hardcore guy… I loved Terry Funk growing up. I’m willing to put my body through the light tubes or barbed wire. Why? I don’t know why? I’m just crazy, I guess.”