George Cannon was such a Crybaby 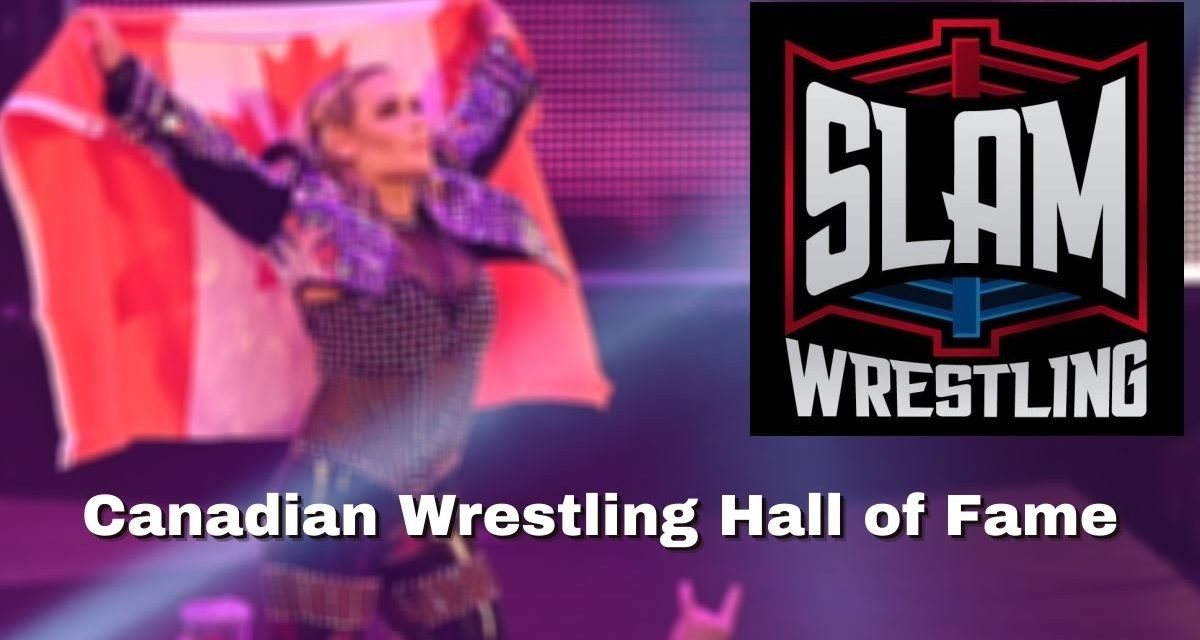 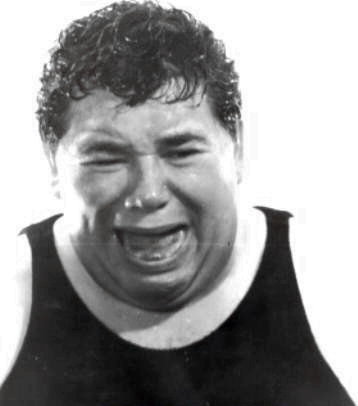 Crybaby got his nickname from his unique ability to wipe the sweat from his eyes so it looked like his was rubbing them and crying.

Before getting into wrestling, Cannon played briefly for the Regina Roughriders of the CFL.

When he returned to the ring in 1959, Crybaby McArthur was born.

Cannon’s heyday was 1968-70 in California where he hosted a variety TV show on KTLA.

In 1970, he moved back to Windsor, Ontario (where he had lived briefly in 1965) and turned to managing. His big break came as manager to the Fabulous Kangaroos.

Cannon was also known for publishing and editing wrestling magazines, and as host to the Windsor-based Contact Sports wrestling show.

In 1983, he was a partner with Vince McMahon in the WWF, but two years later he was forced to give up his share due to a bout with phlebitis.

Right up until his death from cancer in Russell Woods, Ontario, on Canada Day 1994, he was a promoter of small independent shows.

George Cannon devoted his entire life to the sport of professional wrestling. He was a true believer that this sport would continue to grow and generate more and more fans as time progressed. He helped promote and sell this sport over the years to help make it what it is today, a media monstrosity. Maybe I’m a little biased as I am his nephew, but during family get-togethers he was truly the main attraction as he told story after story of his times and escapades in professional wrestling. Everyone would show up when they knew Uncle George and Aunt Gilda would be there. He would bring autographed pictures of all the biggest stars and give them to all of his nieces and nephews, stars like Gino Brito, Hulk Hogan, Roddy Piper, etc. When wrestling was in town anyone who wanted tickets, got tickets, front row, so close you could feel the blood and sweat hitting you. The fact was that not only did he work within the sport but was an enormous fan of it too. We all truly miss him dearly.
Your nephew and biggest fan, Derek Brown

George Cannon hosted superstars of wrestling out of Detroit in the late 70’s early 80’s. He did a very good job. He was very friendly and we often spotted him at Toreo’s gym in Toledo. We spoke to him on several occasions. He was a great guy.
Dave Woods Toledo, Ohio.

I knew George Cannon very well. I, along with Superstar Dave Drason were often guests at his home in Windsor, Ont. He was a gracious host and loved the sport, lived the sport, and promoted the sport on every possible level. I left the Detroit area in 1981 and lost contact with him and was deeply saddened by his passing.
Dr. Eric Goldenberg

My favorite wrestling program when I lived in the Northeast was not the WWWF, it was the IWA for two reasons: Mil Mascaras and Crybaby Cannon and his pontificating aura of managerial technique, as he might put it. He was one of the greatest performers as a manager. Right up there with Captain Lou.
Misawa91

I remember George the most for his great TV show THE SUPERSTARS OF WRESTLING. He had some of the greatest talent of all time on his show. Such wrestlers as WALDO VON ERICH, DOM DENUCCI, LUIS MARTINEZ, BULL CURRY THE SHEIK, STEVE STRONG and the like. But the best running feud was with CRAZY SAILOR WHITE they were constantly at odds with George being the mental superior and standing up to SAILOR WHITE who was a great heel. I also remember George Cannon being the first to really use rock music to great effect. His entrance them for the show was THE WHO’S great song written by the bass player JOHN ENTWISTLE—THE OX [who was also on the show] the first star to come out to music that I recall was CRAZY CHRIS COLT another underrated heel I think the song was ALICE COOPER’S WELCOME TO MY NIGHTMARE Colt even was the first to wear face paint. George was a great original who won’t be replaced.
BRAD MOORE VANCOUVER B.C.

I’ll never forget growing up in Timmins, two things were a constant, Superstars of Wrestling, and Hockey Night in Canada. George Cannon always gave us lots of laughs; the rivalry he developed with Haystack Calhoun who once exploited a “big splash” competition and injured Cry Baby. Other names I still remember are Big Mac, Dark Angel, and Hartford Love.
A.F.

I lived in Windsor in 1980, and George was as big a part of that border town as the Ambassador Bridge or Dieppe Park.
George was running Superstars at the time, and ran house shows from Windsor all the way to the Maritimes. George also hosted a TV show on Saturday night’s on CBC.
One of the best gimmicks I’ve ever seen was George’s ‘Iron Stomach’ shtick, which George would do from time to time on TV. Simply put, George would line up anyone and everyone in the audience, and let each one hit him in the stomach as hard as they wanted. He invited them to take their best shot. And from the teenage boys to the biggest mature men, they would invariably pound George in the stomach and grimace or shake their hands in pain. George, visibly unshaken by the plexus pounding, would sometimes hold a humorous monologue or play by play during the attempted beatings Is that the best you can do?, George would ask.
The shtick did two valuable things: created audience participation and added an air of legitimacy to wrestling. George was the master showman and promoter. I was sorry to hear of George’s passing, and know that he is in heaven, lining up the Angels and inviting them to take their best shot….
DaytonOh4

No doubt, George will be best remembered as the guy who managed the Fabulous Kangaroos, but George was no slacker in the talent department as an individual wrestler.
As a heel, George had the ability to tick off a crowd without saying a word. Working in the American Midwest in the 1960s, George ‘Man Mountain’ Cannon came to the ring in a jacket with the words “I Am Right” emblazoned on the back. Intimidating just by his size, the words warn the crowd of a braggart and bully and a loud-mouthed one at that. Just the image George wanted to portray.
But in the early 1980s, when he was running Superstars out of Windsor, he had turned to his own biggest promotion and main-event attraction. And doing the television commentary as well, he let his real personality bleed through. And no more likeable person could be found anywhere.
George would sometimes mention that he was trying to buy a club in downtown Windsor. He even invited viewers to send in names for the new venture. I left Windsor shortly thereafter and never knew if his efforts were successful.
Glad to see that George Cannon’s role in Canadian entertainment history is not being overlooked.
DaytonOh4

I met George when he was alive, my kids think he is a wonderful person and they love him. George knew his wrestling and the stories he told us were so interesting we use wait to see him and tell more, George like his light opera. All I can say now George we will all remember you and your stories. GOD BLESS GEORGE CANNON.
duker

I first met George in the mid 1960s. I was working in Windsor Ont., at an army surplus store. George and his wife came in to buy some foam rubber. I knew who he was right away because at that time I was a big fan of the wrestling shows in our area. Twenty some odd years later I found myself trying to put on a wrestling show for our local Optimist Youth Band as a fundraiser. I got to spend many hours with George on the phone over several months while preparing for the show. He was a very kind man. Also very entertaining as he treated me to many of his stories about Professional Wrestling. I was sorry to hear of his passing.
G.Wiltse

‘Super Stars of Wrestling’, the weekly TV program that George Cannon produced and co-hosted with Milt Avruskin, combined some highly entertaining matches with an offbeat sense of humour and spontaneity that are notably absent from what passes for TV wrestling today. Some of my favourite moments (in no particular order) include:
– George reading aloud from the collected works of Shakespeare while members of the studio audience took turns punching him in the stomach.
– The Sheik, in a rare TV appearance, capping an interview with George by eating a page of George’s interview notes, while his manager, Eddie ‘the Brain’ Creachman, encouraged him to eat George’s tie.
– The ‘Big Splash Competition’, which consisted of George Cannon and Haystacks Calhoun flopping on top of one another in the ring to settle a dispute about who had the most lethal finishing move. Unfortunately George came out on the losing end, after being subject to 3 ‘big splashes’ followed by several smacks across the face with the horseshoe Calhoun kept as a good luck charm.
These were but a few of the incidents that kept me tuning in to ‘Superstars’ every week. I never knew what to expect, and I was never disappointed. George was one of the great showmen in wrestling. Saturday afternoons just aren’t the same without him.
Brian Hyndman, Toronto