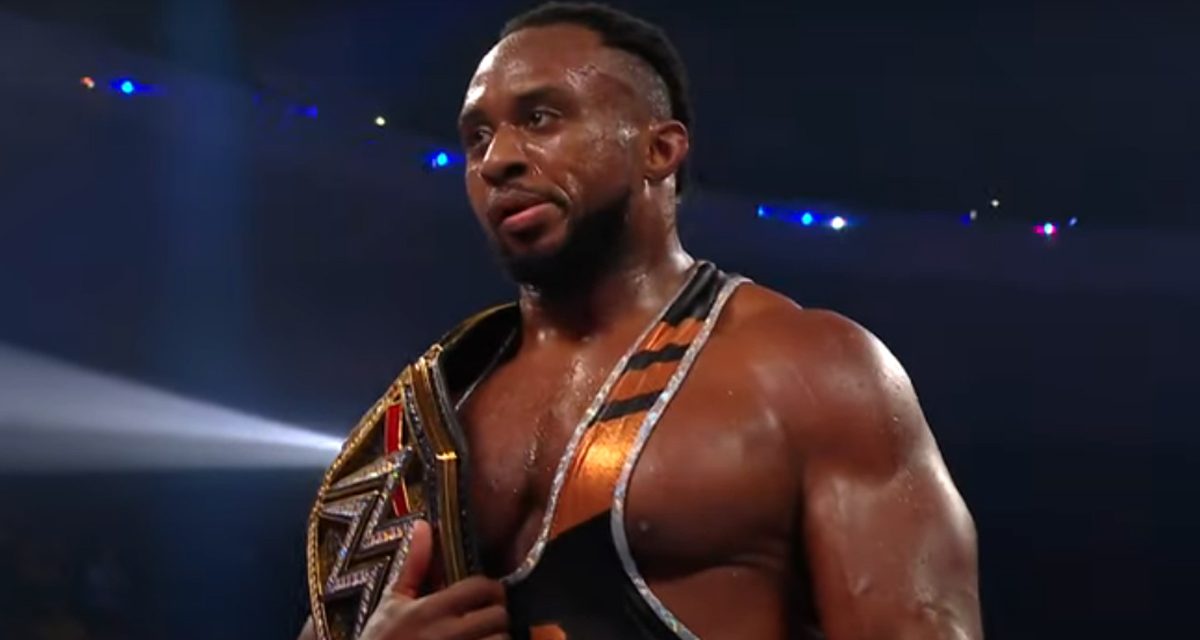 If you were hoping that the WWE Championship would be put on the waist of a deserving champion and not some clod who humps the mat, his title belt, anything in sight with his tongue sticking out of his mouth like child, you would have been very disappointed in the outcome of this week’s Raw.

Unfortunately, Big E is still the champion. Yes, the guy whose moves you can count on one hand and that’s being really generous.

The lead-up to the big ending of Raw was a curious and exciting journey though on a Monday night which hasn’t had much energy or interest in some time. Even Big E’s championship win which was hyped before he cashed in the Money in the Bank saw the ratings falls 10% that week. Unlike Extreme Rules though, the Lashley and Big E throwdowns were booked well. Yes, you read rightly. There were throwdowns, plural.

Originally, Big E and Lashley opened up Raw with their championship match. The interference of the New Day and Sheldon Benjamin, Cedric Alexander in what was teased as a Hurt Business reunion, saw the match thrown out.

Raw GM Adam Pearce was having none of that nonsense. He ordered a rematch to be held inside a steel cage to keep the interlopers out.

That’s a lot of steel, my friend.

As usual when it comes to WWE there was no blood during any of this cage match.

Before the fight finally began inside the cage Lashley rammed the steel steps into Big E’s back. Big E battled back bouncing Lashley off the cage. They bumbled on the top rope for a bit as Big E attempted a Big Ending. 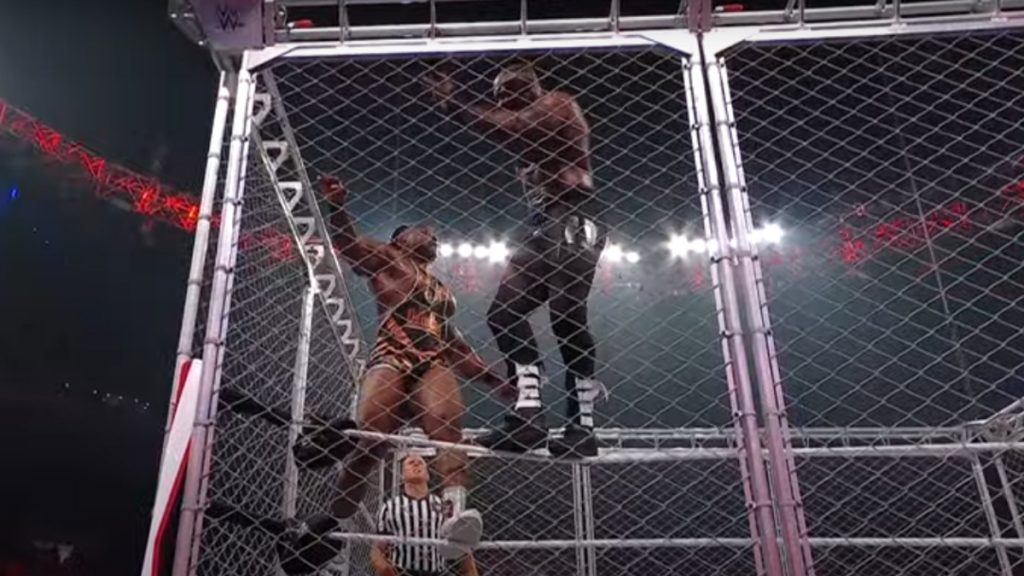 The rage in the cage. Courtesy: WWE.

The Hurt Business stopped Big E from climbing out of the cage and that brought out the New Day. Woods slammed the steel cage door on Lashley’s head as he was trying to escape. In a nice spot, Kofi leapt off the wall of the cage backwards onto the Hurt Business.

The officials make The New Day and The Hurt Business hit the bricks leaving Lashley and Big E alone to fight on. Lashley hit a superplex from the top rope. Big E hits three belly to belly suplexes. A spear off the ropes has Lashley telling Big E to “stay down”. Lashley kicked out of one Big Ending but was pinned by an awkward one from the top rope to retain the championship.

Big E’s win brought out Drew McIntyre who pointed his sword to let Big E know that he is next in line.

The producers are still booking Raw with the quantity over quality mindset and still have those immature and/or irritating characters like Reggie, Doudrop, Tozawa, Karrion Kross, Eva Marie, Alexa Bliss, etc, as well as a bunch of talented wrestlers like Ricochet, Mustafa Ali, Jeff Hardy, Rhea Ripley, Shayna Baszler and others who are just not interesting or compelling at all based on how they are being booked. They are all flat despite having some peak moments here and there.

Despite the kind of booking that’s sabotaging the show there were some really standout spots that pushed this episode beyond the mediocrity we have come to expect from Raw. Just as Lashley and Big E worked their asses off so did AJ Styles and Riddle in their match as did Damian Priest and Sheamus in their No DQ, No Countout, United States Championship Match. Those two bouts were certainly main event and pay-per-view quality based on the efforts of everyone involved. Priest and Sheamus may have not gushed any of the red stuff but they had one of the most ruthless and harsh matches since Drew McIntyre and Sheamus went to war many months ago. Hats off to all six men for ‘bringing it’ when Raw needed them to do so the most.

Winner:  Match thrown out due to interference

Garza starts out hot fighting back hard against a bigger dude. He swarms Erik of the Viking Raiders. When Garza finds himself in trouble Humberto Carrillo provides the distraction. Garza wins this very brief match with the Wing Clipper. While they wait for production to cut away both teams mug on and on for the cameras. Things become really awkward really fast.

I don’t even want to dignify this joke of a title with coverage. R-Truth and Drew Gulak attack Ricochet at the direction of Drake Maverick. Another match gets thrown out. Reggie escapes only to run into Tozawa on the ramp. Reggie bails back to the ring, body splashes Tozawa to clear the way for his escape. A word of advice Reggie, performing gymnastics alone is not actual wrestling. You are a sideshow act taking up a spot which should be for someone who actually put in their time, went to school, etc. You know, a wrestler not a sports entertainer.

Winner: Match thrown out due to interference.

Riddle is interviewed backstage. He chats about Randy Orton not being there tonight. He ends the chat by putting on headphones and dancing around to Orton’s entrance music. Seriously, bro?

Tozawa is still in the ring throwing a temper tantrum. He demands to fight anyone.

Keith ‘Bearcat’ Lee answers the call. The announcers act like Lee is new to the promotion, we haven’t seen him before. Lee has “Bearcat” and claw marks on his new outfit. He also has a constant scowl on his face like he is constipated or something. Lee bounces Tozawa around like a ping-pong ball for the easy win.

Big E yacks on about his steel cage match tonight against Bobby Lashley. He mentions ‘we’ are going to beat you. It might be a slip of the tongue but he is right. The New Day cannot hold onto any championship without constant shenanigans making them the heels like I wrote here, humanoids.

When the match moves to the floor Priest suplexes Sheamus on it. Priest sets up a table on the floor. Sheamus cuts him off throwing Priest to stairs. Sheamus catches Priest with a White Noise through a table. Kendo sticks come into play with Priest clotheslining Sheamus over the top rope with one. After drilling Priest into the barrier and a post, Sheamus Sits on a steel chair in the middle of the ring. Sheamus kicks out of South of Heaven. Sheamus goes through a table set up in a corner. Priest wins with The Reckoning.

Mansoor and Mustafa argue backstage about picking Jeff Hardy as their tag team partner tonight. Mustafa rips on Hardy. Hardy overhears their conversation. Mustafa backtracks with a smile on his face. He cannot wait to team with the legend.

Jeff Hardy working with Mansoor and Mustafa? Why? Who knows? Logic has no place in the WWE. During the match we learn that apparently Goldberg will be appearing with an important message tonight. Too bad they didn’t take the time to promote his appearance before Raw aired. While Mansoor helps Hardy against Shanky on the floor he leaves Mustafa alone against Veer. Veer crushes Mustafa. You know where this is leading.

Karrion is still dressed like Demolition Crap even though just cut a promo backstage wearing a suit. Yes, he was wearing a suit. How does that even make sense? Why? Who knows? Logic has no place in the WWE. The crowd boos the hell out of Kross as he makes his way to the ring. Kross mocks Ryker saying he is his “commanding officer” now. Doomsday Slam and a sloppy Cross Jacket has Ryker tapping out in mere minutes.

Doudrop meets with management. She wants to face Charlotte for the Raw Women’s Championship tonight. Sonya Deville agrees it would be a great decision because Charlotte wouldn’t see the challenge coming. Deville has one request. If Drop wins the title she has to do her little dance. Doudrop, a 30-year-old woman, dances around like a grade school kid who has eaten too much chocolate. Some people just have no pride. Like, zero, none, nada. 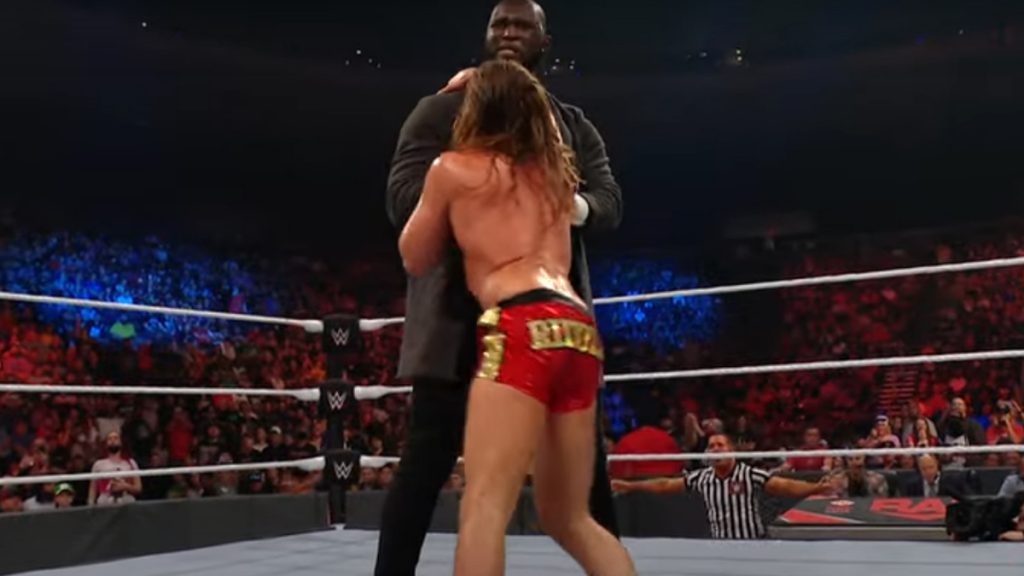 Riddle is about to go for a ride. Courtesy: WWE.

AJ whips Riddle out of “his ring”. He lands at the feet of Omos. Omos just stares down at Riddle as AJ laughs. Styles shows off his amazing reversal skills and superhuman agility. He counters an RKO to put Riddle away with the Styles Clash. Omos gets in on the action with a chokeslam on Riddle after the bell. Whoa, bro.

Baszler’s attack on Nia Jax is replayed and I am laughing all over again at Nia’s horrible acting as she screeches like a cat who got its tail slammed in a car door. Baszler is interviewed about it all. She just grimaces as if she swallowed a glass full of tacks, anti-freeze and lemons then walks away with her deck of cards because she is the Queen of Spades.

How can you take anyone who dances like Doudrop does down to the ring seriously? Charlotte gets battered around the ring by Doudrop who uses her strength to push the Queen around. After a senton by Doudrop, Eva Marie heads down to the ring distracting her. Charlotte retains with Natural Selection. Like we didn’t see that coming. Eva Marie berates a fallen Doudrop. Charlotte clotheslines Marie for stealing her spotlight. Eva Marie versus Doudrop versus Charlotte will be coming to a WWE ring near you very soon. 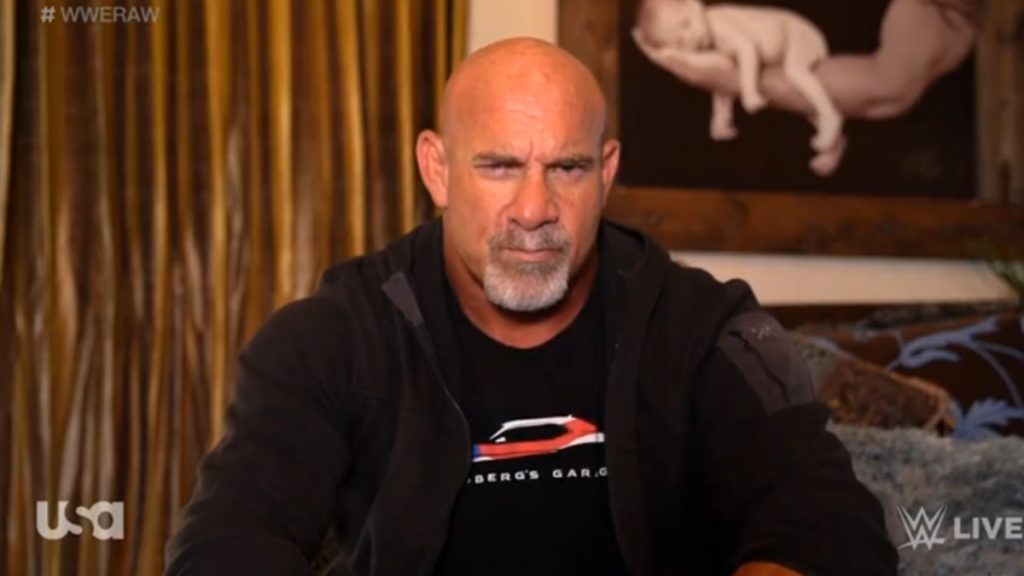 Goldberg cuts a promo on Lashley. As a dad it is his duty to make Lashley pay for what he did to his son. “I am going to hurt you real bad. Hell, if I am lucky enough, I am going to kill you!” said Goldberg. Yes, people. Goldberg said he hopes he KILLS Bobby Lashley. What the hell?!?!?!?!?

Eva Marie is still in the ring. She says she wouldn’t have dropped the ball like Doudrop just did. Eva Marie issues a challenge like Tozawa just did an hour ago. The producers must think viewers have really short memories. Shayna Baszler stomps her way to the ring. No match, she just chokes Marie out. Baszler does the same thing to Marie as she did to Jax last week injuring her arm. The crowd chants…One more time! At least Marie is more convincing than Jax was. So is Baszler the heel or the face? Who the hell knows. Logic has no place in the WWE.

Nikki and Rhea Ripley are interviewed backstage. The writers just recycle the Riddle and Orton dynamic with Nikki suggesting matching outfits and Rhea pissing all over that idea. Sigh.

Raw could be turning the corner but is it too little, too late? While there were some bright spots there is still a lot of lazy booking, childish, kid stuff going on but at the same time wrestlers are low-key swearing in their promos using words like s–t which just like current gambling ads on WWE TV were never allowed on their “PG” broadcasts. What could it all mean?