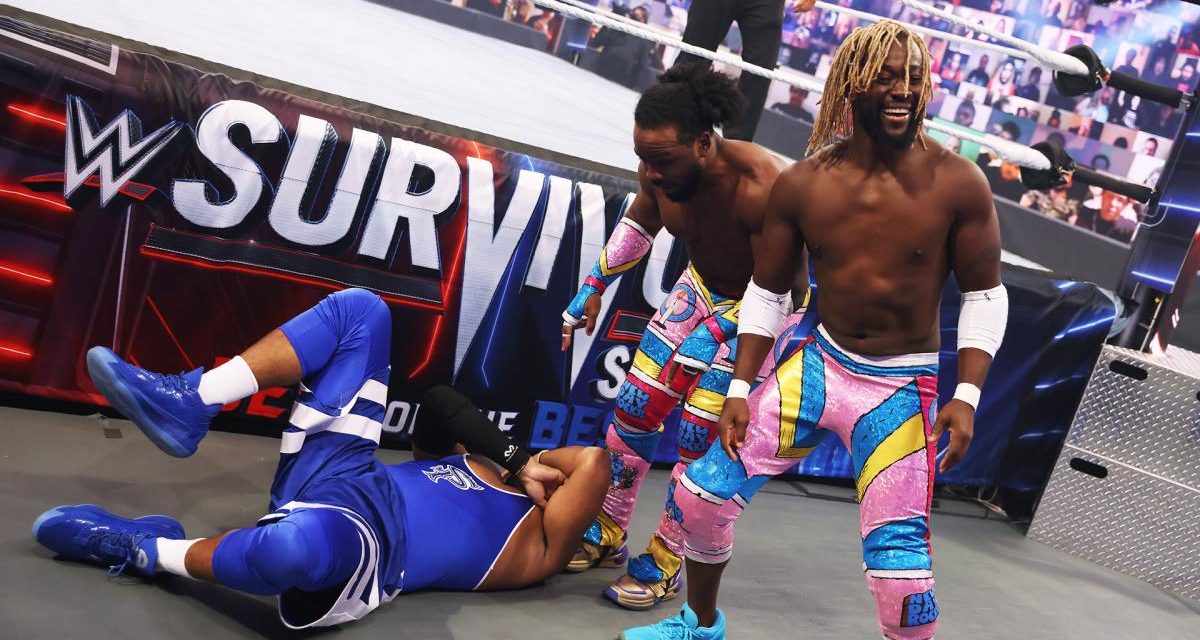 On Raw this week MVP pulled Kofi Kingston aside to have a chat. MVP told Kingston that he seems to have lost that drive, that spark that made him a champion. Kofi is too busy goofing around, wanting to make friends rather than doing what it takes to climb the ladder in the WWE, this according to MVP.

“Kofimania ended because you let it. There are no friends in this,” said MVP about the wrestling business.

Kofi climbed up on his soapbox to prove that he was morally superior to MVP.

“I don’t know how many times I need to tell you this and everybody else but my family and friends are the ones who provide me with motivation to do this. That is why I go out and I do what I do. Somewhere there is a little kid who is watching this television program and they are watching me. They are believing in themselves because of me. That’s why I do this,” he said emphatically almost bringing a tear to my eye…but I know better.

The problem with Kofi’s response is that Kofi Kingston, the character, should not be arguing integrity, morals or ethics with anyone, even someone as shifty as MVP. If you examine their entire history, Kofi and the New Day have made a career out of taking shortcuts and sometimes actually cheating as bad as the heels do to win. In fact, they have won championships doing exactly that, sinking to the level of the heels.

Xavier Woods and Kofi Kingston are portrayed as honourable faces yet they break the rules to win on a regular basis. Case in point, in Kofi’s match against Randy Orton on recent edition of Raw both Xavier Woods and Riddle were at ringside. Riddle does nothing but cheer his erstwhile partner on. In the other corner, Woods deliberately distracts and harasses Orton with his trombone allowing Kofi to get the pin. Kofi and Woods celebrate the hollow victory as if he, they actually earned it.

On yet another edition of Raw, Woods once again causes all sorts of crap and corruption at ringside to give Kofi Kingston an advantage over Bobby Lashley. MVP attempts to hit Kofi in the head with his cane. Drew McIntyre does the right thing as a face by disarming and chasing off MVP but then he turns heel by hitting Lashley in the stomach with the cane. Kingston gets the tainted victory and revels in the win with Woods and McIntyre as if he beat Lashley clean. 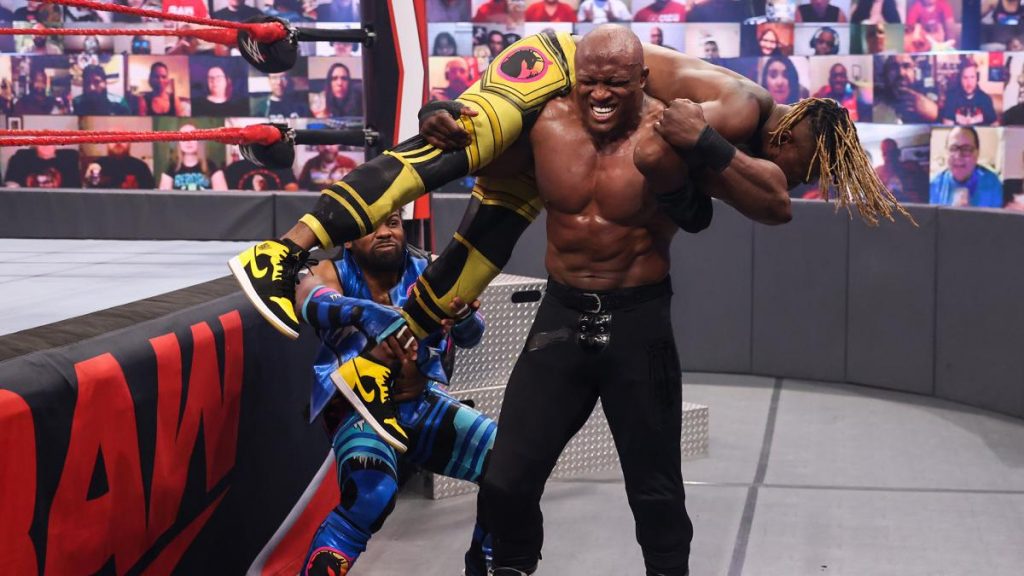 Xavier Woods caught blatantly interfering once again but this time in the match between Kofi Kingston and Bobby Lashley. Some hero, eh? Courtesy: WWE.

On the following Raw, Kingston is still crowing about his tainted win and takes things one step further by being absolute ungrateful ripping into McIntyre for helping him saying he didn’t need his assistance and never asked for it. Let me get this straight. So Kofi is arguing that he shouldn’t be criticized because he never asked McIntyre to come to his aid even though he had no qualms about allowing him to chase off MVP, soften up Lashley and take the pinfall victory without showing any signs of hesitancy or disappointment?

These are not the actions of a hero or the actions of a person who professes to be a good role model for kids. What children are learning from watching Kofi and the New Day is that if you cannot win fairly it is okay to ignore the rules and scam yourself a victory. Not only that but you should be very proud of your actions too.

Sure, Kofi Kingston the persona is just a character on television, however, Kofi’s statement to MVP seemed to blur the line between the real Sarkodie-Mensah and fictional Kofi Kingston as wrestling often does when characters and the people who play them merge. Sarkodie-Mensah is a father to two sons so one assumes that when he speaks of children believing in him, he is speaking about them as well.

How in the world then does he think that his actions either alone or as a member of New Day are an inspiration to any child unless he believes that promoting lazy shortcuts and blatant cheating are positive examples.

Kofi though isn’t the only one whose words don’t match his actions, is talking out of both sides of his mouth. Wrestling these days is full of faces who, well, don’t act like faces. Yes, it is one thing to kick the steel chair a heel brought into the ring back into his face or throw a heel into a steel barricade because they tossed you into one a few minutes later. It is quite another thing though to pull someone’s tights to get the pin or clock your opponent with a steel chair when there hasn’t been any provocation by the heel in any way.

Here are just a few other recent examples… 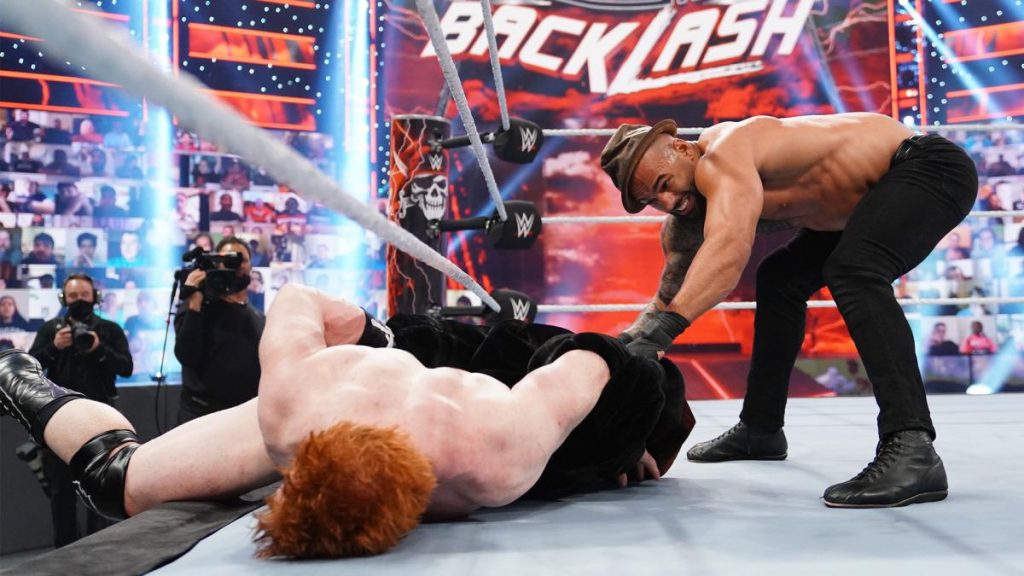 Ricochet, who is described as the WWE’s resident superhero all the time, steals Sheamus’ hat and jacket. That isn’t the action of any superhero I know unless you are an anti-hero like Wolverine, Deadpool or The Punisher. In subsequent appearances, he continues to taunt Sheamus with the stolen clothing which is just plain weird.

On May 14th edition of Smackdown, Shinsuke Nakamura lost cleanly to Baron Corbin. Shinsuke responded by blindsiding Corbin from behind and then stealing his crown out of spite.

Even Christian, the good-hearted veteran on AEW Dynamite, hauled off and slapped Frankie Kazarian for no good reason in a recent bout.

This kind of bizarre behaviour from faces goes on every single week.

You would think wrestlers who have young children especially and present their personas as heroes to those kids would refuse or argue against some of the angles which are proposed to them. It seems some have forgotten that the “ultimate measure of a man is not where he stands in moments of comfort and convenience but where he stands at times of challenge and controversy.”

Being a hero isn’t supposed to be easy. Unlike villains who don’t follow rules, don’t have any moral guidelines and can literally do anything they want because they have no conscience, heroes are bound by their morals and have to constantly make tough, often impossible choices.

In the eighties, there was a clear difference between faces like Hulk Hogan, Ricky Steamboat and The British Bulldogs and heels like Ted Dibiase, Bobby Heenan and Roddy Piper. The era of the anti-hero took over pop culture in the nineties with everyone wanting to be Wolverine, The Punisher or “Stone Cold” Steve Austin.

Now we are in a period of pro wrestling where the differences between the heroes and the villains has become blurred or in many cases erased entirely. It is a period where often faces revel in cheap, tainted victories. Where unprovoked faces resort to using illegal weapons. Where faces sink to the level of the villains instead of rising above them and make weak excuses or blame others for their lapses in judgment.

Where indeed have all the cowboys gone, Paula Cole.