RAW: The ThunderDome becomes a house of horrors for Shayna Baszler 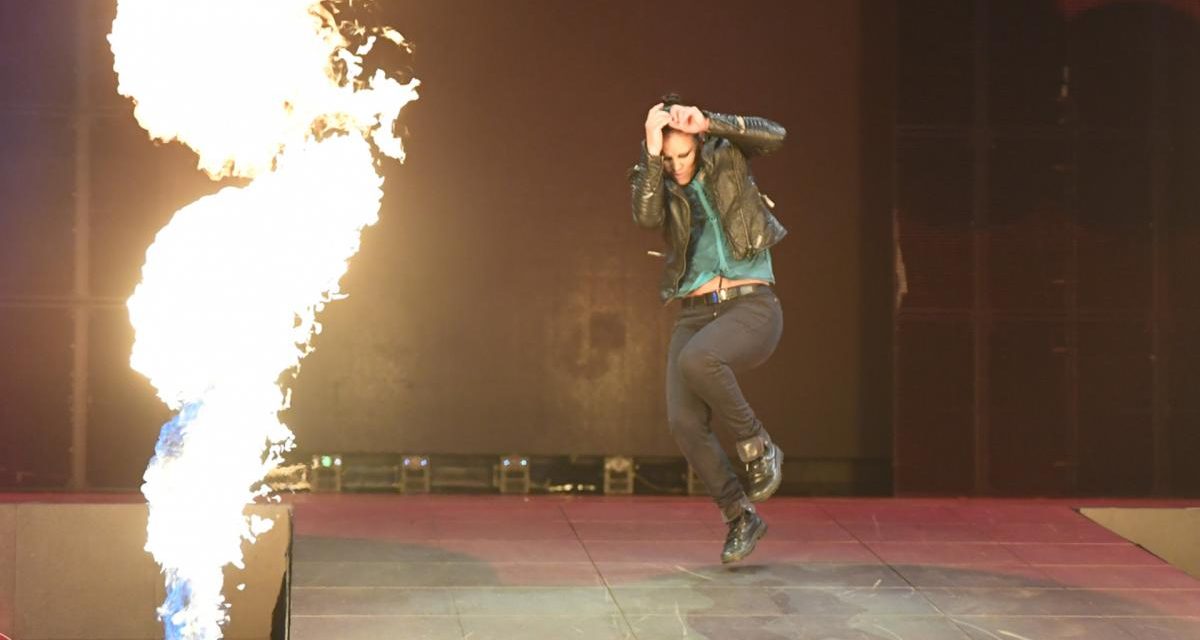 Another week, another WWE release. And if can happen to Braun Strowman, who was most recently in the main event picture with the WWE champion, it can happen to anyone. At least his story line was pretty much over, unlike Aleister Black. And with Lana’s release, her tag team partner Naomi, is left hanging. Not that her tag team with Lana made much sense though. The ThunderDome is winding down its time, but we still have some weeks to go. Into the dome we go!

The tag team champs, AJ Styles and Omos, walk out to address the tag team division, who are in the ring for a battle royal. Styles feels obligated to defend the titles on the road and speaks to each team in the ring. Speaking of teams, how is it fair that Lince Dorado and Morrison are alone. Their respective tag team partners are hurt, but it really doesn’t make sense.

Morrison actually isn’t in the ring, yet. He walks out pushing Miz in a wheel chair. Miz calls the tag team division dry, but Morrison has his drip stick. He is volunteering to enter the battle royal alone. Unfortunately in his haste to pose, Morrison lets go of the wheelchair, sending Miz down the ramp. Morrison saves his partner before disaster strikes.

RK-Bro vs. The New Day vs. T-Bar and Mace vs. The Viking Raiders vs. Lince Dorado vs. John Morrison – #1 Contender Tag Team Battle Royal

Of course, Johnny Drip Drip in the first one eliminated. Despite being eliminated, Riddle slides into the ring to take a Trouble in Paradise for Orton. Randy dumps Kofi out of the ring, only to have the Viking Raiders eliminated him. Erik and Ivar are the last team standing.

Backstage, Charlotte Flair interrupts Adam Pearce and Sonya Deville. She wants her loss to Nikki Cross stricken from her record. They let her know that there is nothing they can do about it. Flair takes it personally and demands a rematch. Rhea Ripley steps in wanting a rematch of her own with Cross. Sonya suggests that Flair and Ripley team up to take on Cross and a mystery partner.

The Viking Raiders are hyped for their upcoming tag team title match. Turkey legs for everyone! Except Omos all ready got his hands on one. Styles calls them wannabe Vikings. Erik honors the Vikings that came before him by the way he lives.

Elias is in the ring, but we want BOOGS!!!!!!! Anyway, Elias blames Jaxson Ryker for not winning the tag team title last week. a freshly shorn Ryker attack Elias from behind, pummeling him in the corner.

Ryker absolutely dominated Elias in the match, beating him inside and outside the ring. Elias slows him down with a clothesline and a spine buster, but can’t get the pin. Ryker with a choke slam and Elias rolls to the floor. He has had enough and walks up the ramp. Elias gets counted out.

Winner via count out: Jaxson Ryker

Drew McIntyre has decided to bring a sword to a contract signing. He doesn’t want to wait for Lashley, go so far to spell out what is going to happen when the champ does arrive. He tells a story and wants to sign, but is interrupted by MVP on the Titantron. The champ finally makes his entrance.

MVP congratulates Drew for manipulating his way into another title match. MVP wants Lashley rewarded for his compliance last week. If Drew loses at Hell in the Cell, he will never get another WWE championship against Lashley. McIntyre quickly accepts, but wants a match with no outside interference. He wants Lashley inside Hell in a Cell. MVP accepts on behalf of Lashley. The two sign the contract and then exchange some more words. Drew ends the segment by cleaving the table in half with his sword.

Sarah Schreiber wants to know what has gotten into Nikki Cross with her string of victories. Nikki just believes in herself and she will regret not taking the chances. Nikki has selected a tag team partner, Asuka.

The current champ, Sheamus, makes his way to commentary sporting a face mask after Carrillo broke his nose last week. Before the match, Sheamus talks about the injustice of these two getting a potential title match after breaking his face. Humberto and Ricochet feign flying over the top rope to makes Sheamus flinch, but then Ricochet attack Carrillo from behind.

Sheamus has nothing to worry about though, when Ricochet hits Carrillo with a Spanish Fly off the apron to the floor. Both men are down as the ref makes the count. Neither man gets to his feet as the ref counts ten.

Sheamus is very happy as he heads to the back.

MVP approaches Kofi Kingston backstage. Kofi tells Xavier he got this. MVP is impressed with Kofi, but he isn’t surprised in the results. MVP has always been a fan; he watched KofiMania take over the world. He was so proud when Kofi won the WWE title and it spurred MVP to return. But then KofiMania just ended. And it ended because Kofi let it end. Kofi doesn’t want his advice; his family and friends motivate him.

Mustafa Ali asks Mansoor if he is ready for his match with Drew Gulak. Mansoor says he is. Ali wants to know what he is going to do when Gulak starts to cheat? He can’t assume that everyone is going to play by the same rules that he does.\

Hardy wants show Cedric a lesson in humility. Respect is earned. while Cedric wants to end Jeff Hardy. Out with the old and in with the new and all that.

Hardy kicks Cedric to the floor, but Alexander is able to get back in the ring and cut down Hardy coming off the ropes. A hurricanrana sends Alexander to the mat. Hardy follows with an inverted atomic drop. Cedric takes Hardy down and goes up top. He mocks Hardy, but Jeff catches him with a kick. Hardy hits the swanton bomb and covers to get the pin.

Backstage, Charlotte Flair and Rhea Ripley try to get on the same page. Flair wants to take care of Asuka, while Ripley takes care of Nikki. Ripley says her title overrides Flair’s experience, so they will follow her lead.

Nikki Cross and Asuka vs. Charlotte Flair and Rhea Ripley

We don’t even make to the first commercial break before Flair and Ripley throw down with each other. Flair hits the champ with a forearm shot on the floor. After the break, they two are back to working together, for now. That is until, Flair tags her self in. Ripley does exit the ring, but immediately calls for a tag. Flair slaps Rhea across the face to tag her in. The team finally disintegrates when Ripley punches Flair after breaking a pin and yelling at the champ. Flair hits Ripley with a chop block and Natural Selection. Nikki scampers back into the ring to make the cover.

Mansoor and Gulak trade head locks. Mansoor with an arm drag into an arm lock as Ali watches from the back. Gulak with a knee breaker and then goes to work on the same leg. Mansoor forces his way back to his feet, but has to kick out of a roll up. Gulak with another roll up and he grabs a handful of tights. Mansoor is able to reverse the pin and get the three count.

Randy Orton allows Riddle to finally talk and he is hungry and all he wanted to do was invite Kofi to Burger King. Orton tells Riddle to quiet down. Orton isn’t sure if he will come out of his match tonight.

Riddle with a Bro-ton and Woods starts playing the trombone, distracting Riddle. He likes the music, but this isn’t the time or the place. Kofi takes advantage, punching Riddle into the corner. Randy Orton’s music hits and the Viper makes his way to ringside.

Kofi with a drop kick off the second rope and then nails Orton with a sliding kick. Woods taunts Riddle with the trombone, only to get slammed onto the announce table by Orton. Kofi takes out Orton with a trust fall.

After the break, Riddle with an exploder suplex out of the corner and follows with a PK. Kofi lands on his feet on a suplex and stomps Riddle into the mat. Kofi with a splash off the ropes, but only gets a two count. Kofi goes up top, but Riddle cuts him off with a slap to the face. Kofi blocks the superplex, sending Riddle to the mat. Kofi follow with a knee to the back of the neck.

Riddle sends Kofi to the floor and then stops him cold from getting back in the ring. Riddle catches Kofi on the apron and delivers Orton’s avalanche DDT. Orton yells at Riddle to finish him. Riddle pounds on the mat, but Kofi blocks the RKO. Riddle dodges Trouble in Paradise, but can’t avoid a second attempt. Kofi hits it and covers to get the win.

Backstage, Shayna tells Nia Jax that the tension between them is being caused by Alexa Bliss and Nia’s relationship with Reginald. Jax tries to warn Shayna that Alexa is dangerous. Shayna doesn’t want any help and will show Alexa what happens when someone crosses her.

Alexa tells Lilly that tonight they may make a new friend> Shayna Baszler makes her way to the ring, throwing down a rocking horse. Bliss tells her that wasn’t nice, but they want to give her a chance to be friends. All Shayna has to do is apologize to Lilly. Baszler will not tell a doll that she is sorry. She calls Bliss delusional, blaming her for Reginald’s condition and the loss of the tag team titles. After conferring with Lilly, Bliss wants Baszler to know it would be in her best interest to apologize. She grabs the doll, calls its stupid and tosses it down.

Bliss decks Baszler and is tossed from the ring. Baszler stops her by stepping on Lilly. She stomps on the doll, causing the ThunderDome to malfunction, with screens flickering. Pyro blasts sends Baszler running up the ramp and into the back. She isn’t safe there, as the lights are flickering and sets pieces are crashing to the ground. All the doors are locked, as Shayna runs through the bowels of the Yuengling Center. Shayna decides to barricade herself in an office. The lights flicker and Baszler sees Lilly in the mirror. When she turns around it’s gone, but the reflection is still there. DUN DUN DUUUUUUN! Baszler shatters the mirror and screams as the show goes to black.

See you next week in the ThunderDome!

When the highlight of the show is Drew McIntyre cleaving a table in half with a sword, something is very wrong. Not only was Monday Night RAW bad tonight; it was boring and that is an unforgivable sin. If the rest of the show was entertaining, I could get on board with the Bliss-Baszler angle, but with a show so bad it comes off as dumb and cheesey.