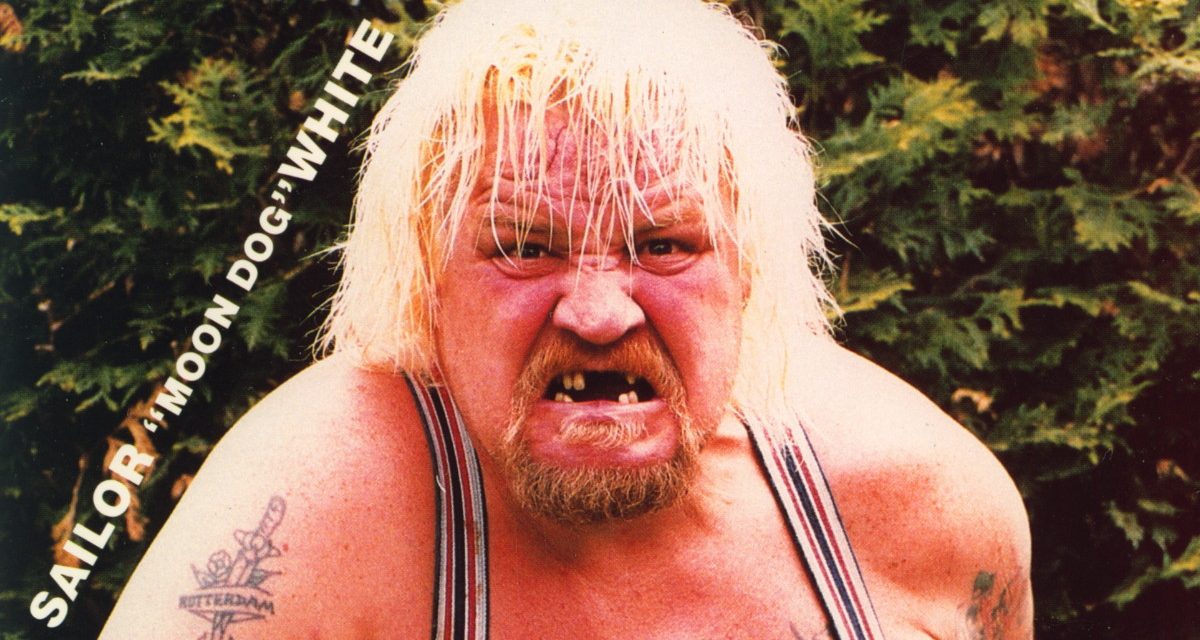 The Sailor White story is one of triumph and destruction. 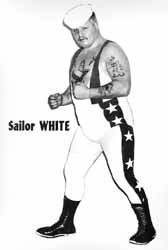 An early version of Sailor White, above, and a later version. Photos courtesy Paul LeDuc.

Wrestling fans will remember the tattooed White as a terrible rule-breaker, a madman able to enrage a crowd, bleeding profusely. He was a huge star from Montreal to the Maritimes, headlined South Africa as Big John Strongbo, and was WWF tag team champ as Moondog King (along with Moondog Rex, Randy Colley).

But on the flip-side was a man bent on self-destruction. Addicted to booze, drugs and sex, his wrestling success only fed his desires.

Edward John White was born in a poor neighbourhood in St. John’s, Newfoundland. He was a closet wrestling fan, having to hide his secret joy from his alcoholic and moody father.

He grew into a big young man and had a few run-ins with the law while still in his teens. Among many odd jobs for White was working on ships, both in Newfoundland and in Montreal.

Eventually, he found his way into the wrestling world, and had his first match May 22, 1972 in Pembroke, Ontario under promoter Larry Kasabowski.

The 1994 book, Sailor White by Dave Elliott, explained why White chose the name he did: 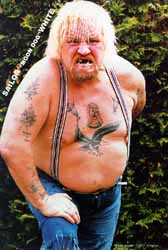 He chose the name Sailor White for several reasons. First, his last name was White, which, according to Ed, helps make it easy to remember. Second is his relation to the sea and his sailing as an actual sailor. Third, thoughts of seafaring men conjure up images of romanticism, bravery, hardness and endurance. Finally, and equally as important, the name gave him, in his own mind at least, an association with his Newfoundland roots, something which had always stuck with him. Paradoxically, it it his fondness for the island that later made him regret developing the kind of character he did — that of a scoundrel and a reprobate. He feels a lot of people may have painted many Newfoundlanders with the same brush they painted him.

From Kasabowski’s eastern Ontario promotion, White headed west to Vancouver. There, he tutored under Gene Kiniski and he learned the ropes.

But it was in the summer of 1973 in Montreal and shortly thereafter in Japan that Sailor White found his character, and became a star. A stint headlining in South Africa only re-inforced it.

He toured the world, but his vices kept eating away at him.

In 1981, he peaked as Moondog King, one half of the Moondogs with Moondog Rex (Randy Colley) and manager Captain Lou Albano. The Moondogs defeated Rick Martel and Tony Garea for the WWF tag titles on March 17. However, the success was not to last for White. After returning home to Montreal, he was denied re-entry to the U.S. for his previous convictions.

His world would never be the same.

Various odd jobs, and occasional wrestling tours weren’t enough. Over the next number of years, the alcohol and drug abuse destroyed his life and his marriage. White spent time in prison for drugs, pimping, uttering death threats, assault and break and enter.

Eventually, he realized that things had to change, and got the help he needed. At the Waterloo Treatment Centre near Montreal, he kicked his drug and alcohol habits.

Sailor White’s star burned bright for a while in the wrestling world, but today he has little to show for it. Except his scars and his memories.

When I was a teenager in the seventies I first saw Sailor White on G. Cannon’s shoe Superstars of Wrestling and I thought he was the best bad guy I had ever seen!White literally terrorized his opponents into submission,he was the ultimate kicker and stomper on the show showing no mercy! One of my favourite moves was when he would put a chin lock on his hapless victim then cover the guy’s mouth with his huge hands. I remember one of his favourite targets was Luis Martinez (who I couldn’t stand!) Sailor also really got under the skin of my mother which made him an even bigger attraction! I was really happy to see some time later that he had won the WWF tag belts -the rest of the world finally had to recognize his greatness.My one regret is never seeing him live,but i’m glad somebody has written a book about him,one that i’m sure to buy! i also remember him saying Mr Cannon and i use the term very loosely!I also delighted in the fact that Cannon’s co-host Milt Avruskin seemed to be scared to death of the big Sailor.
Brad Moore

I have a great memory of Sailor White. Back in 1997, he and Sailor White Jr. (Bill Skullion) were working an ICW show in Guelph Ontario against The Bushwackers, Sailor White bladed right infront of my friend and I(we were front row) and I got a whole wack of the blood on my ICW Program. I still have it, still stained. After the show, we got a picture with Sailor White while holding up the bloody program.
Ryan May

It’s funny how a match that most people would find insignificant would hold importance to me for many years. While living in Montreal as a kid, I was watching channel 7 from Sherbrooke one Sunday morning, and saw this bout between Sailor White and Gino Brito. I was utterly fascinated by this match mainly because it was a good match going back and forth for several minutes with leg locks, armbars, and other great moves exchanged. Back and forth the match went. It had strength, wrestling, and something I think is missing from wrestling today. Suspense. I didn’t care who one the match. It was that good. They were both giving their all.
Another reason I enjoyed the match was because at that point in time, I came to realize how good a wrestler Sailor White was. He was tough, brash, and could handle himself in the ring quite well. This was back in the ’70’s when wrestling in the province of Quebec was really exciting. I long for those days, and I am happy to say that Sailor White was a part of that history when I was young, and for that I will be eternally grateful.
Thanks Sailor for your match with Gino, that Sunday morning so long ago. If it weren’t for this match, I don’t think I would have gone on to pursue a life long interest in Pro Wrestling. Moments in time, moments in time…That’s what life is all about.
Randy McElligott

Growing up, I was told of a distant relative, who was a pro wrestler. All I knew about him was that his name was SailorWhite.
Thanks for filling in the whole story.
Cynthia in Ottawa

Right now in Newfoundland Sailor White is training wrestlers and I believe part owner of the NF-based Cutting Edge Wrestling. He has trained many of their current wrestlers. I read this in an article of a Newfoundland based magazine The Downhomer.
Lloyd Rose