Wrestling fans were no doubt beside themselves when they heard Bret Hart returned to the ring on Sunday, attacking Bill Goldberg during his match with Sting at WCW’s Slamboree PPV from St. Louis. After all, the Excellence of Execution was out of action for a month and a half, keeping wrestling-starved fans in the dark about when he would return.

So, did it feel good getting back into the ring and butting heads again, Bret?

“No, not really,” Hart told SLAM! Wrestling in a phone interview. “I think it’s a little early for me to be physically doing much.” 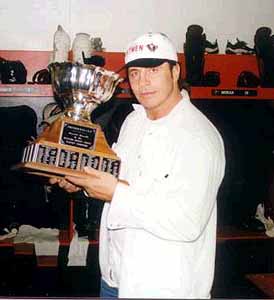 Hart, still a little banged up from years of abuse in the ring, was asked by management to show up and do the run-in. Hart, putting the company’s well-being before his own, flew to St. Louis and did the angle. It was a decision that was not an easy one for him to make.

“I was caught between this moral struggle of trying to do the right thing,” confided Hart. “I was trying to be a team guy, trying to give WCW the best I can while at the same time not allow myself to be herded into a corner like a circus animal and forced to jump through hoops like I’ve done for years and years.”

WCW didn’t exactly give Hart much choice in the matter.

“They weren’t very friendly about it, or tactful or respectful at all,” said Hart. “WCW doesn’t have good communications with its performers. I’m not that pleased with their attitude the last couple of weeks.”

Compounding Hart’s hesitations to make a return were WCW’s lack of long range plans for him.

“I feel more and more I’m at a crossroads,” admitted Hart. “I want to be more important and more involved. I never feel like I’m sailing along in this company. Instead, I feel like I’m always waiting in line.”

Hart also feels he isn’t the only valuable piece of talent that WCW isn’t using properly.

“I don’t think there’s any doubt in my mind that WCW has more talent stacked up to the WWF,” stated Hart “but they don’t know what to do with it.”

After orchestrating his ‘I Quit’ angle at Nitro from Toronto in March, arguably the best angle in WCW thus far in 1999, Hart sat at home, resting and recuperating from several nagging injuries. Even with the time off, Hart still isn’t 100 per cent.

“It’s something you have to take your time with,” said Hart. “It’s one of those things where people see you walking around and they just assume you’re not hurt when you really are.”

Resting at his home in Calgary, Hart took it easy during his time off.

“I had to be in a seated position for quite a bit of it,” said Hart. “So I watched TV. I watched a lot of hockey.”

As for wrestling, Hart admits he didn’t watch any while on break.

“I never really watched any wrestling,” admitted Hart. “I had a hard time watching it. It just wasn’t stimulating enough for me.”