Terry Funk shares his thoughts on then and now

Terry Funk is a legend in the sport of professional wrestling. The second-generation grappler saw the greats of the mat game come through his father’s Amarillo, Texas, promotion and faced them in the ring. SLAM! Wrestling was lucky enough to sit down with Terry Funk and get his opinions on the stars of the past and his thoughts on the current crop of wrestlers.

In 1986 Funk appeared at WrestleMania II alongside his brother Dory Funk Jr. to take on Tito Santana and the Junkyard Dog in Los Angeles, which was the final hour of the multi-city extravaganza. The event was headlined by Hulk Hogan taking on King Kong Bundy in a steel cage. With celebrities in attendance and future Governor of Minnesota Jesse Ventura announcing alongside actress Elvira, WrestleMania was truly an epic event. 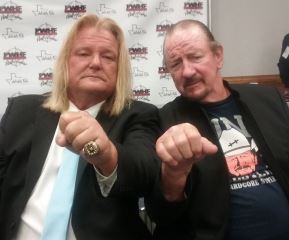 Greg “The Hammer” Valentine and Terry Funk at the Professional Wrestling Hall of Fame induction ceremony in May 2016, when Valentine was inducted. Photo by Carmine DeSpirito

When asked his thoughts about the spectacle Funk just about spat out his answer. “I’ve wrestled on as big of events in Japan, national television, 20,000 to 30,000 people sell outs time after time after time,” said Funk. “I’ve wrestled in Germany to sellouts and everything. It did not impress me, WrestleMania.”

Working with his brother was special, but so is any opponent or partner. “I think that I care about every wrestler who steps through the ropes,” said Funk. “That’s the truth and that goes from the sorry ass to the best. I wanna go ahead and produce the best product that I can with each and every one of them.”

Fast-forwarding to today, Funk is complimentary about the current crop of WWE wrestlers. “The talent, they have impressed me, the product never really ever impressed me,” said Funk. “I’m telling you the talent is great, the greatest in the world today, but I am not impressed by their manipulation.”

What is the problem if the talent is so good? “Booking, of course, creativeness,” said Funk. “I think the talent is the most wonderful in the world, I think the manipulation of that talent sucks. Writers, fire the sons of a bitches.”

Funk felt that the WWE championships and the talent that carries the titles are great. “The championship, I don’t think it is devalued,” said Funk. “It is their championship and it is the best there is. It is the closest to being a world’s champion that you can be. They are controlling more area than anybody and drawing more money.”

As for Funk’s own pocketbook, he insisted in a separate interview with Sports Illustrated that a payday is not the reason he’s returning to the ring in September for two shows: Friday, September 22 at the Dorton Arena in Raeleigh, North Carolina; and Saturday, September 23 at the Spartanburg Memorial Auditorium in Spartanburg, South Carolina. Both nights have Funk teaming with the Rock ‘n’ Roll Express — “Rock, Funk and Roll” — against Doug Gilbert, Jerry Lawler and Lawler’s son Brian Christopher. “I’m back doing what I love,” the 73-year-old Funk told Justin Barasso.

Terry Funk was one of the greatest NWA champions when that title was the pinnacle of the wrestling industry. He met and/or competed with the men who would be the standard bearers of wrestling from the 1940s to the 1990s. Here are his thoughts on those giants of the ring:

BUDDY ROGERS was a huge draw across North America and held the NWA title from 1961 to 1963. His loss of the NWA title created the controversy needed to conceive the WWWF championship. “He sucks,” said Funk. “Buddy Rogers, because he took advantage of the underneath guys constantly. He would put them in the giant swing and let them go and say he slipped and terribly injure them.”

LOU THESZ held the NWA championship for over 3,000 days. He was often considered by sportswriters to be the real deal, a classy champion. “Tremendous champion, tremendous athlete, he was a great champion that’s for sure,” recalled Funk. “He was a wrestling champion, he wrestled in the ring which was great.”

Before there was Kurt Angle there was Olympic wrestler DICK HUTTON gracing the rings of the 1950s and ’60s. He held the title for over a year before losing it to Pat O’Connor. “Dick Hutton lacked a little bit of colour,” said Funk. “He was a good champion because of his background as an amateur.”

Throughout the 1970s Terry and Dory Funk faced off against the handsome former NCAA wrestling champ JACK BRISCO who went on to hold the world title for the better part of three years. “Probably [one of] the greatest babyfaces ever if not the greatest. He was a great in-ring performer,” said Funk.

No list of NWA champions would be complete without Funk’s brother Dory included. At 1,563 days on top, DORY FUNK JR. was renowned for his scientific style in the ring. “He could go in there and have a match with a damn garbage can if necessary,” said Funk. “He was a great champion and did a great job with the championship. That was what he was made for.”

HARLEY RACE was synonymous with toughness. The eight-time champion was a hard impact worker in the ring and respected by the fans and peers. “Great in-ring performer who gave his body every night,” stated Funk. “The son of a gun it takes a toll on your body for all of us but he really excelled in the ring as a performer. I don’t think there is a person out there who would say that Harley didn’t give them 100% and their monies worth.”

RONNIE GARVIN is a little remembered NWA champion of the late 1980s. His surprise win over Ric Flair was seen as a triumph for the working man. “Ronnie Garvin was a great in-ring performer and he and his in-ring brothers (Jimmy and Terry) were a great tag team,” said Funk. “They travelled the country and drew money everywhere.”

The man many wrestling fans think of as the champion is the flamboyant RIC FLAIR. Terry Funk engaged in a series of highly controversial and physical matches with Flair over the title in WCW. “Very good in-ring performer,” said Funk. “A totally different style, a lot of pizzazz. Flair could wrestle too.”

Funk is many years removed from his own NWA world title run and is enjoying life in Texas. Just about his biggest opponent now is the length of his grass. “My life is wonderful now,” said Funk happily. “Hell, I mow the lawn for fun. Just love life I really do. I love my life, love my wife, love my family. It is just wonderful seeing them every day.”