Well, at least the wrestler won.

In the 30 minute blow-off to the first ever (and perhaps last ever) Mae Young Classic, Kairi Sane defeated mixed martial artist Shayna Baszler to claim the gigantic ice sculpture that is the tournament trophy.

Don’t feel too bad for Sane though. Not only did she get to lug that monstrosity home but she will compete for the vacant NXT Women’s Championship at NXT Takeover: Houston.

Why though was the Mae Young Classic finale only given 30 minutes to wrap things up when the Cruiserweight Classic’s finale last year was two hours long? Only The Genius has the answer to that one.

Sane and Baszler wrestled a pretty unremarkable 15-minute match although it was better than many of the really weak matches that dominated the first half of the tournament.

At the start of the match, Baszler dumbfounded Sane with her strength and her takedowns. Baszler almost pinned herself when she applied an arm bar and a headlock to Sane.

Baszler abandoned the take-downs opting for a test of strength. Baszler bent Sane in half and then proceeded to kick and batter her. Sane countered with a hurricanrana off the ropes but Baszler sat up Brock Lesnar style and kicked Sane right out of the ring.

A wobbly Sane was clipped with a running kick from Baszler who then threw Sane back into the ring for a two count.

Sane missed some sort of awkward dive or spear so Baszler worked on her arm. Sane tried another spear and Baszler caught her and gave her two German suplexes.

An angry Sane chopped Baszler into the ropes before catching a running knee to the chest which took her down to her knees. Sane finally caught Baszler with her spear for a two count.

A drop kick and a double stomp to the ribs hurt Baszler as did a scissor lock from Sane. The “injury” to the ribs would be played up for the rest of the match such as when Baszler would try to suplex Sane later on.

After an axe kick, Sane would attempt to hit her Insane Elbow but Baszler would lock her in her rear-naked sleeper, her trademark finisher in the tournament. Sane would break free and try her luck again on the top rope. Sane and Baszler would battle on the second rope. Hung up on the Tree of Woe, a double stomp and then an Insane Elbow a few minutes later would put Baszler away.

NXT TakeOver: Houston will take place on November 18 at the Amway Center in Houston, Texas, the night before Survivor Series. 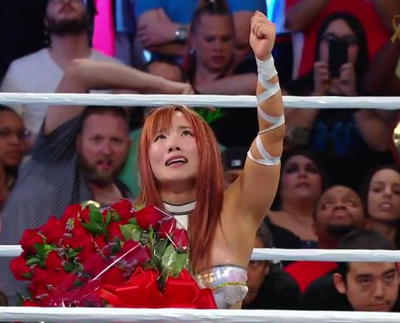