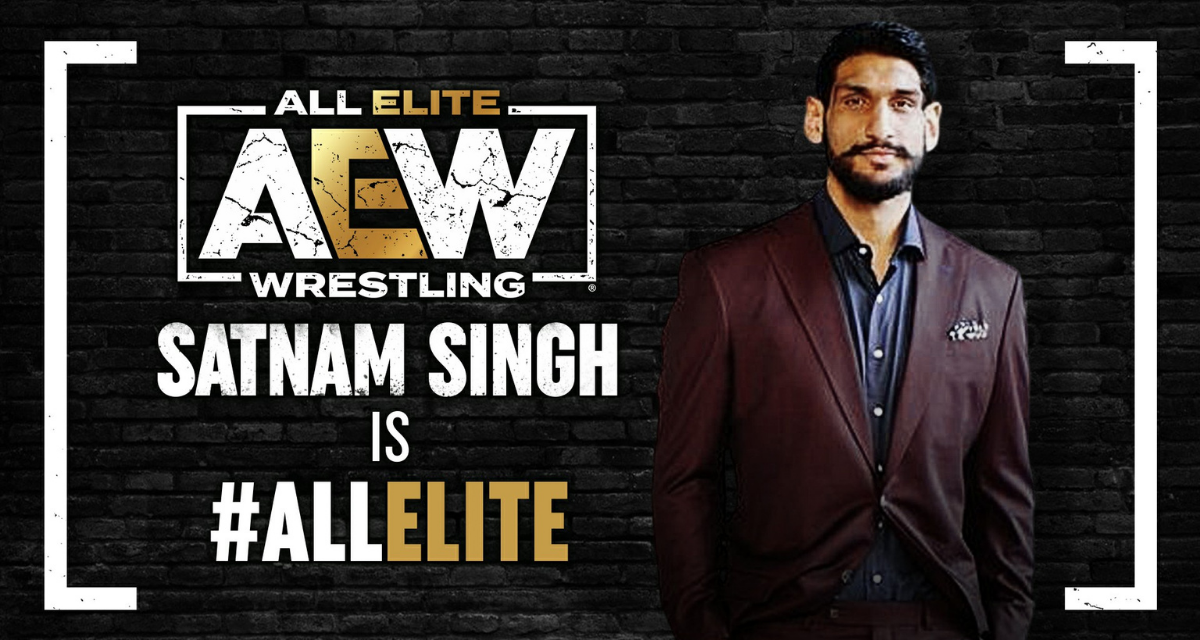 AEW’s press release today was a bit of a dud.

The news on September 23 is that AEW has signed failed National Basketball Association (NBA) player Satnam Singh. The 7-foot-3 monster was the first-ever played drafted by the NBA out of India, and that was in 2015 by the Dallas Mavericks, going 52nd overall. The Mavs, who have had a lot of success with international players in recent years, took a bit of a flyer on the unknown giant in the draft, and, there’s no other way to put it — it didn’t pan out.

He never made it out of the developmental G League. Prior to the draft, Singh never played in the NCAA either, since he was neither an American citizen nor could he speak English at the time. Really, he was a IMG Academy product, after emerging from the NBA-sponsored Basketball Without Borders program.

About the best thing that can be said about his playing days is that it resulted in a Netflix documentary, One in a Billion.

But hey, there was a lot of hype after the draft. “It feels good to be compared to Yao Ming,” Satnam Singh Bhamar said in an Associated Press piece after the draft, referencing China’s NBA Hall of Famer.

“The NBA officials I have met have also praised me and see a great prospect in me,” Singh said. “I am going to give it everything.”

So, Singh is now, apparently, a pro wrestler.

“While we’ve recently secured some of the hottest free agents on the planet, I’m also deeply committed to cultivating our own homegrown stars and the next generation of extraordinary professional wrestlers,” said AEW’s Tony Khan in the press release. “In addition to Satnam’s commanding 7’3″ stature, I was impressed with his high level of athleticism and charisma. He’s an exciting addition to our roster, and I’m looking forward to our fans getting to know Satnam’s personality and watching his development.”

The release notes that AEW recently had Shaquille O’Neal in the ring … but leaves out the real comparison to “El Gigante” Jorge González, the Argentinian basketball import who — see the trend? — never made a dent in the NBA either, and was signed by World Championship Wrestling with a lot of hoopla by its ultimate owner Ted Turner.

No mention was made of NBA Hall of Famers Dennis Rodman, who actually was pretty good and entertaining when he was in the ring, or “Mailman” Karl Malone, who was great for his one and done appearance.

In that Associated Press story, the author sought out a comment from Harish Sharma, who was secretary of India’s basketball federation. His quote is just as valid to why AEW would announce the signing of Singh.

“One star player like this in NBA could mean a big boost for the game in India,” said Sharma, himself a former India National basketball team player.

Buried further down in the AEW press release was the nut of why Singh matters: Dynamite and Rampage are now airing on Eurosport India.

The desire to succeed in the Indian market of a billion people is why TNA did its Ring Ka King excursion to India, and why The Great Khali was pushed on WWE TV.

AEW’s announcement today — premature and, quite frankly ridiculous if Singh hasn’t already been training at its affiliated Nightmare Factory for at least two months already — is an odd misstep for a company riding so much momentum.