Rey Mysterio’s CAC speech: ‘This journey has been incredible’ On September 15, 2021, Rey Mysterio was presented with the Cauliflower Alley Club’s Lucha Libre Award. Here’s the transcript of what he said, as well as the words of the evening’s emcee, John Arezzi, and his presenter, Sam Adonis.

JOHN AREZZI: I was involved with a group that brought AAA here and, and I just saw the extraordinary talent. And I had never seen anything like it, ever, and to this day, it resonates. And we got to do some pretty cool things together. Not just in Los Angeles, but I was the guy that was trying to connect — as a Madusa always calls me The Connector — to connect Paul Heyman with Konnan to bring you and Psicosis into ECW Arena. And you know how hard that was, to try to get them on the phone together? You know those guys! So anyway, it worked out fine. I was even picked you up at the airport with Psicosis, bought into the ECW Arena. They were cheering the heck out of you guys as soon as you arrived. For me, they were just chanting out, “You Fat F***.” If you know the ECW Arena, that’s what happened to me that night. 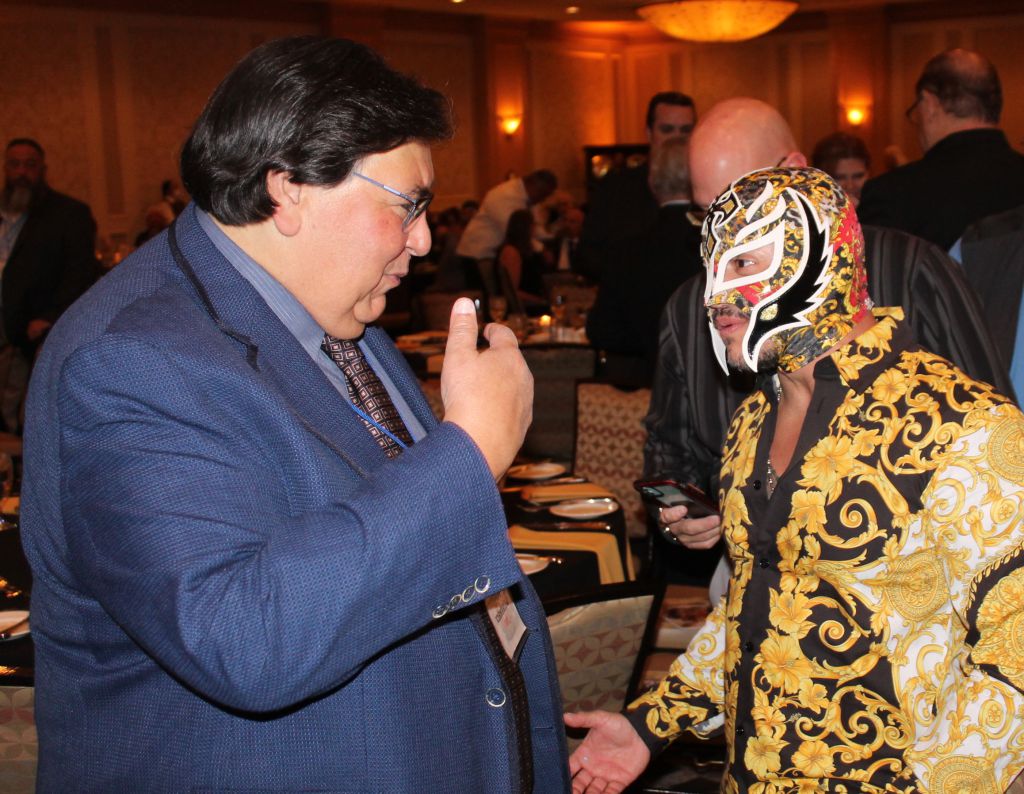 But a couple of things that we did were really special. I mean, Caracas, Venezuela. We went, it was July of 1995, and I teamed you up with Konnan against Sabu and Psicosis. You tore the house down. Then later, October 21, 1995, Chicago Amphitheater, we had a spectacular show there. That’s when Terry Funk turned on Perro Aguayo, and hung him. Almost no one left the building alive. But that night, I teamed you up with Winner’s and Súper Caló against Psicosis, Sabu and Cactus Jack. So what a night that was.

But anyway, for me to be in your presence, as much as I revere and respect you, it’s a special night for me. We are going to pay honor to Rey Mysterio Jr. We’re going to have a video presentation. And then we’re gonna bring up somebody who was just burning the house down right now, the hottest heel in Mexico from AAA.

Its hard to put into words how much it meant to me to present @reymysterio with the 2021 @caulifloweralleyclub “Lucha Libre” Award!

Rey has been someone I’ve looked up to since I was 6 years old. Presenting him with this award is a memory that I will remember forever!! pic.twitter.com/4dO0Gw53q9

For those of you that don’t speak Spanish, my name is Sam Adonis. I really shouldn’t be up here tonight. There’s a thousand other people in this room that are more deserving to be on this podium than I am. And there’s really not a lot much more than I can say than Mr. Arezzi. So thank you for this honor and privilege to be up here to present this award to such a huge superstar.

I’m just a kid from Pittsburgh, Pennsylvania, and I came from a little bit of a wrestling family. My dad was an independent promoter. My brother was a wrestler and just the whole family is consumed by pro wrestling. And instead of hearing “Rockabye Baby” before bedtime, my dad used to tell us stories about the legends of the past. We’d hear about Spiros Arion, Bruno Sammartino, Dominic Denucci, all these superstars.

But one in particular, my dad always talked about, and it was like hearing stories of Superman. It was Mil Mascaras. Mil Mascaras had the coolest look I had ever seen as a child. But I could only really see him in the magazines, or in some pictures around the house, some old posters that my dad had from his collection. That was basically all I knew about lucha libre in Mexico.

But that all changed on November 6, 1994, thanks to Mr. John Arezzi. AAA presented When Worlds Collide in the Los Angeles Sports Arena and brought lucha libre to the United States. It was the first time anybody was able to see how amazing the fast-paced, high-flying, colorful style of lucha libre was on such a grand scale. [Editor’s Note: Arezzi was not involved with When Worlds Collide.]

That was until ECW and WCW in the mid ’90s. And thanks to them, thanks to Eric Bischoff, Paul Heyman, and a lot of people, we were able to see some of the greatest superstars in the lucha libre history — Eddie Guerrero, La Parka. Súper Caló, Silver King, El Dandy, all these superstars, so much talent under one roof on a consistent basis.

Rey Mysterio had a style and charisma and a class that was unmatched by any luchador. He would go on to become one of the most recognizable masks of all time. He also went on to become a WWE Champion. 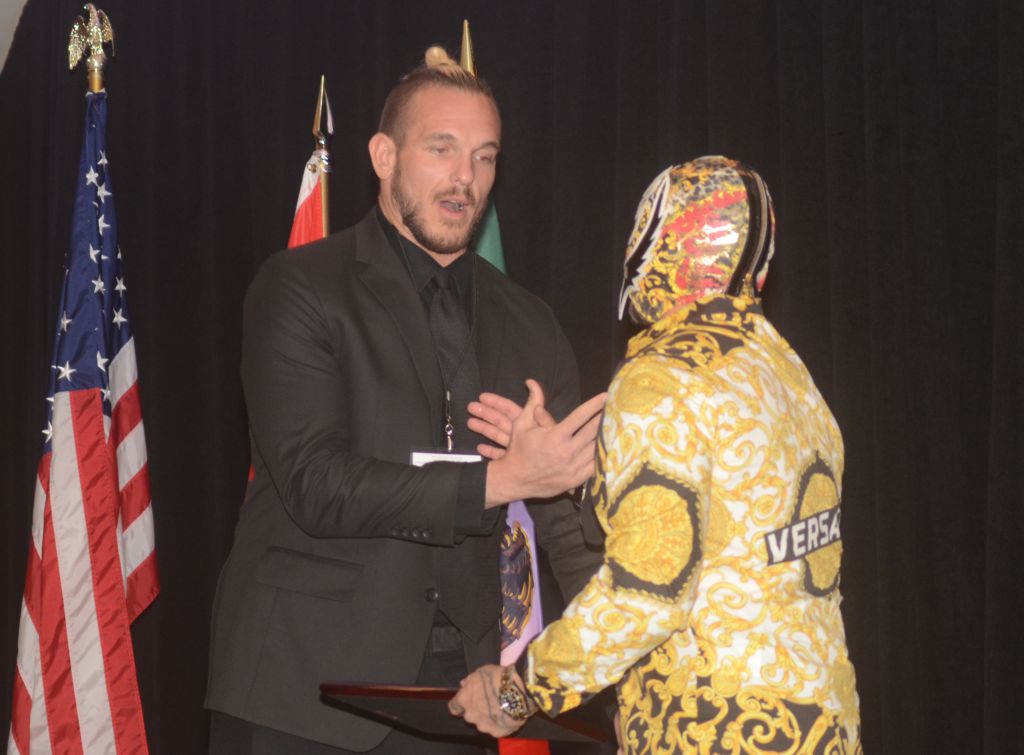 REY MYSTERIO: How you guys doing? Having a good time?

I didn’t know this [Cauliflower Alley Club] was around 55 years, you know. I would have been here at the age of one if I could have.

Man, I am truly blessed. First and foremost, I want to thank God for this journey that He has given me — incredible. Bless.

God, I have so many words that I can describe the 32 years that I’ve been doing professional wrestling. I’m going to tell a quick little story on how it all started for me at the age of eight. I decided to start wrestling training with my uncle in Tijuana, just a kid from San Diego that was raised in Tijuana, to Mexican parents. I started training at the age of eight to the age of 14. At the age of 14, I get my first opportunity to wrestle in front of 100 people, inside of a church — outside a church, I’m sorry, a parking lot. So that was my first experience as a wrestler.

Just my passion, my dream, my work ethic, always was wrestling and that was taught from my uncle to me. My uncle was first generation, I’m second generation. Now my son is continuing with the third generation.

But at the age of 14, 15, 16, John maybe you were booking some shows at the time. I remember my first official out of town matches were in LA and I was wrestling at bars when I was only 15 years old. So they would tell me, “Rey, sneak in through the back. You don’t take your mask off. You leave it on, because it’s only 18 and up.” At that time, at the age of 15, imagine wrestling Mando Guerrero at that age. John, did you ever put any of those?

MYSTERIO: Okay. So right before ’93 I was wrestling Mando. Now, if you would have told me back then, “One day, you’re going to be teaming up with Eddie Guerrero, and you’re going to meet some of the best tag team luchadors of all time,” I would have never thought it.

It’s funny how God has a path and a destiny for you. And you just have to fulfill it. You have to put in the work. And I believe for 32 years I have been doing that. So I thank God first and foremost, my family, my beautiful wife that has been with me from the very first match I had up until the last one.

Those were good times.

And the match we had last night was pretty good too. 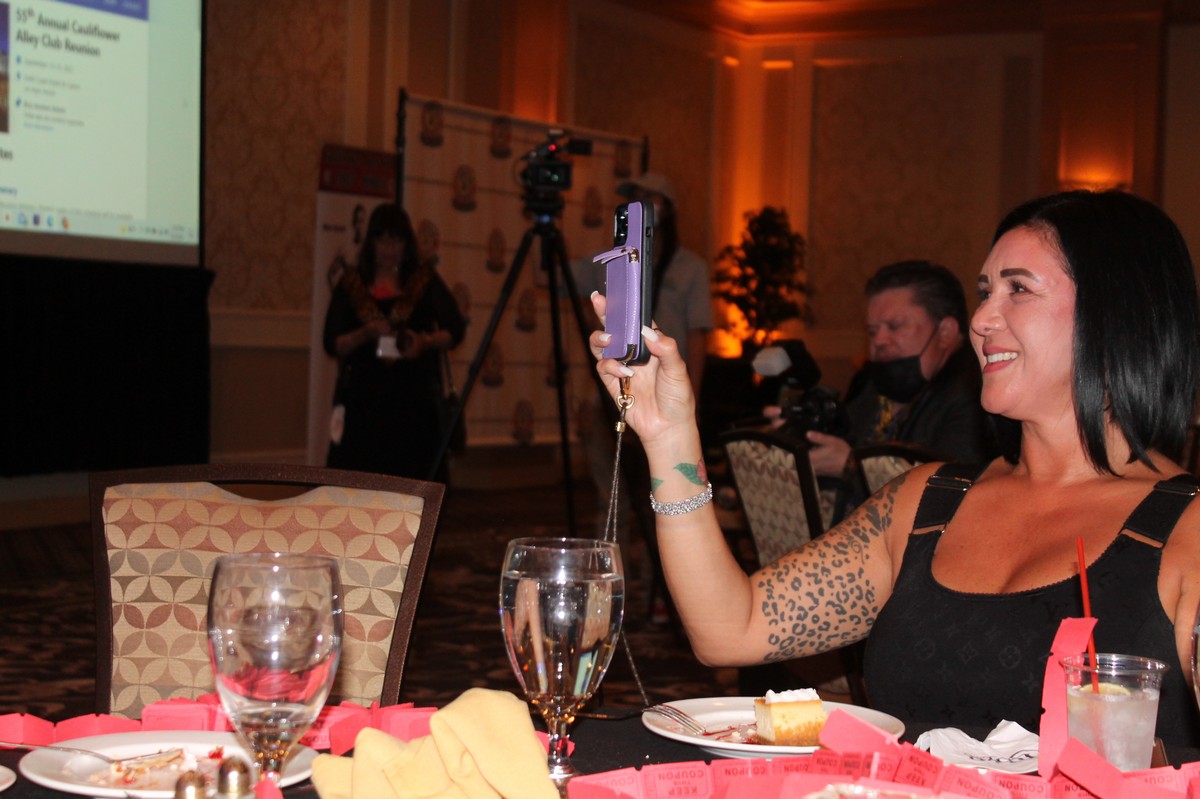 Yeah, this journey has been incredible. My parents were putting up with me as well, my brothers for the support.

I think the ones that are very important to me, the ones that paved the road for wrestlers like myself, and the generation that’s coming right after me, like my son, thank you to those that have made the sacrifices, that have been on the road, that have not been at home for anniversaries, Christmases, birthdays, which are very important. So on behalf of myself, my wife, my family, my kids, thank you guys very much. CAC, thank you very much for giving me this opportunity to be up here, to enjoy this moment with all of you.

I know for the past year we’ve been on lockdown, and we haven’t had that much of a freedom. We’ve been really locked up. So this feels good to be out.

Kevin Sullivan, where are you at? Big, big influence in my career. Because from ECW, we were eyeballed right away from WCW. And they wanted us in there, we right behind Eddie, Benoit, Malenko and Jericho. And you were the one that opened up the doors for Psicosis, for Konnan, for myself. I know Konnan had those words with you, and because of the relationship, you opened up the doors to WCW — without that, Rey Mysterio would not be part of the WCW, which is where my career really kicked off. Then after that, it really took off in WWE, but thank you.

There’s a lot of people that that I’m probably forgetting but Kevin, I know you’re here and I really appreciate you having the trust, and letting us just take off and ride into the sunset, man, like we always did. Thank you so much for that opportunity.

And I think the ones that we tend to forget at times, but without the fans, we would not be who we are. That’s what I’ve always said. I’ve always made the time and pushed other things aside, to spend time with my fans, whether I get recognized or, they spot me out, whatever the case might be.

If they recognized Rey Mysterio, I’d like to attend to them, autograph a picture, whatever. Sometimes they’re too scared to ask for a picture, and I’ll tell them, “Hey, let’s take a picture together.” “Really?” So those moments are very special to me. I would not be here without the support and the love of the fans.

VOICE IN CROWD: So we love you, brother.

MYSTERIO: Thank you very much. I love you too.

One thing that I tell my son all the time, and I have been doing it ever since he broke into this business — Keep your feet on the ground, man. Stay humble. We’re always blessed.

So thank you again, very much. Love you guys very much.