Covey Christ brings the ‘devil’ to the ring 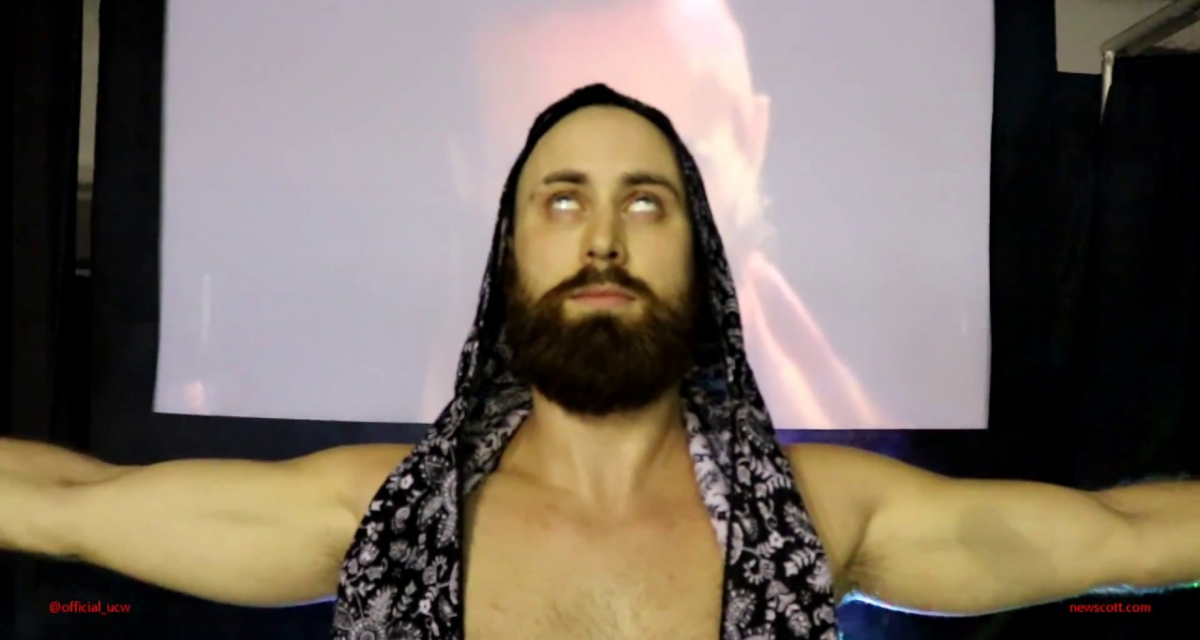 Covey Christ is one of pro wrestling’s most interesting characters, both in and out of the ring. He is as complex as any man out there in the world of professional wrestling. As Covey Christ, he’s as tough as nails and originally modelled in the image of a “Satan incarnate.” Despite this sense of spiritual guidance being the second coming of the devil, Christ has shown that he is, in fact, vulnerable in human form when he steps in the ring.

More recently, Christ has been transitioning his wrestling character to implement a little more of who he is as a human being. Covey Steele, the person, is really an intelligent man who loves his own fair share of nerdy stuff. Of course, pro wrestling is up there, but Steele is also a student, writer, sports fan, and loving boyfriend to his partner Samantha. When he’s not wrestling, Steele keeps to himself and his small circle… away from the bright lights of the wrestling scene. 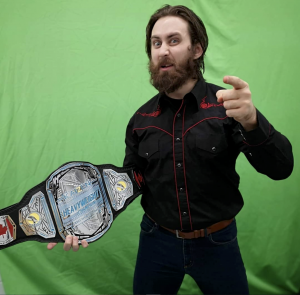 Steele began his journey in 2001, wrestling for a very small independent promotion in the Maritimes.

“I had my first match on April 21, 2001, on Cape Breton Island, when I was 15. I wrestled for a few years on the Maritimes before I went away to an actual wrestling school,” Steele said. “I did like 50 shows for that small promotion, but we were far from well trained. Trained by a guy who was trained by a guy who was trained by another guy. Then, I went to Can-Am when I was 18. I spent three years there with Scott D’Amore, Johnny Devine, Tyson Dux, Alex Shelley, Petey Williams, Crimson, Chris Sabin, Joe Doering… it was a who’s-who of wrestlers coming out of that school.”

“Covey was a great student! A true wrestle sponge I call them, soaking up any and every bit of knowledge and information he can use to better himself,” said Johnny Devine, one of Steele’s earliest trainers back at Can-Am. “And look how successful he has been. I look forward to what the future brings him. He has my full confidence and support.”

At that time, Steele was still trying to find himself as a wrestler, being such a young teen and yet to establish a real physique for the wrestling ring.

“I was this 18-year-old, 110 pound kid (chuckles). But man, I was like the happiest kid in the world,” Steele said. “Scott D’Amore, I love him to death, such a great dude. He would always say when I came into the school, (in a Scott D’Amore-esque impersonation), ‘Kid, what am I supposed to do with you? How do I make any money off of you? I put you out there, you’re 110 pounds, you look like the kid that drops off my papers at home. You look like my paper boy! That’s the only gimmick I could ever give to you.””

D’Amore would christen Steele with the paper boy name for the three years he spent at Can-Am Wrestling School. His original character coming up was proposed to be a “festival kid” named KC Covey, but Steele knew this wasn’t him. He was still in character purgatory until he was inspired by the biblical story of Job.

“Basically the story of Job explains how Satan became Satan. Essentially, Covey Christ, the character, is Satan landing on Earth,” Steele said. “In his mind, he’s more powerful than the people around him… but he’s just a human. So I’m a 5’10, 175 pound man, but in my mind, I’m this 6’6, 360 pound giant that can take on anybody. I can come face to face with anybody and there’s no fear as a person. Until… they start beating the s*** outta me (chuckles). In my mind, I’m Satan. In my mind, I’m all-powerful. And they show me in a mortal body. So it allowed me to be this sort of cartoonish, over-the-top type of character.”

Like many other young wrestling fans, Steele watched the major promotions like WWF and WCW growing up, but as he grew older, he began to appreciate and admire other forms of professional wrestling.

“You would watch Raw or Nitro on TV growing up. But then, I started to find guys that would send me tapes of stuff from Japan or the U.K. and I was just astonished by what I saw. I remember getting a tape of the ECWA Super 8 tournament from 2001 with Donovan Morgan, AJ Styles, Jamie Noble, Pepper Parks! That s*** got hooked into my veins,” Steele said. “And I didn’t have internet growing up, so a few years later when one of my buddy’s mom’s got a new computer, I remember giving that thing a s***load of viruses looking up the PWI 500 for that year and seeing guys like Samoa Joe, Low-Ki, Reckless Youth, Mike Quackenbush. I had no idea who these guys were but their names were just so wacky enough that I became intrigued.”

Steele began to grow fond of the British style of wrestling in particular, in which he was able to complete multiple tours of the United Kingdom later in his career. This style also happens to be the main inspiration behind Covey Christ’s repertoire in the ring. Steele’s dedication to his craft and performance as a pro wrestler soon overtook his over-the-top character to a more hard-nosed, determined, hard-worker type of role.

“Much of the character is still the same in terms of goals and what not, but it’s not more so about me being mean to get to where I want, it’s about outworking everyone else, putting in the hours in the gym, running 10 kilometres a day… that sort of thing,” Steele said. “The fans came to sympathize with me now because I give off that message of hard work will bring you to where you want to be, it’s very relatable.”

Steele has worked in independent promotions all across Canada, however, his more recent wrestling ventures have been grounded in a promotion out of Nova Scotia called Kaizen Pro Wrestling, where he is the current Kaizen Heavyweight Champion.

“We started Kaizen two years ago… Dave Boyce who is everything to do with Kaizen… Dave is Kaizen,” Steele said. “Dave is the most important person to Maritime wrestling. There’s not a single worker more important than Dave, he’s so f****** cool! As a man outside of wrestling as well, I look up to Dave as a man too. Dave promotes everything, Dave runs everything, and we’re just lucky to be able work with him and enjoy the ride.”

Boyce is happy to talk about his champion. “As a performer, he is one of the best. He is a student of the game. He is always learning and applying that knowledge to make himself and others better,” Kaizen promoter Boyce said. “As a person, we are complete opposite, but I admire his passion and love for wrestling and his desire to not only make himself better, but others as well.”

Steele’s involvement with Kaizen extends even further now as he is not only an in-ring talent, but he also runs the Kaizen Wrestling Academy. 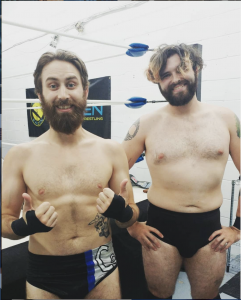 “I love going to the school and watching him teach the kids. He is patient, he is precise, and he glows when the lesson he taught is perfected,” said Boyce.

Steele feels he is filling a void. “This area doesn’t really have any vets that are willing to teach, where the feedback is sort of limited to, ‘Oh, that match was good,’ or, ‘Oh, that match was s***.’ There’s no psychology conversations, no build, no strategy on how to draw the crowd in more, that sort of thing,” Steele concluded. “No students at my gym can complain because I’m this 35-year-old man still putting in just as much crazy work.”

Covey Christ is scheduled to wrestle at Kaizen Pro Wrestling’s two events in one day show in Bedford, NS, on Saturday, August 21st at the Bedford Lions Club. It is an all-ages event. Tickets are available for purchase here