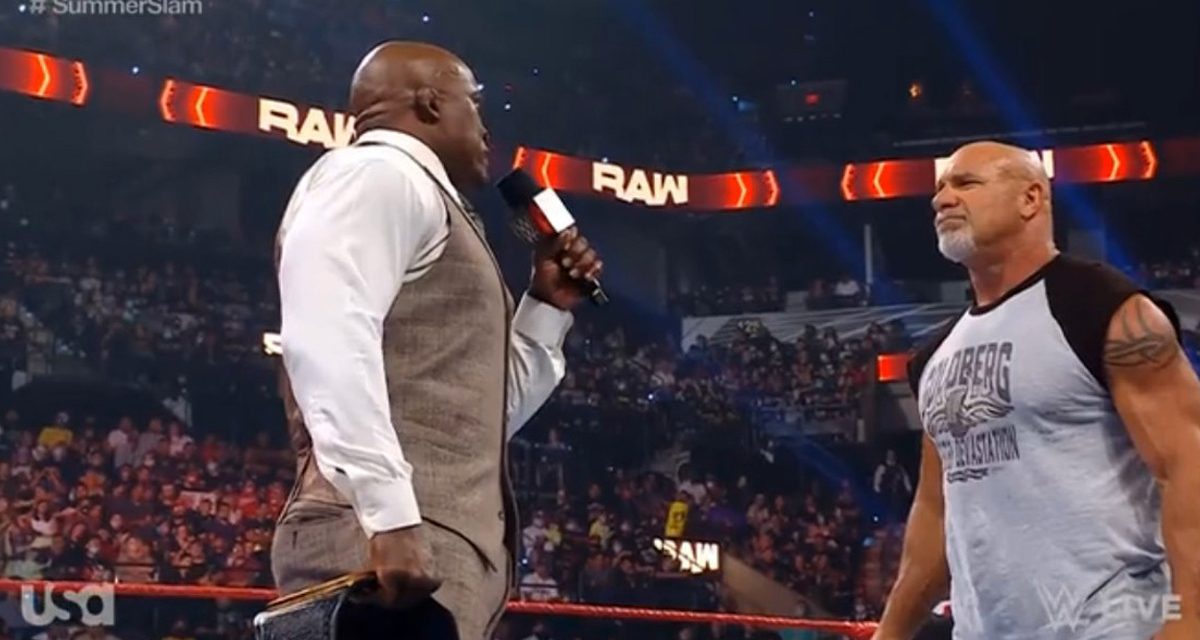 The WWE continued to be devoted friends to the environment by recycling pretty much the same matches on Raw this week as well as taking a page from last week’s Smackdown with challenger Goldberg meeting WWE Champion Bobby Lashley face-to-face in the ring. Not sure what the big deal is as they already did that.

Goldberg gets on the mike pointing to his son in the first row saying he came out of retirement for him because he want to make him proud. You know, the same stuff he spouted last time against The Fiend or what that Brock Lesnar? No matter. Lashley’s music ends this episode of Chrisley Knows Best.

Lashley isn’t shy. He gets right into Goldberg’s face.

“I gave you every opportunity to bow down and walk away to save yourself the embarrassment of what I can do to you but you are too damn stubborn and hard-headed. So, now you play by the house rules and around here the house always wins. I know you want to have this proud SummerSlam moment and I am going to give you that moment because I am going to leave you with just enough energy so you can tell all your family and friends that you had the honour of having your career finally ended by the Almighty Bobby Lashley! When you step in this ring you step into the house of the Almighty!” spit Lashley.

Lashley hauled off to punch Goldberg. Goldberg speared him instead and walked off with his son in tow as Lashley seethed in the ring.

Randy Orton and his Ringling Brothers strongman moustache and goatee come to the ring to explain why he turned on Riddle. Do we care? No, but Randy is going to drone on as he always does. Randy says he doesn’t need help, especially from someone like Riddle. “I did it all by myself. I don’t need anyone,” he says about his career not thanking Evolution, Edge, etc. Randy recognizes that Omos is a monster but he’s kind of a jackass too. He won’t back down from him tonight. He promises to give Omos an RKO. The crowd cheers. So, is Randy supposed to be the heel or face? I am very confused.

Riddle’s music plays and he rides down to the ring on his scooter.

“He is persistent, if nothing else,” says Corey Graves.

Riddle tells Randy he understands why he laid him out with an RKO. He wanted to teach him a lesson…How to do an RKO properly! Riddle wants to give their team another chance. The WWE humanioids start chanting RKBro! RKBro!

The Raw Tag Team Champions put an end to the brofest.

“How about RK-No!” laughs Styles.

Styles challenges Riddle to a match because he wants to break his jaw so he can stop saying…Bro!…every three seconds. Riddle accepts the challenge. I hope he does break Riddle’s jaw just a little so there are no Bro-this-or-that next week.

Randy walks out on Riddle. The fans boo him. Styles attacks a distracted Riddle. Riddle hits Styles with a moonsault on the floor and comes up holding his knee. Riddle uses a German Suplex to put Styles in a pinning position but the injured leg doesn’t allow him to pin Styles. The fans start chanting…This is awesome!…because apparently anything slightly above average is “awesome” to them.

Riddle barely escapes Styles’ Calf Crusher by reaching the ropes just in time. A limping Riddle climbs to the top rope for a Floating Bro. Omos saunters over towards Riddle. Styles tears Riddle off the ropes for a Styles Clash.

Riddle is interviewed backstage. He is disappointed in Randy Orton. He thinks his attitude is just “sad”. I think what he meant to say is this thick-witted angle is just “sad”. WWE? Bill and Ted called. They want their gimmick back.

Before the bell can ring Charlotte Flair comes down to the ring to lend her talents to the commentary team. She promises to “behave”. She botches things 15 seconds in by getting Byron’s name wrong. Charlotte calls her loss to Nikki weeks ago an “accident” as she literally speaks like an android. What’s up with that? Ripley beats Nikki pretty easily and quickly with a Riptide. Charlotte laughs at Nikki. Nikki lashes out at Charlotte throwing her into the ring. She and Ripley team up to beat the tar out of Charlotte. How rude!

Jinder Mahal berates his allies backstage. He instructs them to relieve Drew of his sword tonight. So, the WWE just allows superstars to carry around and threaten people with deadly weapons? Ooookay.

Drew’s rage propels him through the match even though he is fighting two giants. Drew drops Shanky with a Michinoku Driver. A Future Shock DDT KOs Veer. A Claymore pins Shanky. Drew does a mock interview with a stunned Shanky in which he apologizes and predicts that Mahal will be destroyed at SummerSlam. Drew vows he will not just beat Mahal but he will humiliate him this Saturday.

The Raw GMs entertain Charlotte’s whining about Nikki attacking her. They offer her a tag match against Nikki tonight so she can get her revenge. Charlotte: “I don’t play well with others.” I think what she meant was she doesn’t wrestle well with others.

WWE must need to chew up TV time because they replay the same Elias promo where he sets fire to his guitar and proclaims that Elias is dead. Later, he erects a tombstone in his persona’s dishonour. 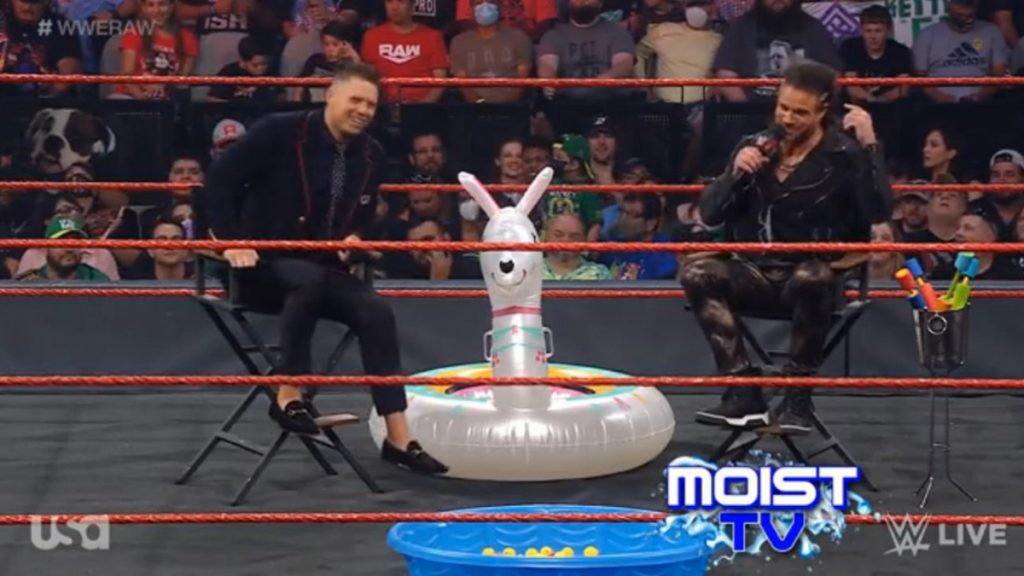 Not only can’t the WWE afford superstars anymore, they cannot afford sets either it seems. Courtesy: WWE.

The WWE has given John Morrison his own interview segment. How lucky are we? For his first guest on the premiere episode of Moist TV, Morrison will jaw with…The Miz, of course. The set is a few chairs, a floatie and a kiddie pool. Good to see the WWE spares no expense. Morrison wonders why The Miz would fake an injury all these weeks. The Miz fumbles for an excuse as he wears dress shoes with no socks which is a real douche bag move in my book. Damian Priest joins the party. He asks Miz too about faking the injury and not letting his pal know he was cleared. Morrison suggests that the Miz and Priest make Moist TV…it pains me to even write that…history by having a match. So, we get…

The Miz versus Damian Priest

It seems anyone can just come down and join the announce team just like any challenge is made into a match in the WWE these days. Sheamus puts on a headset to take in the action. Miz feigns an injury again. Priest punches him in the face. Miz and Priest exchange kicks. Miz gets the worst of things. The Miz reaches for Morrison’s drip stick. Morrison turns his back on the Miz and walks away. Priest pins Mix with a Brogue Kick. That enrages Sheamus. He tells Priest that he will kick his head off at SummerSlam.

Eva Marie tears into Doudrop for losing last week against Alexa Bliss. She demands Doudrop visit the Playground and bring Lilly back to her. Still embarrassing herself by acting like an eight-year-old on Raw every week, Bliss warns Lilly they have a special visitor coming. Doudrop snatches Lilly but thinks better of it and hands her back to Bliss. Bray Wyatt says…You’re welcome, Alexa Bliss.

Miz and Morrison bury the hatchet backstage while The New Day hold up a sign asking fans to buy their T-shirt. Yeah, that’s hilarious.

Mace could be a massive superstar in WWE. They need to take him out of the tag team ranks and push him on his own with a better persona. Mace has Mansoor beat but Mustafa Ali kicks him from outside the ring giving Mansoor the victory. Yeah, still don’t care about any of this.

Omos proclaims that he is going to be the new legend killer tonight. 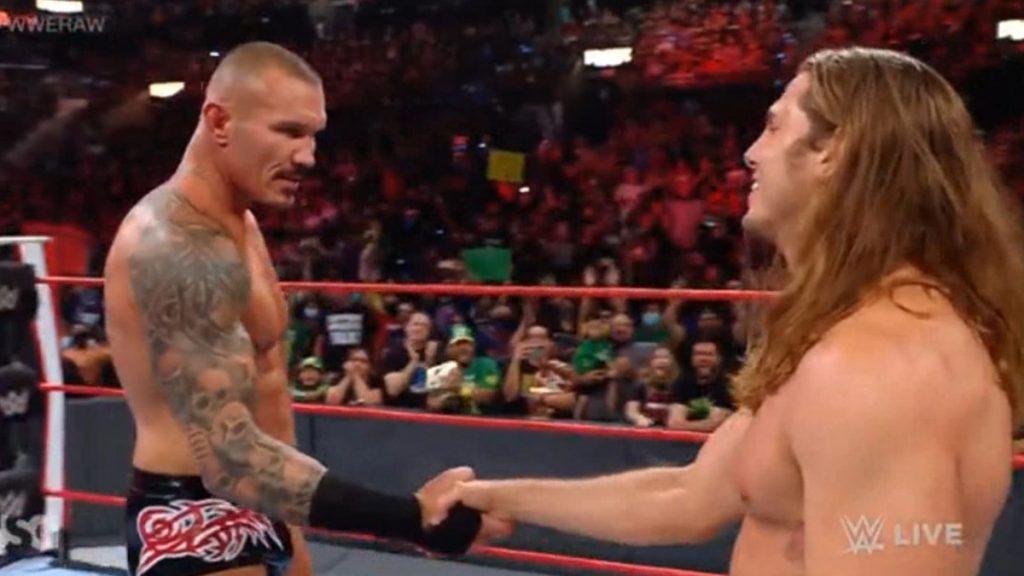 Omos tosses Orton around like a toy. Even after how Orton treated Riddle tonight the crowd chants for Orton. Boggles the mind. Orton goes for an RKO. Omos just throws him out of the ring. Styles attacks Orton on the floor. Omos is disqualified. Omos hurls Orton over a barricade. Riddle fights off Styles and drop kicks Omos. Instead of taking on Riddle, Omos attends to Styles instead. Orton has a change of heart. Riddle has gained his respect. The band is back together and they challenge Omos and Styles for the Raw Tag Team Championship at SummerSlam.

Jeff Hardy cuts a promo backstage. He says Karrion Kross’ 15 minutes of fame on Raw are up. From out of nowhere, Kross clobbers him from behind.

Hardy staggers out to the ring. Kross beats Hardy in seconds when he turns a Twist of Fate into a Kross Jacket.

Eva Marie is so disappointed with Doudrop’s failure that she slaps her across the face twice before walking away. Doudrop just stands there and takes it.

There is some nonsense I won’t dignify involving Reginald prattling on and on about his childhood in a park as R-Truth sneaks up in a camouflage suit and Tozawa is in a garbage can. What in the hell is this baby-brained stupidity? Oh, yeah. Insert the word Goldberg said earlier here.

Nikki ASH and Rhea Ripley versus Charlotte and Nia Jax

Jax mows Nikki down. She tags in Charlotte who does the same. Nikki dumps Charlotte with botched DDT. Charlotte’s head doesn’t even hit the ground. Nikki hot tags in Rhea. Shayna Baszler is watching backstage with a pack of playing cards in her hand. Nia looks to put Ripley away. Charlotte tags herself in, totally botches a Natural Selection but pins Rhea anyway.

Looking to eat up some more TV time, Styles believes that RKOBro cannot match himself and Omos. They will still be strong come Sunday whereas RKOBro will fall apart in those five days because they just don’t get along.

We have seen all of this in various forms for like the last four weeks. One week is now just bleeding into the next a far as Raw is concerned. The last hour was particularly awful with all those short matches and segments. Perhaps it was past Vince’s bedtime and he nodded off like I almost did.