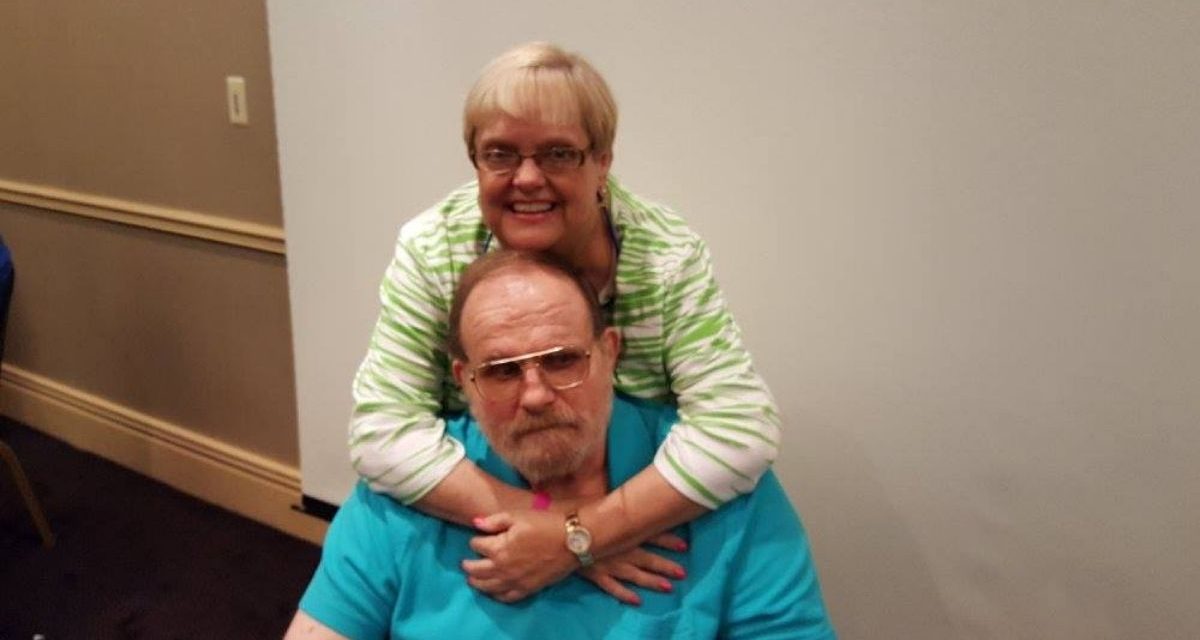 My heart is heavy. My dear friend, my ‘blue Smurf’, the ‘Queen of the Mid-Atlantic Mafia’, Peggy Lathan passed away sometime after we messaged each other last night. She had come home from the hospital yesterday to quarantine with COVID. Please pray for her dad who is a WWII veteran & is currently in ICU & unresponsive, also with COVID. I’m so glad we got to spend so much time together in Charlotte at The Gathering 2. I know you’re with your Granny, Beaut, Don Kernodle & your other friends at the matches tonight in heaven. Love you, Smurf, & am going to miss you dearly.

I found myself reflecting on Peggy, who seemed to know everybody who came through the Mid-Atlantic territory. But it was more than just being a fan — those wrestlers genuinely cared for her.

You couldn’t help but smile around Peggy. She had a joyous bounce to her step, a happy outlook. It was infectious.

She was always willing to answer a question, share a lead, source a photo, and people like her are the unsung heroes of the work of authors, like Steve Johnson and I, who get the attention. Kudos to the folks at the Pro Wrestling Historical Society who did an interview with Peggy in 2014. 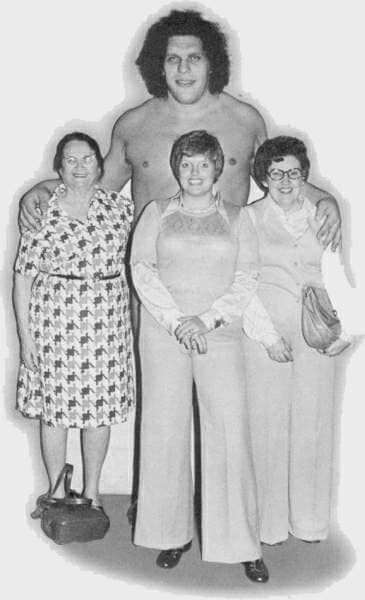 That’s Peggy Lathan in the front. You might recognize the big guy, Andre the Giant, in the back.

There’s a lot of her work on the Mid-Atlantic Gateway website, and the photos of the wrestlers away from the ring are what make them special. In her Ric Flair gallery at the site, there are lots of photos of his robes, but it’s the backstage shots where he’s goofing around with someone’s he comfortable with that show a different side to The Nature Boy.

Her photo galleries from fan fests, especially those in and around Charlotte, were must flip-throughs for me when she posted them on Facebook. Ditto her albums from the Cauliflower Alley Club reunions.

The last few years have been tough on us all, and time after time, Peggy was posting about losing family and friends, well known and not. Her last posts were concern about her father, hospitalized with COVID, less than a year after losing his wife. Then Peggy tested positive for it too — and they both had their vaccinations. “Well when it rains it pours. Now I am in the hospital along with Dad. They said my labs were all out of whack. Don’t know how long I’ll be here yet,” she wrote on August 9. 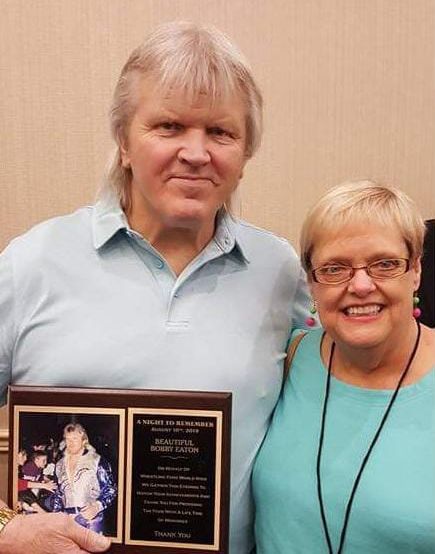 Bobby Eaton was a pal. “I am at a loss of words over the passing of Bobby Eaton. He was a good friend for a long time and this has hit me hard. Bobby was one of the sweetest people I knew. Bobby, you will be missed by so many. RIP my friend. My sympathies to your family and friends,” she wrote of Facebook. There was Chris Youngblood, “The Patriot” Del Wilkes … it’s a long list.

Don Kernodle, who died by suicide back on May 17, was another.

She wrote into the Mid-Atlantic Gateway, sharing details of her friendship with Kernodle:

I first began going to the matches with my mother and grandmother in Greenville, SC in 1968. Johnny Weaver was one of the first wrestlers I met, talking to him as he stood by the back wall watching matches. Back then, the wrestlers would stand in the back and sign autographs and pose for pictures. Johnny was my favorite and while chatting, I told him about our three generations attending the matches.

One night in 1973, Johnny told Don about the three of us, and Don wanted to meet my family. He was fascinated about three generations all attending the matches together, the same seats, every week. That was the beginning of a long-time friendship.

Don hit it off with my grandmother. Nannie loved Don, she would cheer for him and was his biggest supporter. Don would make her so happy. I remember several times, the bad guy would throw Don out on the floor and he would land right at my grandmother’s feet. I’m sure Don would plan it that way. He would look up from the floor and plead, “Help me Nannie, help me! Don’t let them hurt me, Nannie.” She would reach down and pat him on the back or the shoulder, and as the bad guy approached she would ball up that fist and threaten to whip them if they got near Don. “Oh, thank, you Nannie, thank you,” Don would say.

Don and I had many good times together. We went to the beach several times with Johnny Weaver, Don’s brother Wally, and other friends. We attended races, had cookouts at Johnny’s house, attended matches and just enjoyed being together doing fun things. I’m really going to miss those times and all of the phone calls and cards.

A native of Liberty, South Carolina, who was born on April 28, 1952, Peggy loved her Clemson Tigers … maybe as much as wrestling? She loved small-town life, noting often that there were about 3,000 people in Liberty and that there were two traffic lights.

The fans that really meant something to the wrestlers in a territory are a thing of the past, and seeing them go is tough.

Rest easy, Peggy. You will be missed.

EDITOR’S NOTE: Peggy Lathan’s date of birth was added to the original story.

TOP PHOTO: Peggy Lathan and Ole Anderson at a fan fest in August 2016.