‘The Patriot’ Del Wilkes dead at 59 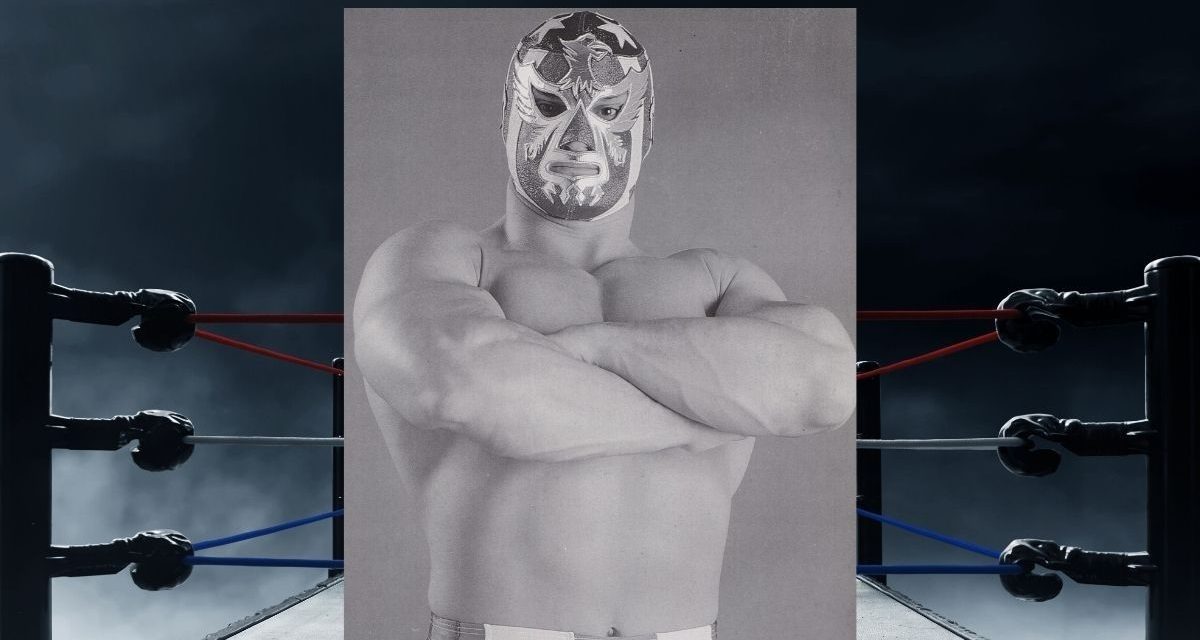 Del Wilkes, who gained fame in WWE as The Patriot, has died today, July 1, of a heart attack. He was 59.

The news was broken by Mike Mooneyham, of the Post and Courier newspaper in South Carolina, where Wilkes had been a star with the University of South Carolina football team.

Wilkes was active on social media and hosted a podcast.

Born December 21, 1961, he was an offensive lineman at Columbia’s Irmo High School, and was heavily recruited. Playing with the USC Gamecocks, Wilkes was “one of only four consensus All-American football players in program history (along with George Rogers, Melvin Ingram and Jadeveon Clowney), Wilkes bolstered an offensive line that in 1984 helped set school records for touchdowns (49), points (371) and total offense (5,095 yards),” wrote Mooneyham. At his biggest, Wilkes was 333 pounds on his 6-foot-3 frame.

Steroids were an early part of his physique, and Wilkes was very outspoken about the use of drugs in his career and hoped others would not make the same mistakes.

With an NFL job not in the cards — tried out for the Tampa Bay Buccaneers in 1985 and Atlanta Falcons in 1986 — he turned to the local pro wrestling legend, “The Fabulous Moolah” Lillian Ellison for his initial wrestling training.

In a 2015 interview with Marc Madison, Wilkes, noted that Moolah “was my only option. I live in Columbia, South Carolina and I’ve lived here all my life. Moolah had also been here all her life, and from a school standpoint hers was my only option.”

He did add that it wasn’t necessarily the right fit for him:

While I learned some basics, I don’t think that I got a lot of valuable training there. I learned how to put on a headlock, how to work an arm, and how to take bumps. Other than that I didn’t learn a whole lot because it was geared towards girls. Back when there were job guys, enhancement guys, and she would occasionally send them up to do TV for Vince (McMahon) and put somebody over in a couple of minutes. So, they were pretty limited in what they knew about psychology and things like that. They knew the basics of how to lock up and do physical things, but from the psychological standpoint of it, they didn’t know that because they had never been taught that. But it was a valuable learning ground for me. It did get me in front of small crowds in the middle to the end of South Carolina, and showed me how to do the physical aspects of it.

Next, Wilkes went to Verne Gagne in Minneapolis, and progressed quickly, learning the skills he needed to becoming a better wrestler.

In the dying days of Gagne’s AWA, Wilkes was “The Trooper.”

“They liked me in that role as I had a bit of a squared jaw, and I guess the chiselled features of my face at that time made me look like a law enforcement officer. I had a southern accent, so they envisioned me as this southern police officer,” recalled Wilkes to Madison. “So, they laid out how they wanted me to go out to the ring and pass out little plastic badges, and after the match leave a ticket on my opponent’s forehead. I was wearing the cop hat, the cop belt, the handcuffs, the flashlight and all those things that were so much a part of that. They gave the character to me and had tweaked it a little bit; if we had more time, I think we could have tweaked it even more. Unfortunately, I went to the AWA when they were truly on life support.”

Wilkes then became “The Patriot,” wearing a mask and waving the American flag, capitalizing on the end of the first Gulf War. It was a hit both in Japan and in the WWE, as well as in WCW and the lesser-known Global Wrestling Federation.

But it was GWF that got him to Japan, Wilkes noted to Madison. “Global didn’t have the financial resources to compete with WCW and the WWF at the time. Then, I parlayed that into an opportunity with All Japan Pro Wrestling, where again I worked on top, with (Stan) Hansen and (Terry) Gordy and (Steve) Williams and (Kenta) Kobashi, so it was a character that did develop every stop along the way and every company that I worked for. Listen, it could have evolved even more, but again, the lack of good health and the major injuries that I sustained by working in All Japan just limited my time in the WWF, in having any long-term staying power. The body just failed me.” 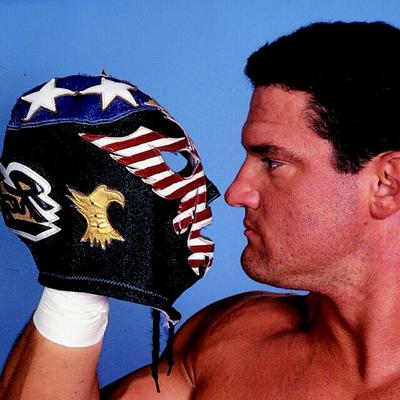 In 2012, Wilkes shared his memories of another football star turned wrestler, Doug Furnas, with SlamWrestling, who he bonded with in Japan.

“He and I got to be real close, best friends. We ate together every night, we went out to the restaurants. Most nights we would just fix something there in my room, and just sit around and talk, sometimes to 2, 3, 4 o’clock in the morning. We worked out together. One thing about working in Japan that’s different than the States is in the States everybody sort of goes their own way while they’re out on the road. There, you ride the same bus, you stay in the same hotels. With Doug and I, we worked out at the same gyms, we ate at the same restaurants, we went to see movies. It was almost like a husband and wife deal (laughs). We were always together and developed a very good friendship.” Wilkes was later the best man at Furnas’ second wedding in 1995.

There were plenty of other wrestlers who Wilkes got to know through the years. In an April 2016 Facebook post, Wilkes wrote about The Rock Dwayne Johnson:

When I was in the WWF, me, Rock and DLo Brown traveled together. At that time I had been in the business a good bit longer than those two and was a more established name (we know that changed big time). The three of us did everything together, eating, training and tanning. I was with Rock the day he got the bull tattoo. They would never let me drive because I was the vet of the group. That was their way of showing respect. One day we were running late for a show. Rock is driving, DLo is in passenger seat and I am in the back seat. Rock hits a curb and we have a blowout. We pull over and start unloading the trunk of our luggage so we can get to the spare and jack. It was a hot summer day and Rock looks at me and says Del there is no way your are changing this tire. You logged many more miles on the road than we have, go sit under that shade tree while we change the tire. You are the vet so go sit down and relax while DLo and I do this.

In the late 1990s, Wilkes stepped away from pro wrestling due to a triceps injury. WWE ended his deal with him in 1998 because of all the injuries.

Wilkes knew that steroids played a part in his constant physical issues. In a 2004 article in USA Today, Wilkes said that he was taking steroids, pain pills and muscle relaxants, and sleeping pills, and that, from 1997 to 2002, he was arrested 20 times for using fake prescriptions. In 2002-03, he did a nine-month prison term — for a parole violation — that helped him break free of the constant pill use.

He walked out of the South Carolina prison on Valentine’s Day 2003. In his interview with Madison, Wilkes noted that “I’ve had a completely different life. I’ve been clean, so my life has been good. It wasn’t until a couple of years ago that I had reached out, or maybe the wrestling business reached out to me, and I’ve had the opportunity to start making some personal appearances. To get more involved in the business in that capacity.” 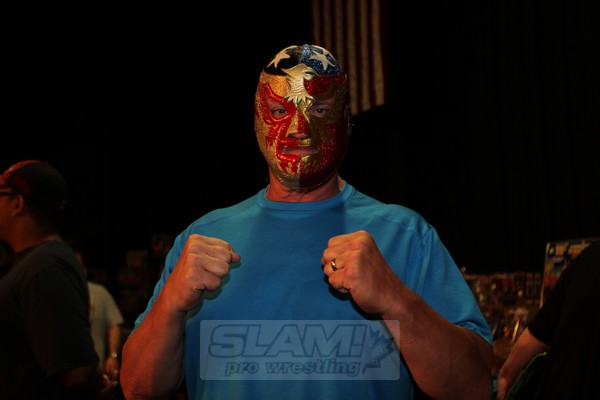 Del Wilkes in August 2017 at a fan fest. Photo by George Tahinos

Wilkes released a DVD on his life, Behind The Mask: Del The Patriot Wilkes, and did a podcast with Avi Klein. He was also a part of the 2007 CNN documentary, Death Grip: Inside Pro Wrestling and HBO’s Real Sports with Bryant Gumbel from 2003.

Recently, he had been a car salesman in Columbia.

He had three children, and was married twice.